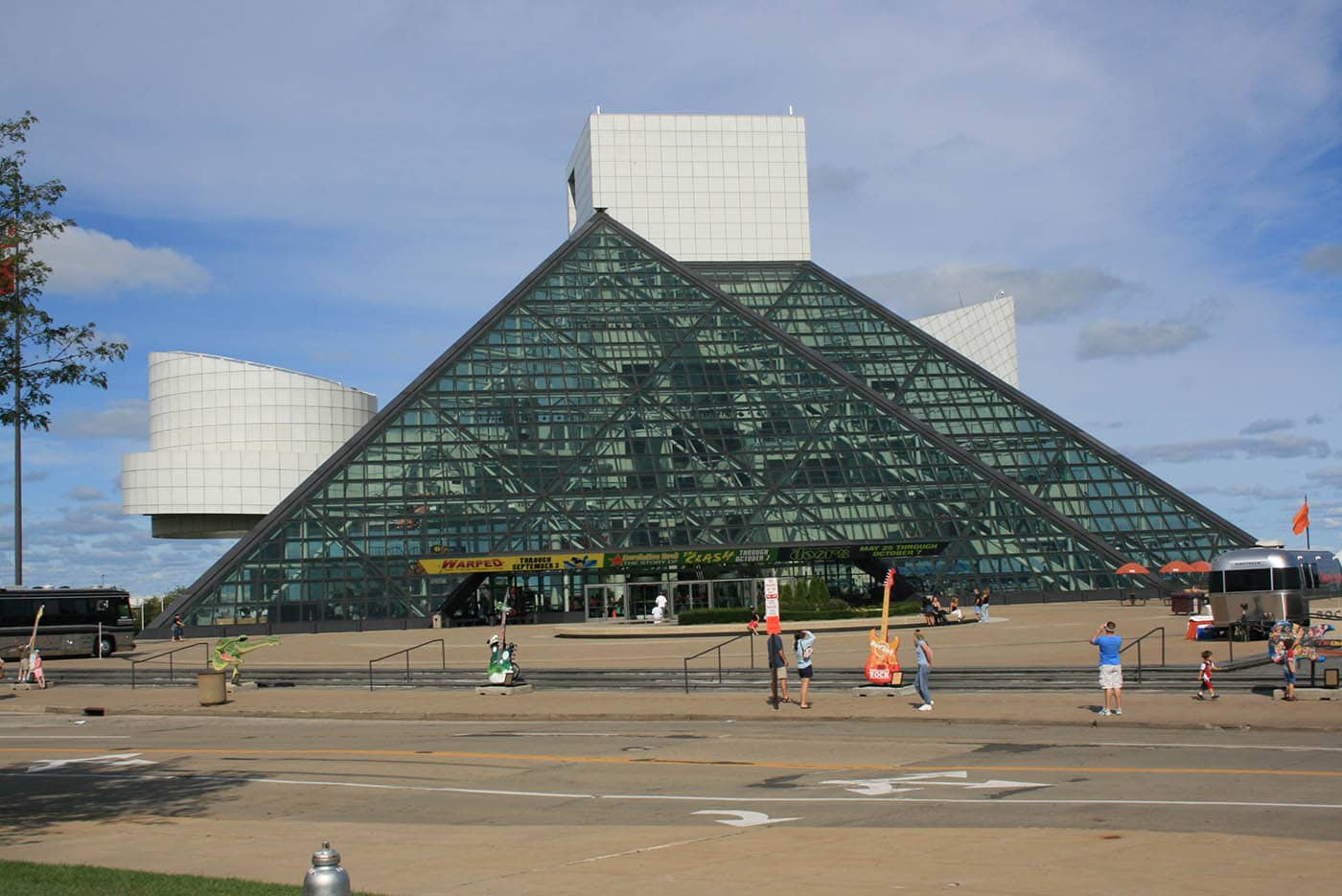 Nadia picked me up and then we headed off to Cleveland, Ohio! OK…sort of… First, we took a pit stop at Freddy’s (it was basically on the way). Nadia indulged her childhood memories of thick pizza squares and some limoncello gelato…I got myself a fried artichoke (YUM) and some pistachio gelato (DOUBLEYUM). 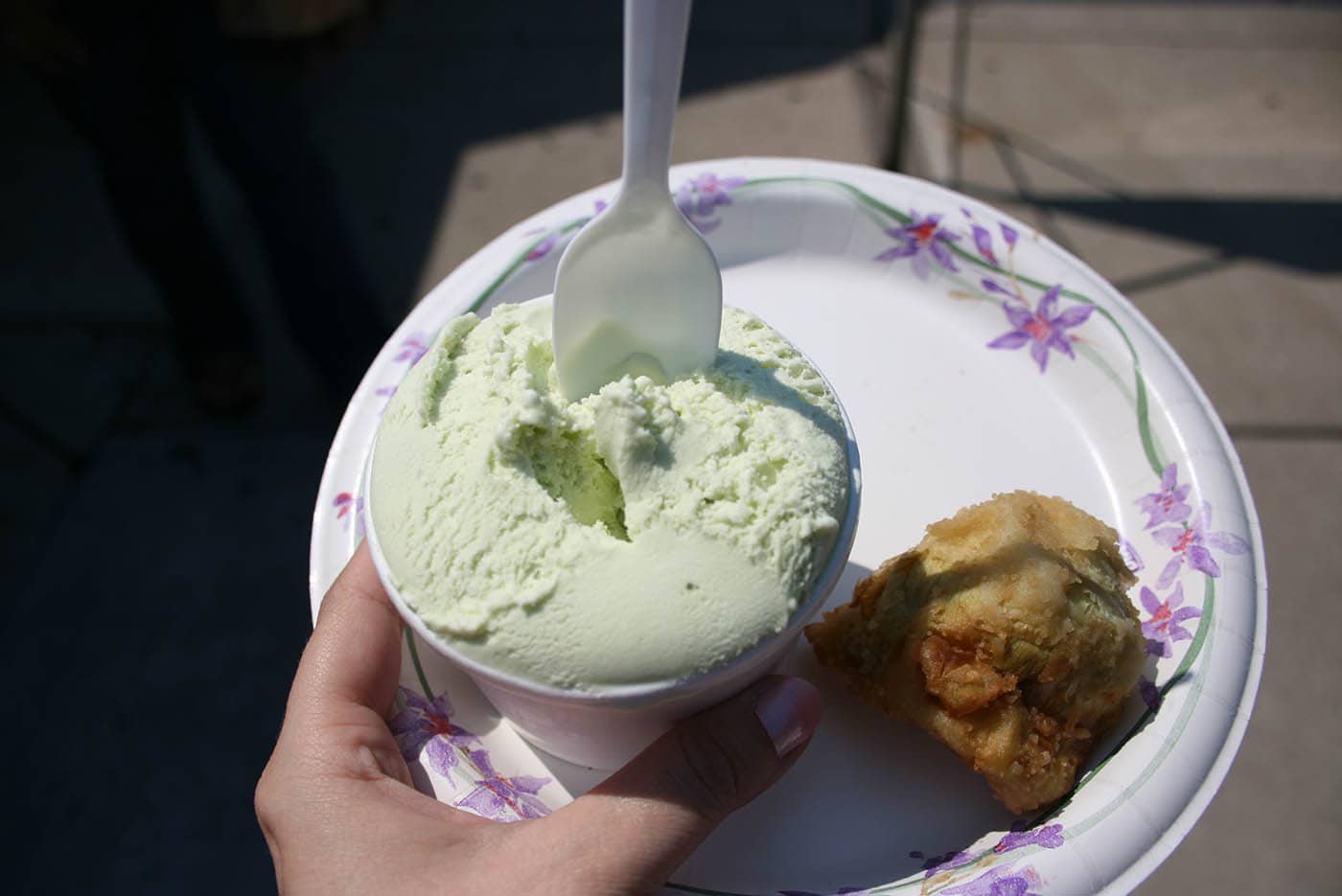 Then we headed to the city to pick up the boys (Bryan and Jim) and swap cars and then we were finally actually off to Cleveland!…But not before driving around the city for about 20 hours and stopping at the Skyway McDonald’s (I’d never even known that that place existed until earlier this year. It’s a McDonald’s…smack dab in the middle of the highway. And it’s kind of scary.) 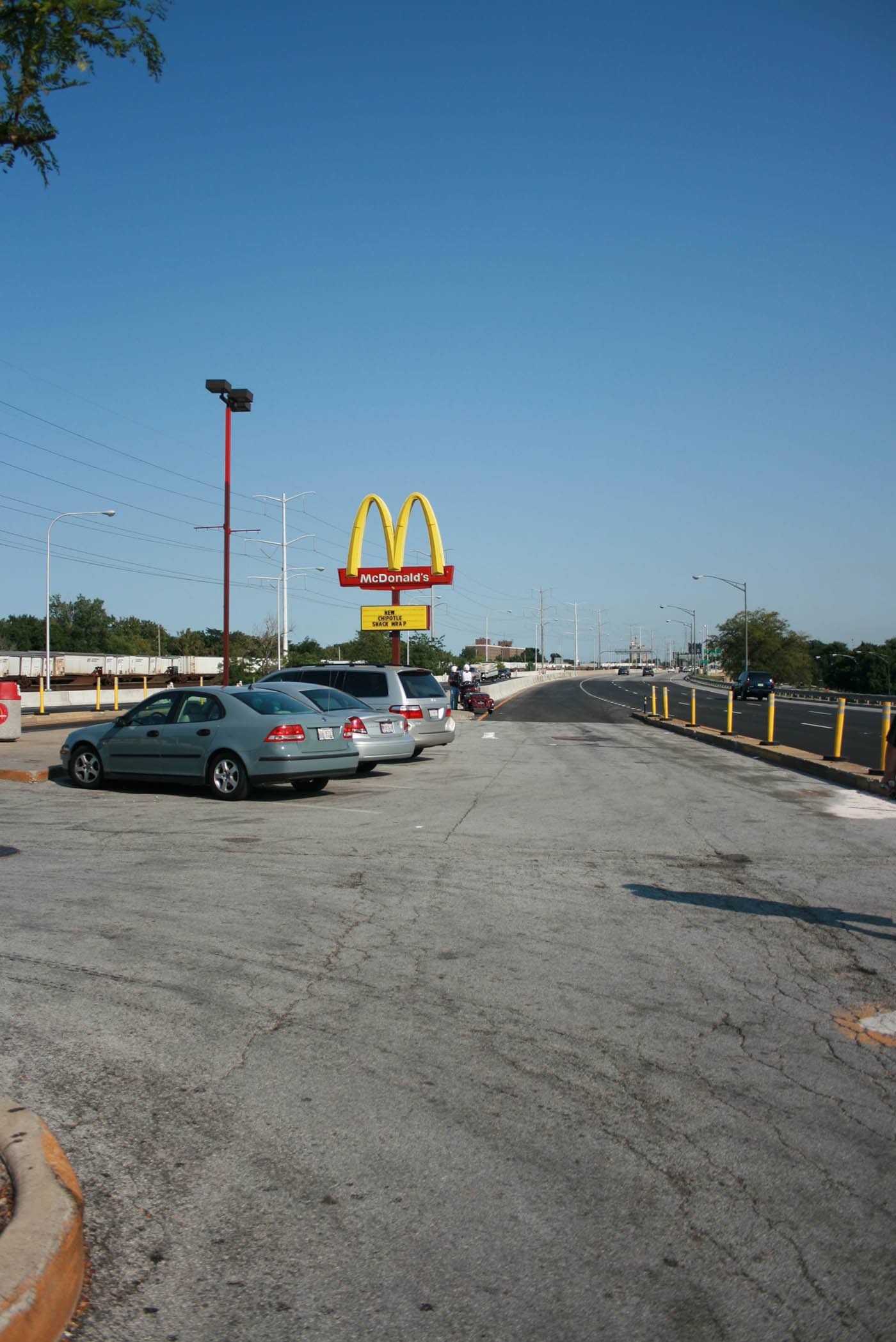 So then we were finally finally actually off to Cleveland! On the way we discovered the great musical stylings of cereal (otherwise known as a promotional Halloween CD from General Mills that was in the car for some reason…catchy stuff), sang aloud to Kelly Clarkson (at least Jim did), utilized ghetto Mapquest, stopped at a gas station that accepts cereal as payment, and ate some symbolic Cheetos (because I wouldn’t let anyone eat anything orange on my Illinois road trip). 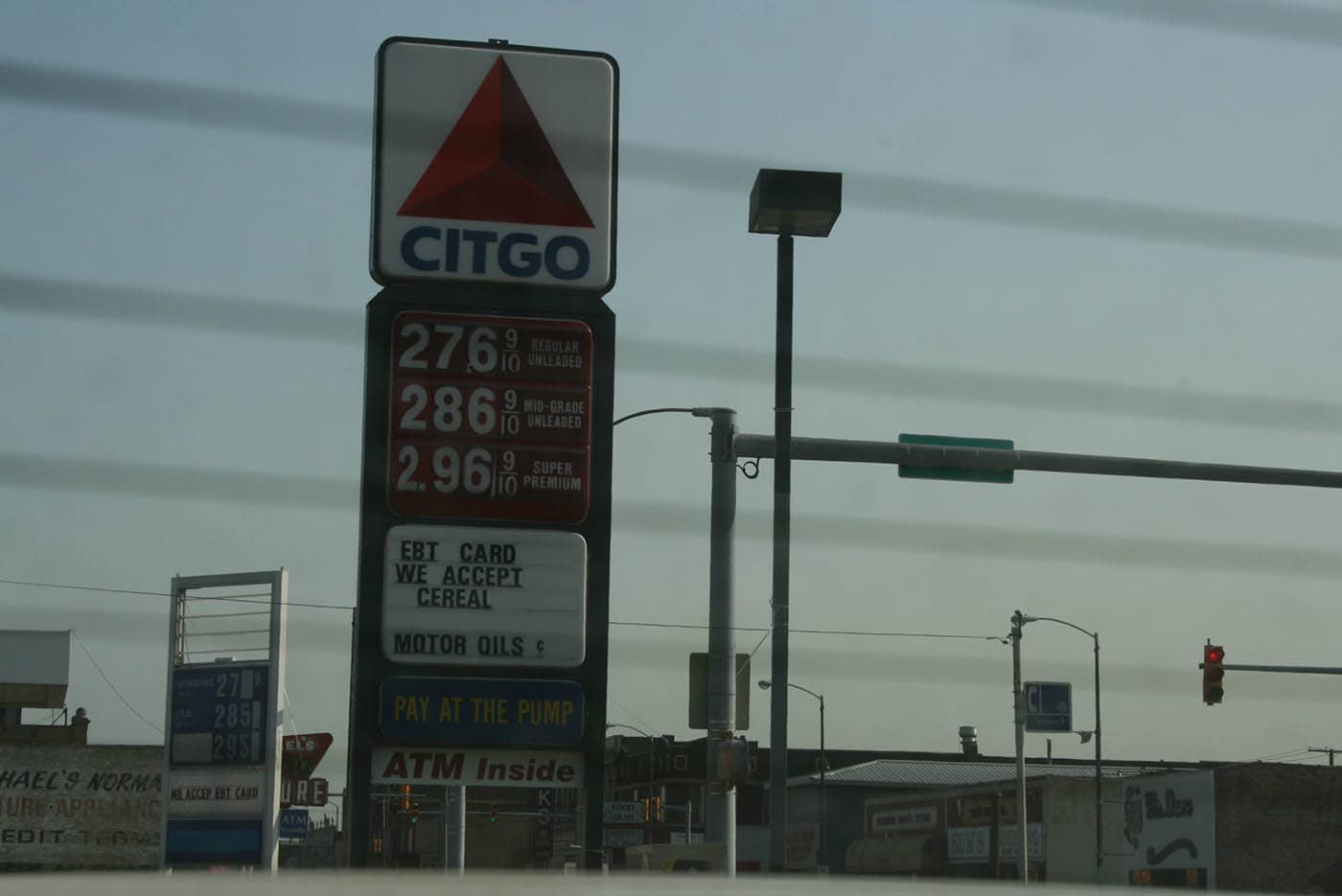 Then we finally made it to Cleveland!!!!

We checked into our hotel and asked the desk clerk for suggestions on anything that would be open at 11pm in the somewhat-deserted at that time of night downtown area that would still have dinner. The guy rattled off a few places but he was hard to understand because of his “off Cleveland accent” (aka, Jamaican). Then some random dude told us he’d take us in his limo. Nad and I declined and Bryan whined but we weren’t about to get into some random dude’s random limo.

We walked a couple of blocks and came across the restaurants that we think the Jamaican dude was telling us about, but, surprise surprise, they were all closed.

Luckily one of the places that looked like it was just going to be a bar and was open turned out to be a restaurant and so we ate and watched some Sox. I had a yummy steak and cheese and mushroom and onion sandwich on garlic bread with cheesy bacon fries (because I’d left my bird seed in the car). The garlic bread made the sandwich. Then we wandered back to the hotel, stopping to check out the guitars (like the Chicago cows) and Jacob’s Field, which was kind of right there in the open. 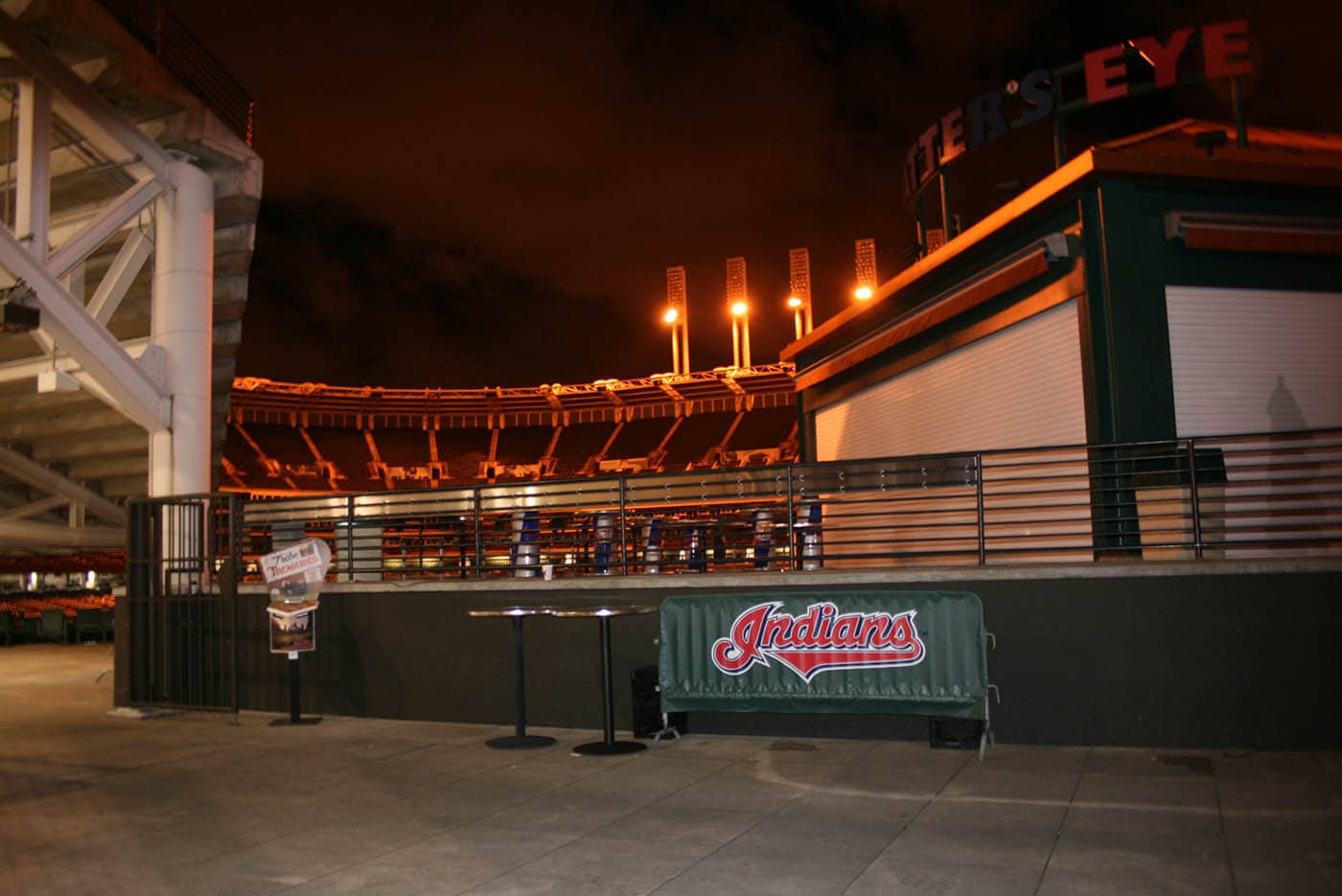 Saturday we headed out bright and early to go see the thing we actually went to Cleveland for in the first place…THE WORLD’S LARGEST RUBBER STAMP!!!!! 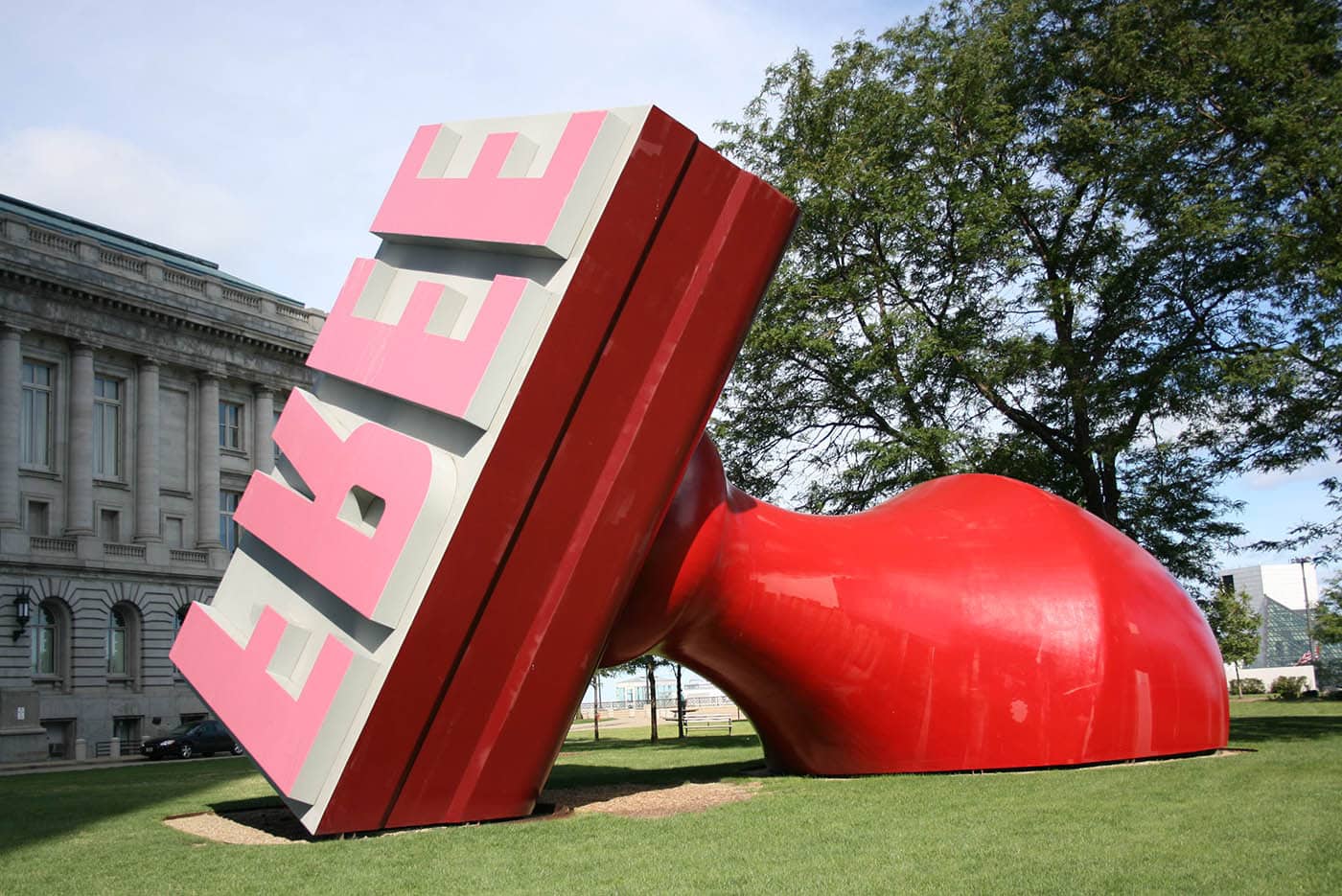 Ok, OK, so maybe it wasn’t the entire reason for going to Cleveland…but I think it’s awesome! 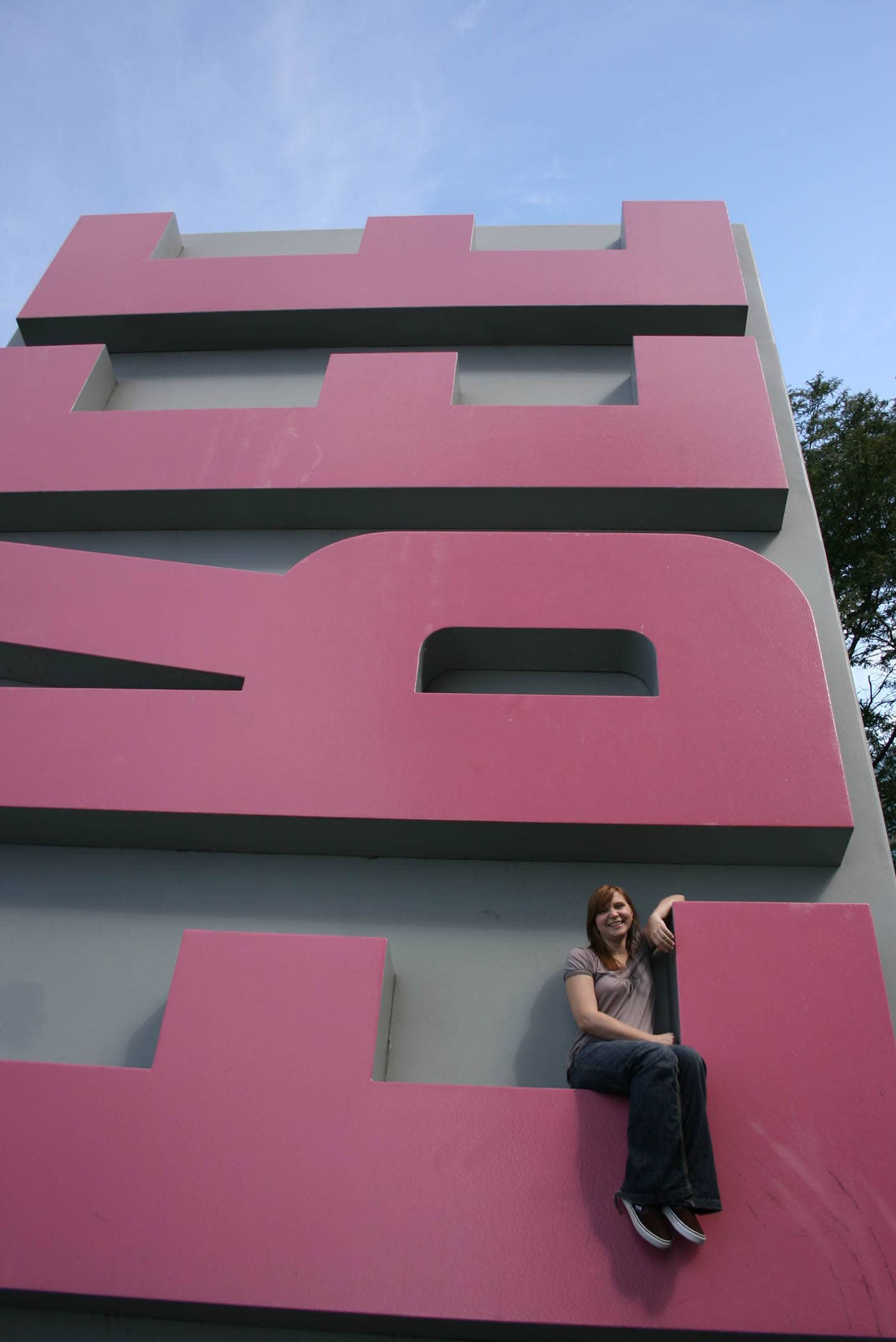 So after we pondered the greatness that is THE WORLD’S LARGEST RUBBER STAMP we headed off another block to see what I guess technically was our whole reason for going to Cleveland: The Rock and Roll Hall of Fame!

We basically went because we wanted to see the Warped Tour Exhibit. There was a Clash exhibit there too, which made it even better. 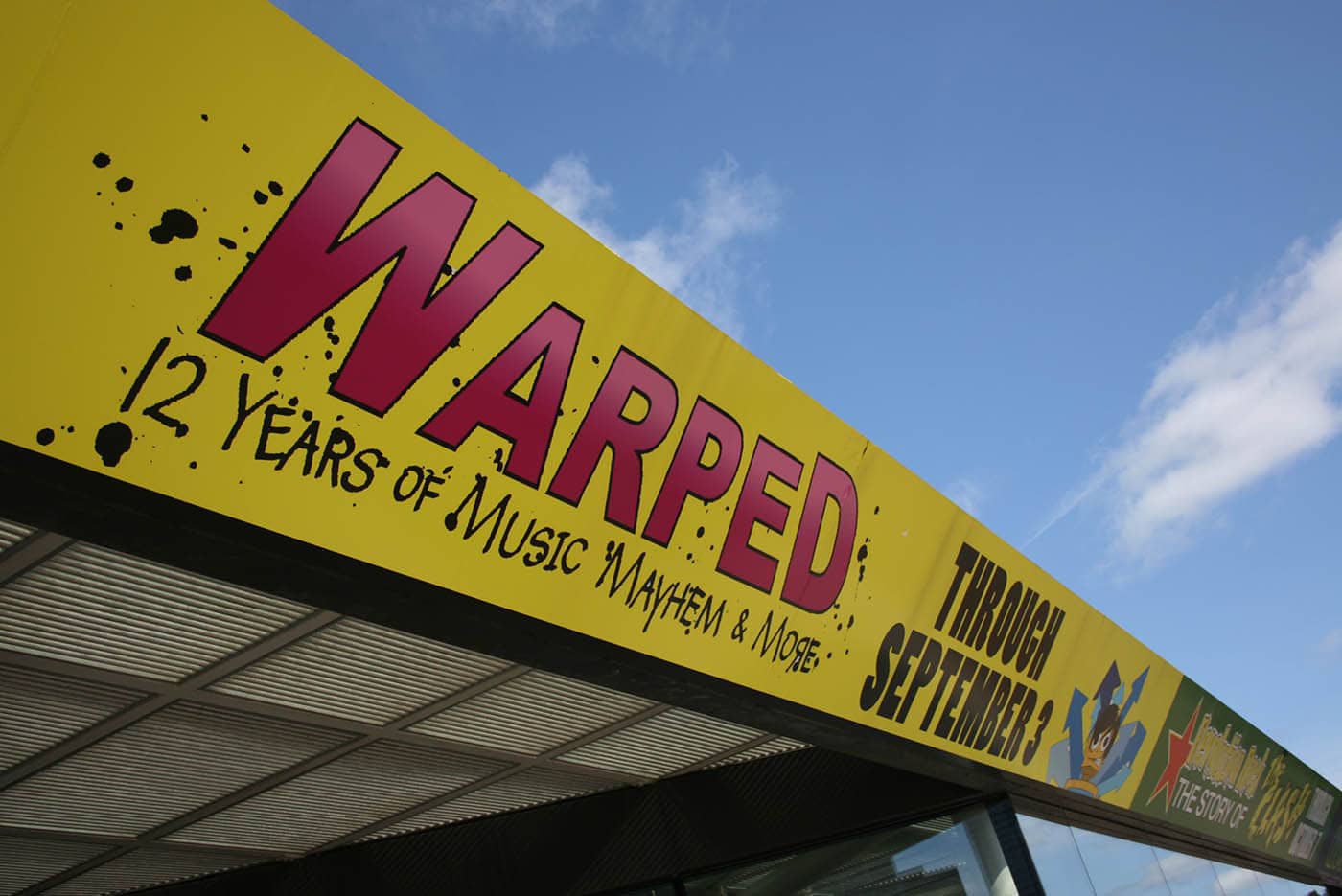 The Hall was pretty oddly laid out, but we got to see a lot of neat things (sorry, no cameras were allowed, so no pics for you 🙁 ). I liked it a lot because music photography is some of the most interesting photography you can find. I love it.

The Warped Tour exhibit was cool, especially the Lisa Johnson photography and some of the really random things they displayed (I especially liked the hair clippers used to keep the mohawks coming!)

Other hall highlights: Michael Jackson’s rotating glove, Madonna’s wardrobes that look really well made compared to others, wondering why the Monkees weren’t featured :(, wondering why the hell they had a special music of Ohio exhibit until we realized we were in Cleveland, Pink Floyd Wall, weird mesmerizing TV installation, the Hall, the Clash, hearing everyone who commented that they never knew the Clash had more than one song, what may be the World’s biggest Hot Dog, Fries, and Coke (The hot dog was actually used to fly Phish into a concert once)… 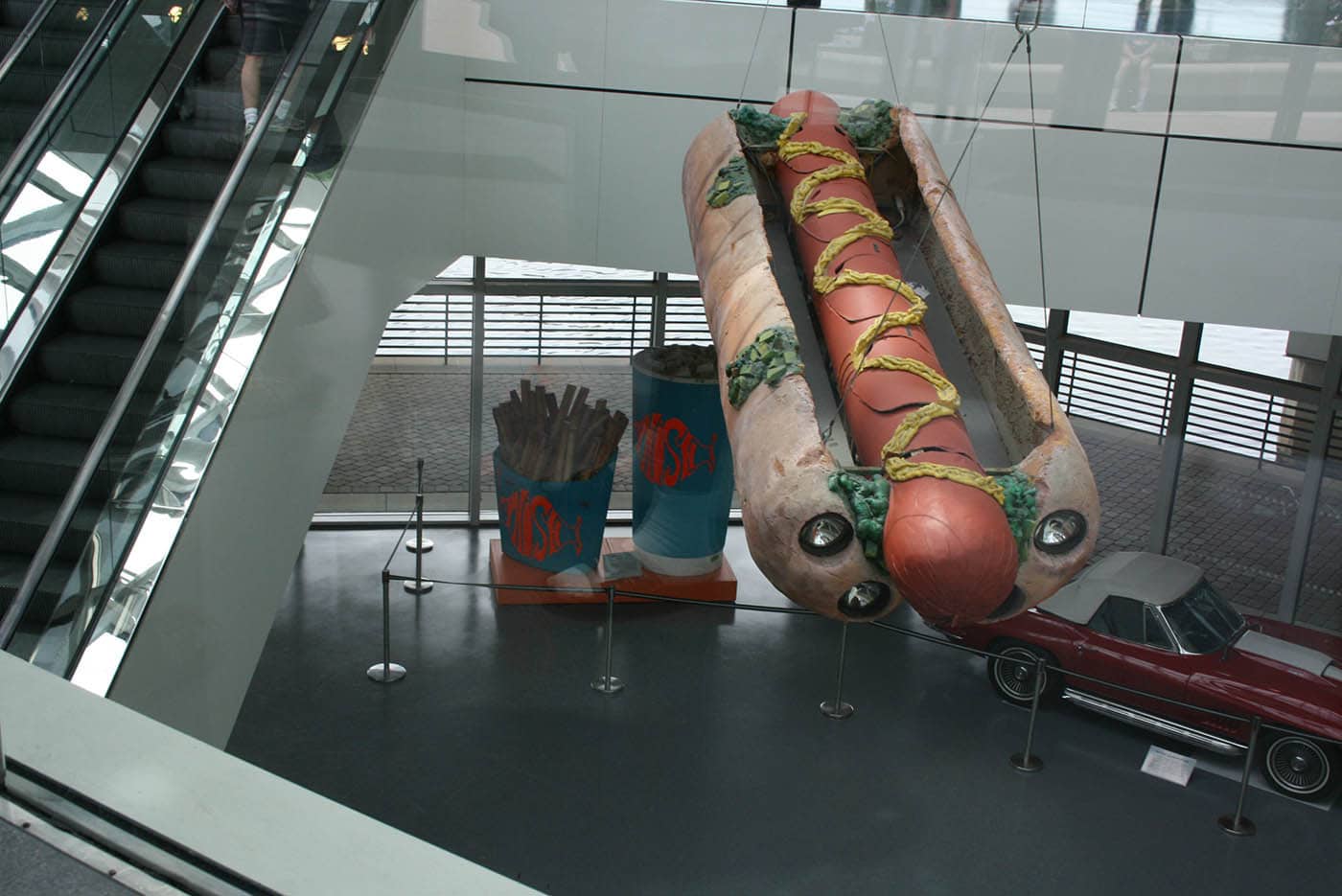 All in all, it was a pretty fun museum!!!

After the museum we headed back to the hotel to grab the car and then took off looking for the “house with the leg lamp in the window” and we found it!!! 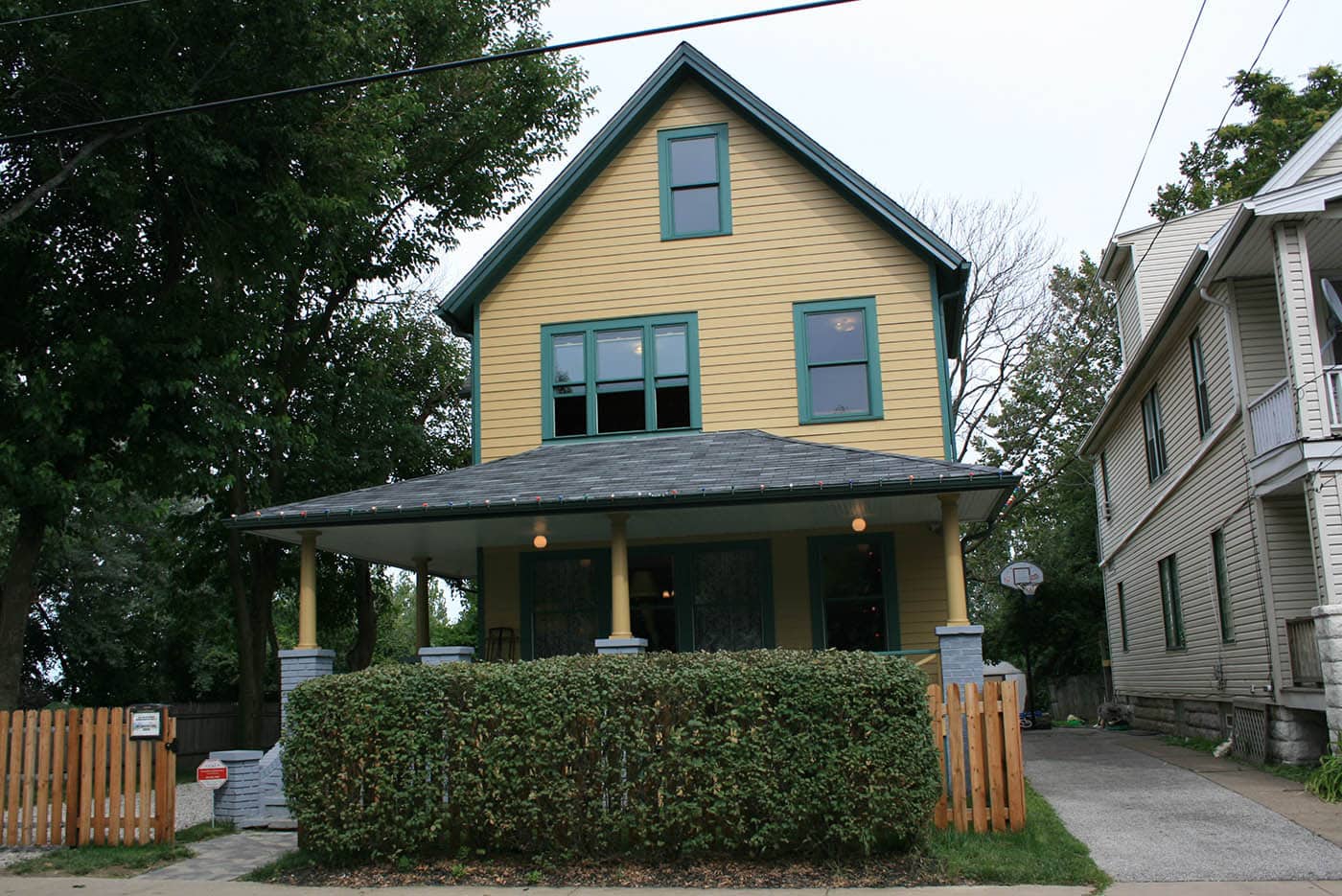 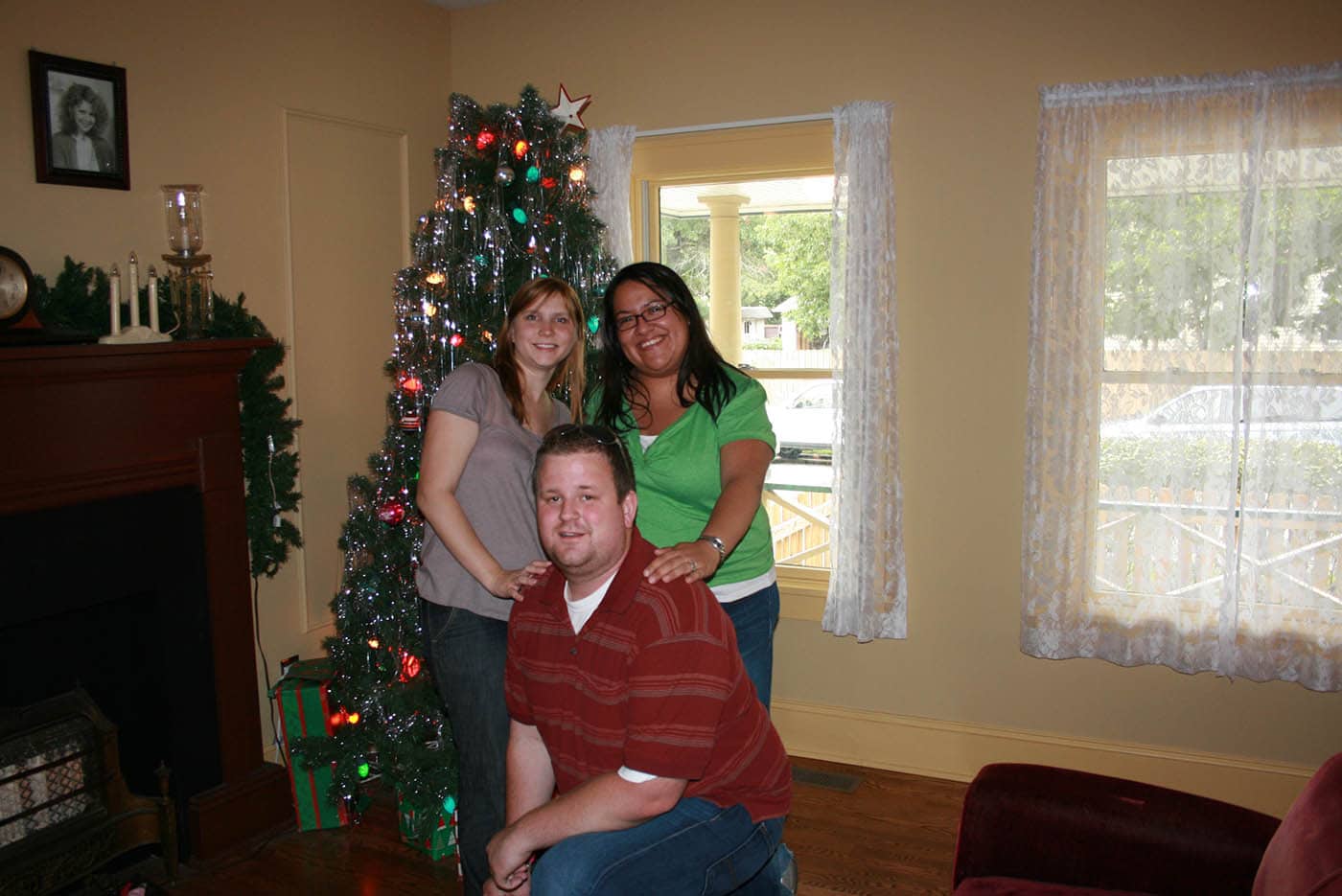 This was the house that they filmed “A Christmas Story” at. It’s apparently in Cleveland! Technically they just shot the outside scenes there. But some dude in California bought the house for over double its market value and fixed up the outside and did what he could with the inside to look just like it did in the movie. He also paid over double what the house across the street was worth to build a gift show and museum. Crazy.

It was kind of neat though. They fixed it up with everything from the leg lamp in the window, the turkey in the oven, the BB gun in the corner, soap on the ledge, and a Red Ryder comic on the bed. 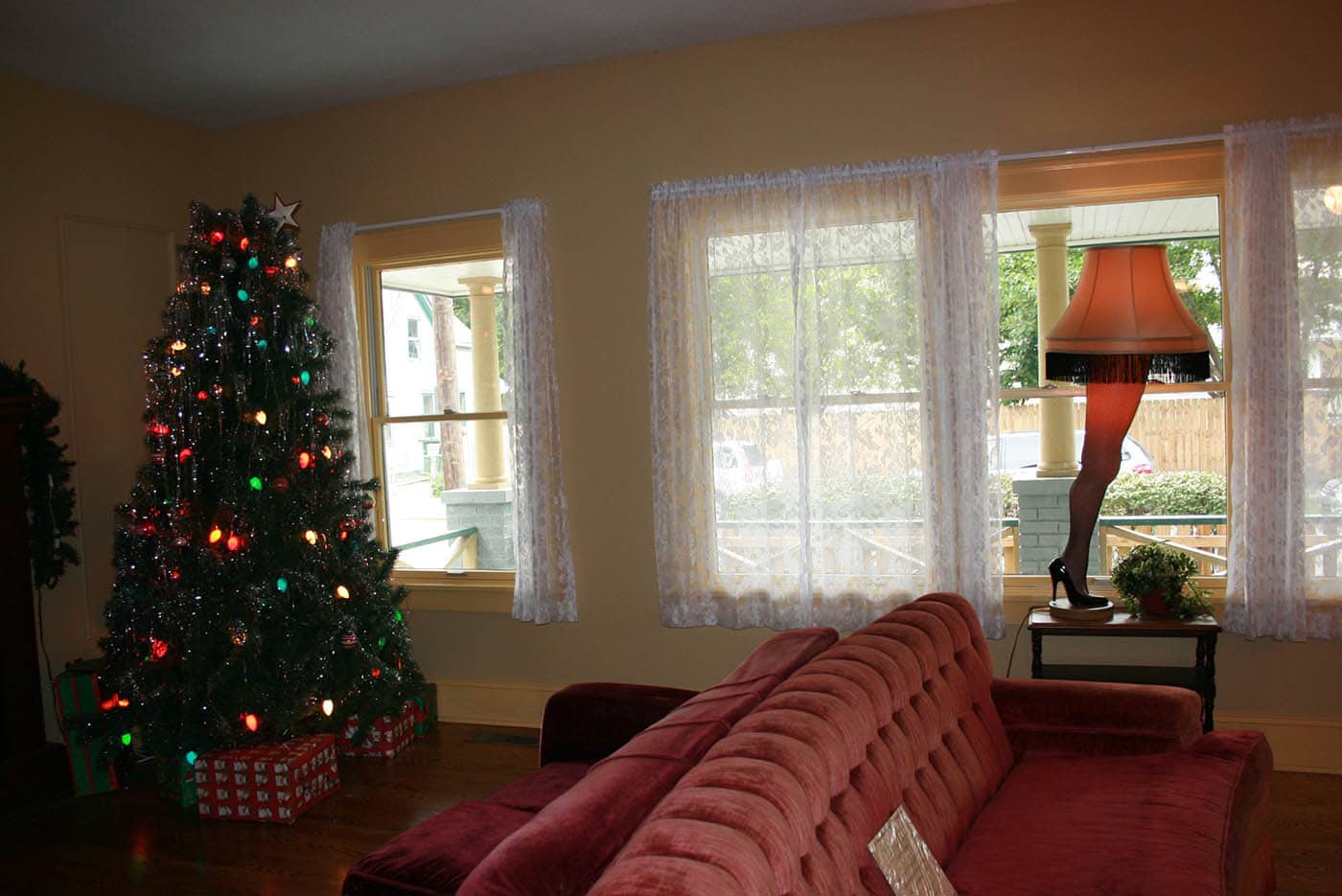 I can’t believe I paid $7 to see it, but it was totally worth it I say!

After the museum we wandered the market a bit, grabbed some yummy coffee, and went on a Brewery Tour of the Great Lakes Brewing Company! I’ve never been on a brewery tour before…not like I like beer, but it was still interesting. Especially since it was a small 25-person operation and not a giant beer conglomerate. They gave free samples (technically we had to pay a quarter to abide by the law). Notyum. 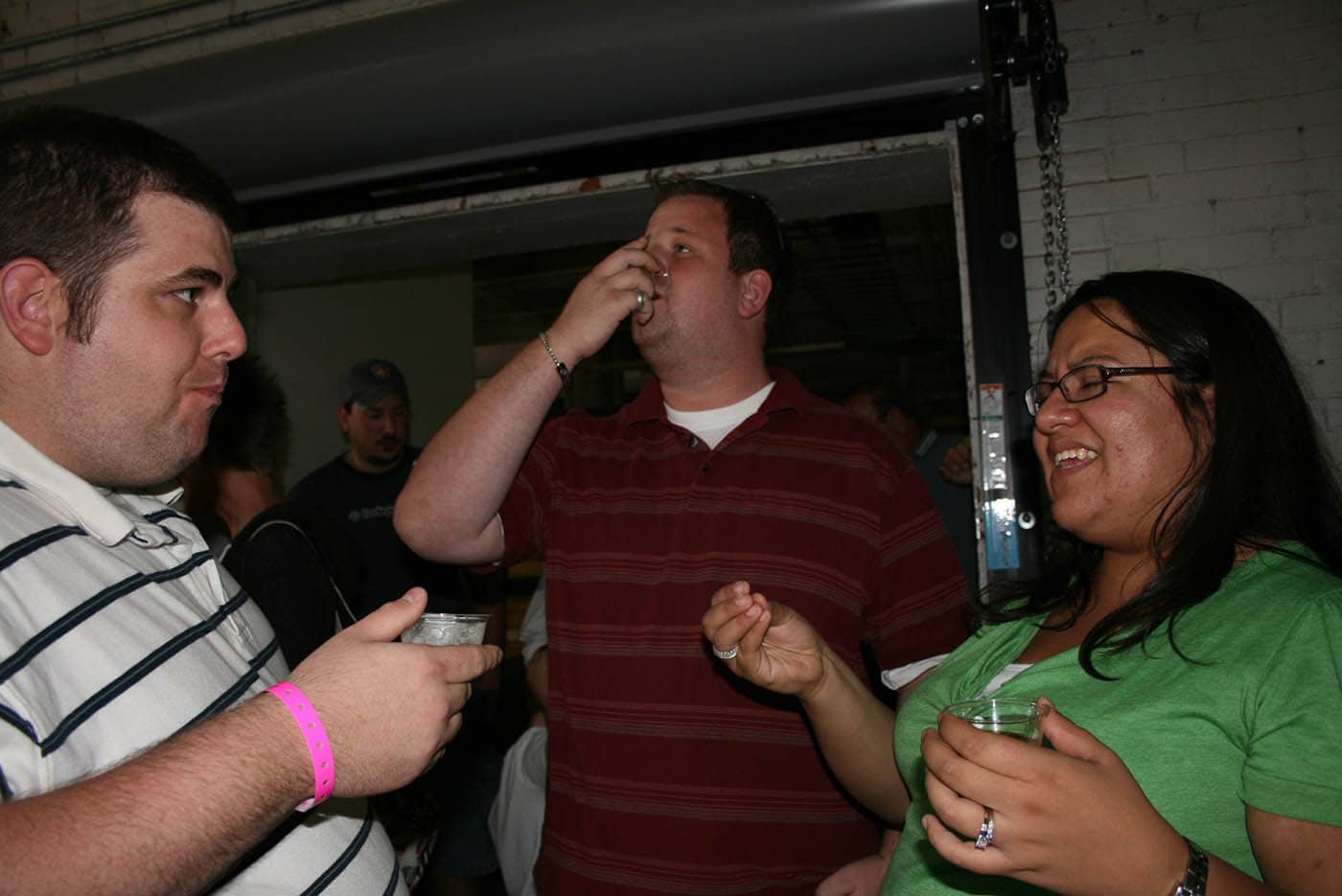 We did dinner at the Great Lakes Brewing Company restaurant. Nadia and Jim both partook in the beer sample…For $10 they got 4-5oz. samples of all nine beers that they had on tap. Since I do not like beer I ordered a Coke, but I wanted beeryness so I go the Stilton Cheese Soup that was made with beer (YUM) to go along with my Pretzel Chicken (I think there was beer in the mustard sauce too). 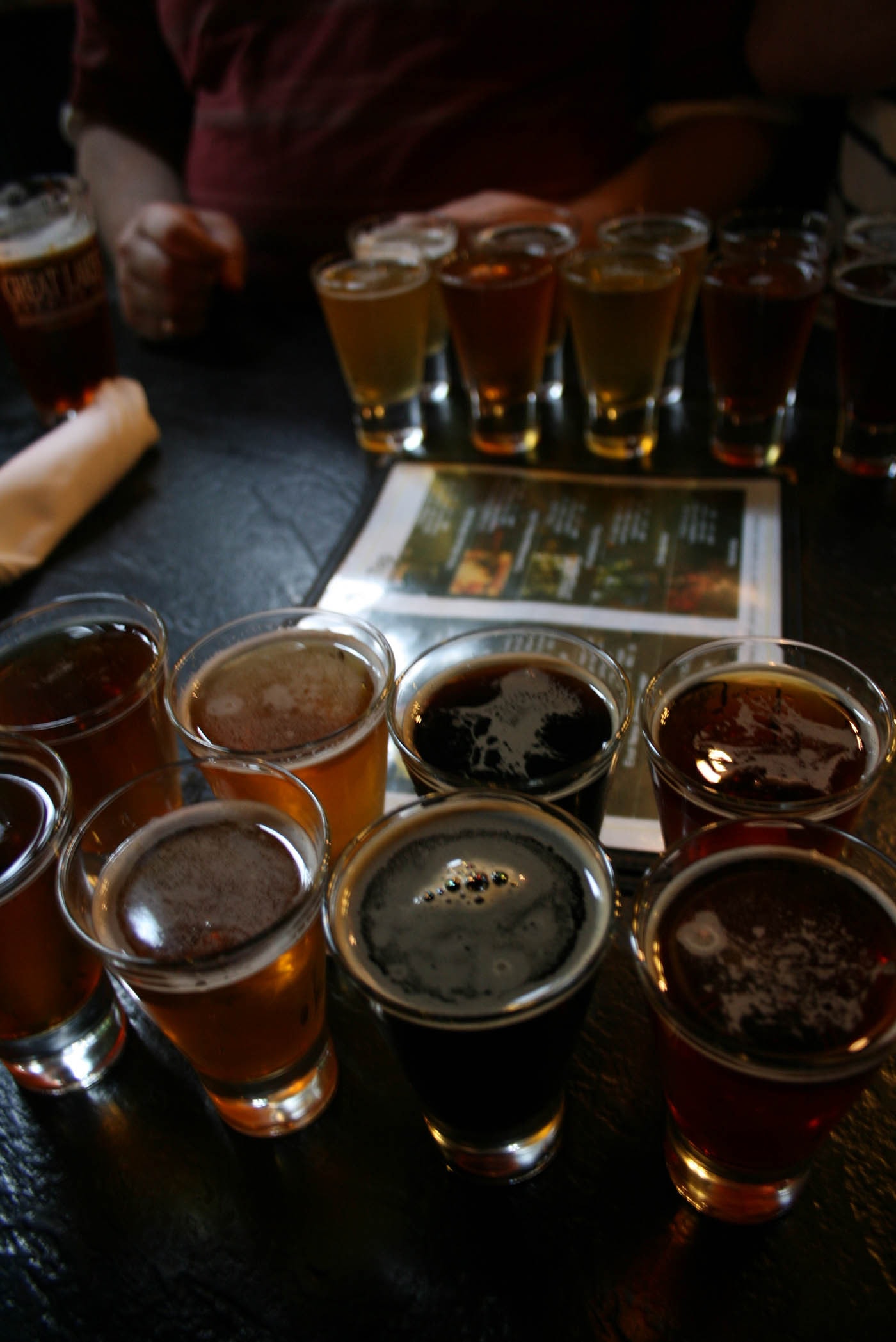 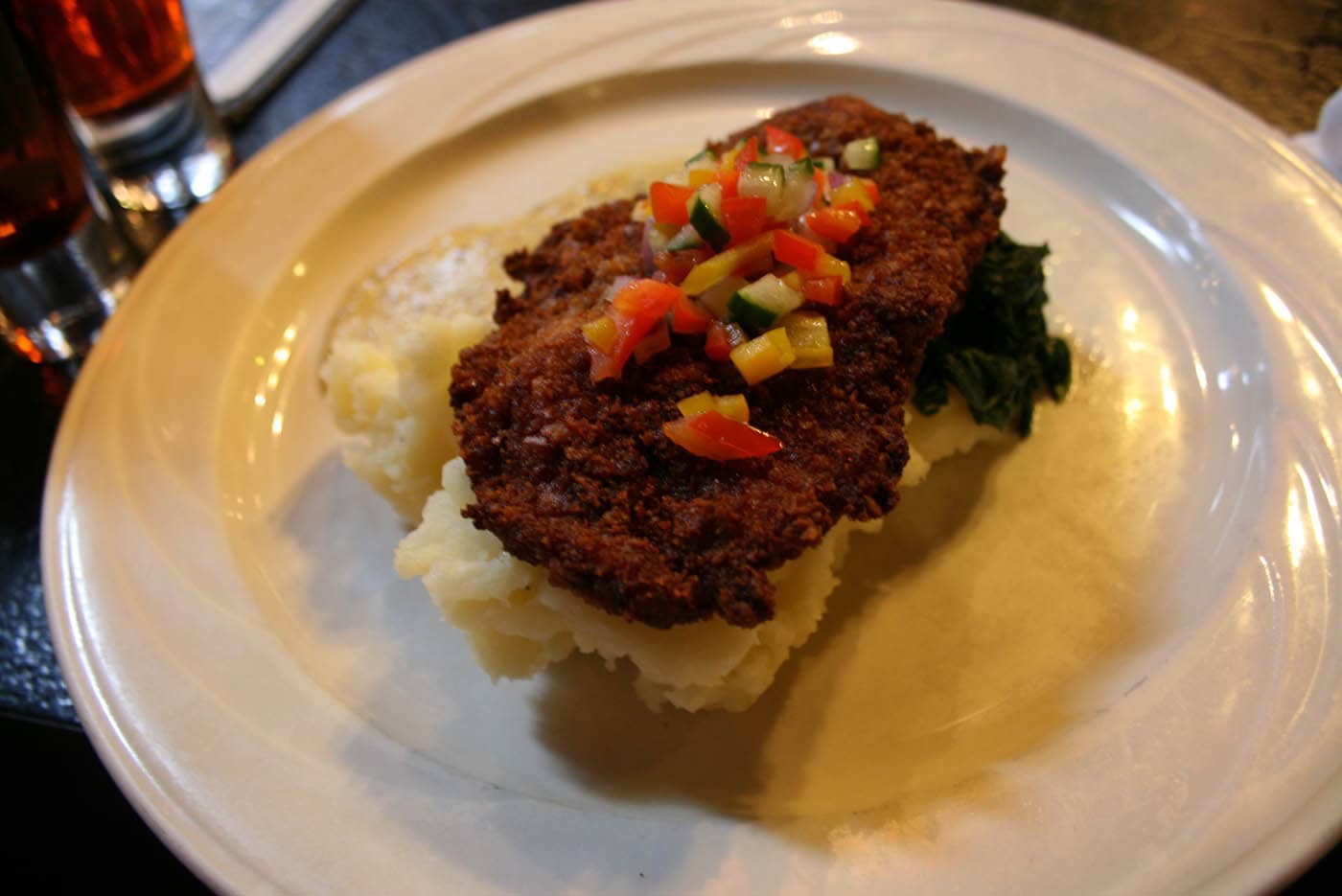 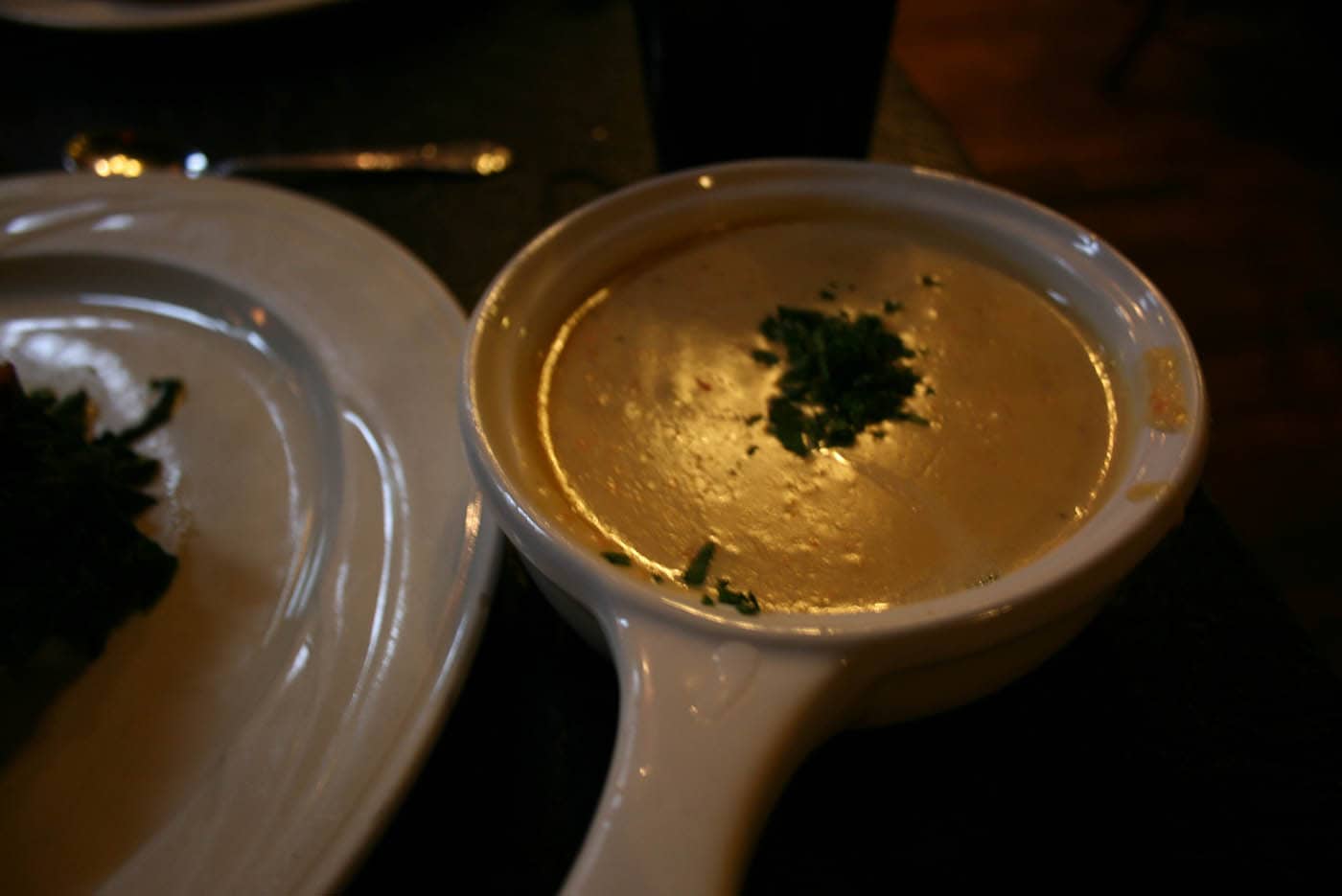 Jim said that I look like Luke Wilson. Which then resulted in the following conversation:

We capped it all off with chocolate chunk ice cream that was also made with beer (SOOOOOOYUMMMMM), who knew beer could give ice cream such a good taste!!!! 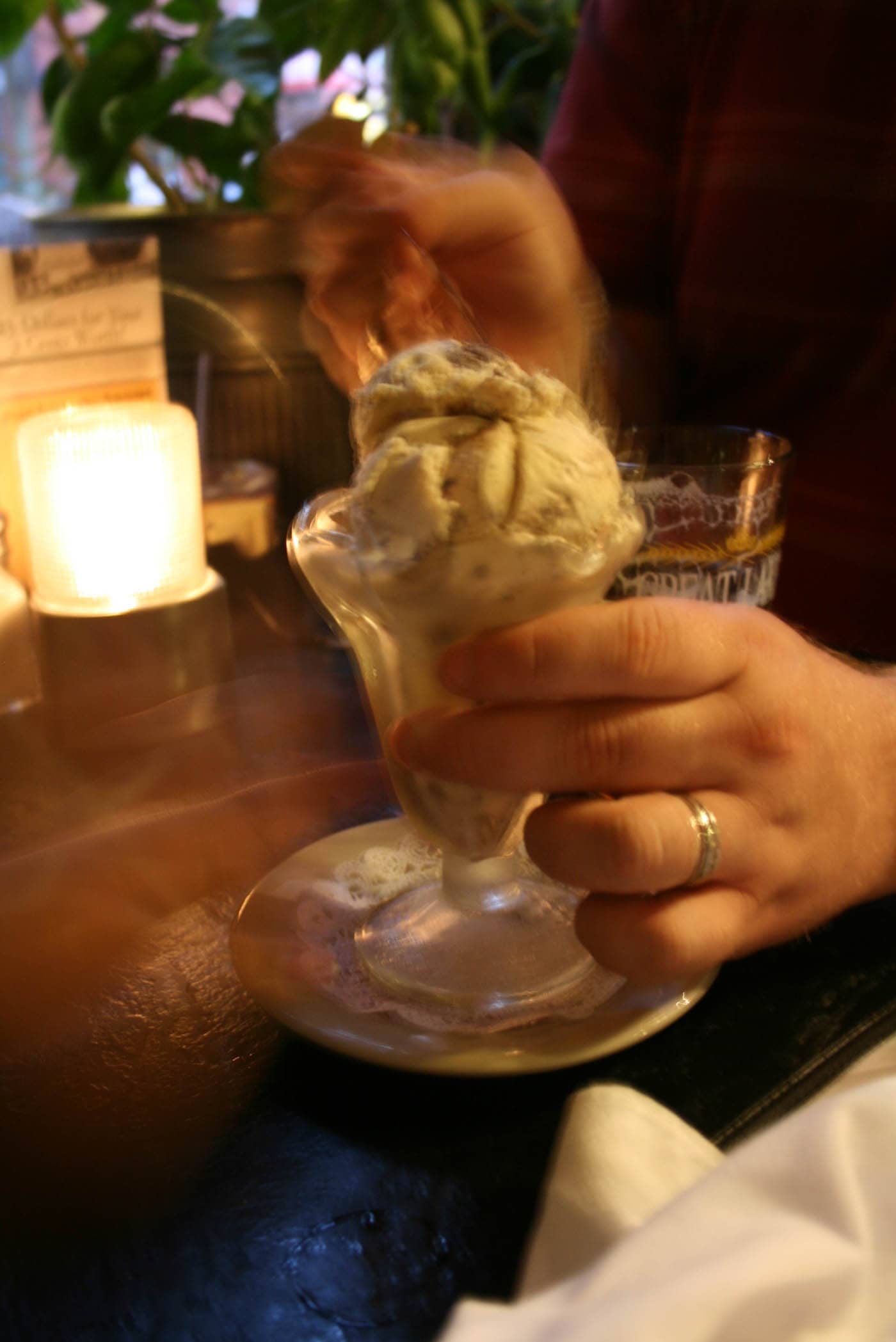 Sunday: Driving Back to Chicago

Before heading back to Chicago, we decided to check out the Cleveland Museum of Natural History. We saw Dinosaurs, and stuffed creatures, and glaciers, and earthquakes, and butterfly photography and Balto the Wonder Dog.

There was some dog training demonstration going on where they had doggies doing an obstacle course right in the middle of the museum. Of course, the doggies were in a smaller space and much closer to the crowd than they were used to so some of them got distracted. Like one who instead of going through the tunnel decided to come say hi to us, and then went into the tunnel, paused for a few moments, and then came back the same way. Toofunny. 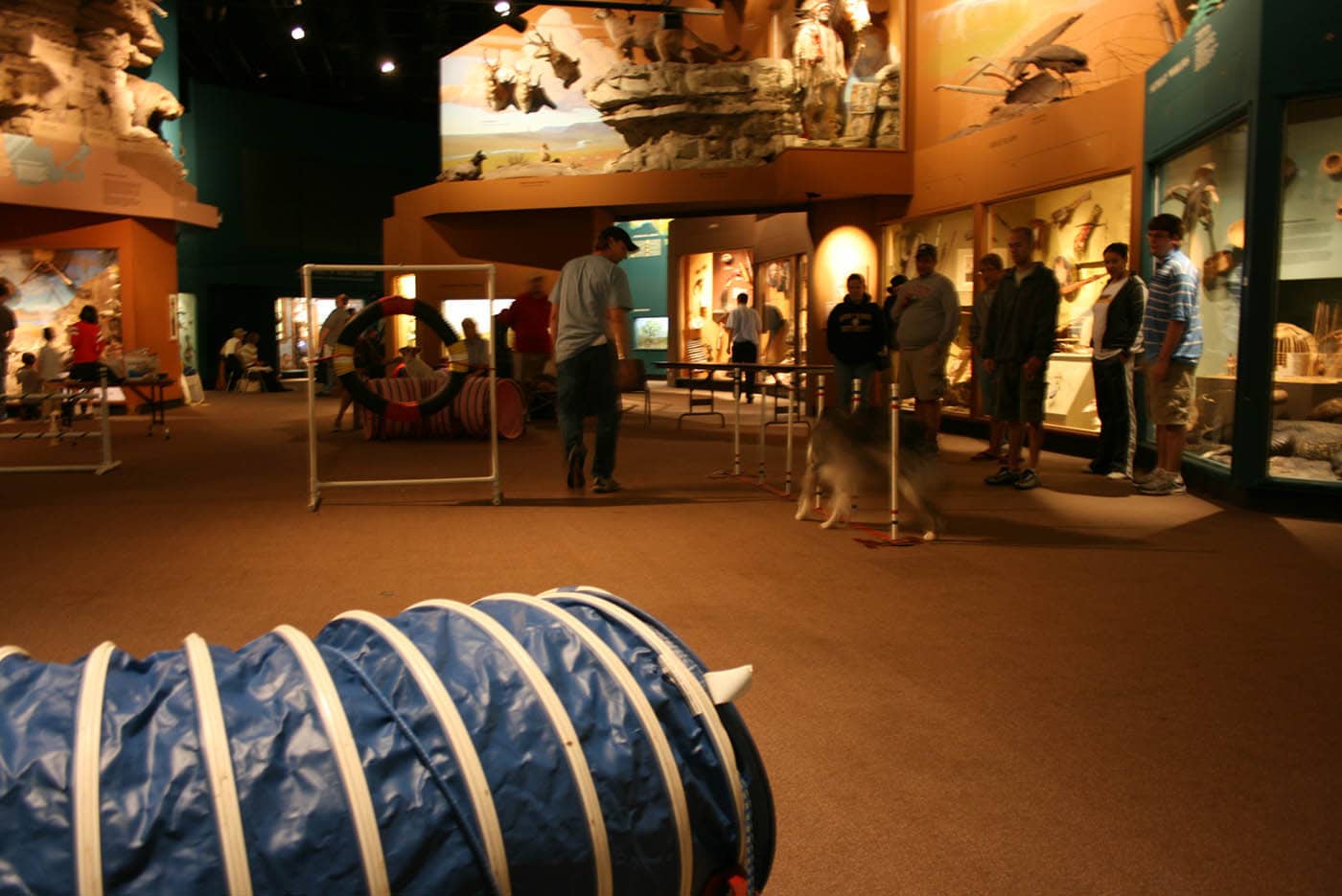 Anyways, they museum was literally filled with dogs wandering around. Odd.

What we really cared about though: Jewels!!!

I picked out all of the pink stones that would be appropriate to include on my future engagement ring. They are all in the photo gallery. Gentlemen, take note. 🙂 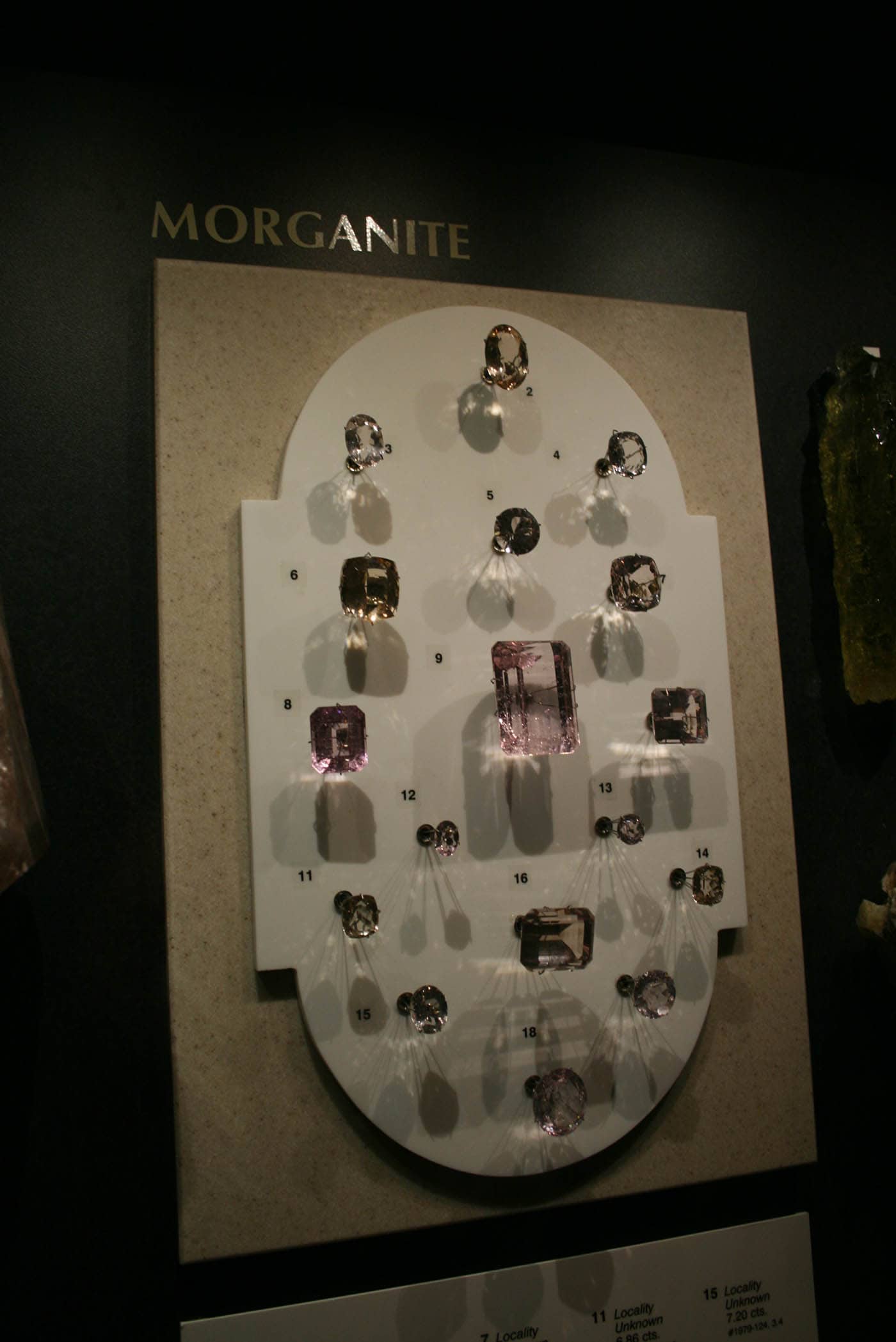 So, that is Cleveland in a rather large (dare I say World’s Largest?) Nutshell.

I hear it rocks there…

Next post
Reversal of Fortune (My 2007 Fantasy Competitive Eating Team)