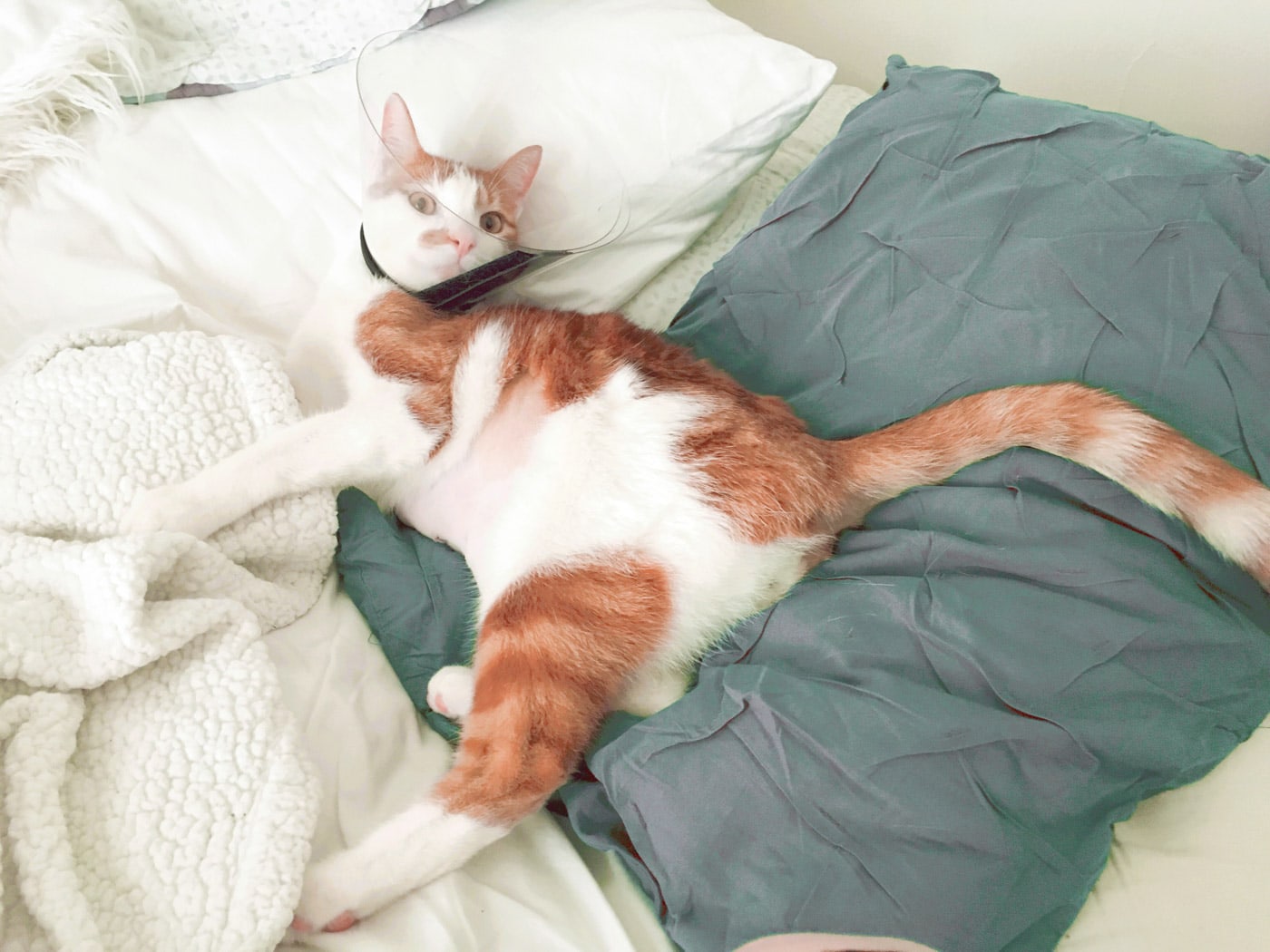 Things my cats have destroyed:
Two vases, knocked down from a shelf.
A snow globe photo frame that forever left glitter glued to the floor.
A candle holder.
A Disney Sleeping Beauty mug I’d had since high school.
A drinking glass I’d had since college.
My bedroom mirror.
Numerous rolls of toilet paper.
My fig tree and countless other plants.
A couple of Food & Wine magazines.
A jar of citrus-scented bath salts.
A surfing Obama bobble head.
The side of my couch.
The underside of my box spring.
All of my blinds.

I’m sure that there are more things that I can’t think of right now (or haven’t discovered yet). But that’s the gist of it. My cats destroy everything. 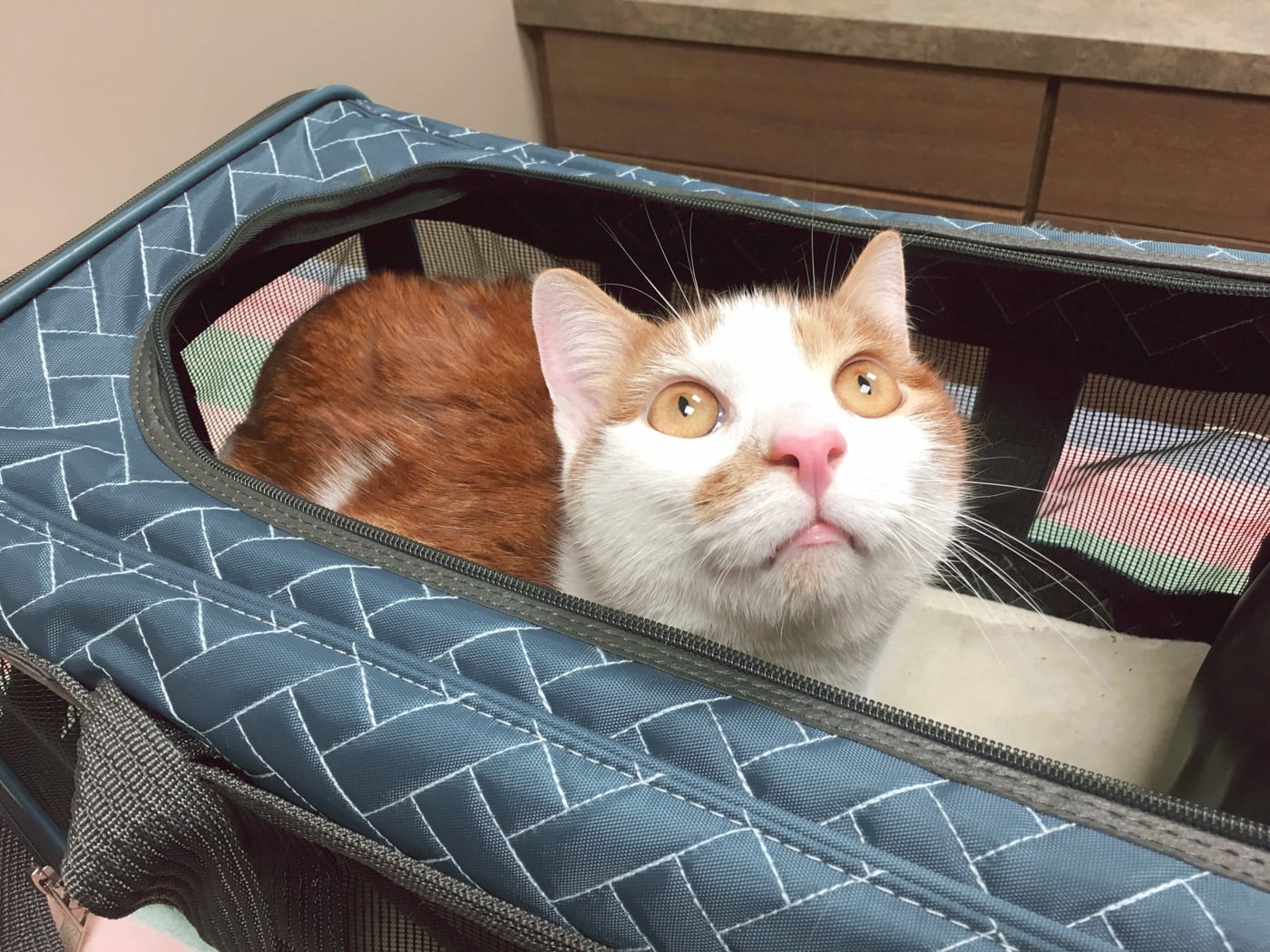 I first took Rooney to the emergency vet because he was vomiting all over the apartment and refusing to eat the treats that I was using to lure him out of hiding. If you know Rooney you know that he usually hoovers up his pile of chicken flavored Greenies and then pushes his more discerning brother out of the way so he can finish his pile too. For that cat to turn his nose up at a treat meant that something was most definitely wrong.

The emergency vet seemed to think I was overreacting to a cat who didn’t want a crunchie. He suggested it was dehydration, gave him a shot, and sent him home. He did suggest x-rays, but the potential invoice for just diagnostics was so incredibly high and it was ten o’clock at night and I was already exhausted and I had no one to discuss with and wasn’t even sure what the nurse was saying and was confused and I didn’t know what to do. So I told myself I’d call my regular vet in the morning, make an appointment with them, and pray that my cat was really OK and that their x-rays would at least be cheaper than getting them done at the ER.

The next day my cat pooped up a piece of string. 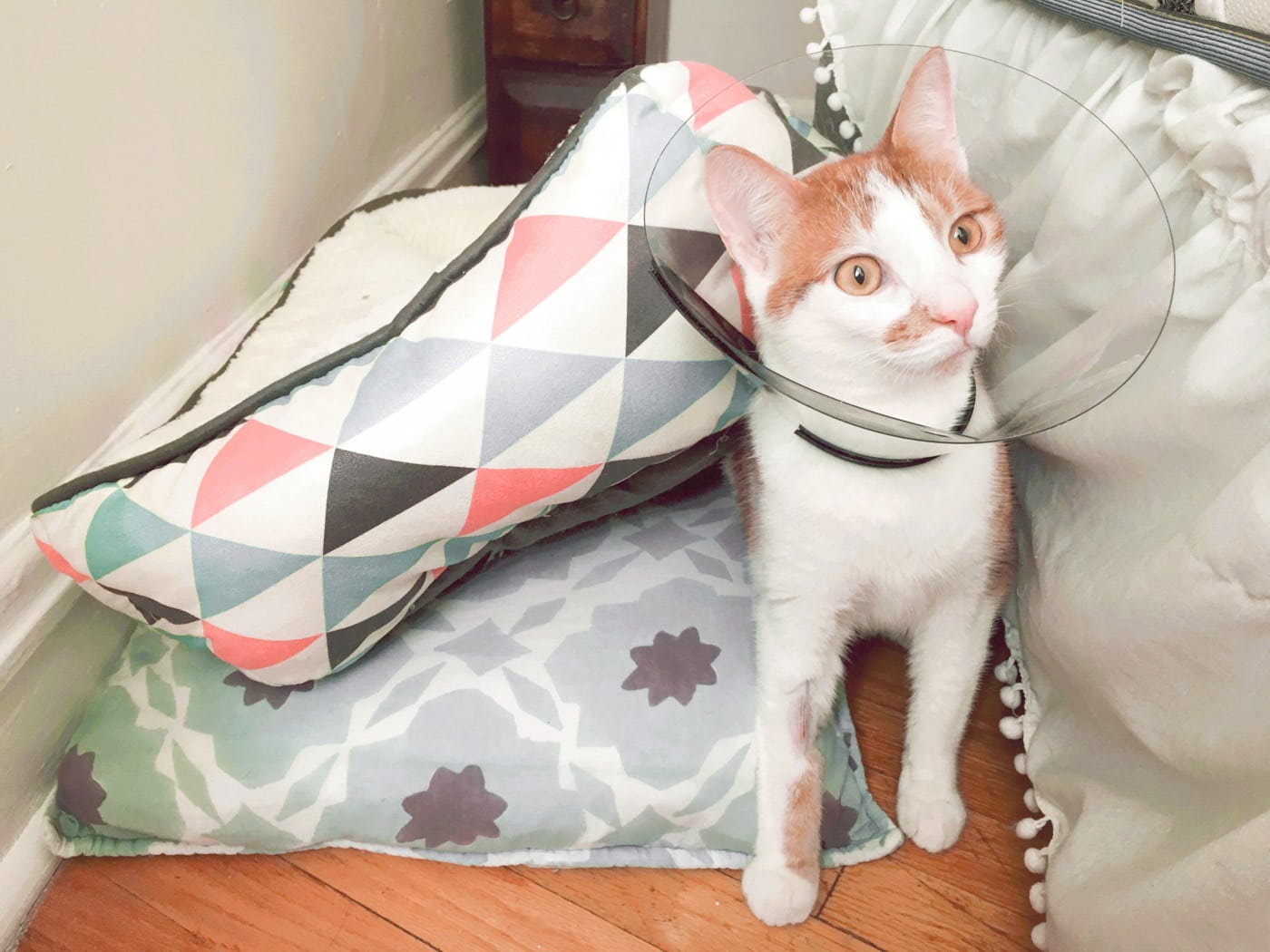 Have you ever seen a cat poop out a piece of string? It’s simultaneously hilarious and terrifying. He shot out from his litter box and frantically waddled around the living room leaving thread-infused skid marks all over the floor before dashing under the couch. I had to move the couch out of the way to get to him in order to see if he had poop stuck to his butt. Instead I found a six-inch hot pink thread dangling from his rectum. My other cat, Ford, was trying to sniff around and bat at it, so I scooped him up and locked him in the bathroom until we could leave to see my normal vet.

(Side note: Here is a photo, which I didn’t embed here because maybe you don’t want to see what it looks like but maybe you do.)

I took Rooney in and the doctors managed to pull most of the two-foot piece of towel out through his butt. Then they took x-rays and did a probe, and told me that it looked like there might be more remnants inside. Remnants that he might pass but also might not without complication. And so he needed surgery. And so they opened his stomach.

In the end, the doctors found nothing in his intestines but a little too much cat hair.

But better safe than sorry. 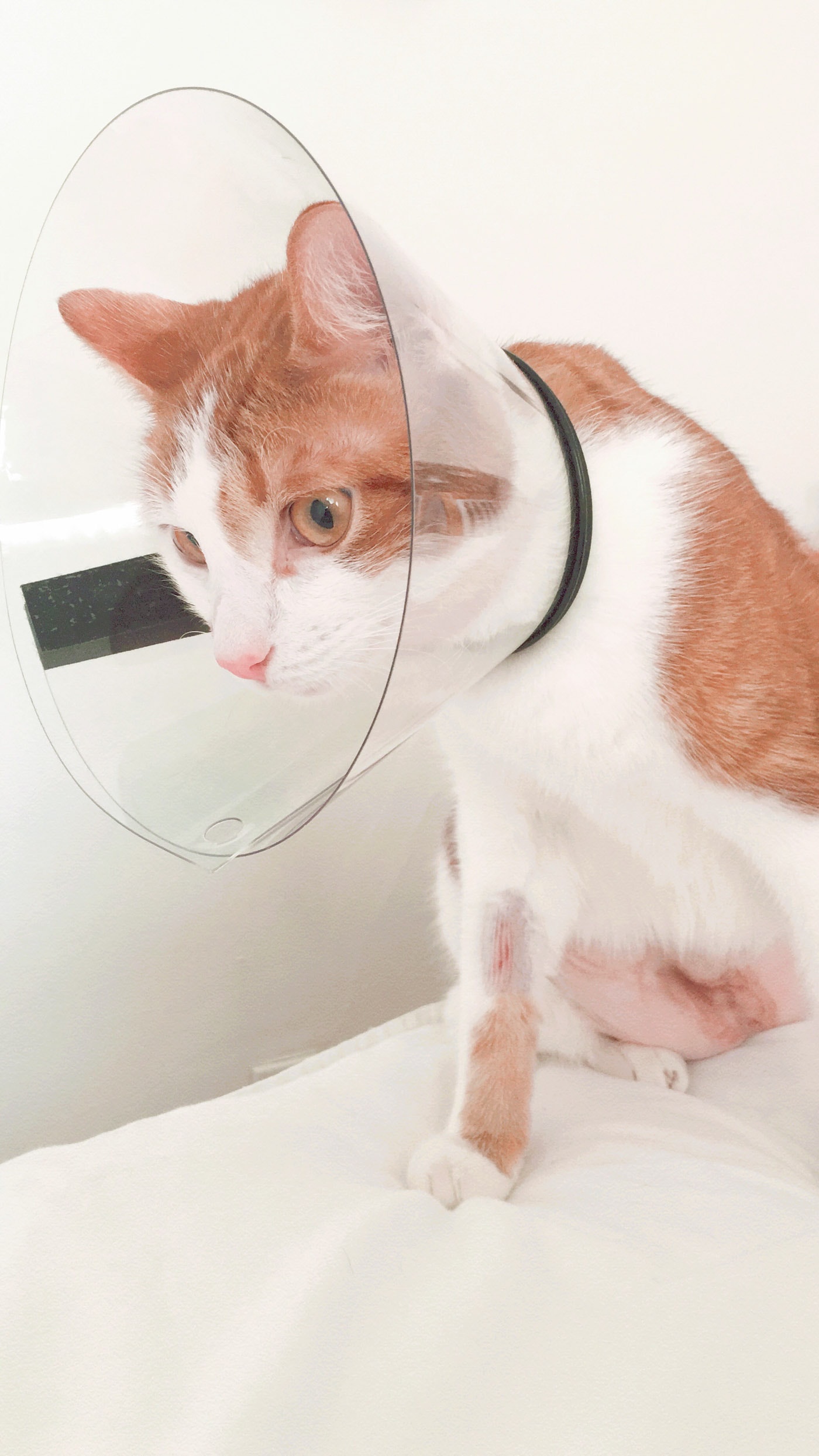 The whole ordeal destroyed me.

Every insecurity, every fear, every shortcoming I have came bubbling to the surface.

I spent much of the next few days sobbing uncontrollably on the floor in a state of panic.

I felt angry at myself for being neglectful and letting Rooney get hurt.

I felt scared that he wasn’t going to make it, that something would go wrong.

I felt guilty for not getting Rooney the x-rays the night before. For putting my wallet before his comfort.

I felt worried that Rooney would never be the same, that he would no longer trust me.

I felt frustrated because I had to comically move the bed around the room to get to my hiding, scared, cat who would then just dart to another corner. And you can’t explain to a cat that that you’re just trying to give him pain medicine, medicine that will make him feel better, not trying to hurt him.

I’d never felt so broke because I had to cancel my upcoming vacation to New York. Because I couldn’t afford the vacation before and certainly couldn’t now. And I hated myself for being in a position where an unexpected vet bill would be so devastating.

I’d never felt so alone because still, ten years later, my dad is the only person I want to call to tell me what to do when I don’t know what to do. 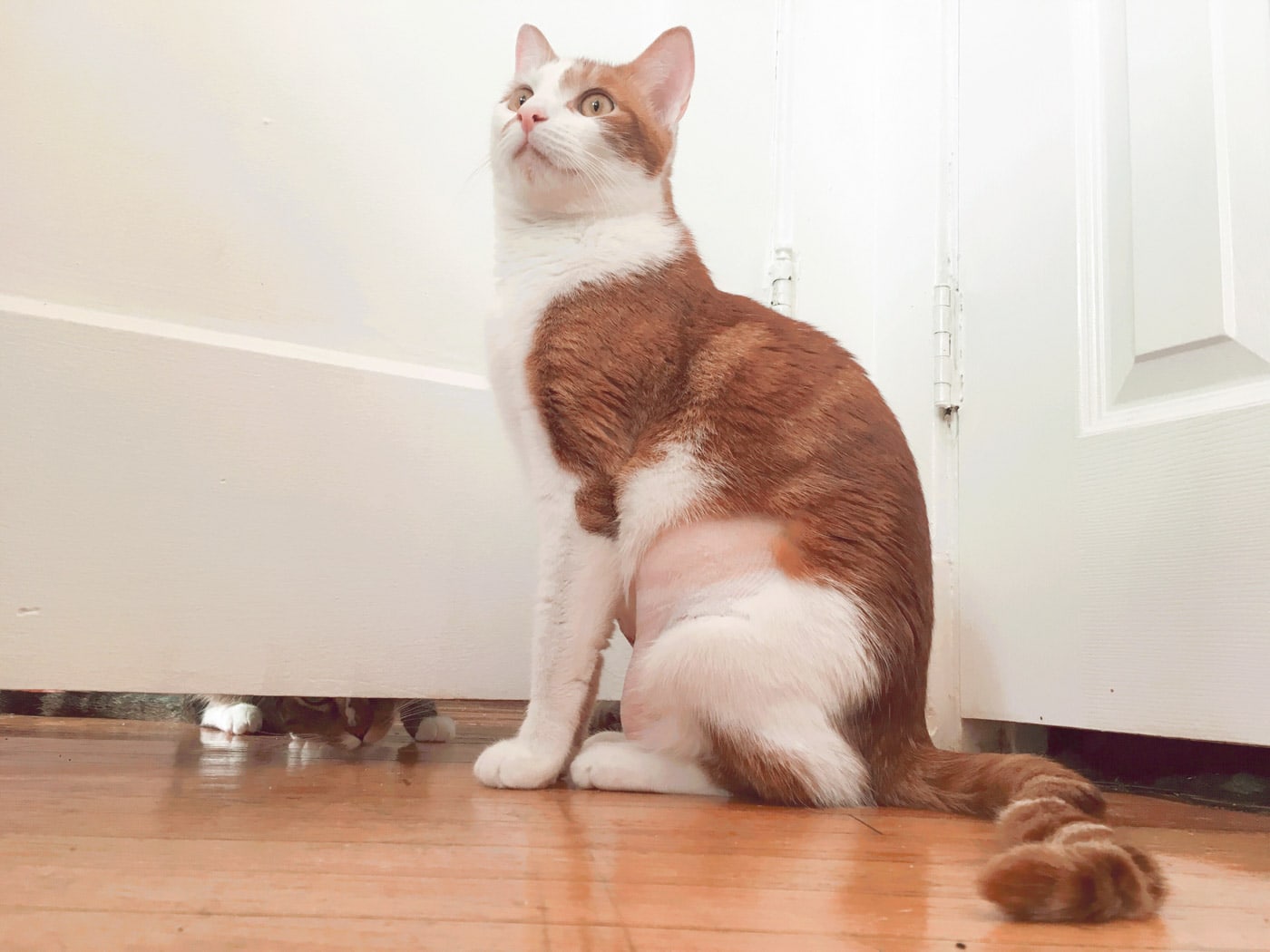 Nearly two weeks later, Rooney is doing fine. He is eating again, pooping again, cuddling again, has his energy back again. He misses his brother and life beyond the bedroom I’ve kept him locked in while he recovers. But his scar is healing nicely, the fur on his shaved belly is starting to grow back, and he’s back to normal.

I’m doing OK too, though my full recovery might take longer than his. I can’t say that I have my energy back yet and my credit card may never recoup. But when Rooney perches on my chest while I watch TV under the covers, I know we’re both going to be OK. 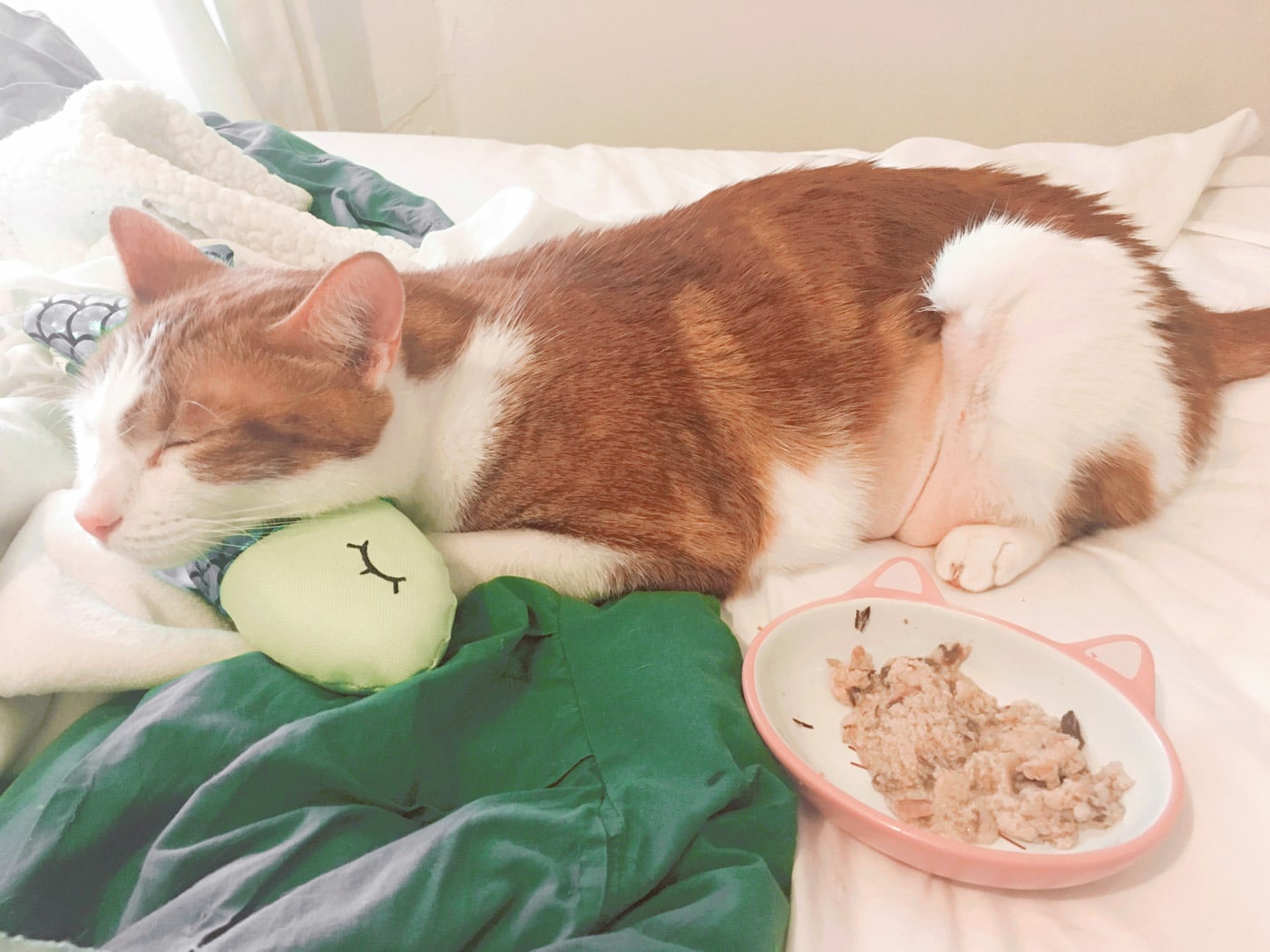 in Cats
by Val Bromann

It's been a year since I adopted my cats. I'm not sure exactly which day to count as their official...