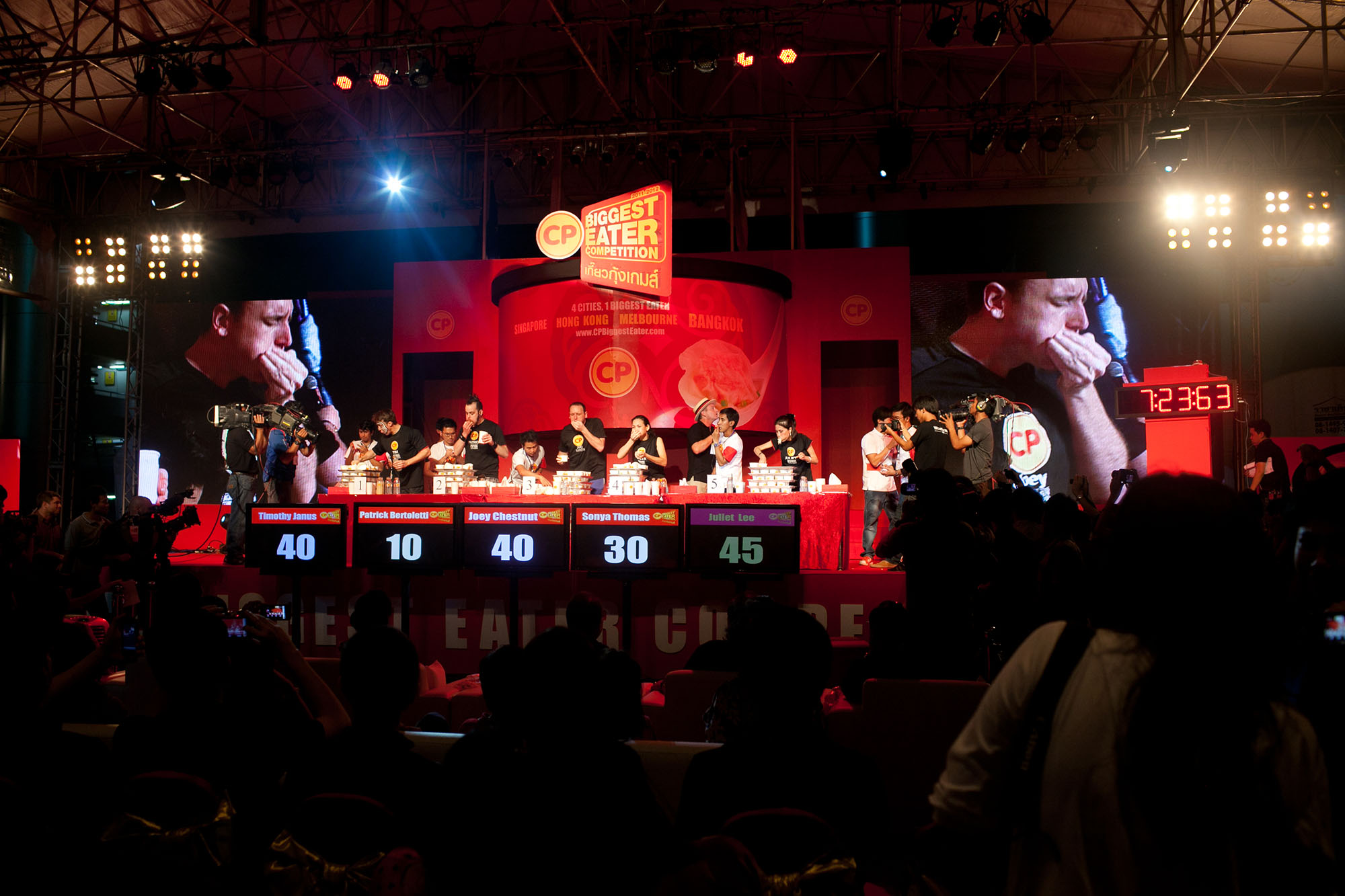 The biggest eater in Bangkok, Thailand.

If I was excited for my first international eating competition, I was really excited for the CP Biggest Eater shrimp wonton eating contest finale in Bangkok, Thailand.

For the second weekend in a row, I headed off to Siam Paragon to watch some of the greatest (and some of my favorite) competitive eaters in the world try to eat as many shrimp wontons as inhumanly possible in eight minutes. 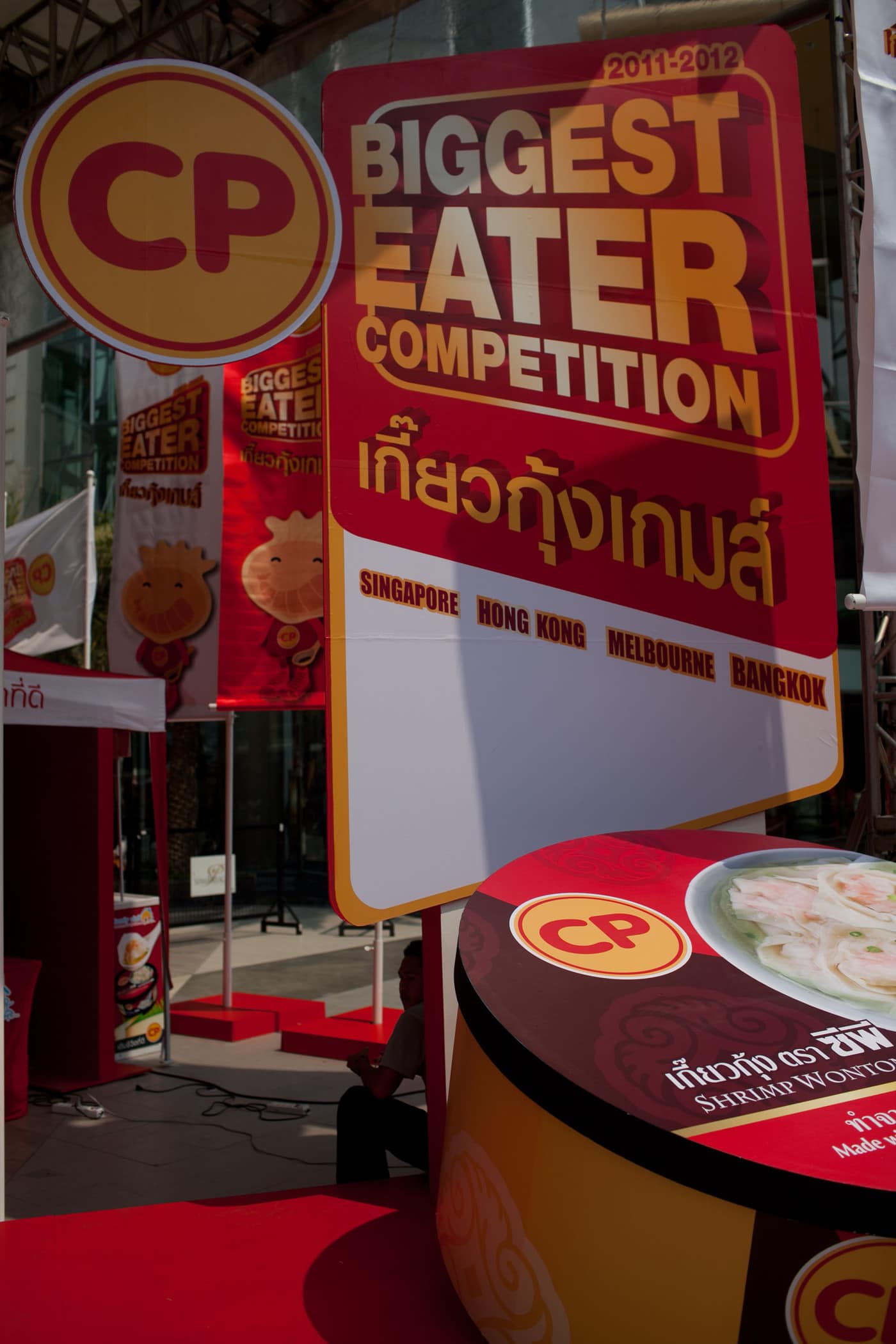 It was a long day. Maybe a little too long to be standing in a crowd in the Bangkok heat. It was similar to a Coney Island July 4th. Hot, sweaty, too many people trying to squeeze in for the best view.

After the fanfare of a marching band entrance, cheerleaders, flag twirlers, and girl band, the competitions got underway. 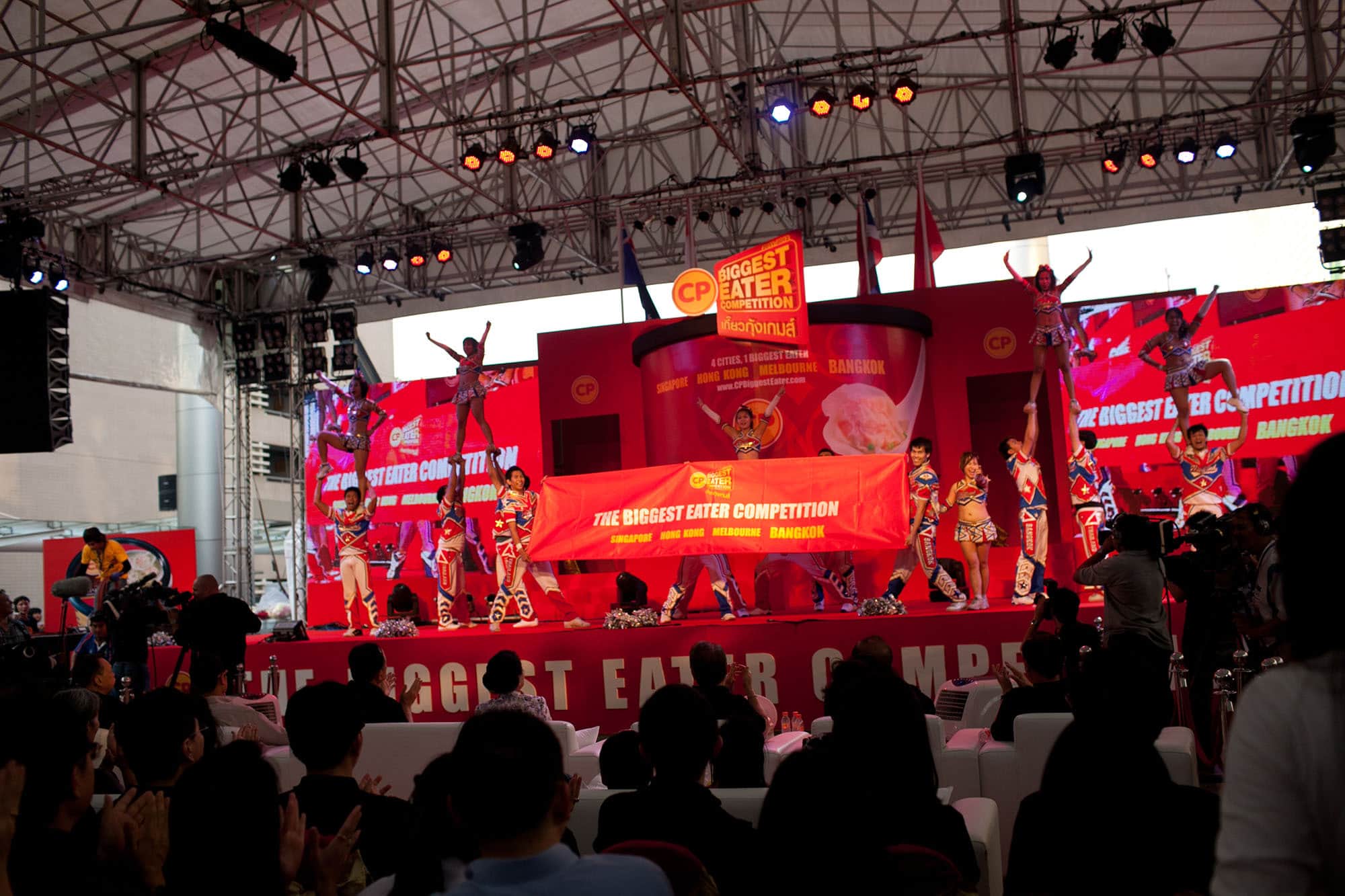 First up was the women’s contest with all of the female eaters who had won the finals in Singapore, Hong Kong, Melbourne, and Bangkok. 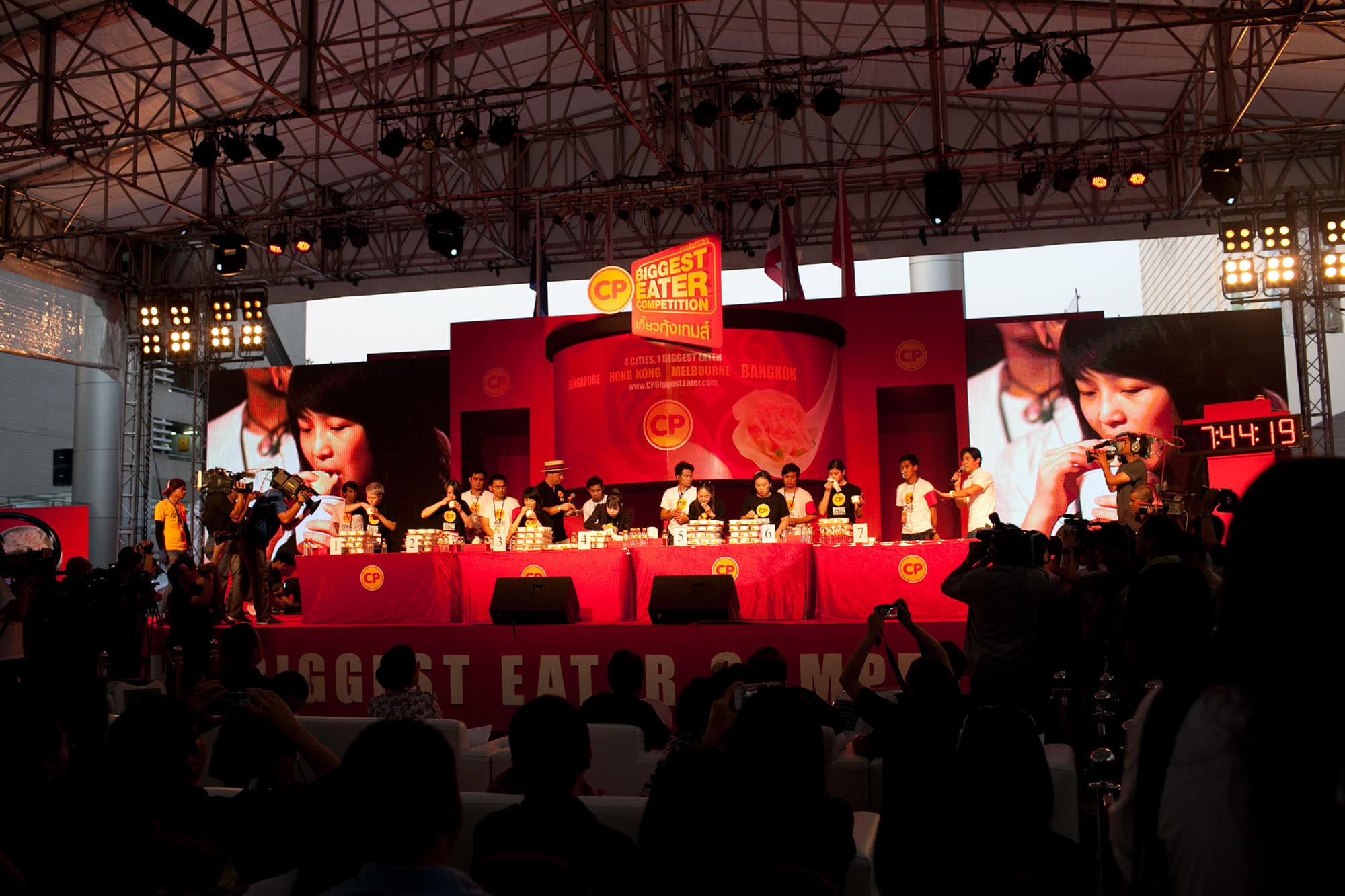 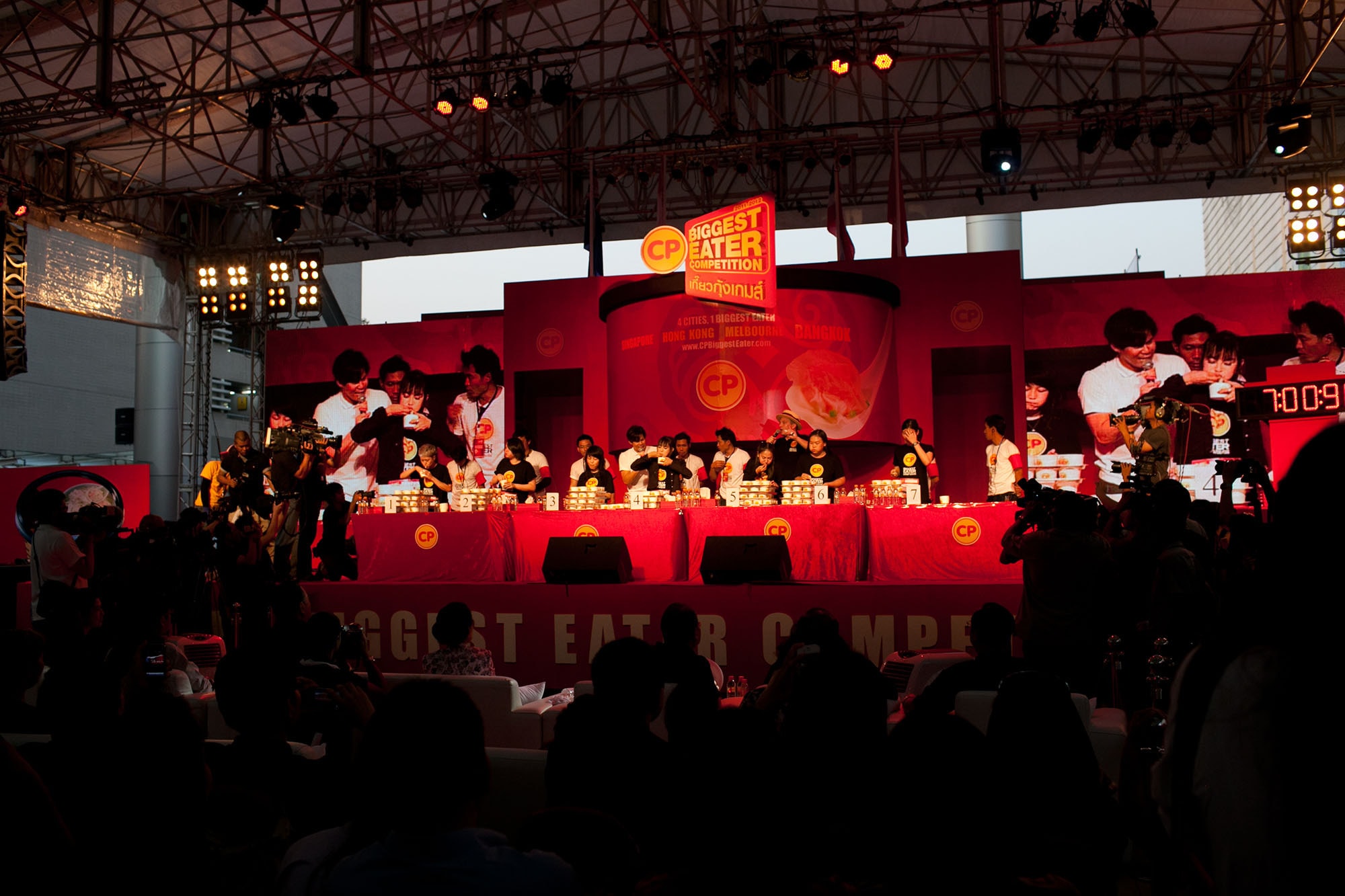 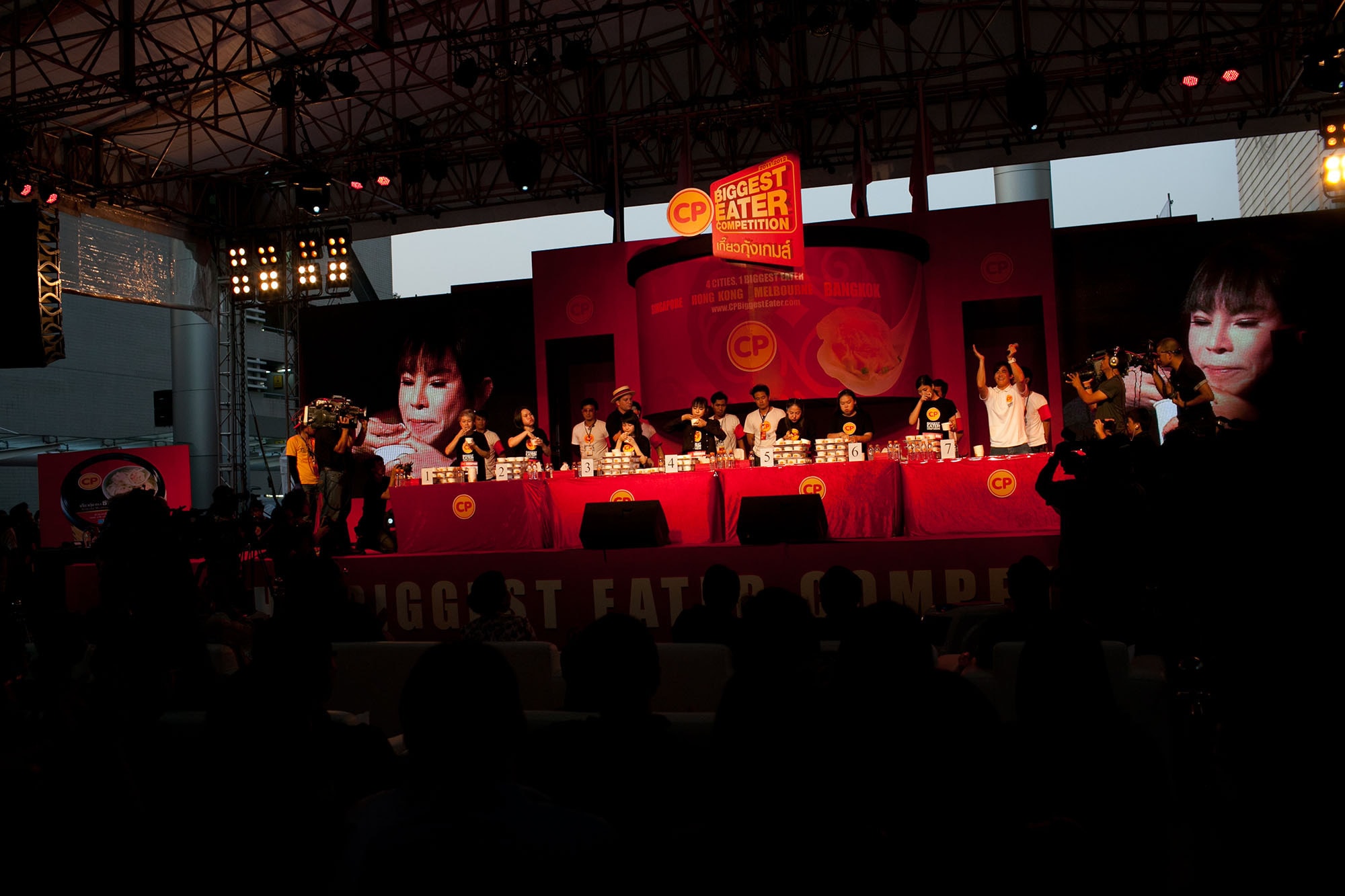 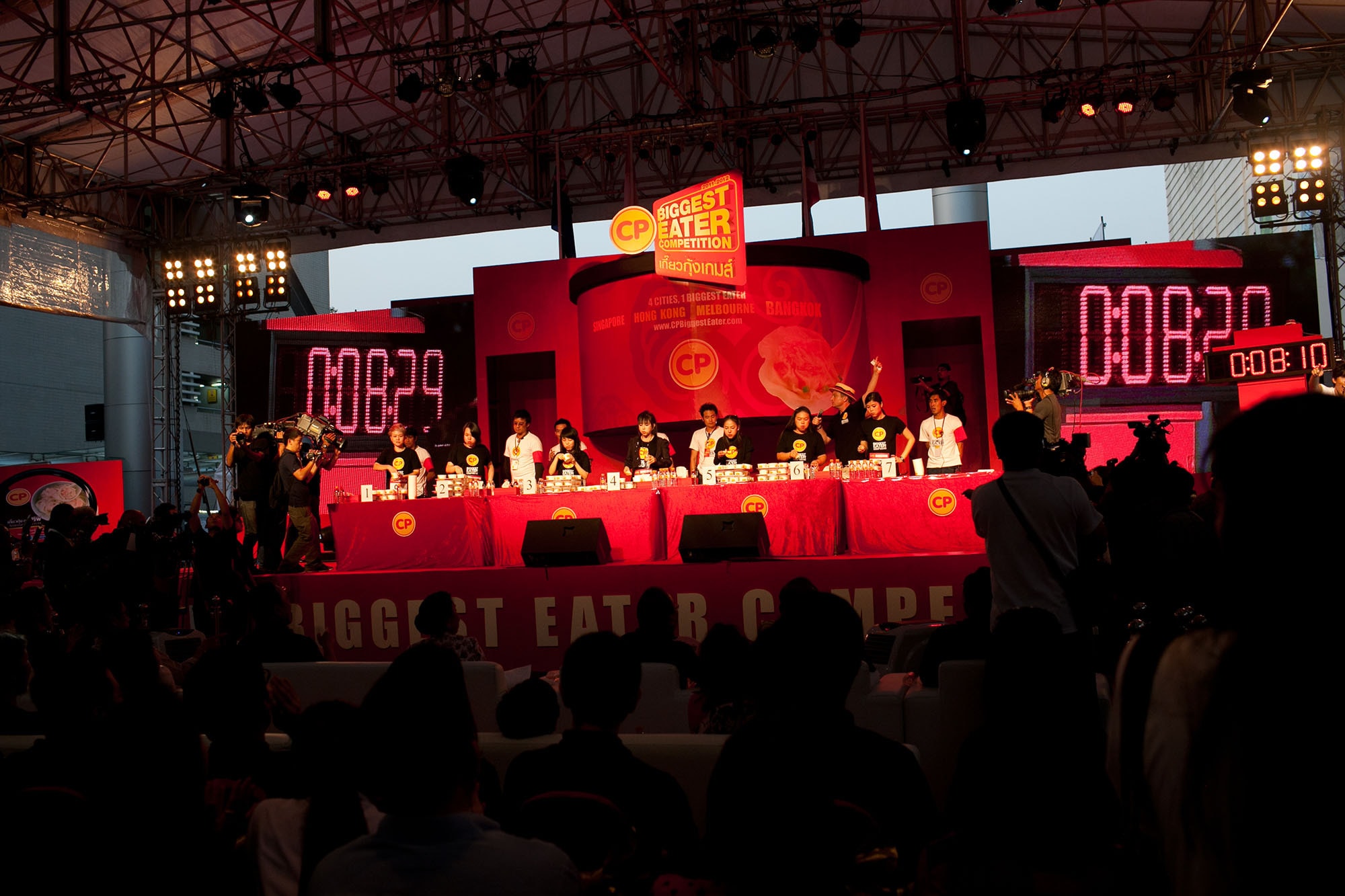 And then the men’s, as some of the biggest eaters in Asia took to the stage. 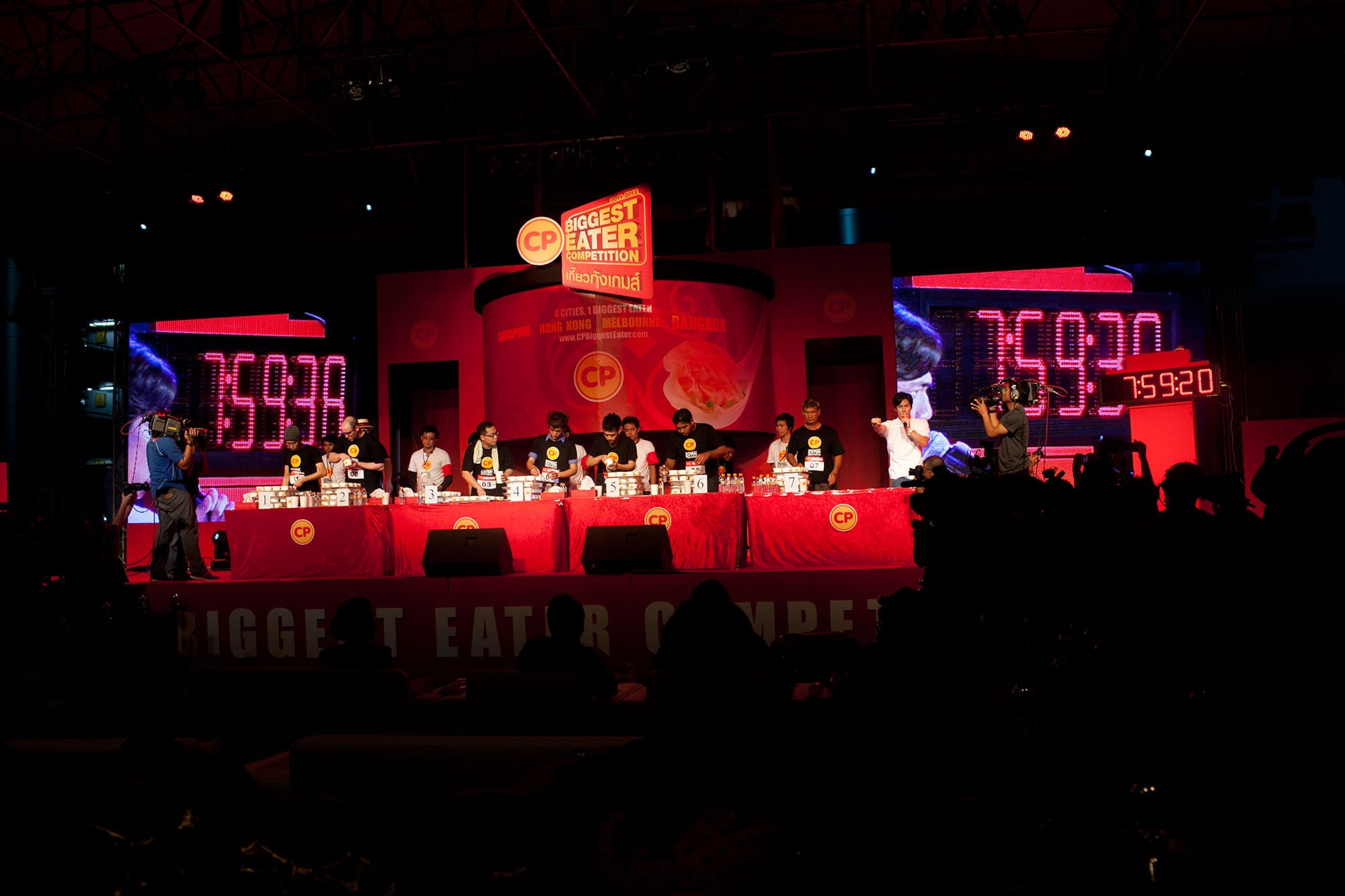 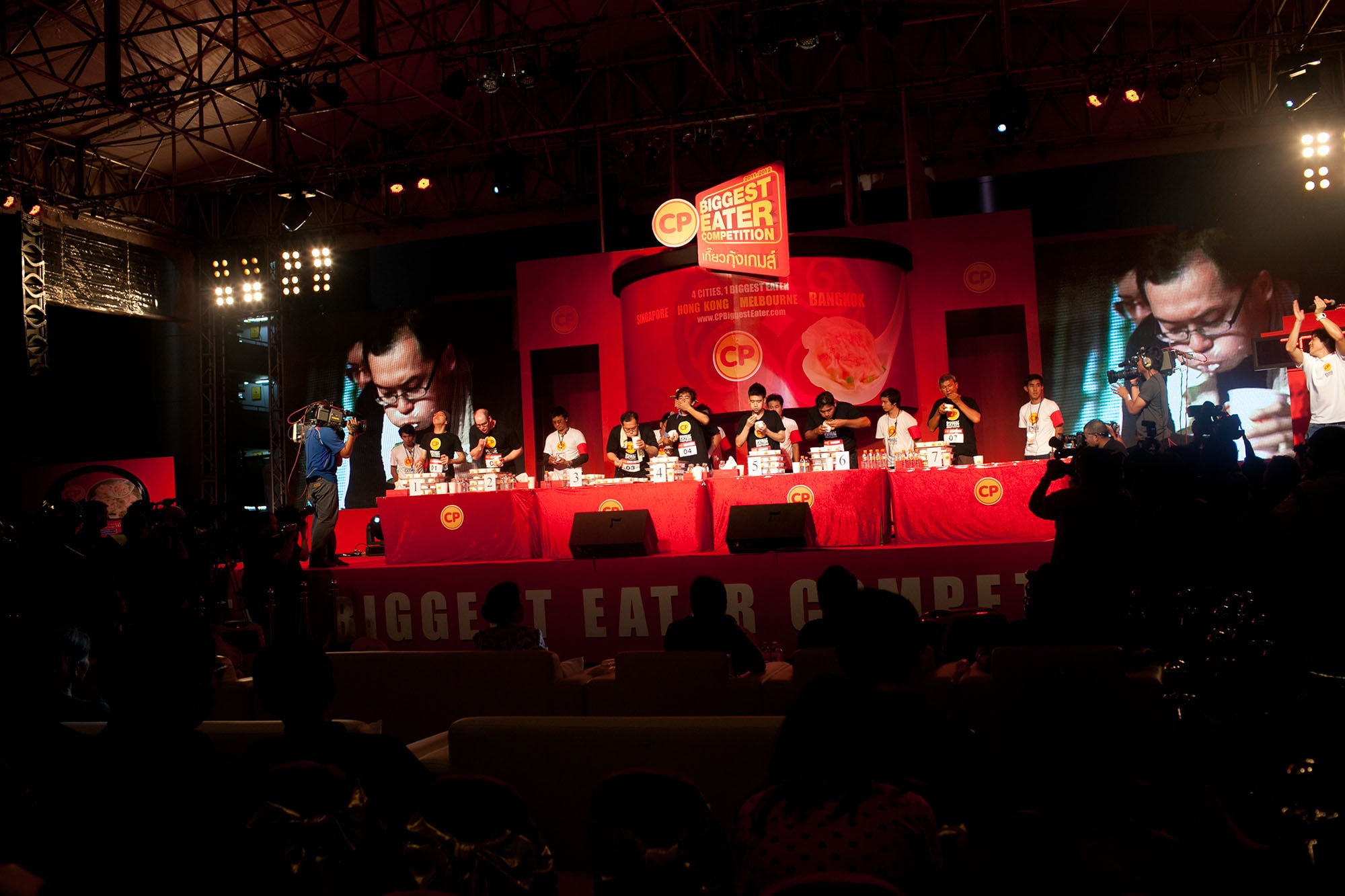 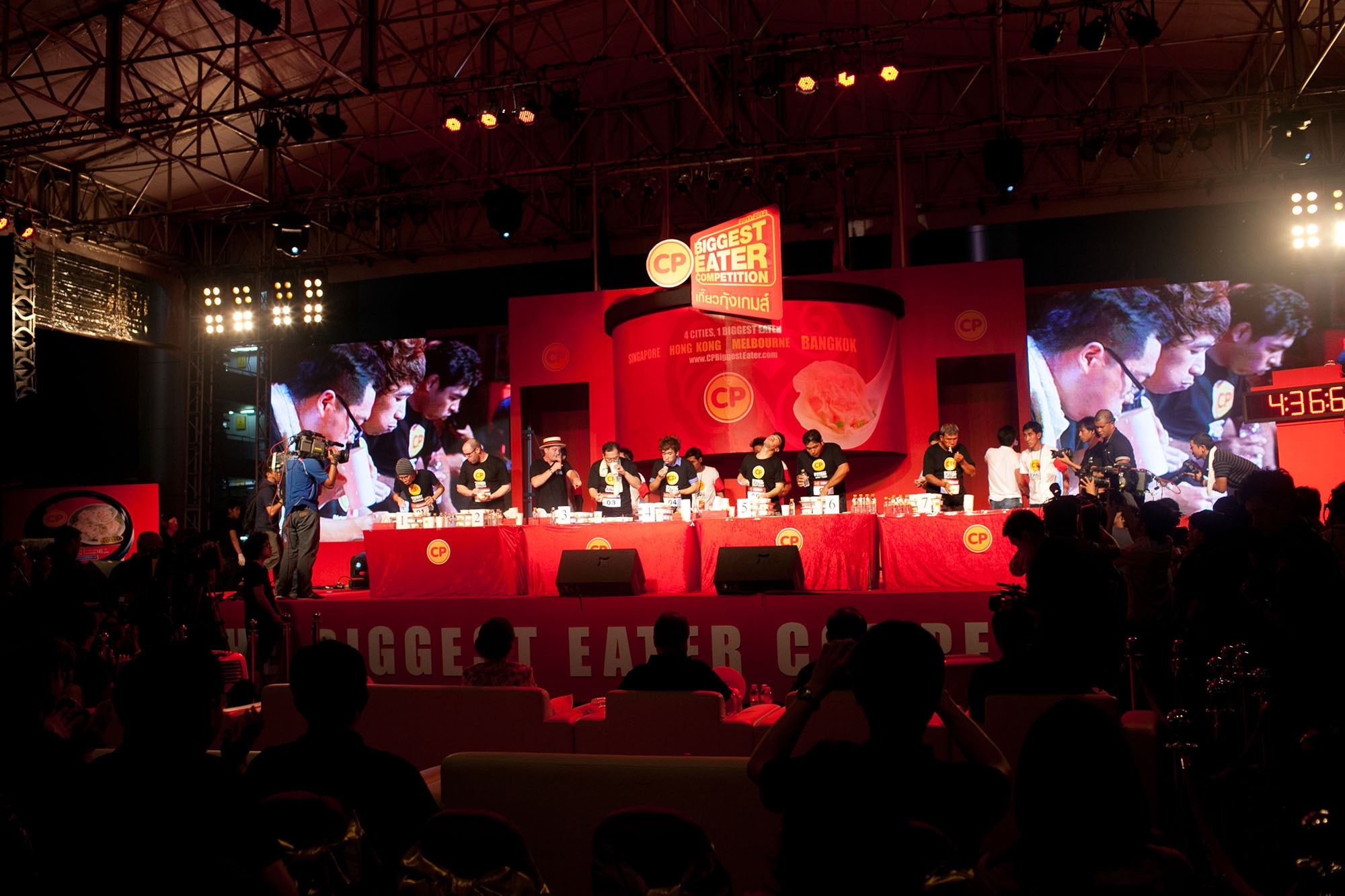 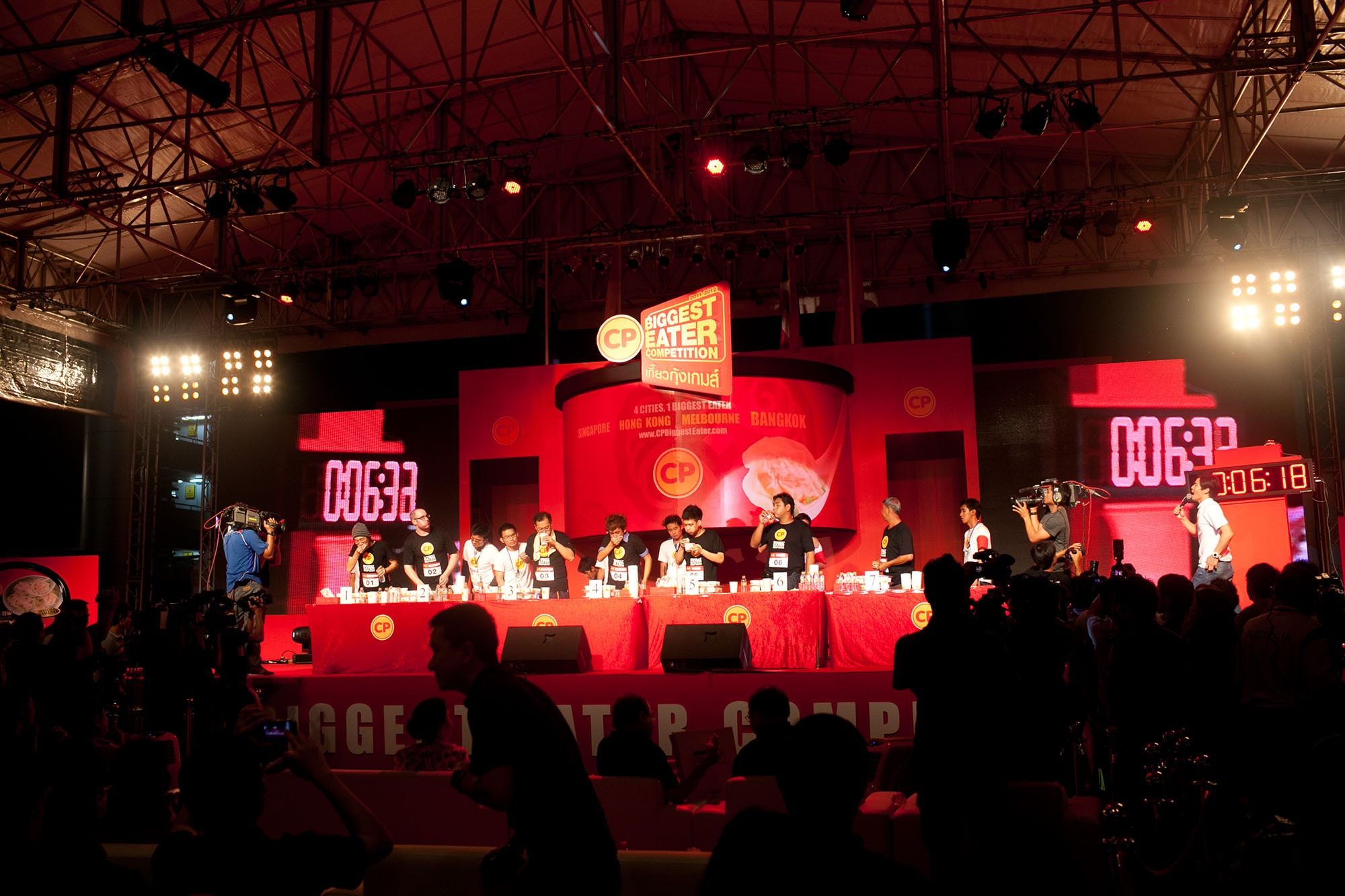 Both contests were thrilling, with a much faster pace than most other amateur contests I’ve seen. And, in both heats, the Singapore champions came out on top.

After those rounds it was time for the professional competitive eaters (from Major League Eating) to take the stage. The top three male and top two female eaters in the world — Joey Chestnut, Pat Bertoletti, Tim Janus, Sonya Thomas, and Juliet Lee — would all be competing against themselves…and the wontons.

The crowd counted down in Thai numbers and soon bowl after bowl of wontons were cleared in this Bangkok eater challenge. 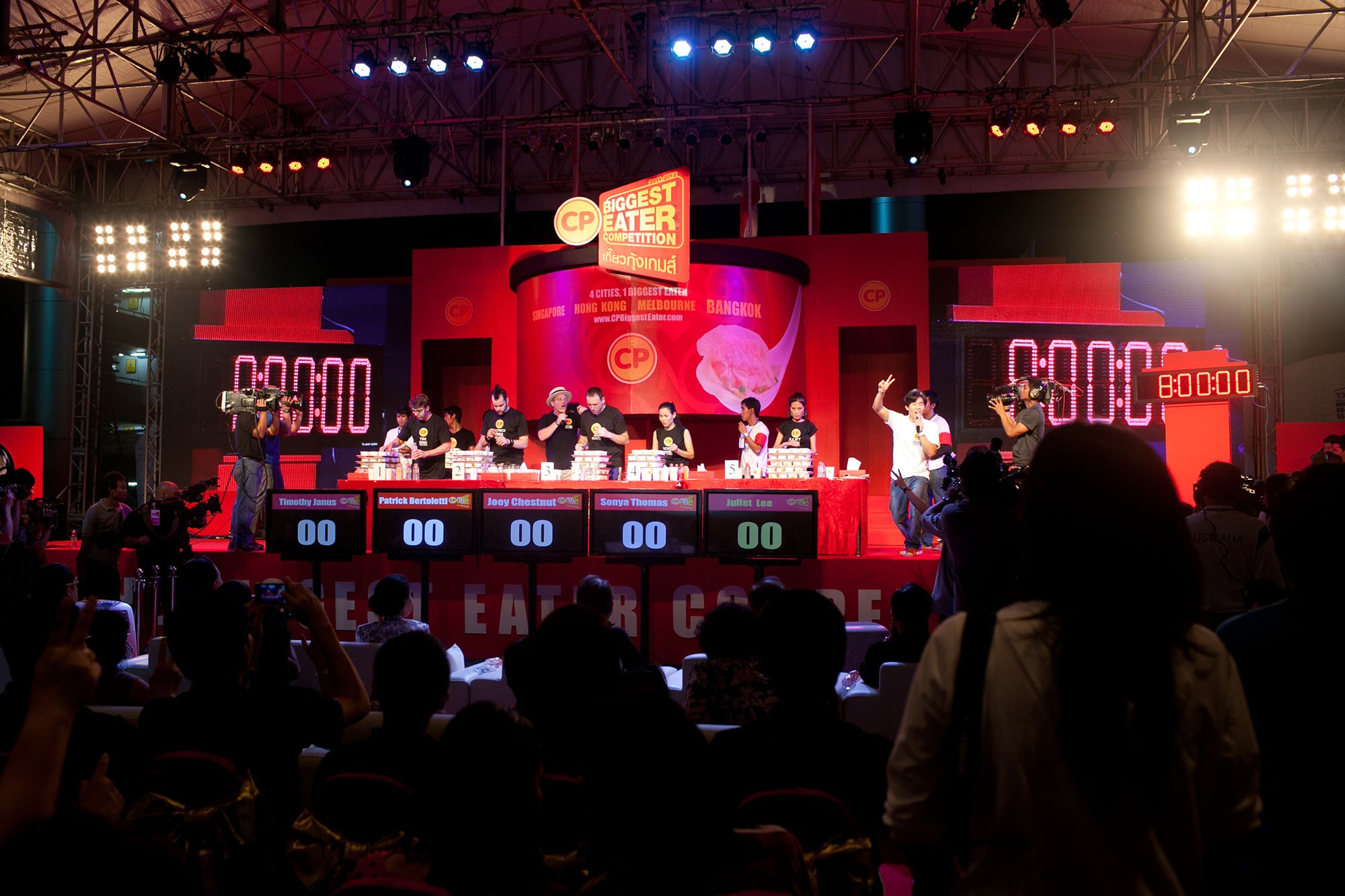 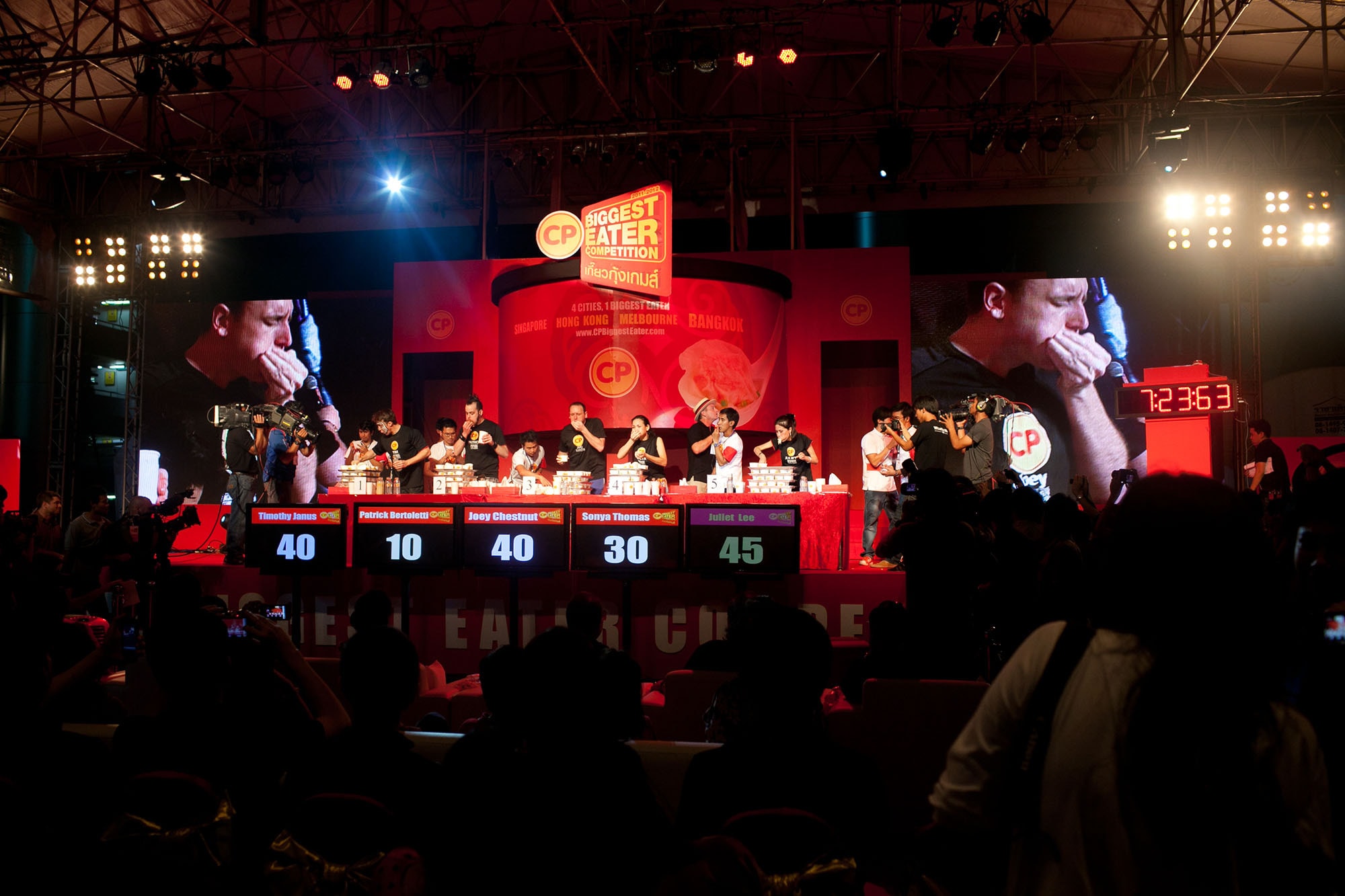 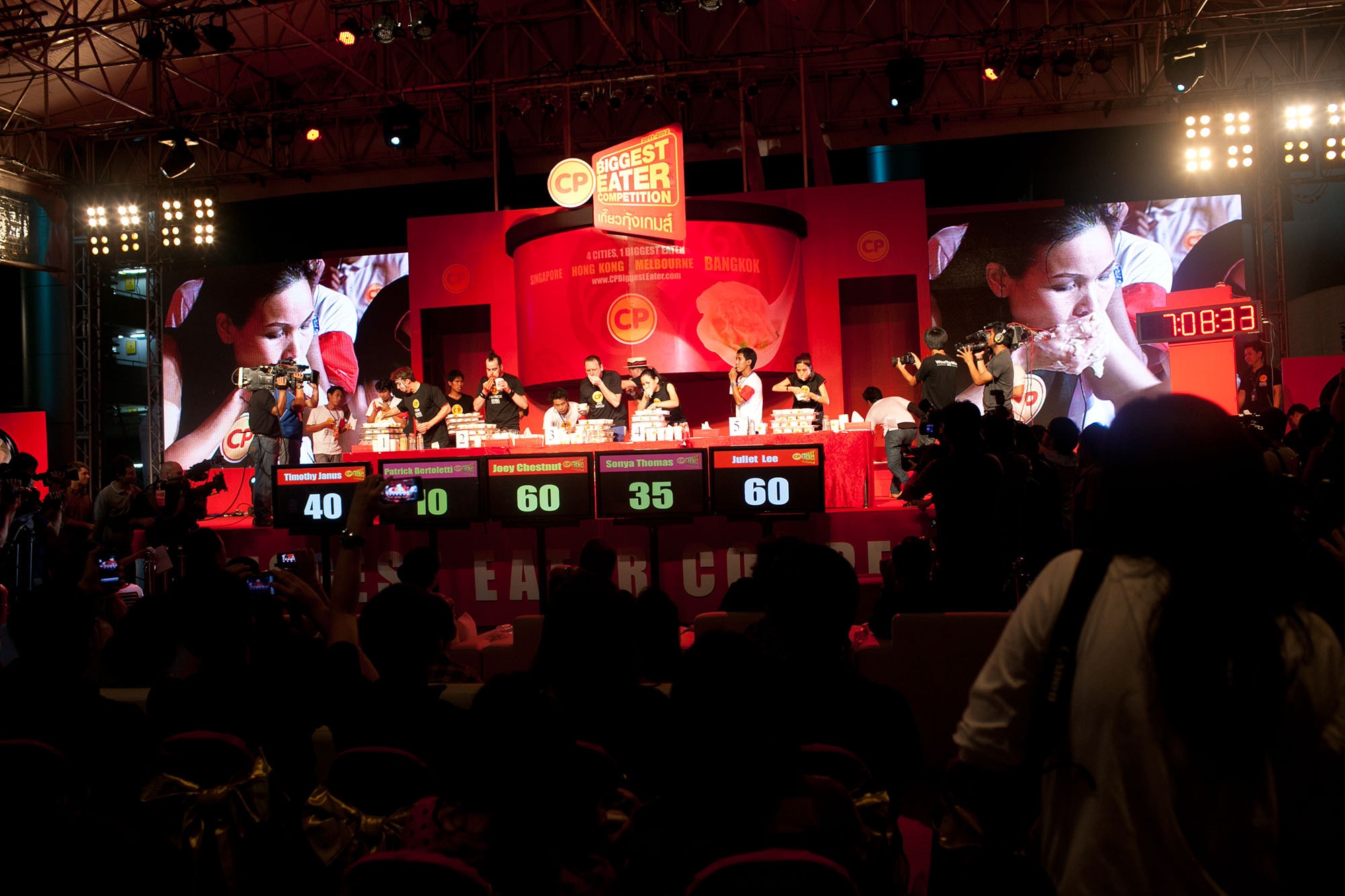 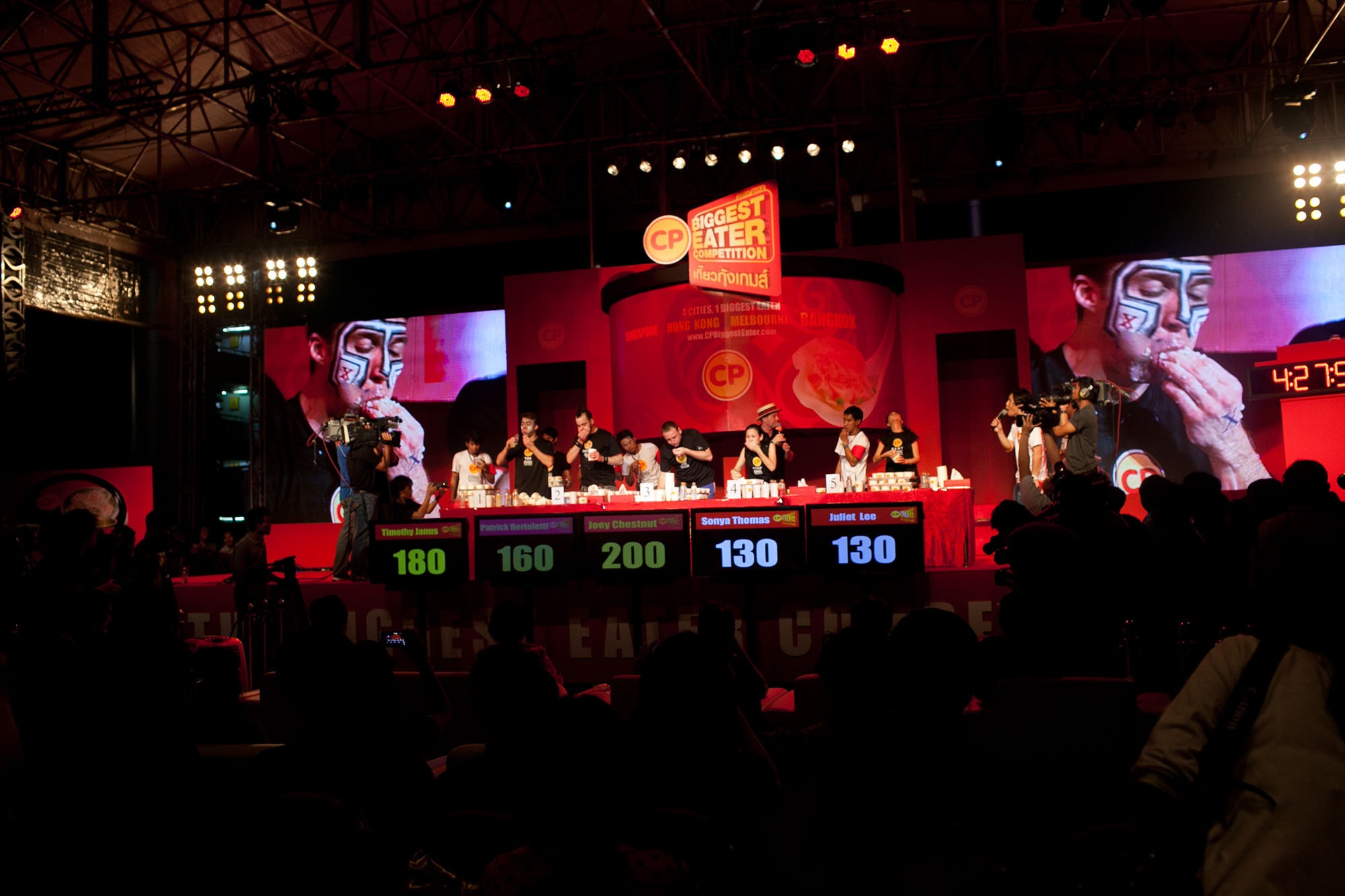 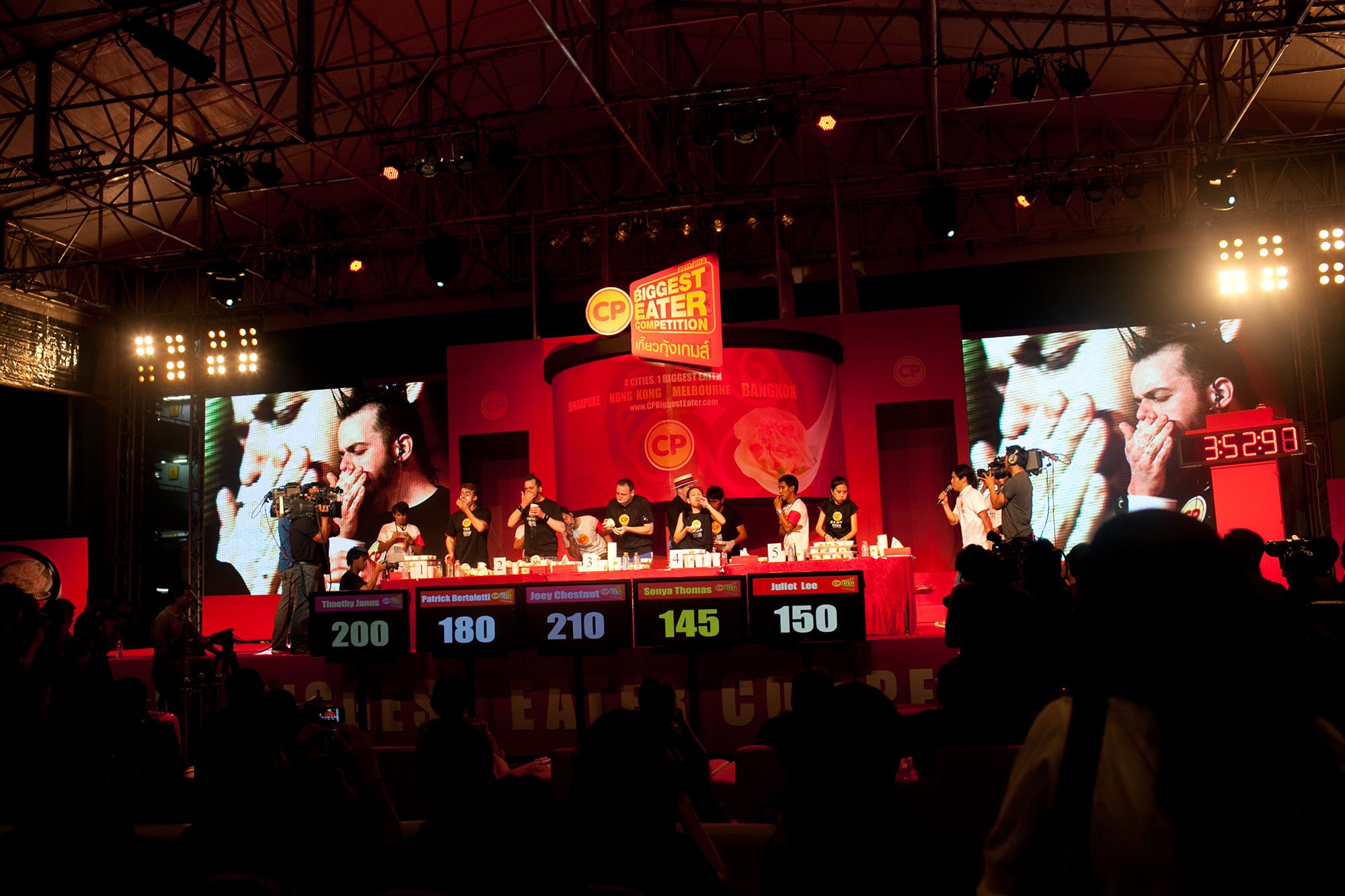 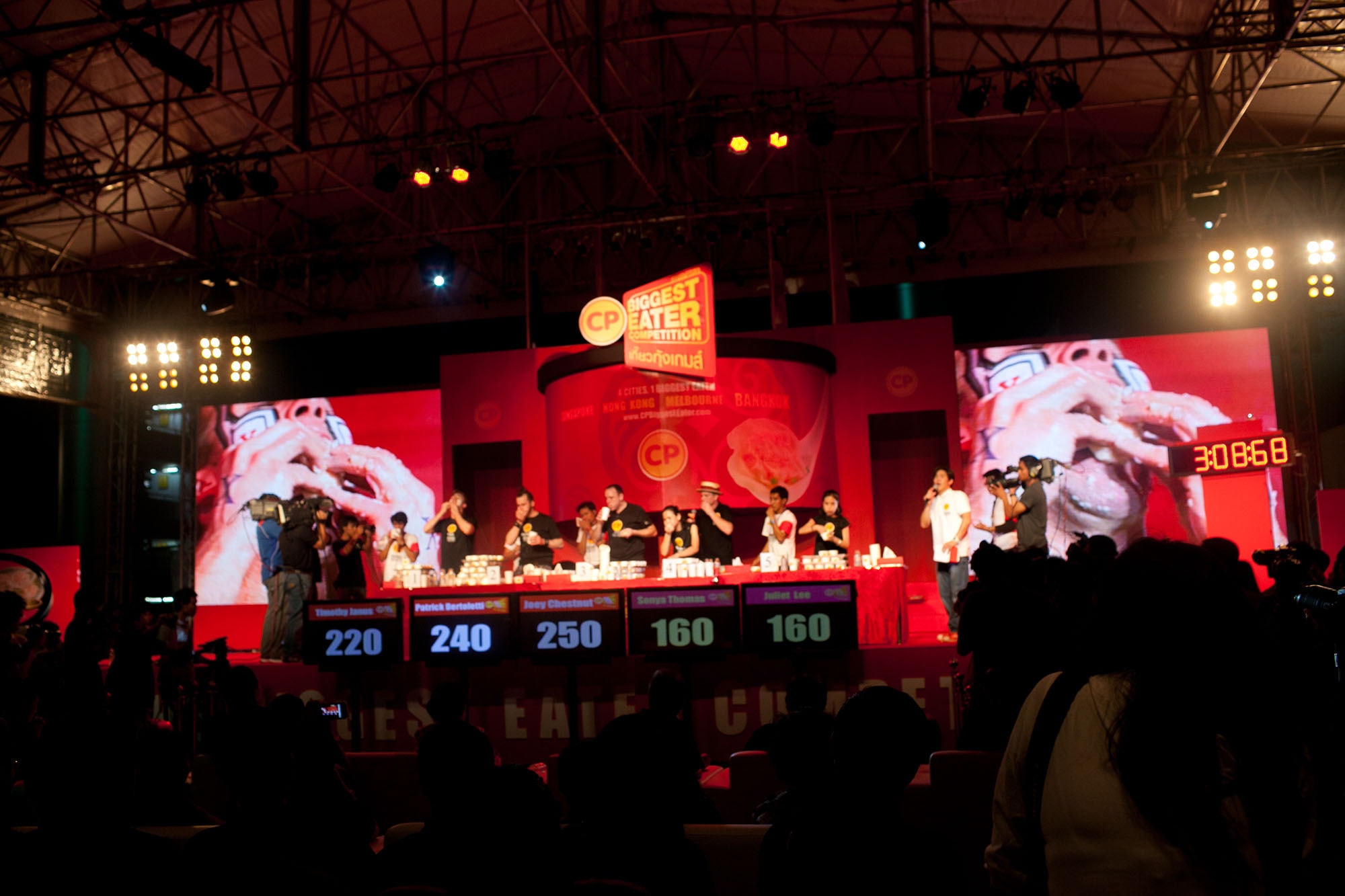 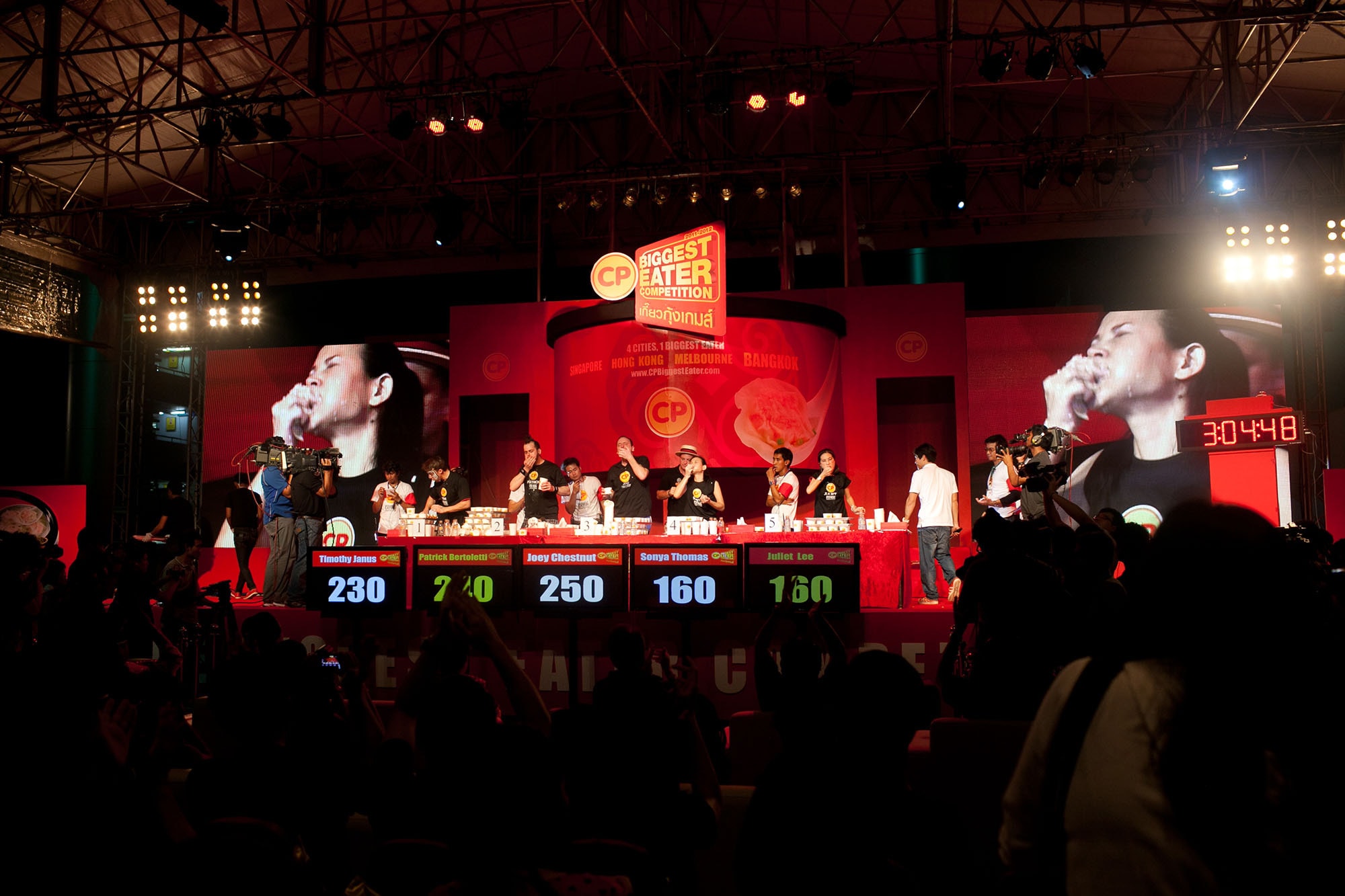 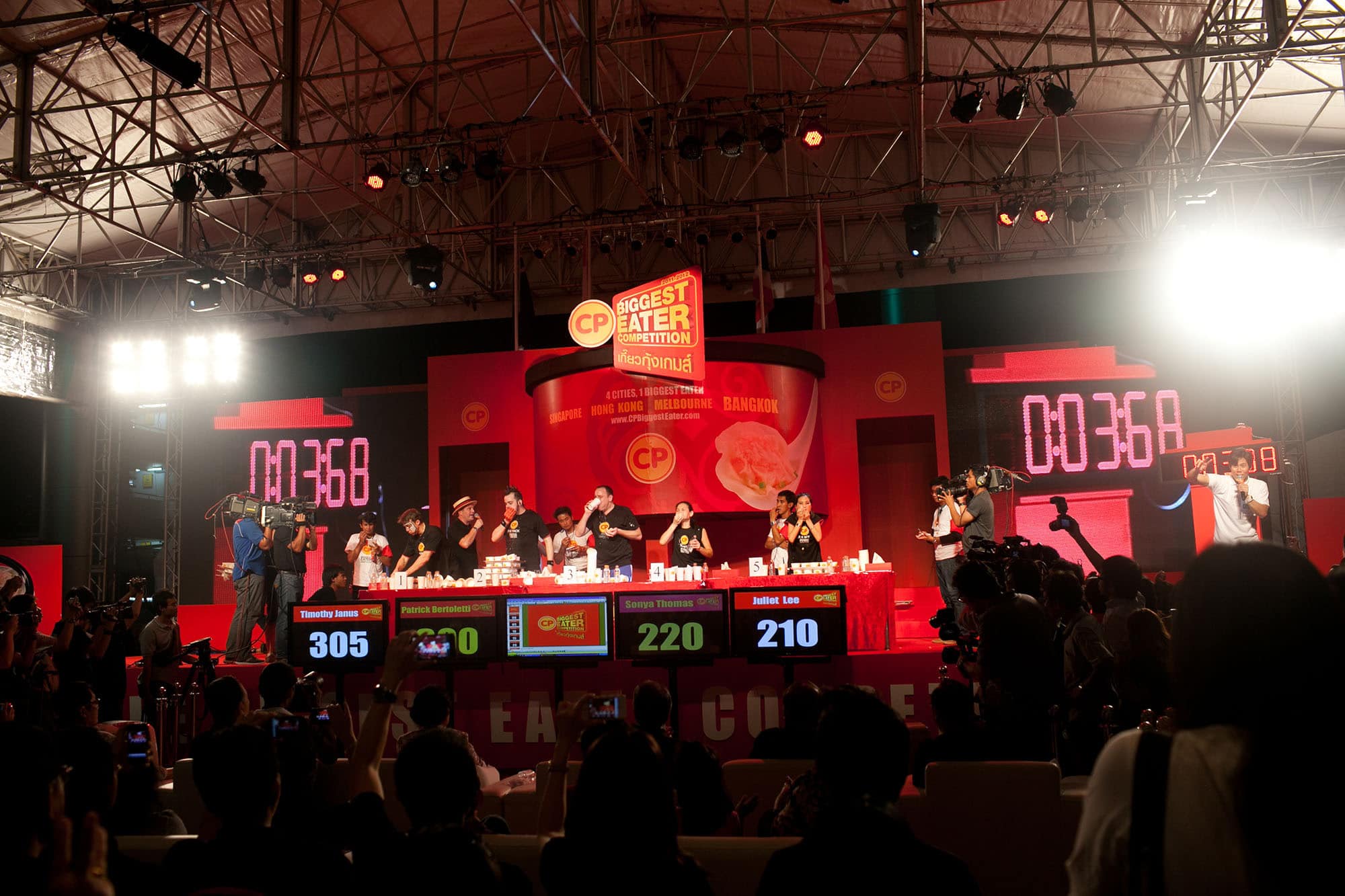 The eaters ate furiously until the clock ran out, and the audience watched the numbers on the television screens in front of them climb and climb to insane heights.

Joey Chestnut, the world’s number one ranked competitive eater in the world, came out on top, smashing the competition, smashing the world record, eating 390 wontons in 8 minutes. 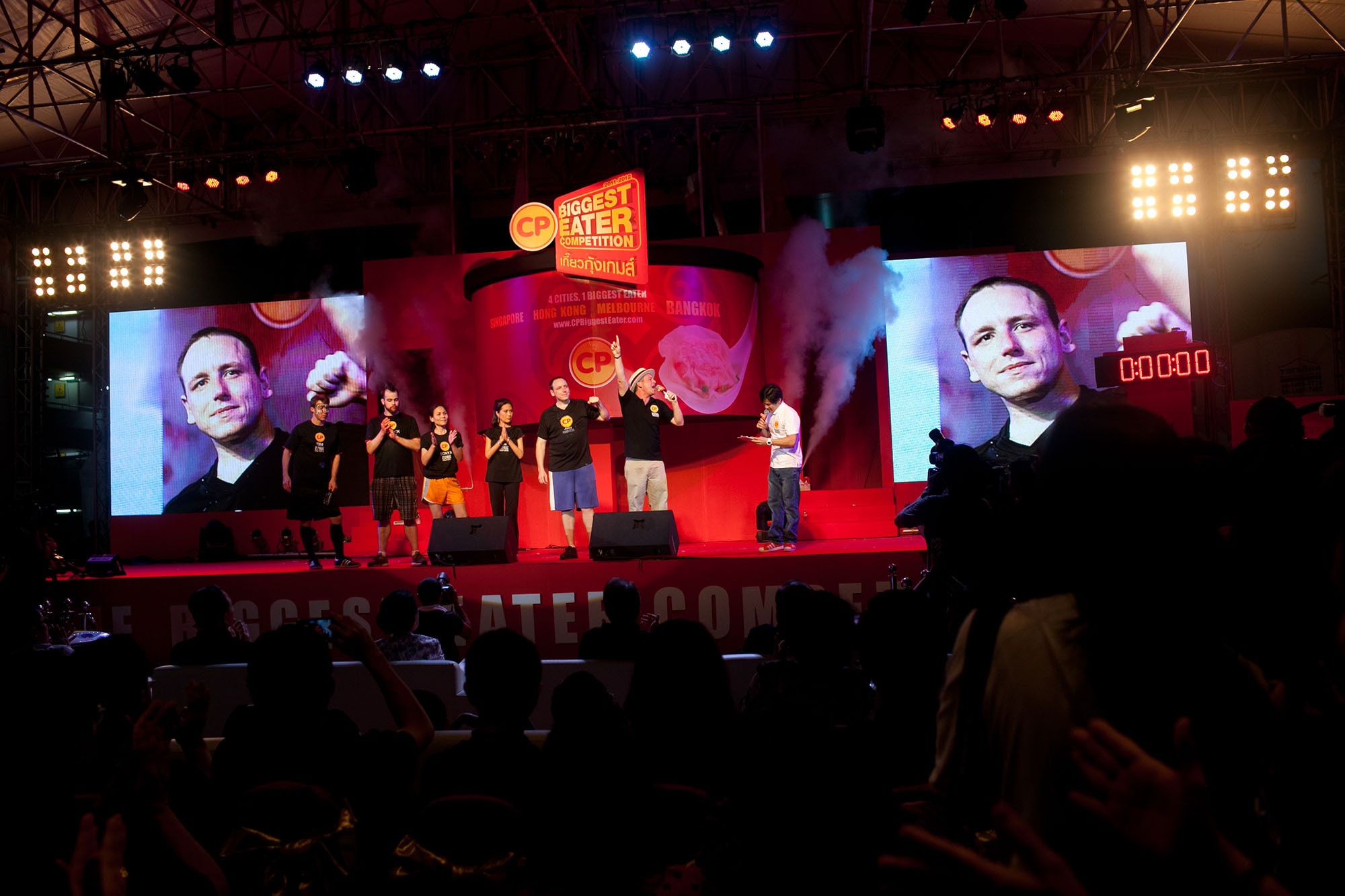 The CP Biggest Eater wonton eating content was an amazing contest with some of the best production value and brand recognition I’ve ever seen (and I’ve seen a lot of eating contests). And it was amazing to see some familiar faces and some awesome eating in Bangkok, to see not just one but two eating contests, to have my name dropped onstage by the emcee, to feel a little taste of home in Asia. 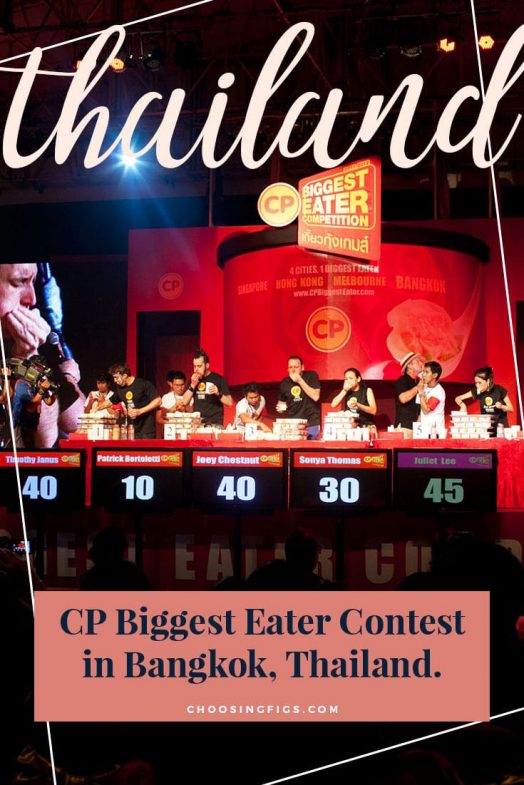 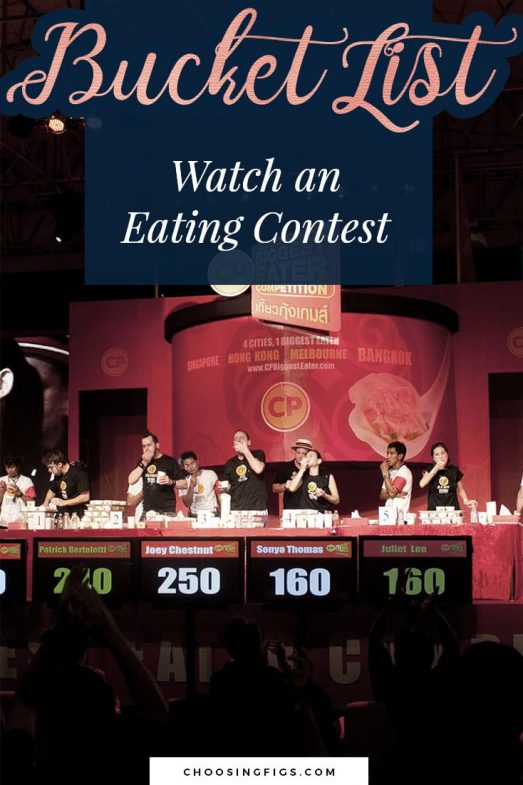 in Asia, Bangkok, competitive eating, Round the World, Thailand, travel
by Val Bromann

I can feel the devil walking next to me.

Next post
I can feel the devil walking next to me.