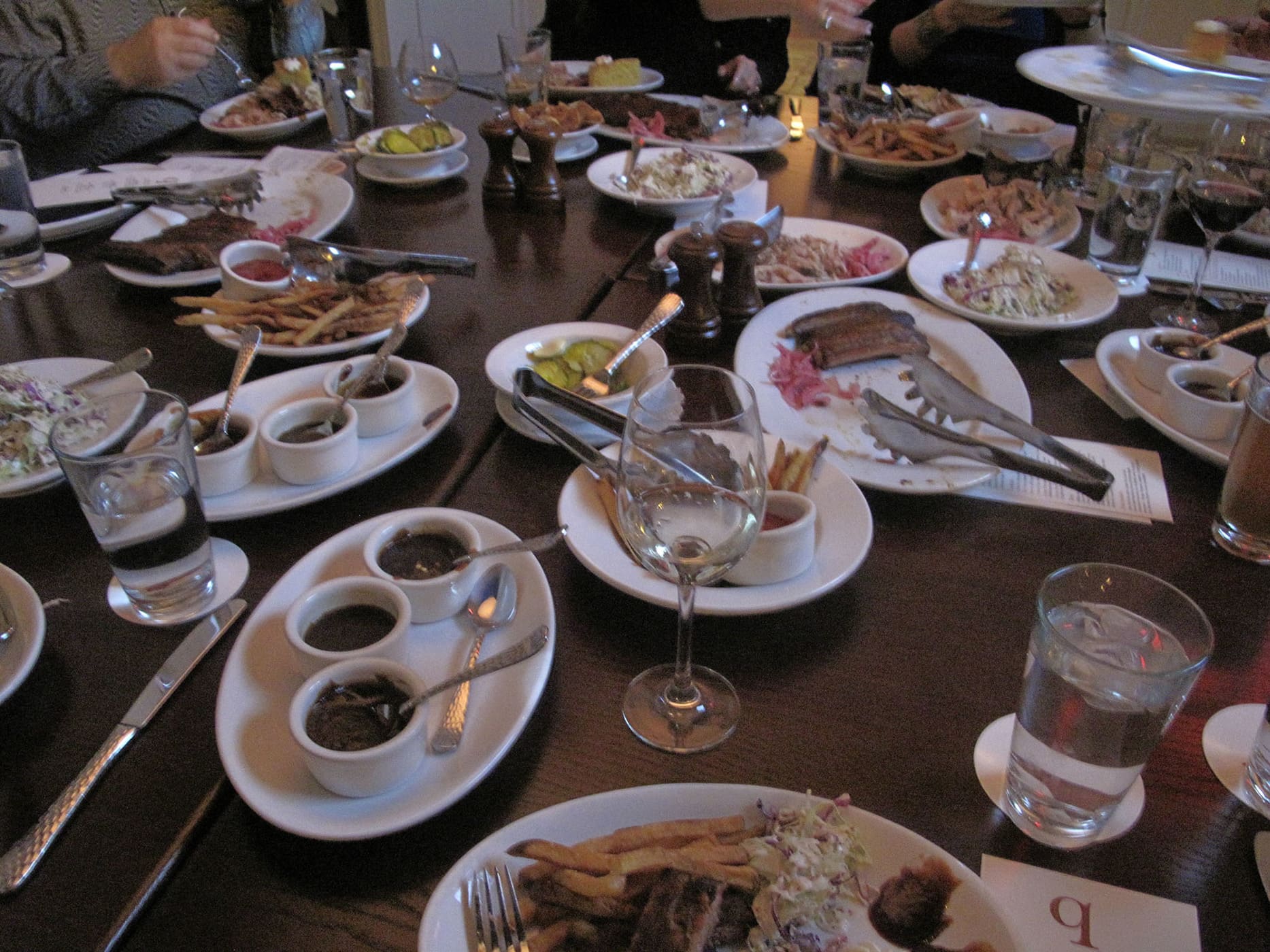 I’ve been having a lot of meals with “strangers” lately. It’s still kind of odd for me to put myself out there like that and meet up with someone, or multiple someones, I’ve never met. I’ll be the first to admit that I’m incredibly shy and that my social anxiety makes it all very nerve-racking to do. Especially getting food. Because I don’t like for people to see me eat, or what I’m eating. (Which I guess is ironic for someone entering an eating contest and for someone who posts photos of all the food she eats.)

But these past few years I’ve been on a self-induced therapy kick of forcing myself out of my comfort zone and trying to force this anxiety out of me. Or at least forcing myself to do things in spite of the anxiety. And, I mean, I guess if I’m going to travel the world, by myself, I’m going to have to get used to this eating with strangers thing, right? And considering I love to try new places to eat, and that most of my friends are either too poor or too far away it makes sense to seek out others to eat with.

A few weeks ago I met up with Patrick, a guy I know through Twitter who was in town for a few nights for work. He wanted to get dinner somewhere good. I suggested we head to The Bristol, because it’s away from downtown and because it was on the list I made of 200 or so Chicago restaurants I just need to try.

We made our way there and settled in for some delicious food and drinks. I got a Poire & Elderflower cocktail with Grey Goose Le Poire, St. Germain, white grape juice, and fresh sour…and it tasted like bad wine in an amazingly good way. Not bad wine per se, but the grape juice made it taste like that Welch’s fake wine we’d always get at holidays at home. And thus, it was delicious. 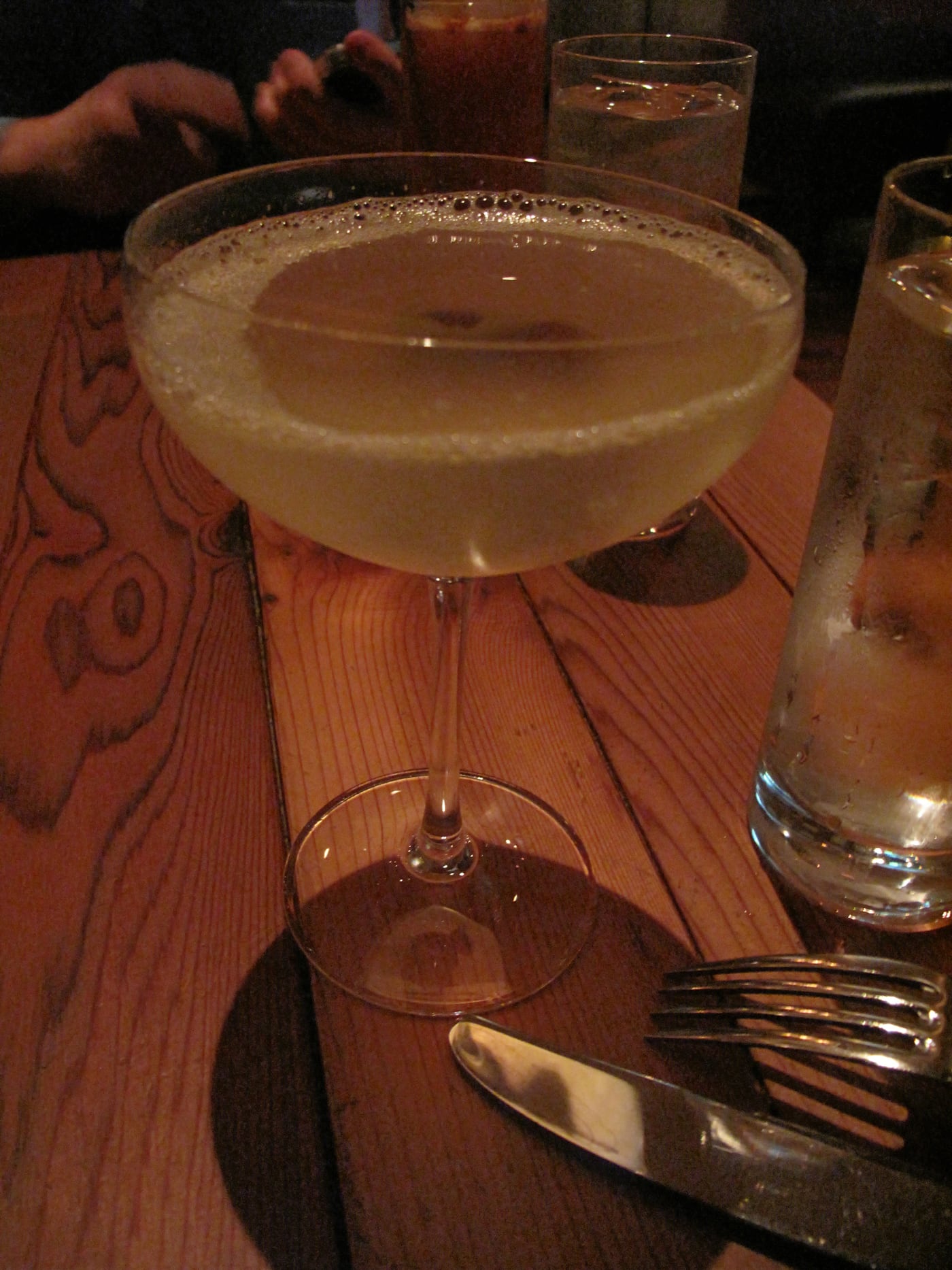 For my meal I got the pappardelle with suckling pig ragu. Which was delicious, but I am always disappointed when I order things with “ragu” because it comes out looking like ground beef when I had in my head something that looked more like a pig on a spit roast stuck on top of pasta. 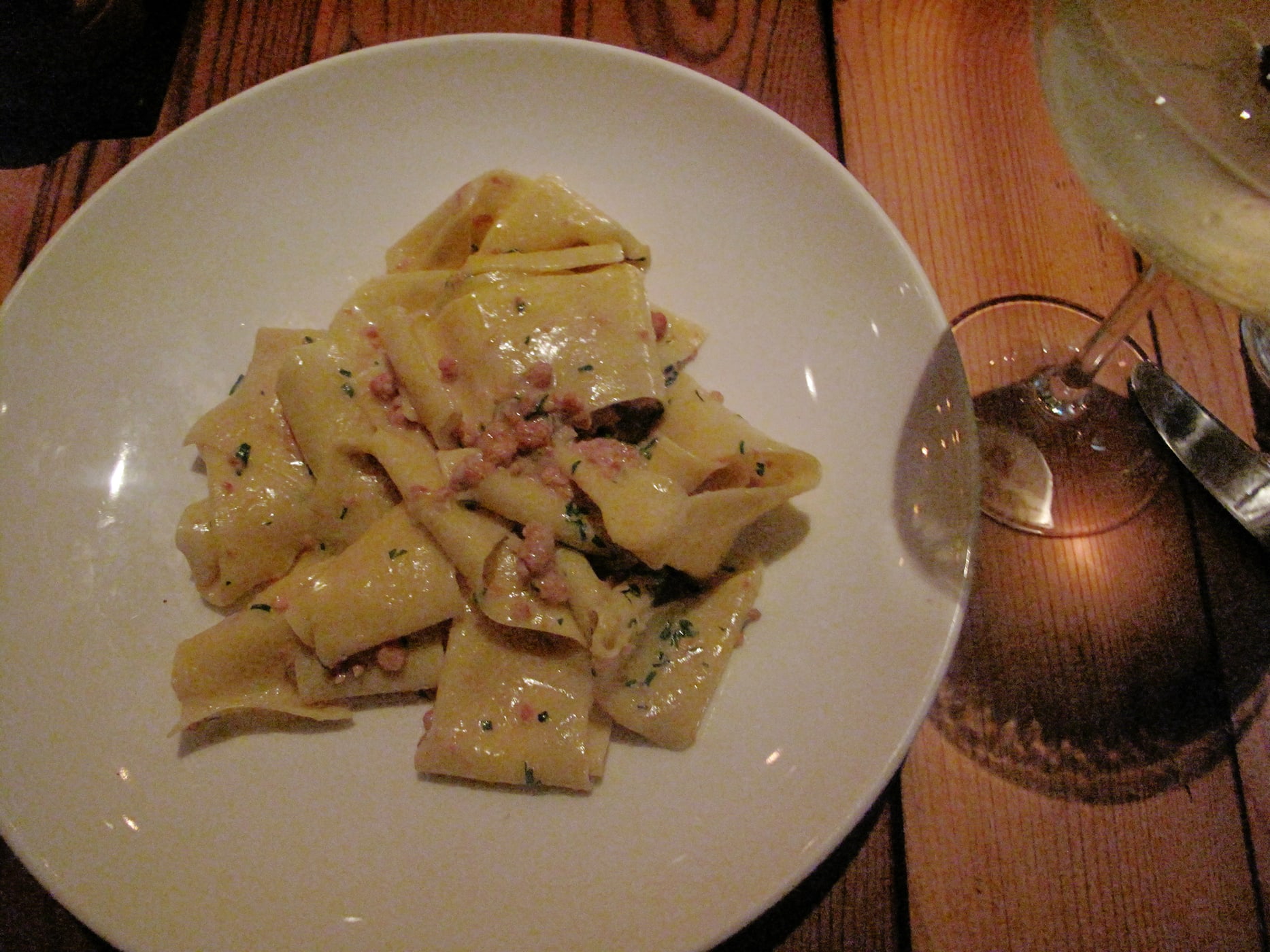 Afterward as we walked back to the train we decided to stop at Hot Chocolate for dessert. Yes, it’s a restaurant devoted to one of my favorite things in the world (OK, so I guess they have real people food there too) and no, I had never been there before.

I decided on a milkshake and Patrick got a hot chocolate. And see the overflow pitcher? I was not above drinking straight from that. 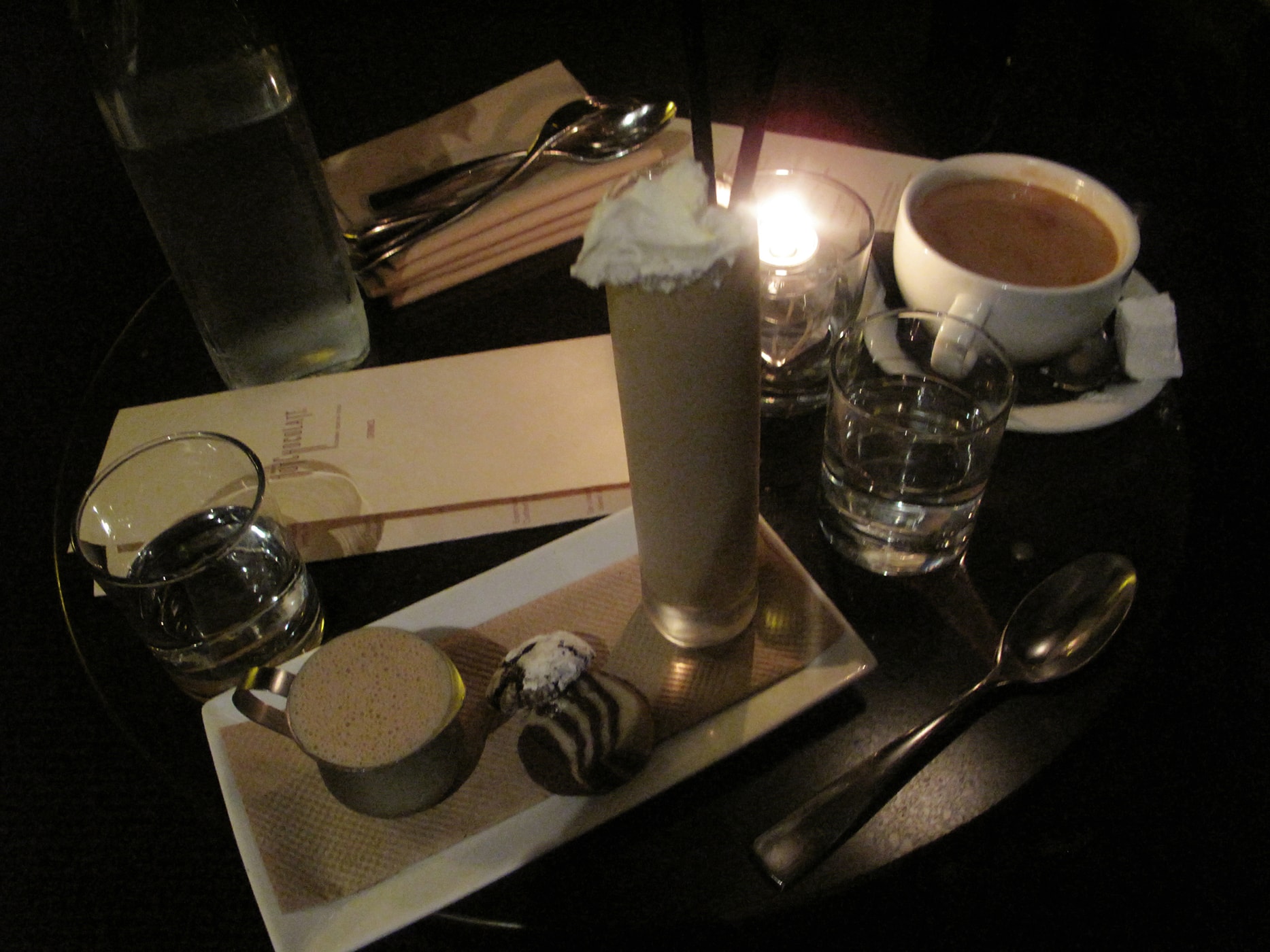 A couple of weeks later I met up with some others I know mostly through Twitter. Amanda from A Dangerous Business was in town and wanted to get some Chicago pizza with me and Katie. We met up at Gino’s East for some delicious pizza… 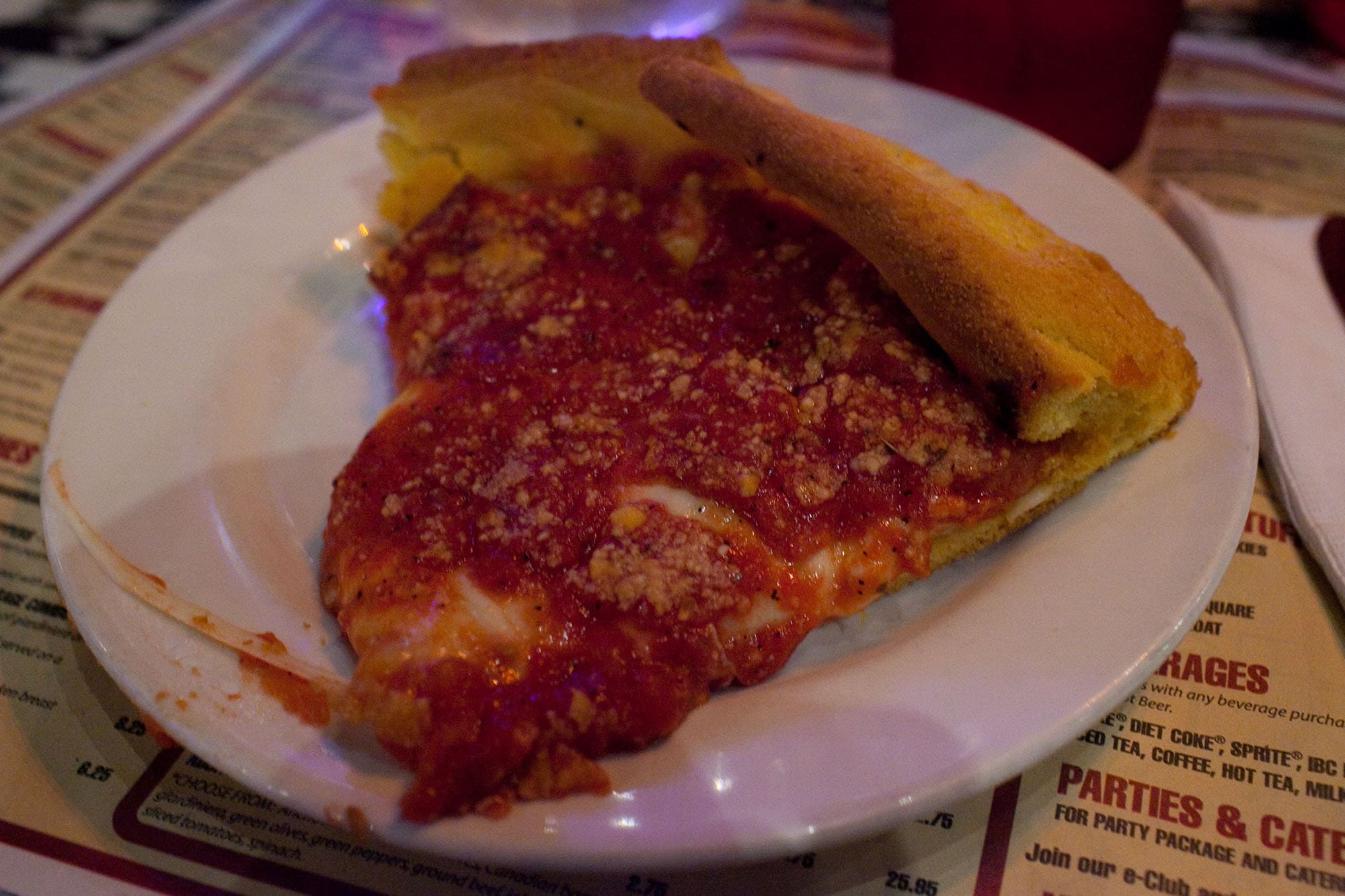 and then afterward we all headed up to the Playground to watch an improv show, which ended up being pretty hilarious. The ending group created a “play” from rehearsals to opening night based on a suggestion of a ping pong love story. I was amazed at how they were able to redo the same scene later over the course of the show (I can hardly remember what I said 30 seconds ago) and how they remembered their character quirks throughout. And I thing we all almost died laughing when the girl in the show said she knew a lot about ping pong because she was Asian because I think we had all recently read the same blog post.

A couple of weeks after that I made my way to Chicago Q for a GrubWithUs dinner. This was actually my second “social dining” meal where I reserved myself a place at a table full of strangers. Because, I mean, really, who can pass up delicious barbecue? I sure can’t!

It was a great night of getting to know a bunch of new people over amazing food. We started out with appetizers of chips, pickles (OMG I’ve never had a pickle this good in my life), Smoked Dry-Rubbed Wings, and House Bacon-Cheddar Hush Puppies. 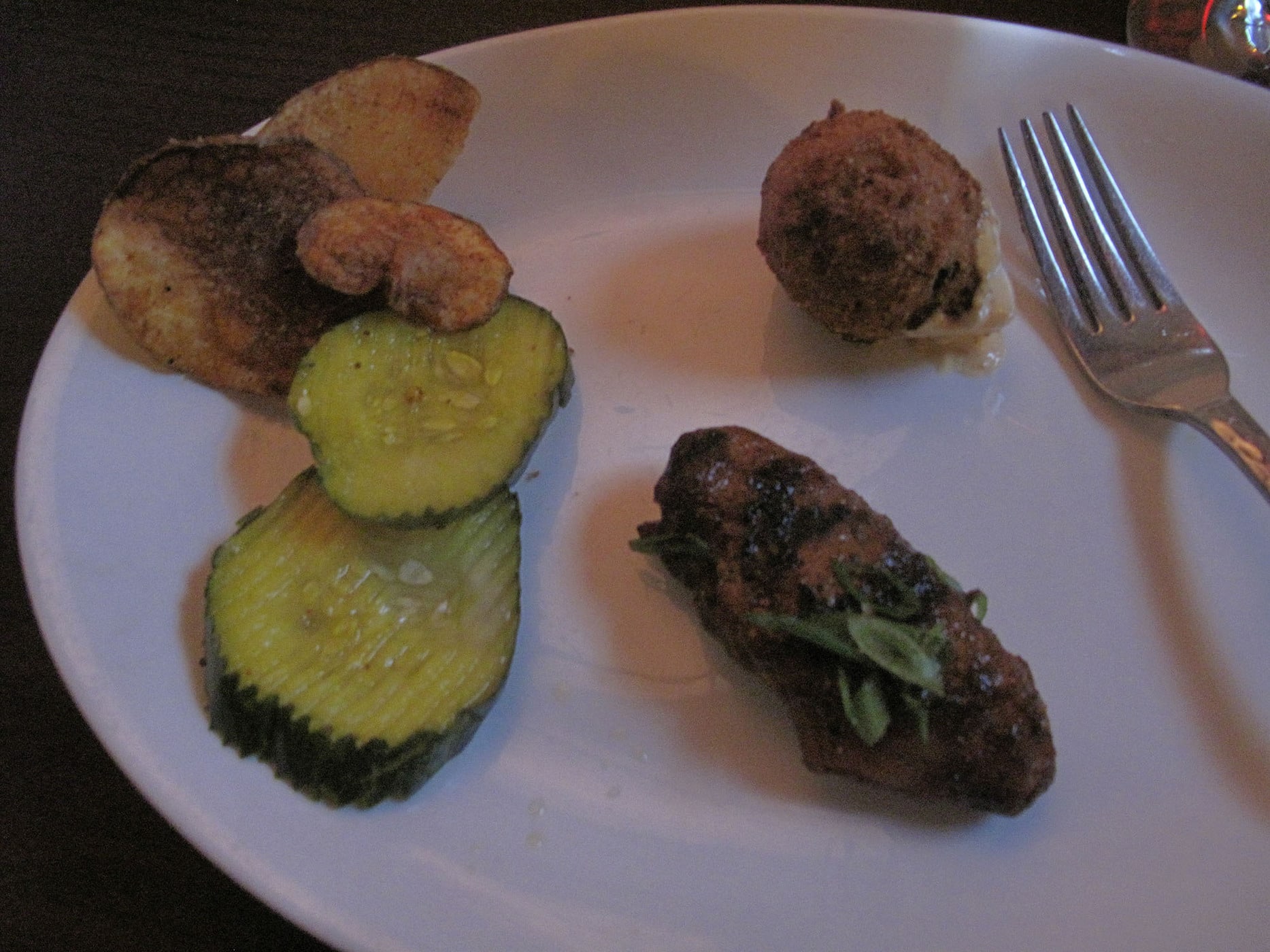 And then the rest of the food started arriving! 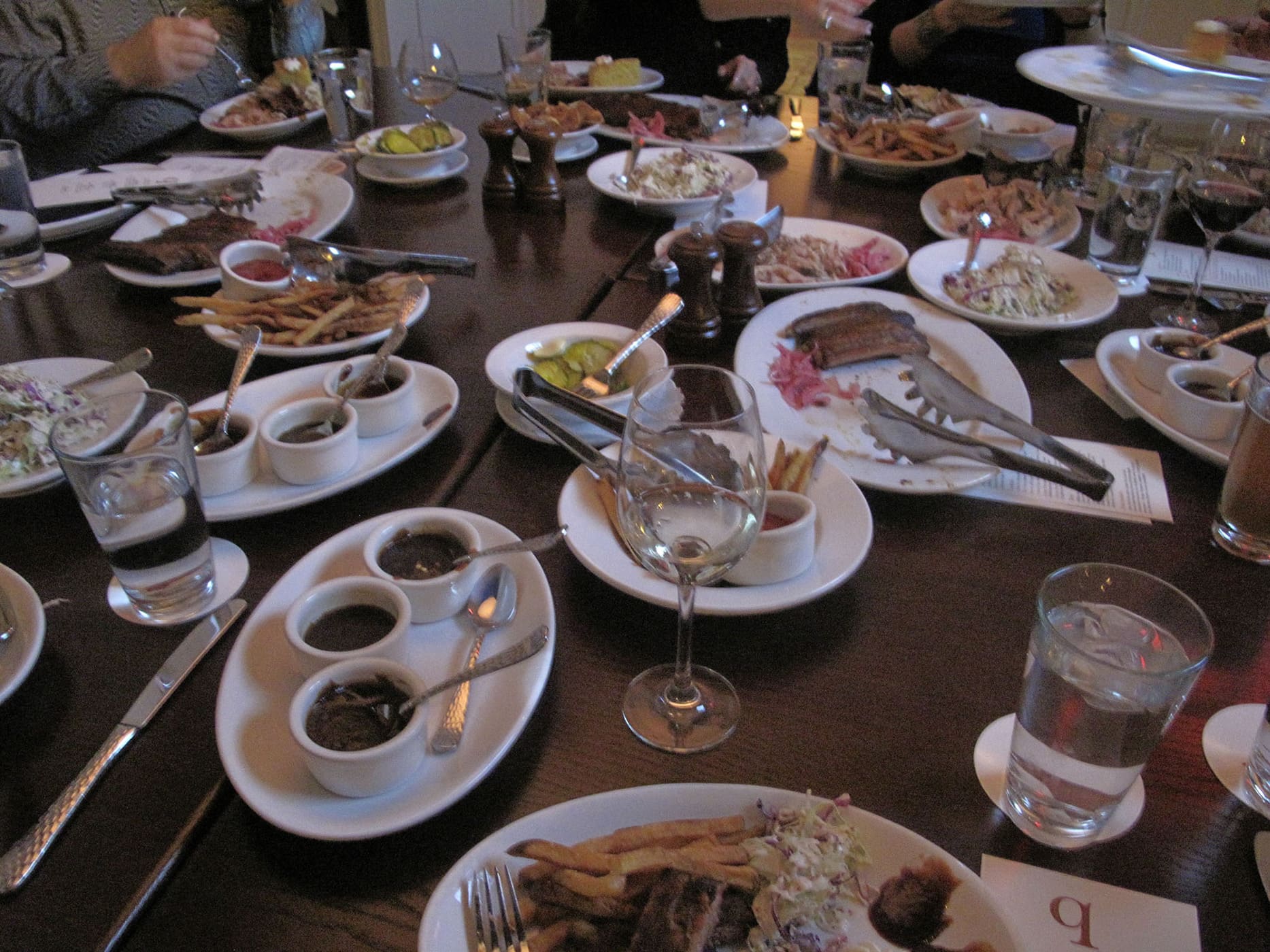 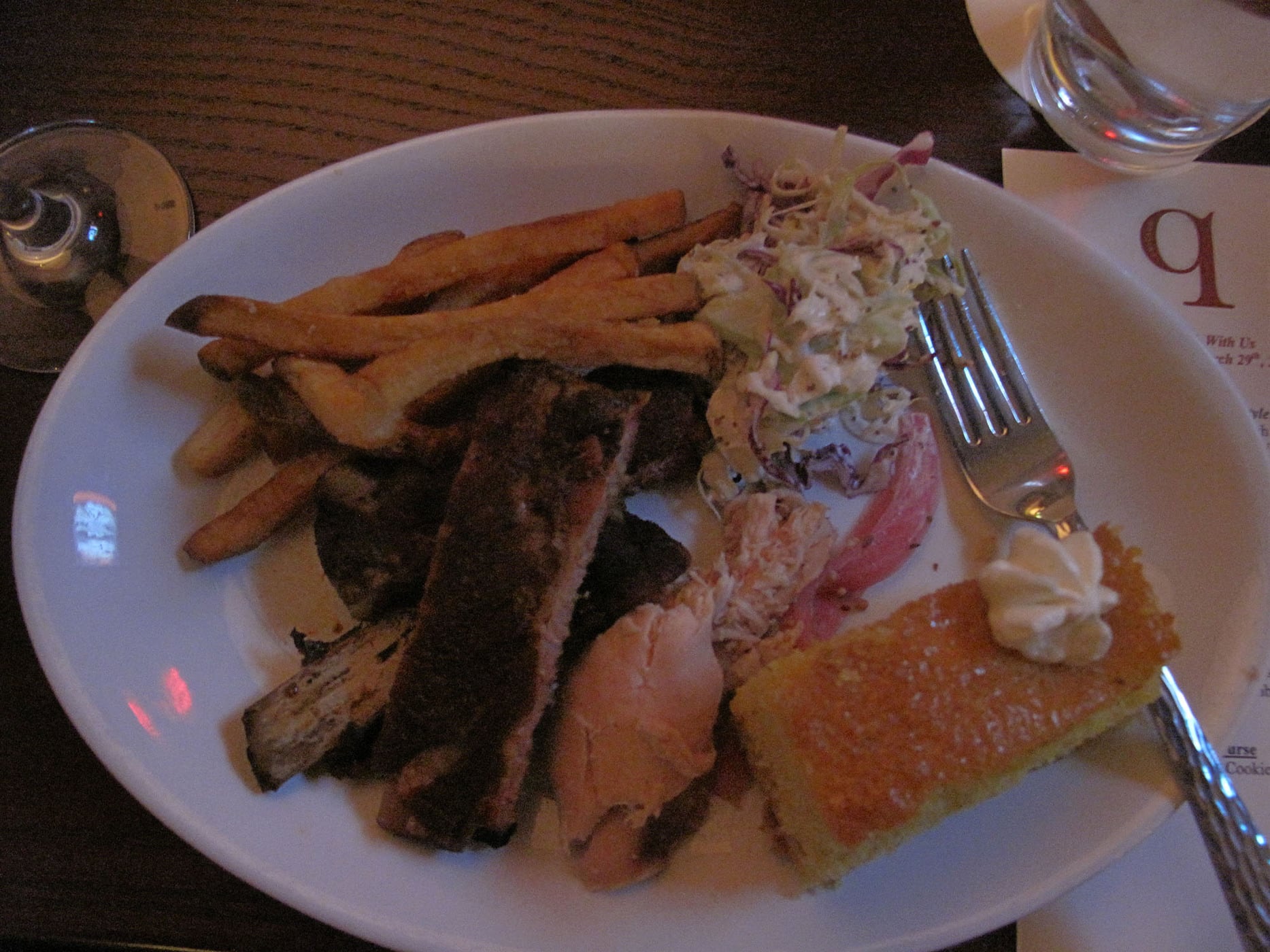 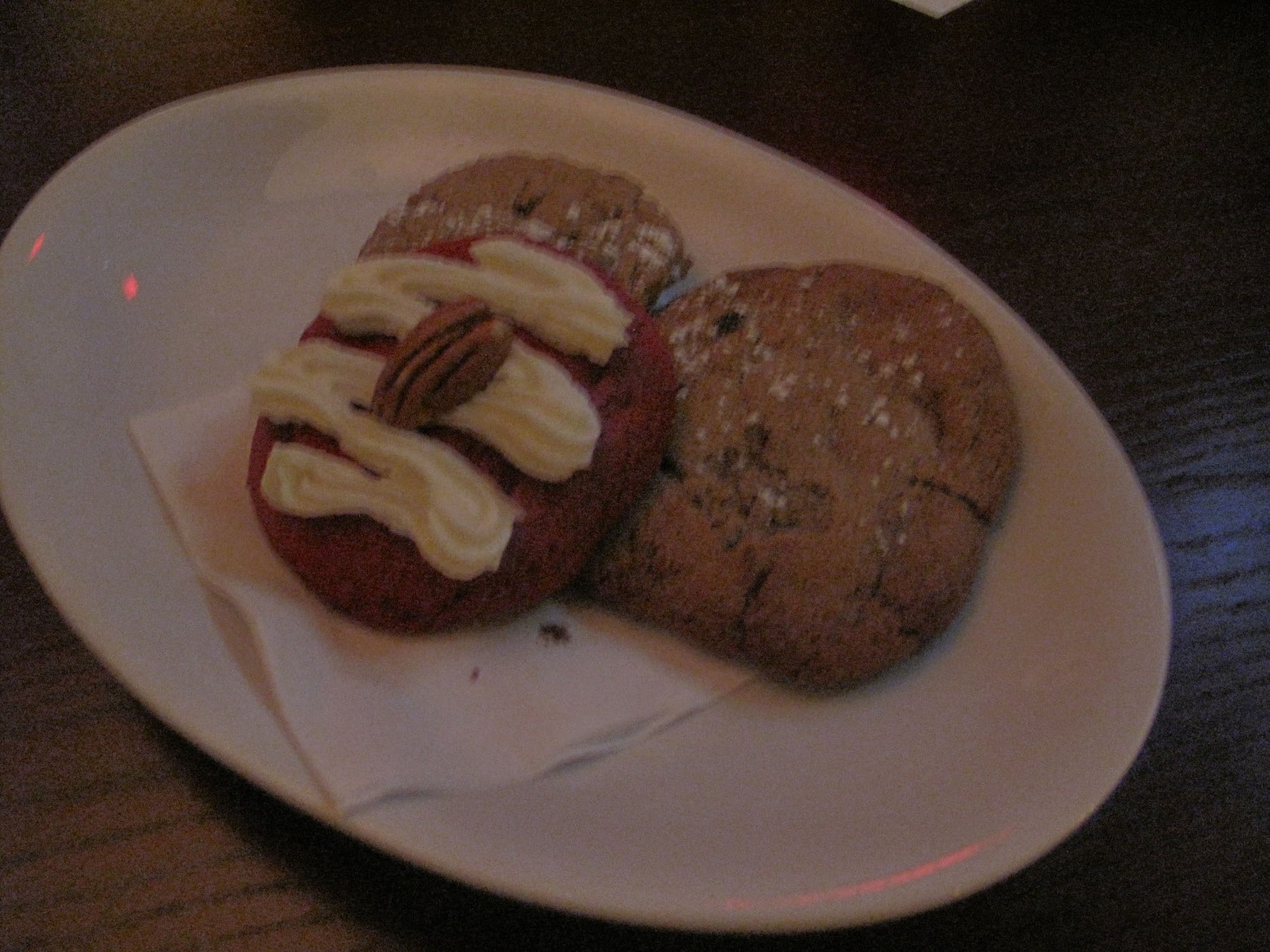 We even got to meet the chef, Lee Ann Whippen of BBQ Pitmasters fame! 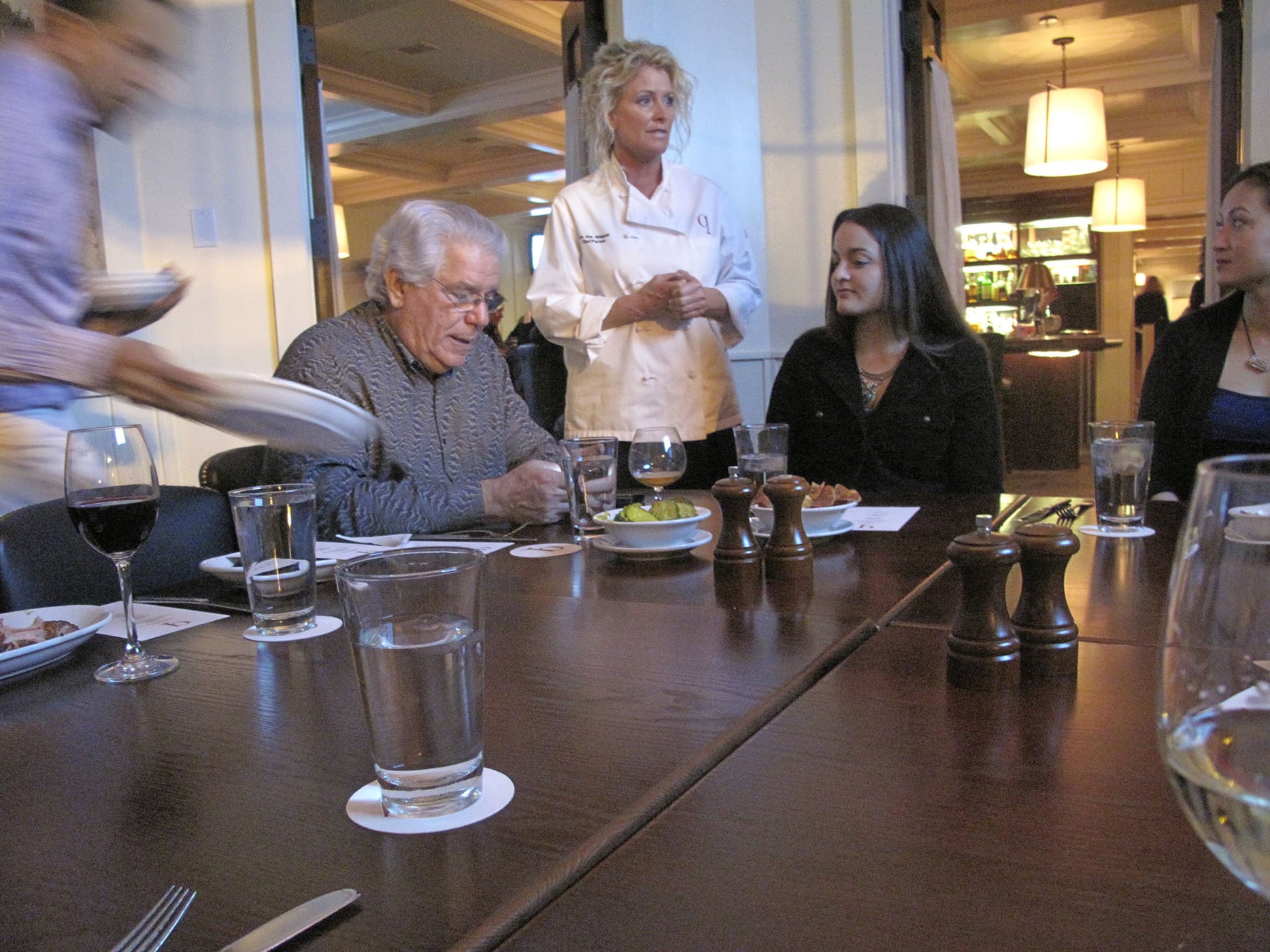 So I guess dining with people I don’t know isn’t so scary. And it’s been fun meeting new people and trying new foods and new places to eat. If you’re looking to eat with strangers yourself I highly recommend GrubWithUs and/or getting yourself a Twitter account. Because there are some great people out there. And we all have to eat, right?

in food
by Val Bromann

If someone’s going to entrust me with their goat, I’m going to need a lot more than $20…

Next post
If someone’s going to entrust me with their goat, I’m going to need a lot more than $20…

I always get kind of nervous to look back, in December, at the resolutions I had made for the year...