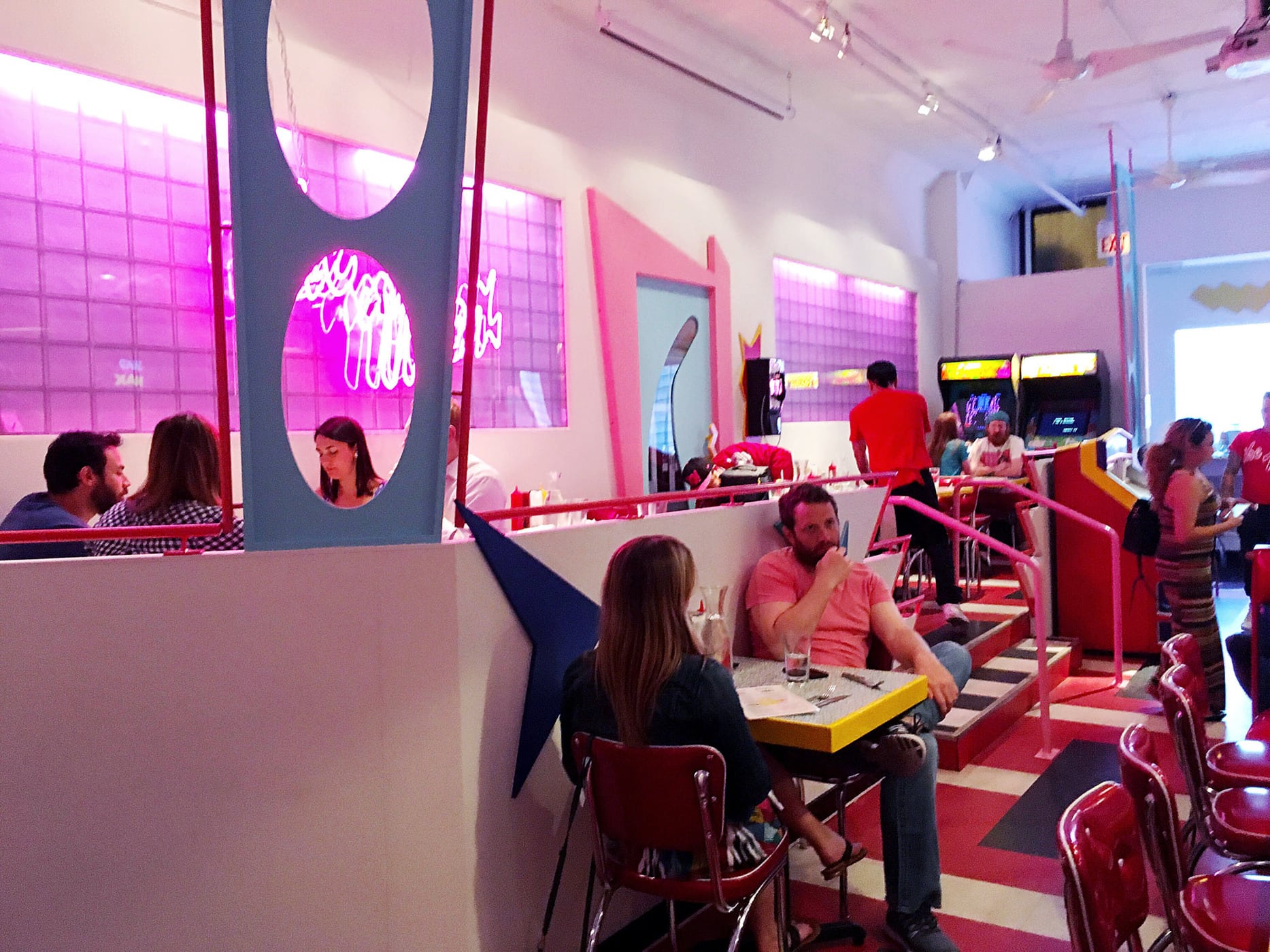 Home » Blog » Chicago Life » I ate at the Saved by the Bell restaurant and now my life is complete.

I ate at the Saved by the Bell restaurant and now my life is complete.

I was in third grade and he was both the coolest and the cutest boy I’d ever laid eyes on. Bleach blonde hair, striking hazel eyes. A class-clown meets bad boy in the most adorable way.

He had a cell phone 12 years before I had my first.

He could stop time. Literally.

I’d see him every Saturday morning and would laugh along with his antics, cry along with his broken hearts, hope for him to get out of detentions, wish for his success, and, though I really, truly, loved him with all of my nine-year old heart, still hoped he’d always get the girl.

Zack Morris was one of the first loves of my life.

Like many others who grew up in the late eighties and early nineties, Saved by the Bell was my Saturday morning ritual. I’d turn on NBC and be transported to Bayside High School. I’d follow Zack and A.C. Slater and Kelly Kapowski and Jessie Spano and Lisa Turtle and Screech and want nothing more than to be one of them. To be “Friends Forever.”

High school, for me, was still five years away at the time the show premiered, but I always thought Saved by the Bell would be my high school experience. Who didn’t dream of having that amazing core group of friends? Friends you spent every moment of your life with. Who didn’t dream that in their four years of high school there would be school plays to act in, beach clubs to work at, love triangles to be a part of, rock bands to sing in, and scheme after scheme after scheme. Who didn’t dream of having that perfect high school boyfriend who loved you so much he’d stage your own prom so you could be together, no matter what.

The Max was where all of the Bayside gang would hang out at after school. It was where they’d gather to eat Max burgers, share chocolate milkshakes with two straws, listen to the jukebox.

But I never had a Max in high school. I didn’t have anything like it, really. I guess my friends and I ended up hanging out at Starbucks or T.G.I. Fridays or Bakers Square. But there wasn’t that place. That one place everyone went to and everyone always was. There wasn’t our place. There wasn’t The Max.

When I first heard that a Saved by the Bell restaurant, Saved by the Max, was opening in Chicago this was pretty much my reaction…

And it was my reaction again the morning reservations opened and Saved by the Max Chicago tickets went on sale.

Saved by the Max was only to be a pop-up restaurant and only to be open through June, giving diners only 30 days to experience its wonder. Brunch and late-night would be open first-come first-served, but if you wanted to make sure you’d get in, a reservation was necessary. And it was necessary that I would have one. Necessary. When Saved by the Max reservations went up they sold out almost immediately.

And I was lucky enough to snatch one up for the second night.

Since the Saved by the Bell restaurant reservations sold out so quickly, they ended up extending the run for two more months and are still talking about extending it further. When I arrived for my reservation there was a line of people down the block hoping to get a spot, so, as long as those lines keep up, I imagine extending is in the future.

But, in any case, I got to experience The Max, the Saved by the Bell diner, Saved by the Max, on its second night.

And it was everything I dreamed for it to be and more. 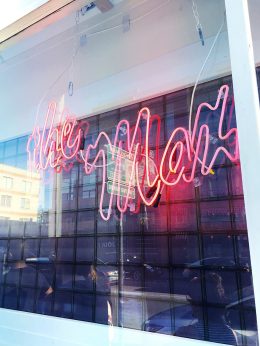 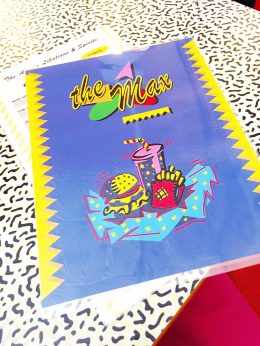 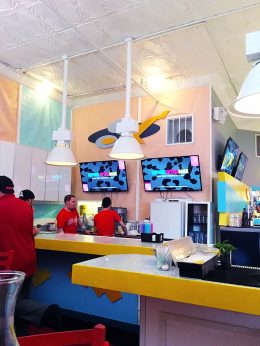 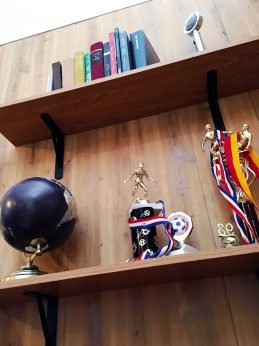 Mr. Belding’s office at Saved by the Max 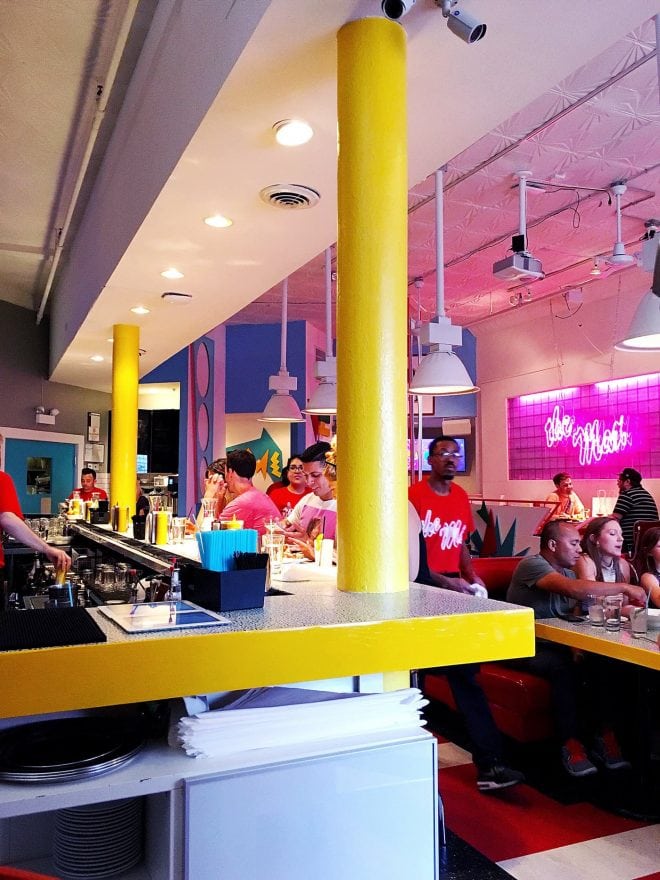 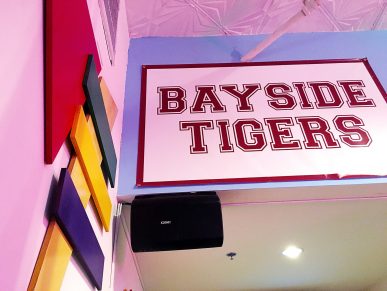 Bayside Tigers – Saved by the Max 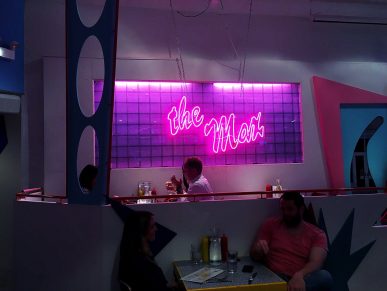 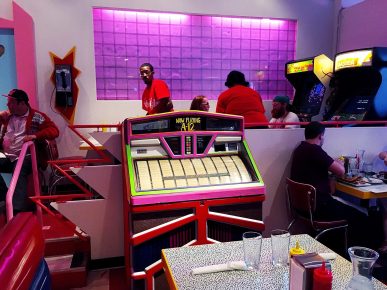 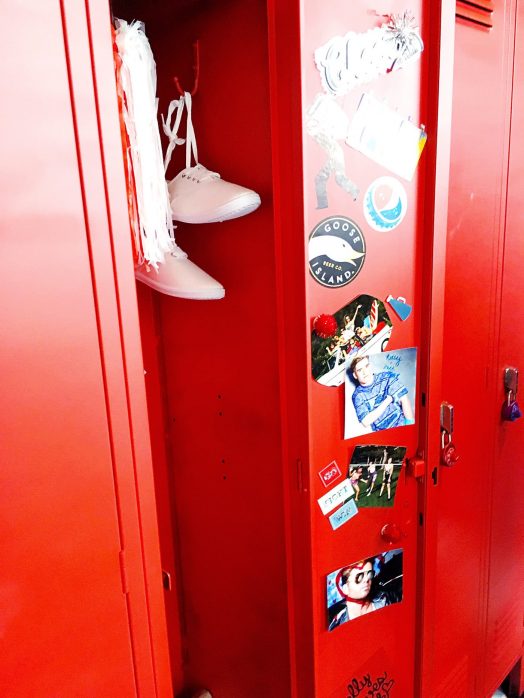 Locker at Saved by the Max 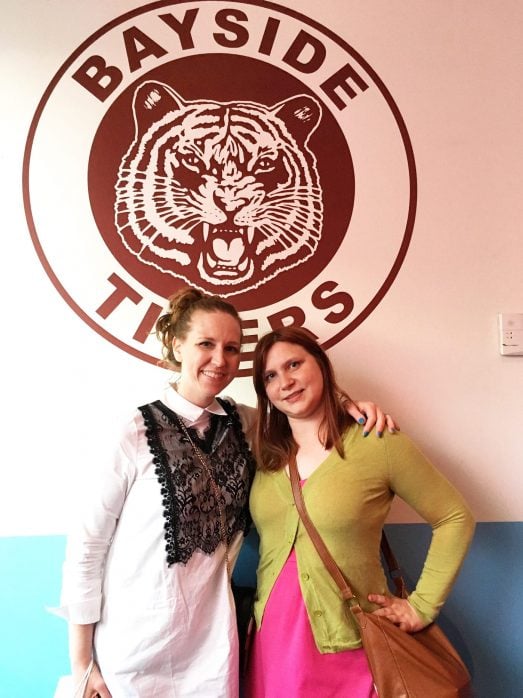 Me and Emily at Saved by the Max

I went to Saved by the Max with my friend Emily and we were immediately sent to Mr. Belding’s office, which sounds about right. (The waitress asked if we were caught smoking in the bathroom but really it was probably for sneaking into the boy’s locker room…just sayin’.) Our table was in a little nook decorated to be just like the principal’s office: from diploma’s on the wall to a photo of his wife and child after birth to Bayside trophies to a filing cabinet for Zack’s permanent record.

Though we were in the principal’s office, from our seats we could see The Max in all it’s glory. The details were excruciatingly on point: the neon signs in the window, the jukebox, the video game consoles, the pattern-spiked formica tables and red vinyl booths, the 80s- and 90s-inspired splashes of purples and pinks and reds and yellows and patterns that sort of said “Lisa Frank was here.” Or at least Lisa Turtle.

We were in The Max.

And I was as giddy as a high schooler at Bayside High on senior ditch day.

As giddy as the nine-year-old who fell in love with Zack Morris and a Saturday-morning sitcom.

It was a childhood dream come true. 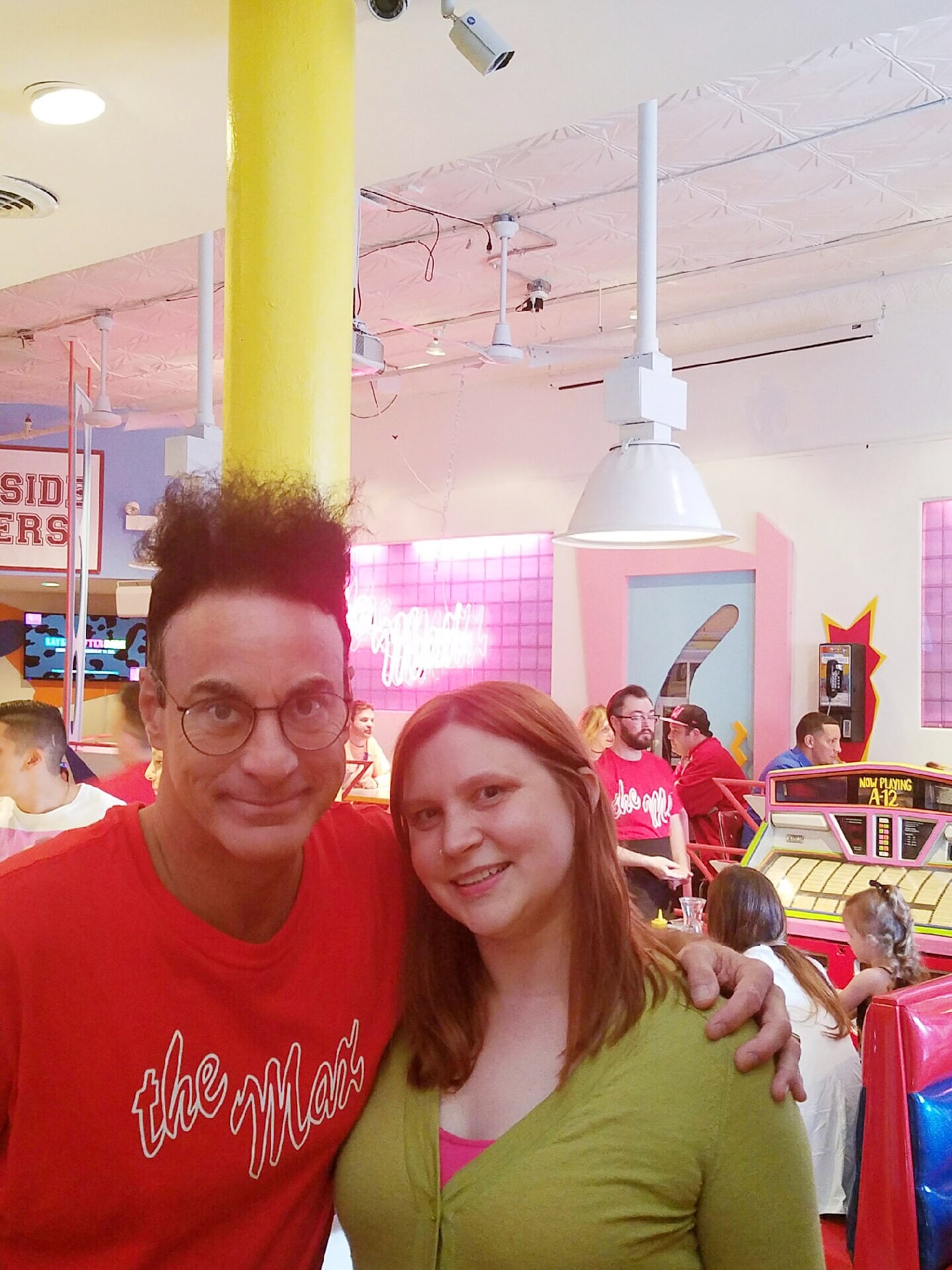 What I ate at Saved by the Max

One of the first things everyone asks me about Saved by the Max is, “but how is the food?” It makes sense, I mean, gimmicky restaurants aren’t usually known for having the best food. Usually you’re paying (and paying a lot) for the experience itself, not the cuisine. That said, the food was pretty solid. Some of the choices were hit or miss but all-in-all it was a very good meal, themed or not.

In order to make a reservation, you had to buy a $35 ticket (plus tax and a 20% service charge). But that ticket included a three-course meal: appetizer, entree, and dessert. Since I went with a friend we split appetizers and desserts and each got our own entrees. Here’s what I ate at Saved by the Max… 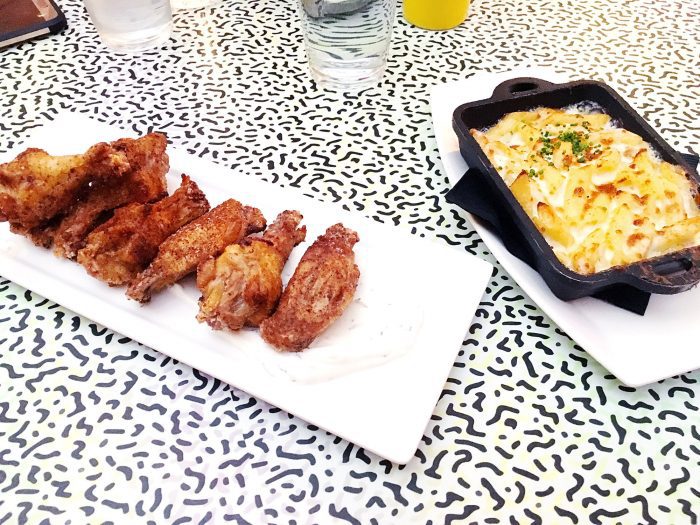 Appetizers at Saved by the Max: Snow White and the Seven Dorks and Mac and Screech 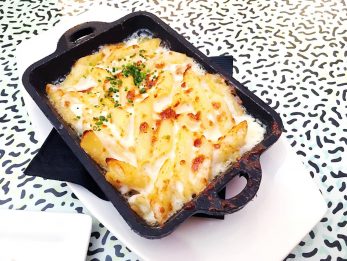 Mac and Screech at Saved by the Max 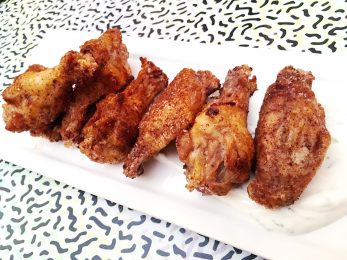 Snow White and the Seven Dorks – Lebanese spiced chicken wings at Saved by the Max. 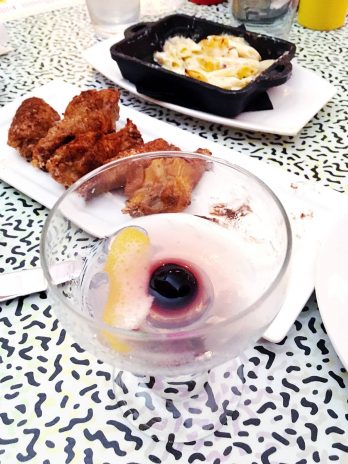 Mark Paul 75 cocktail at Saved by the Max 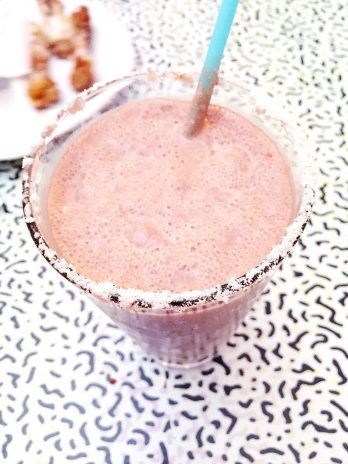 All in the Malt cocktail at Saved by the Max 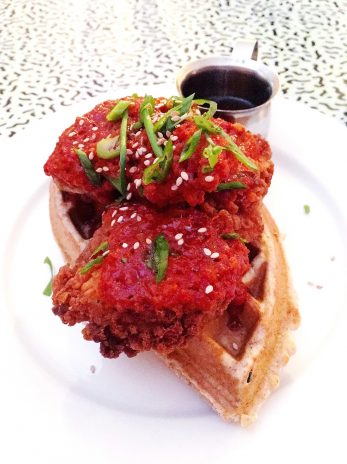 Tori’s Fried Chicken at Saved by the Max 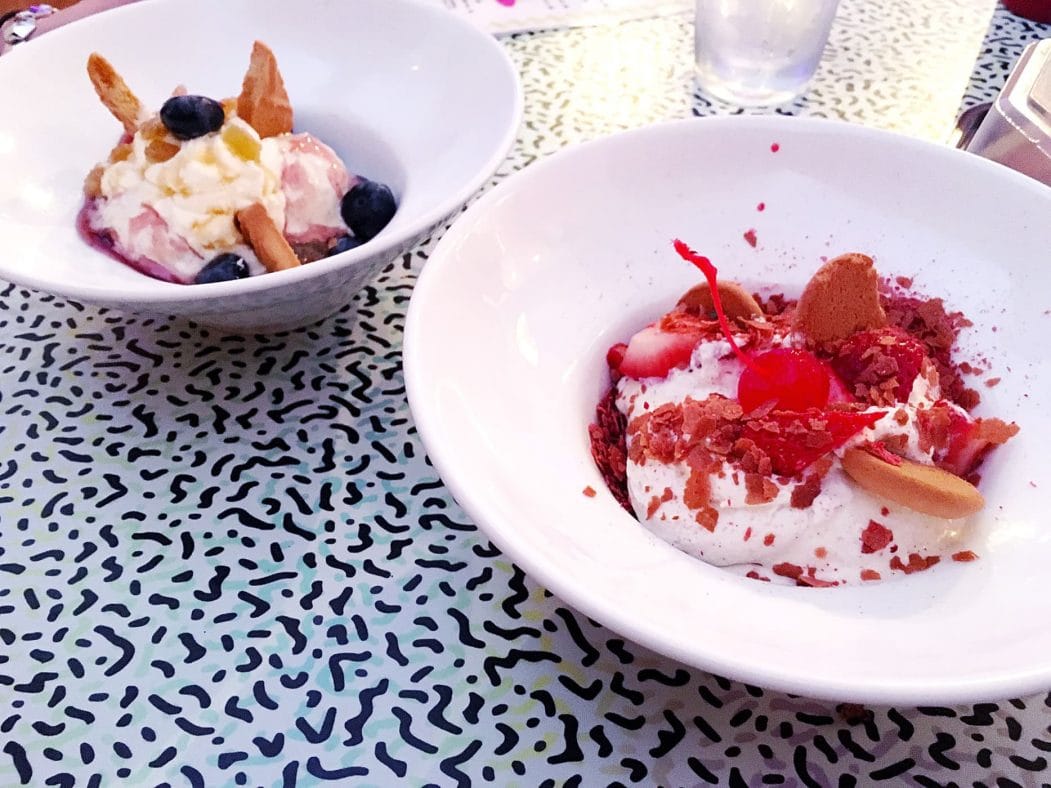 Max’s Magical Sweet Tooth and Snack Attack at Saved by the Max.

Let’s start with the drinks. My first choice was obviously the Mark Paul 75 named for the real-life name of my childhood crush (but let me be perfectly clear: I did not have a crush on Mark Paul Gosselaar, I had a crush on Zack Morris). This drink was a take on the French 75 and was tart and tasty, definitely not something you’d usually sip while sitting in a diner…or the principal’s office…

All in the Malt

If you know me at all you know I kind of have a thing for milkshakes. You also probably know I like to drink alcohol. So, while the menu also had some tasty sounding milkshakes, the dangerously sweet All in the Malt — made with almond-infused Jameson, espresso liqueur, and chocolate ice cream — was the perfect compromise between milkshake and booze.

The Mac & Screech (their take on mac and cheese if you really can’t figure that out) used a heartier penne than normal macaroni and was swimming in a lush and sweet creamy cheese sauce with just enough charred crust for a bit of crunch. It was definitely more elevated than most diner mac and cheese…and most things Screech’s name would be attached to.

Snow White and the Seven Dorks

Named for the show’s famed retelling of Snow White, the Snow White and the Seven Dorks entree were Lebanese chicken wings that were crisp and aggressively spiced. Though, while I get that there were seven wings to replace seven dorks to replace seven dwarves…adding in that eighth dork not only made the musical, it might have made sharing a bit easier.

Just as you were never quite sure why Tori was on the show in the first place and always found her presence inferior to Kelly and Jessie’s, thus was Tori’s Fried Chicken. The Goose Island and coconut milk waffle topped with Korean fried chicken sounded intriguing, in theory, and the flavors were good. But the breading was kind of mushy and fell off easily, making me kind of wish for the original characters (AKA my appetizers) to be back.

There were several choices for dessert at Saved by the Max from Bang Bang Pie slices to a pretty standard sundae. But, when in Rome (and when dessert is already included in your ticket), go for the most obnoxiously absurd sounding desserts on the menu. Always. Max’s Magical Sweet Tooth had blueberry muffin ice cream topped with Red Bull blueberry jam among four or five other toppings. Snack Attack had a base of Twinkie ice cream and was topped with fresh strawberries and cream. Both were tasty though probably unnecessary and I’ll probably have to spend an extra ten hours at the gym to work them off.

Watch my Snapchat Story from Saved by the Max 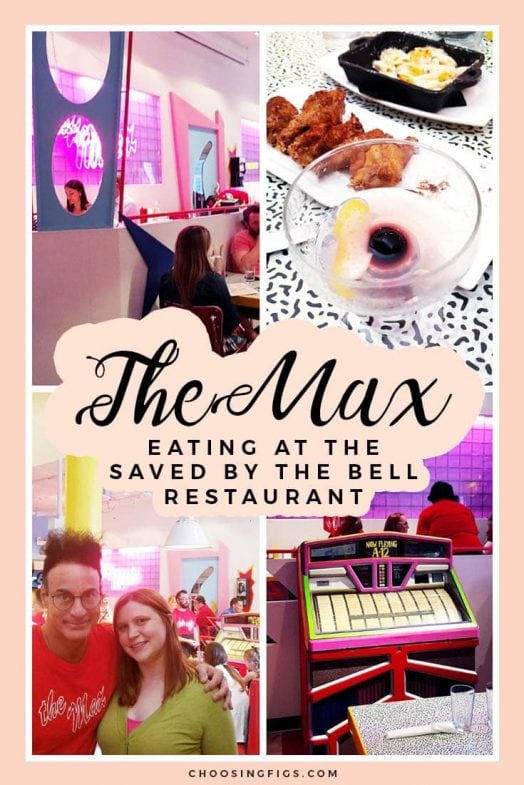 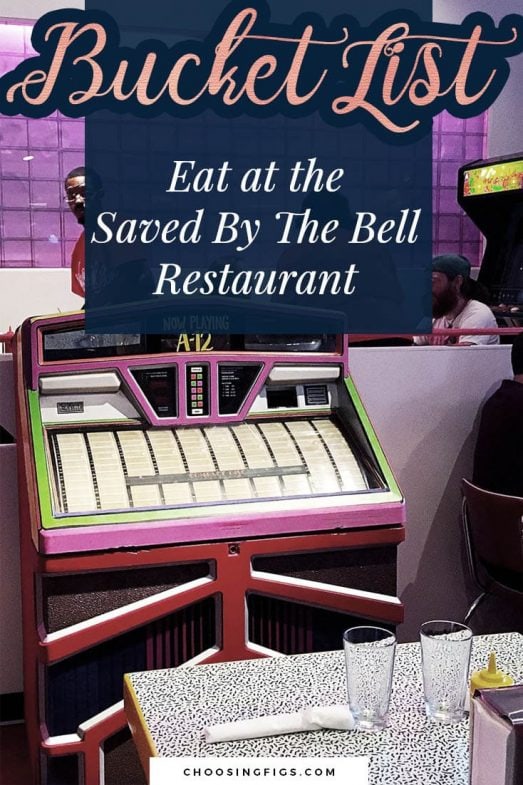 Did you watch Saved by the Bell? Will you make it to Saved by the Max? Did you have a crush on Zack or Slater?