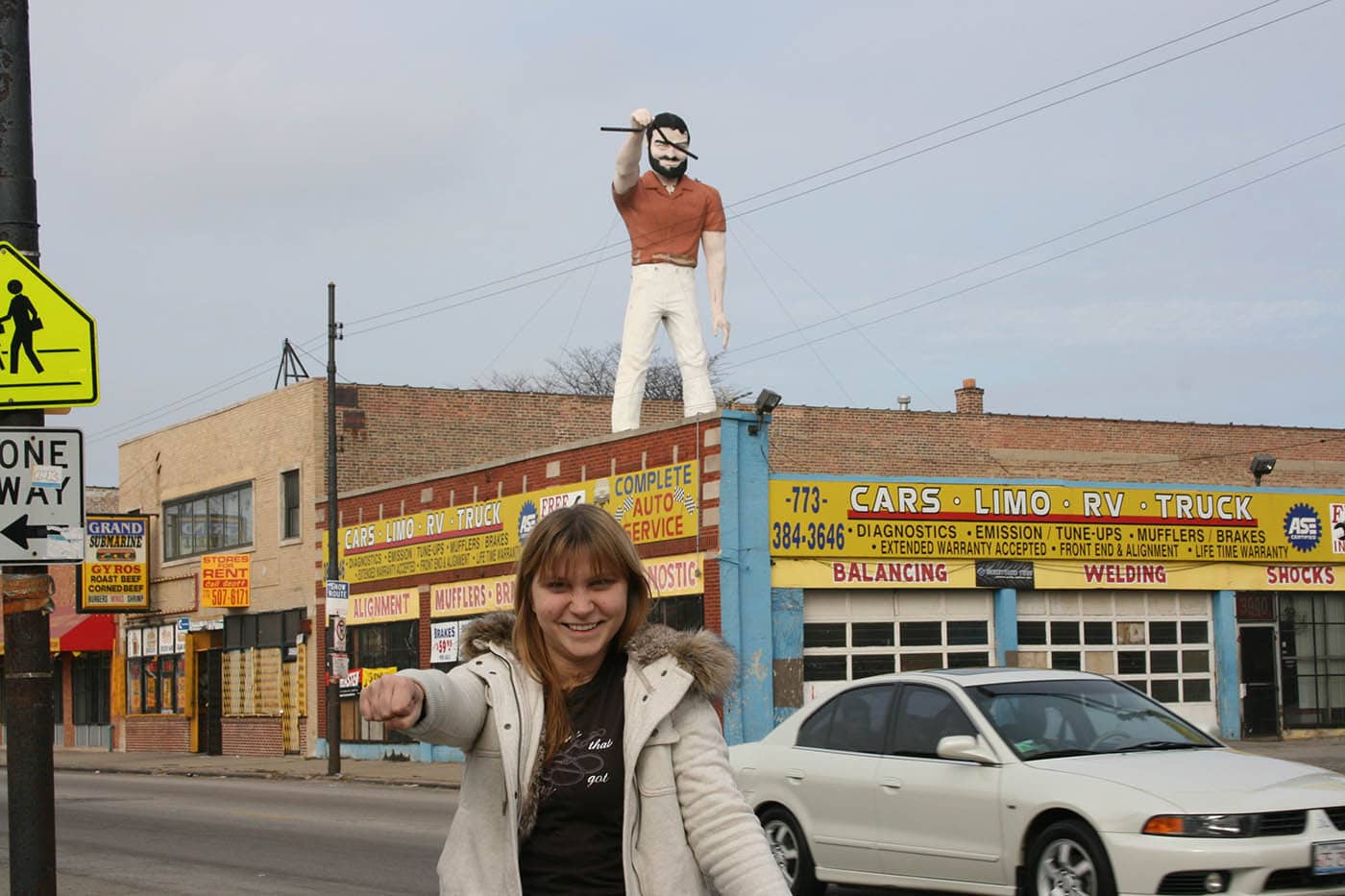 Home » Blog » Road Trip » Have you seen the muffler man? A Road Trip Around Chicago.

Have you seen the muffler man? A Road Trip Around Chicago.

Sunday Emily and I took a road trip around Chicago. OK, so I am not sure if it really counts as a road trip if the whole thing takes less than twelve hours and you go no further than 45 miles away from home…but it was a damn fun time and we saw many Chicago roadside attractions…

I picked up Emily around 10am for our day trip and we wound our way around Chicago to find our first destination. Earlier in the summer I’d taken an Illinois road trip to find the weirdest roadside attractions in the state but this time we planned to stay a little closer to home.

Roadside Attractions on a A Road Trip Around Chicago:

The first stop on our Chicago road trip was about a mile west of Humboldt Park on Grand and Pulaski: a Mr. Bendo Muffler Man statue. This road trip around Chicago was all about the Muffler Man roadside attractions we saw a few of these babies around Chicagoland. This one was curious to me because his one arm was down instead of both being (as tradition dictates) out in front. 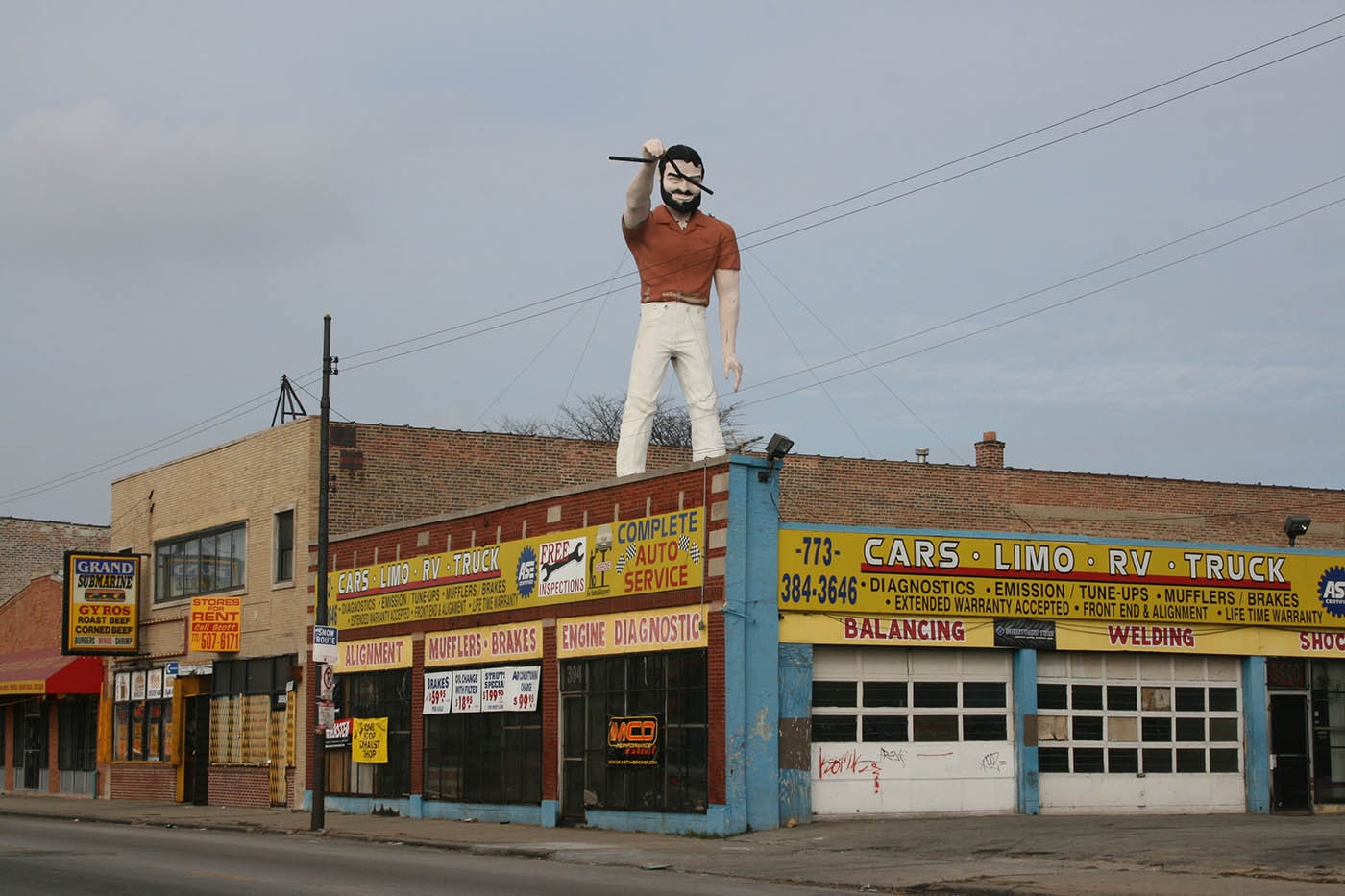 We then took off down Grand further into Elmwood Park to find the Radio Flyer Factory and a frickin huge wagon! It was huge! Being Sunday it was, unfortunately, closed and gated off, but we parked in the strip mall across the street to take pics of the World’s Largest Radio Flyer Wagon. 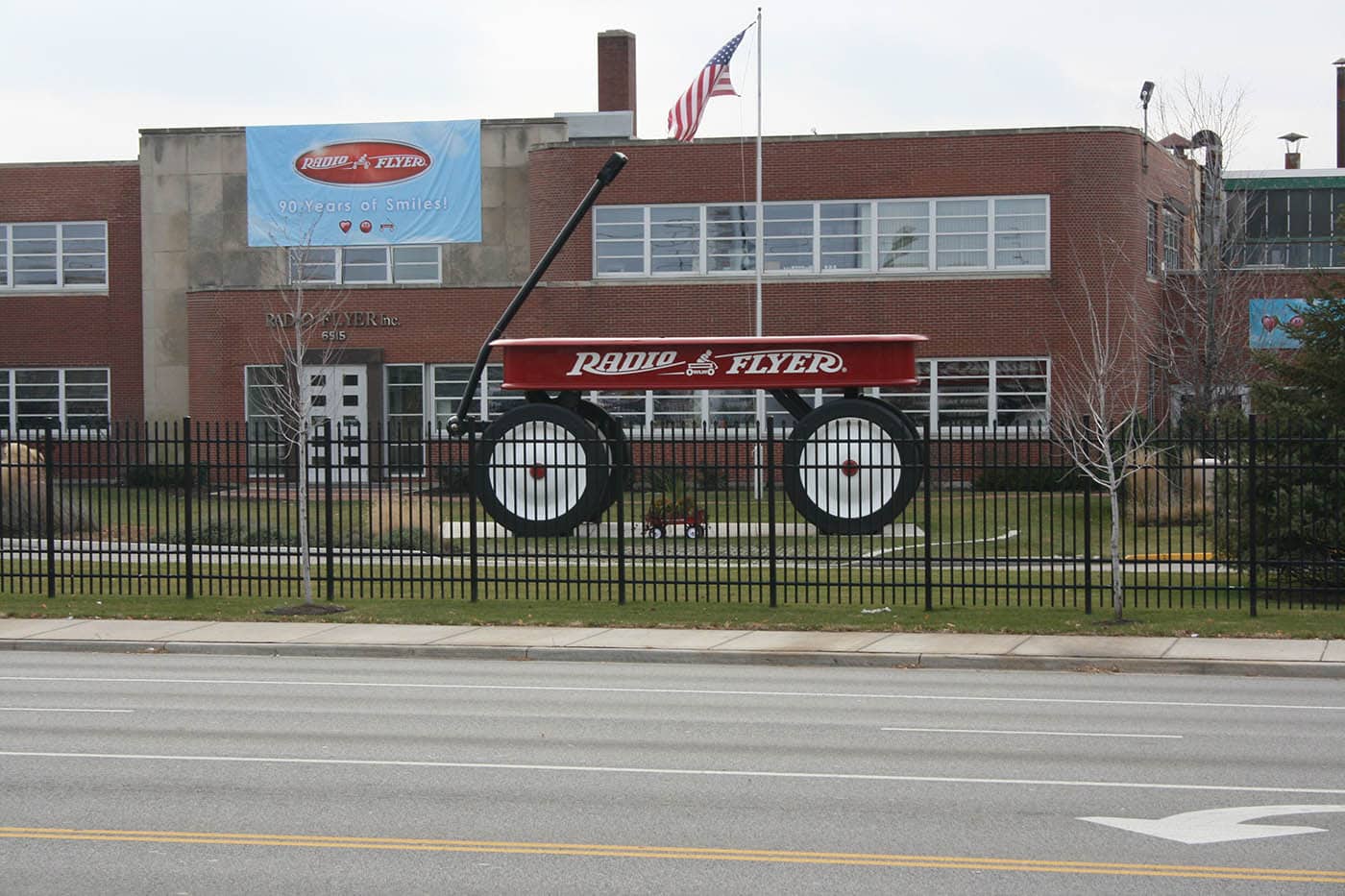 Then it was on to Pisa, Italy…errr…I mean Niles, Illinois…for the Leaning Tower of Niles! This replica of Italy’s Leaning Tower of Pisa is roughly half-sized (94 feet vs. 177 feet) and leans about 7’4″ off plum (Pisa has a 15 foot tilt) and sits in front of a YMCA. Being holiday season the tower was decked out for Christmas in garland and bows. Purdy. Considering I was too food poisoned to want to take a train ride to the real thing last summer, this made a nice substitution. 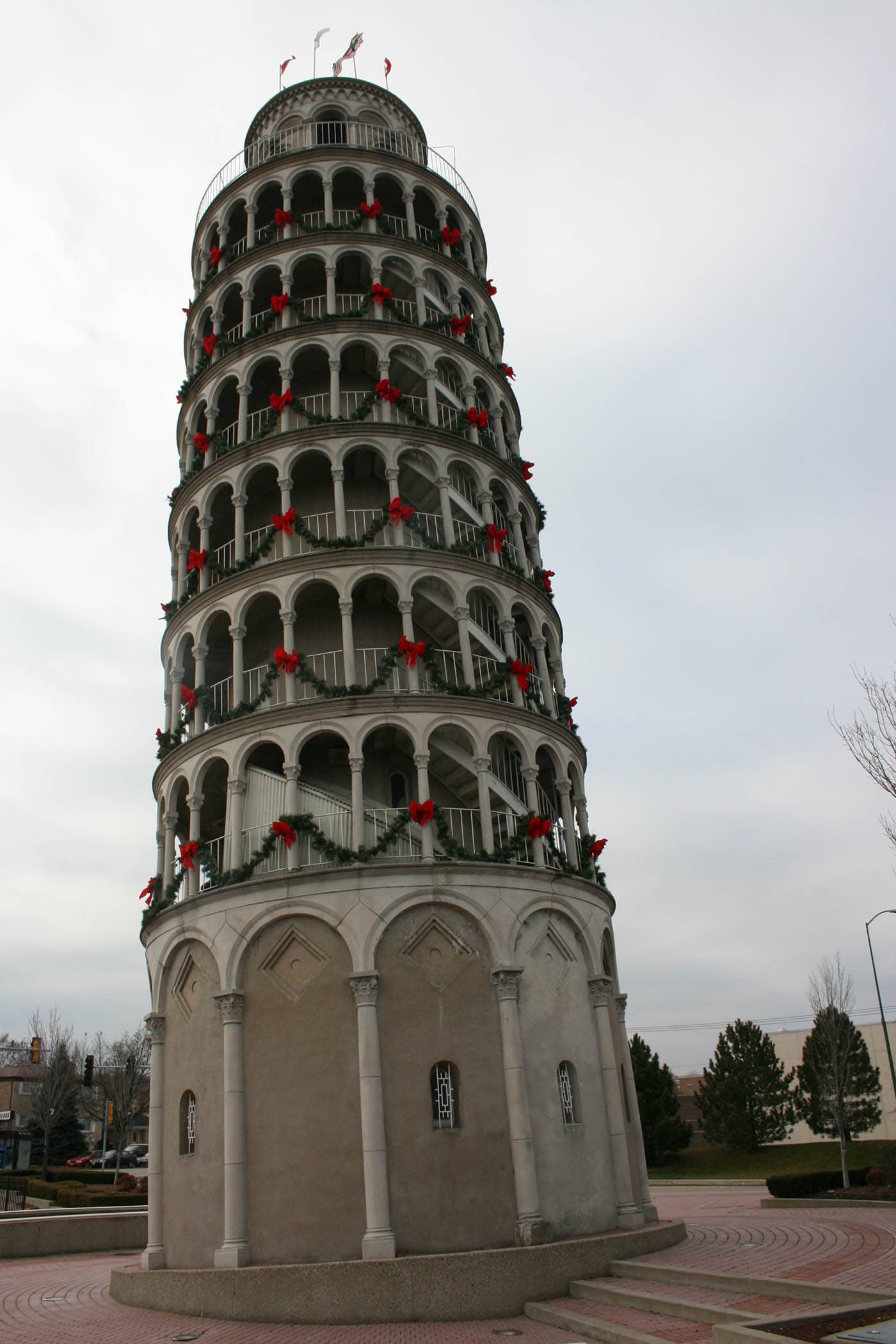 Lincoln on a bench 🙁

This bench unfortunately doesn’t exist. We found the place it was supposed to be but the Mr. Lincoln was not there.

Somehow Abraham was MIA but a random fisherman statue in the overgrown woods does??? Of all the things I didn’t expect to find, this was it. This large fisherman statue was left over from an old mini golf course that used to be on the property and is pretty buried. Now they are building condos around it, so who knows if it will still be there for long…but it looks pretty safe and sound for now! 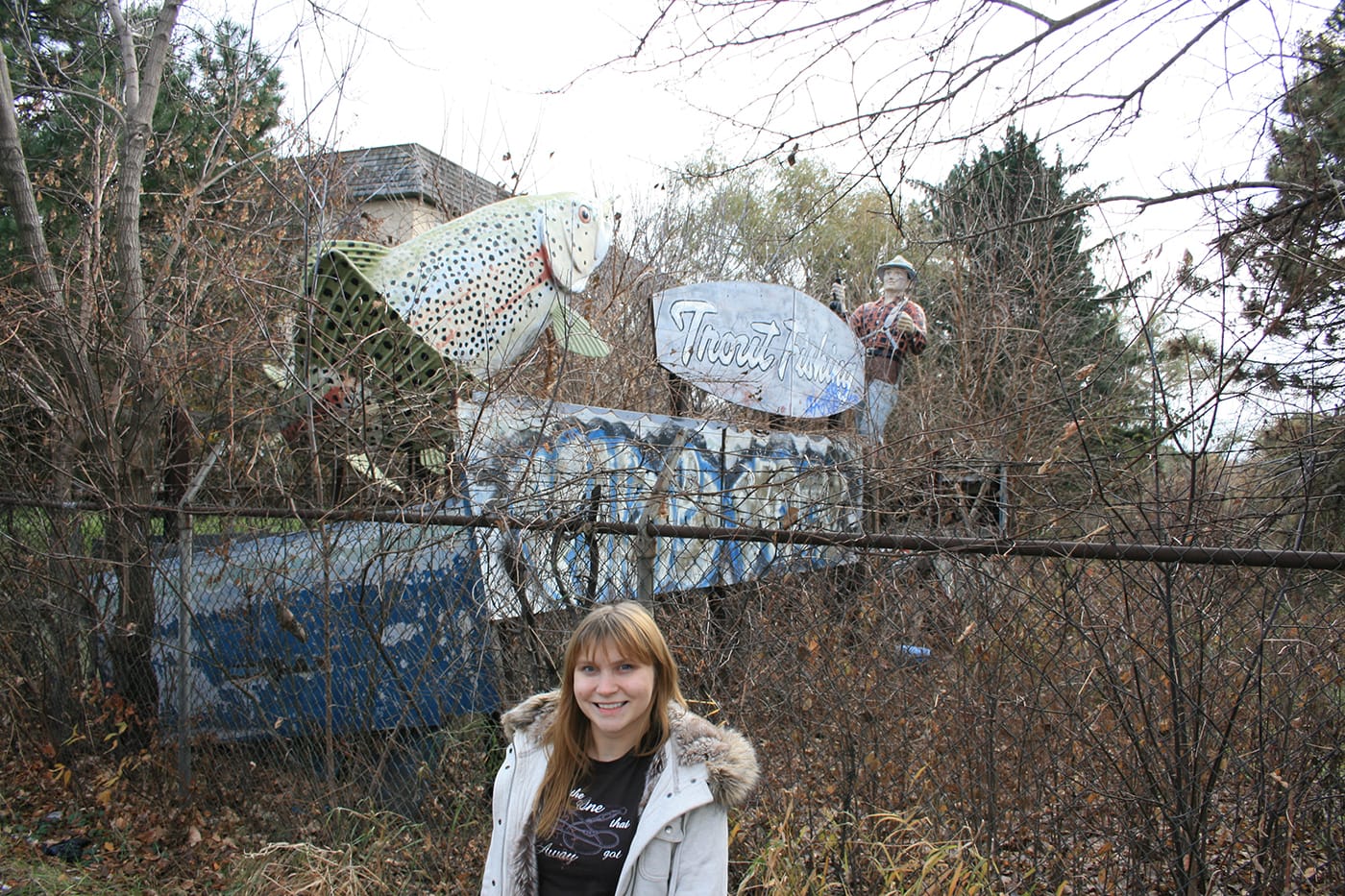 Square Deal Shoe Store in Des Plaines supposedly has a pair of Robert Wadlow’s shoes on display…If you remember the Illinois road trip, you will remember that we saw a Robert Wadlow statue and that he was the world’s tallest man. You know what they say about the feet on a world’s tallest man…The shoe store was closed but they had a giant shoe in the window. This wasn’t Wadlow’s show, that was inside, but it’s a big shoe all the same. 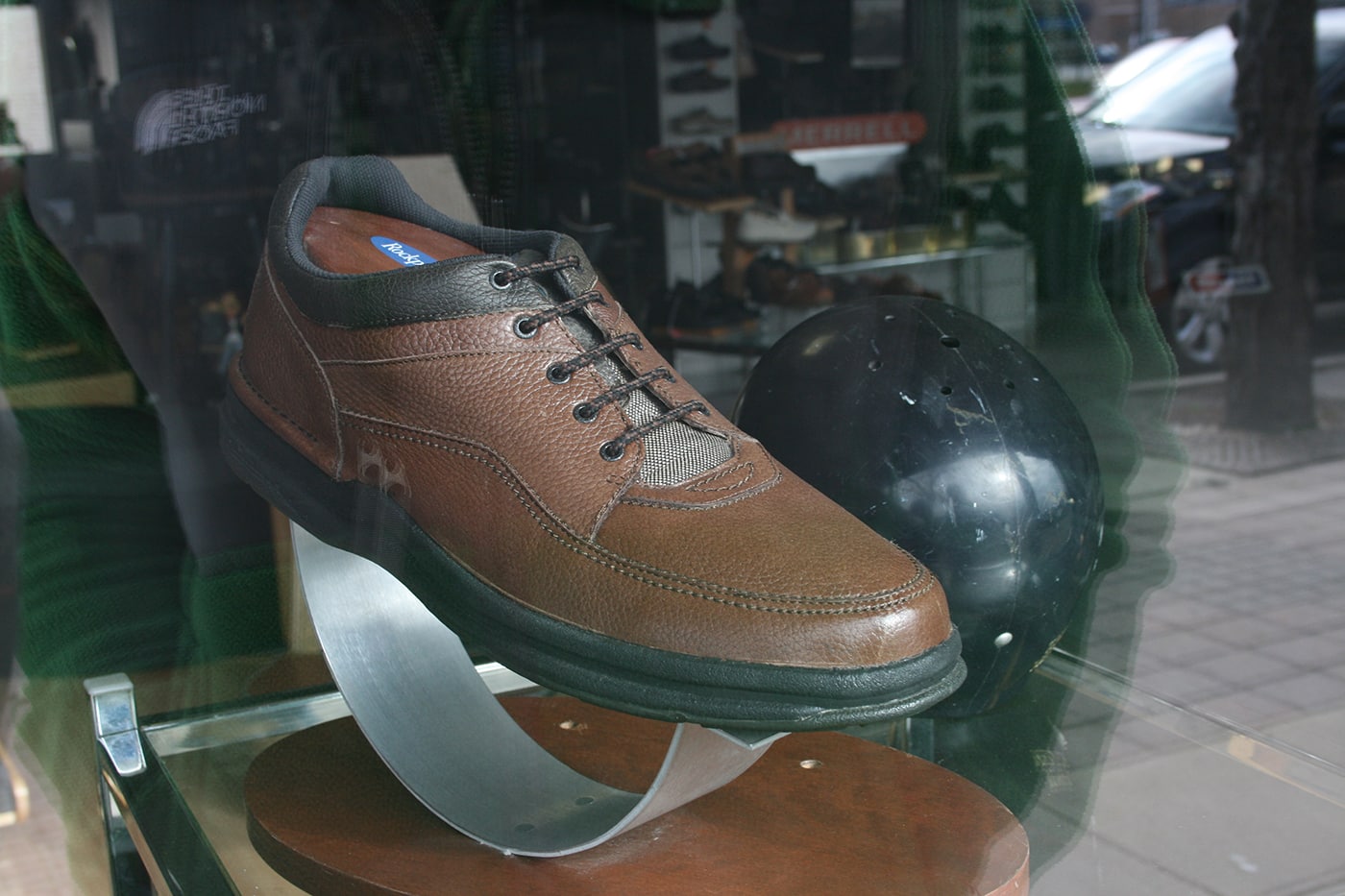 McDonald’s Museum and Store No. 1

Des Plaines is also home to the first McDonald’s franchise! While the restaurant no longer sells food, it’s been restored to its original glory and houses a museum…which, unfortunately, is only open during the summer 🙁 We forwent eating at the working regular ole McDonald’s across the street and instead ate at… 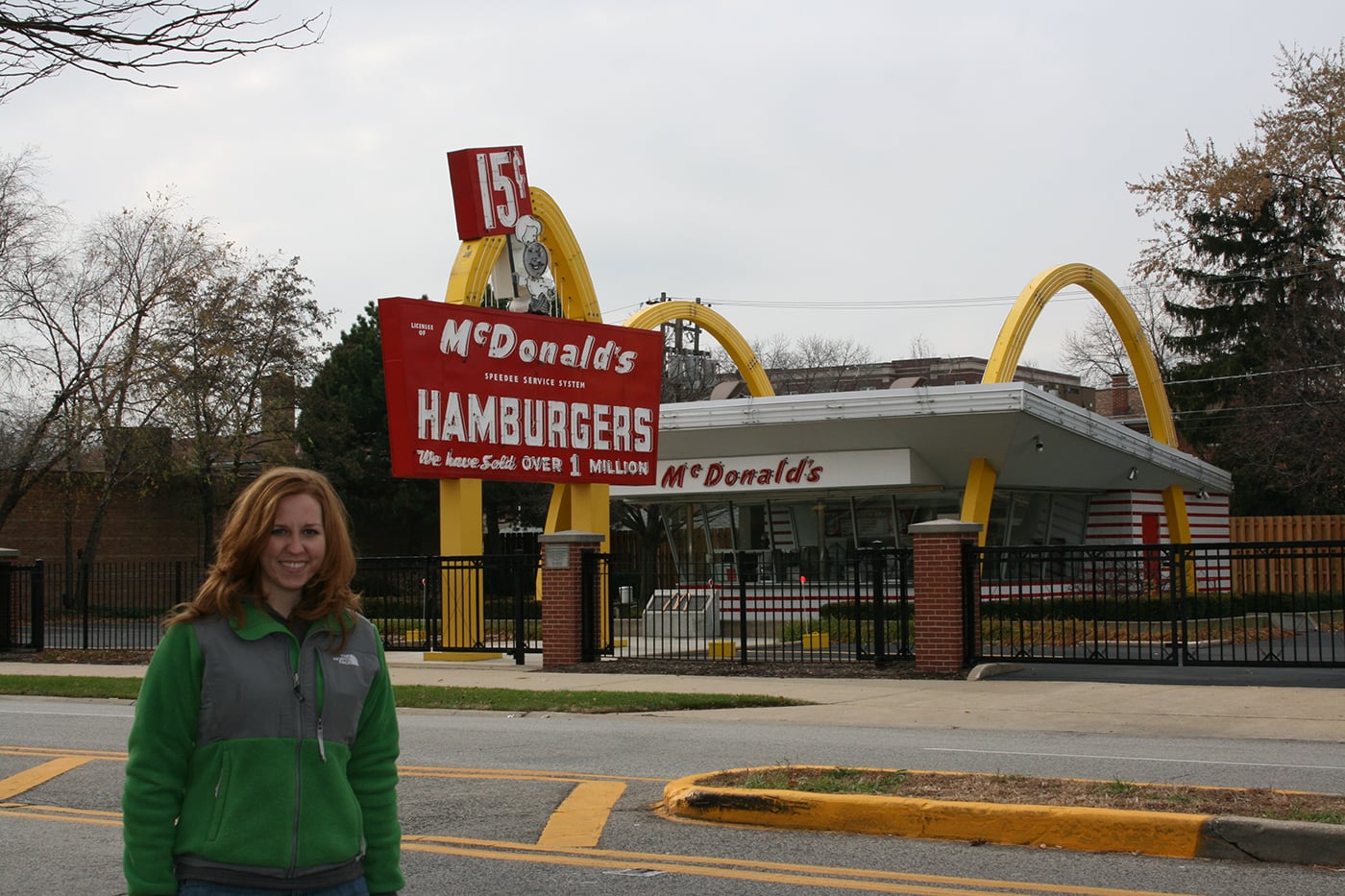 The Choo Choo is a tiny little diner. What makes this stop road trip worthy? Going through the kitchen and all around the counter is a toy choo choo train that delivers your food. How rocking is that? Em and I secured spots right at the counter so we could watch it in action. They had a really yummy chocolate shake and a good cheeseburger. And a train! And I even saw the train almost catch fire once! Awesome. 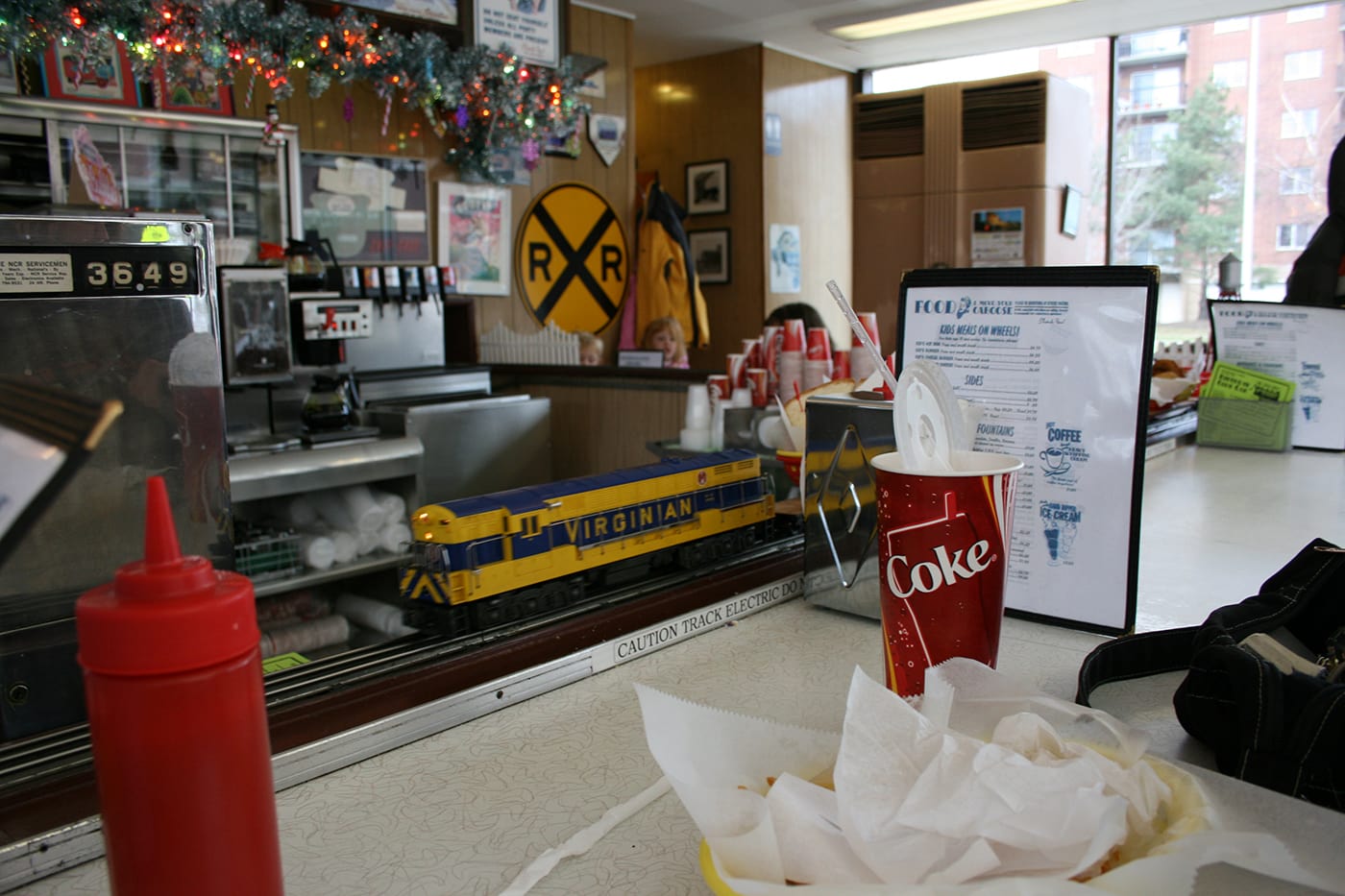 Apparently in Mount Prospect about seven years ago there was a muffler man. Apparently it no longer exists.:-(

Does this garage look familiar? 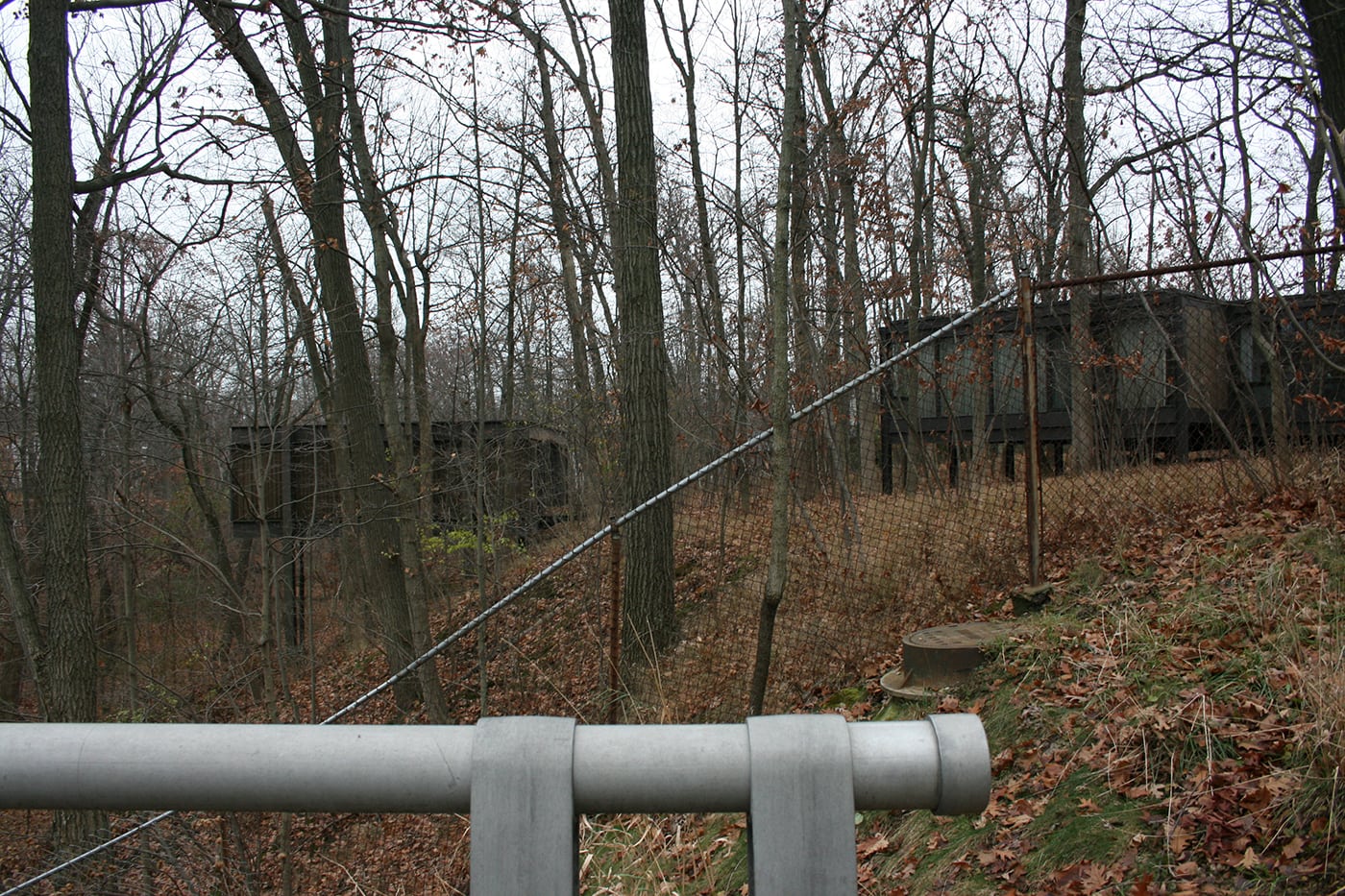 If you have ever seen a small independent art film called “Ferris Bueller’s Day Off” it should. This is the garage where they kept and crashed the fancy car. It is on someone’s house in Highland Park. Because it is November and there are no leaves it made it easy to see. Finally, one point for the chosen day!

Muffler Man and Bessie the Cow

Another muffler man AND a cow statue! This one is at Lamb’s Farm in Libertyville. This is actually outside of the place we buy our devil dogs from. We were a little confused at first because we say the cow, but not the muffler man. Turns out that the cow is even bigger than the man. We didn’t get too close because they were kind of closed. But I’m sure I will return some day. 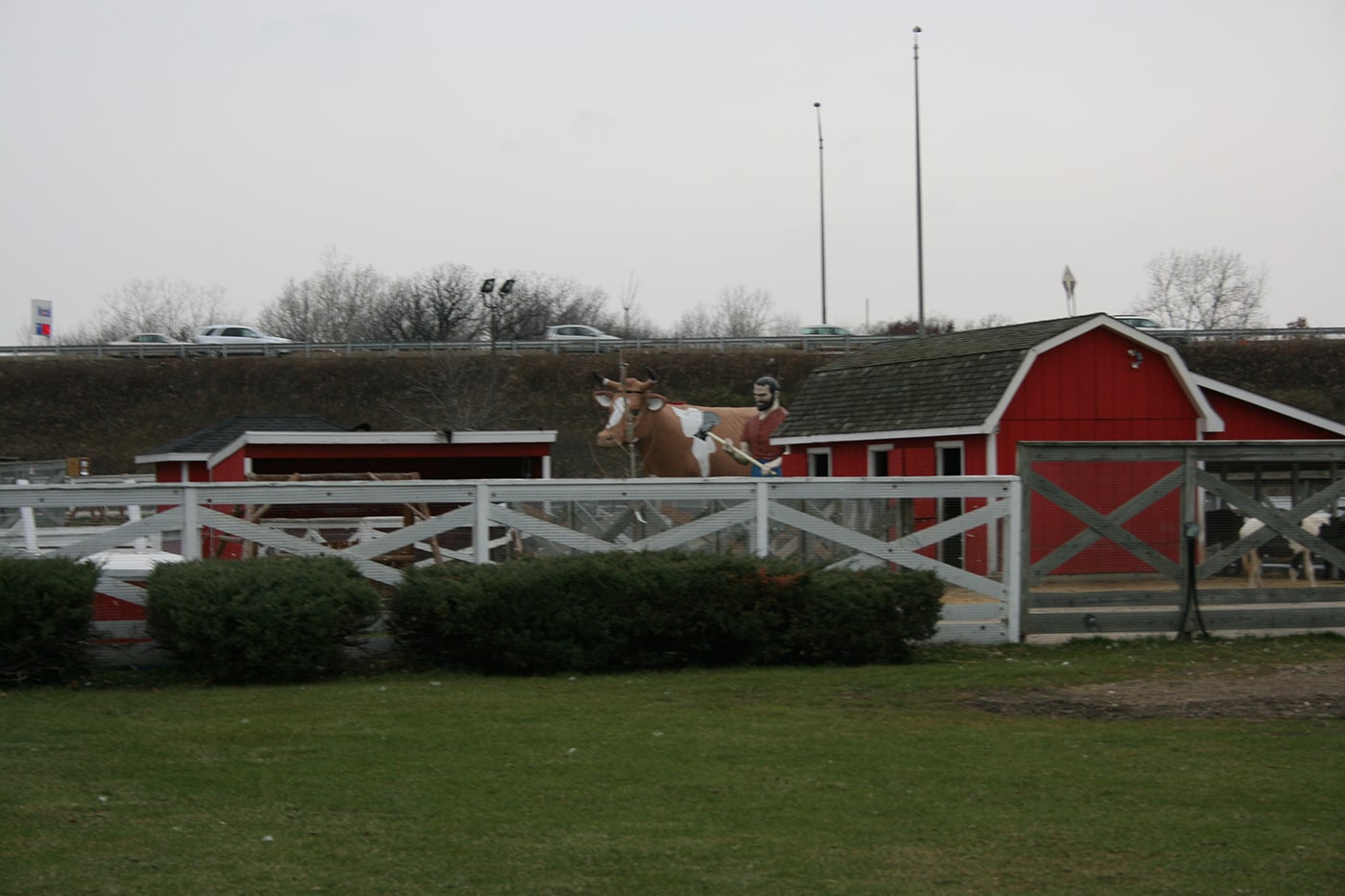 “The largest 24-karat gold-plated object ever created” is the private home of a rich Armenian garage builder and his family. Seriously, this is someone’s house. And right next to it on either side are normal looking houses. The place looks kind of run down and like it is maybe under construction…I don’t know when it was built, but I know it was a while ago. It also started snowing while we were here. Who expects there to be snow when visiting the pyramids? 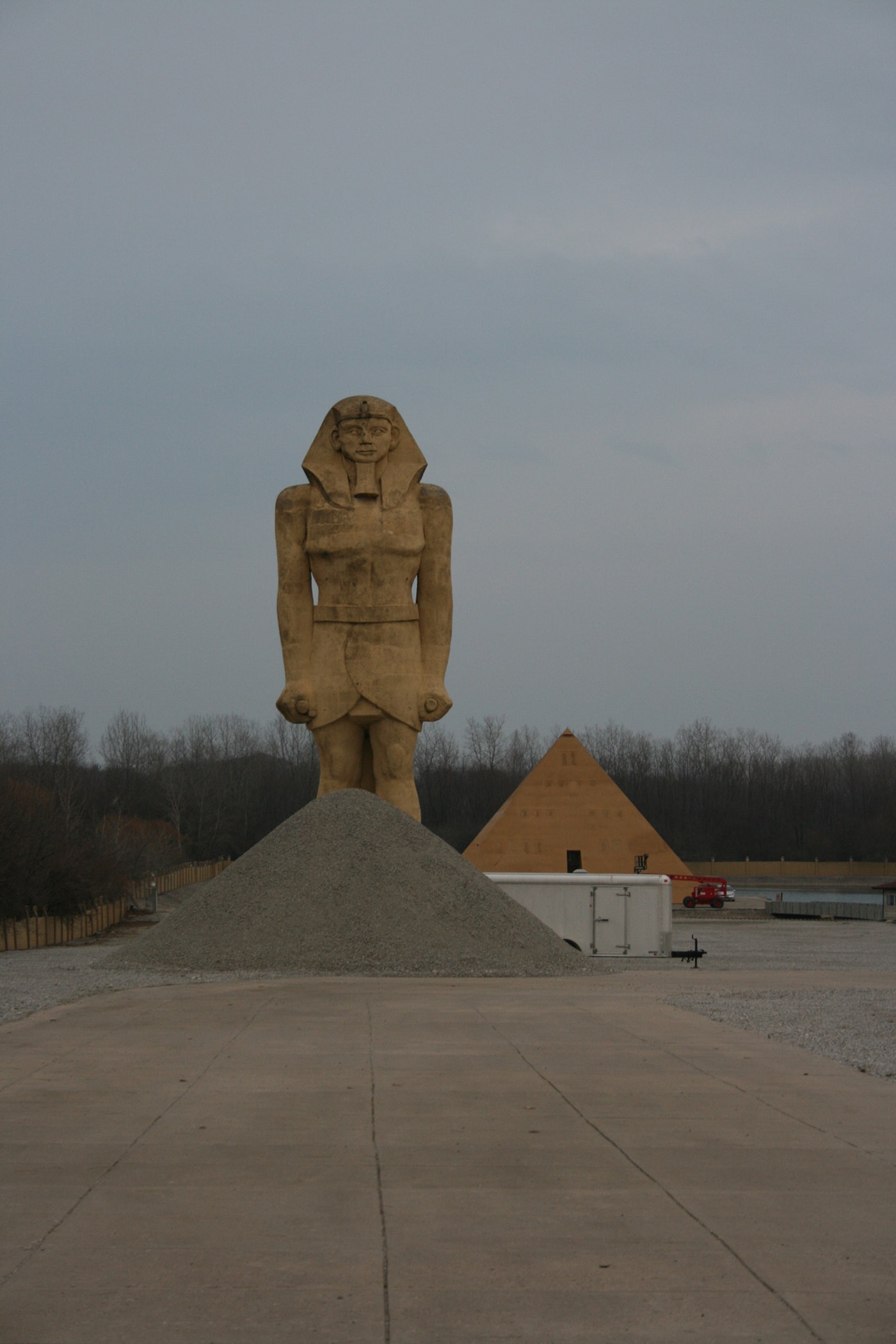 After the Pyramid we hopped on the highway back to pick up MattyK (who had finally finished working…seriously, that boy needs to stop spending all his damn time working and start spending more time with me…I am way more fun and interesting than finances) to join us on our Chicago road trip and see a few more sights closer to the city. We waited as he changed out of his suit then hopped back in the car for more adventure. The next stop was a big ole Cigar Store Indian in Oak Lawn. 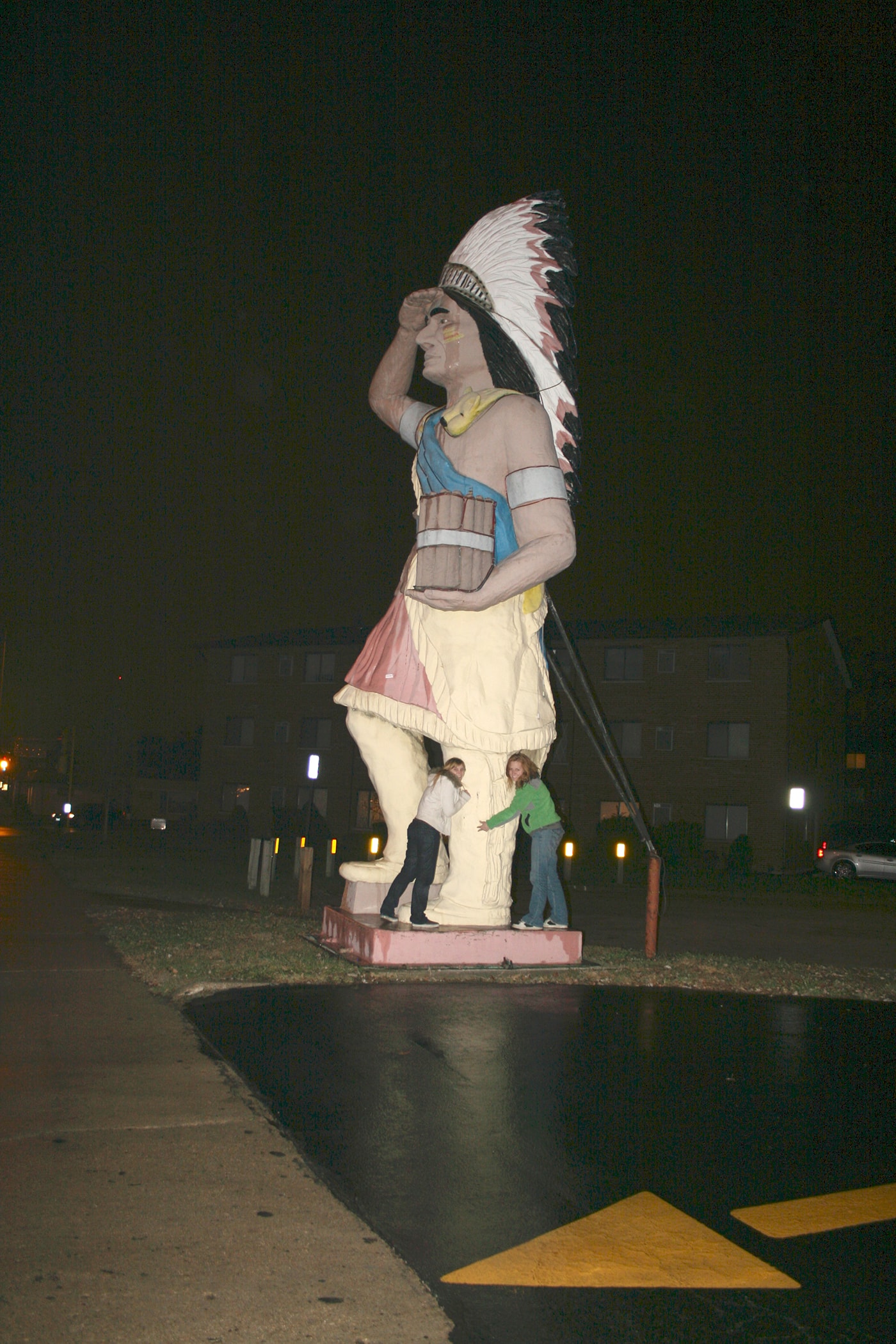 This muffler man in Evergreen Park was very very shiny. That is because he was painted in Du Pont Chroma base auto paint after having a weather-related accident. 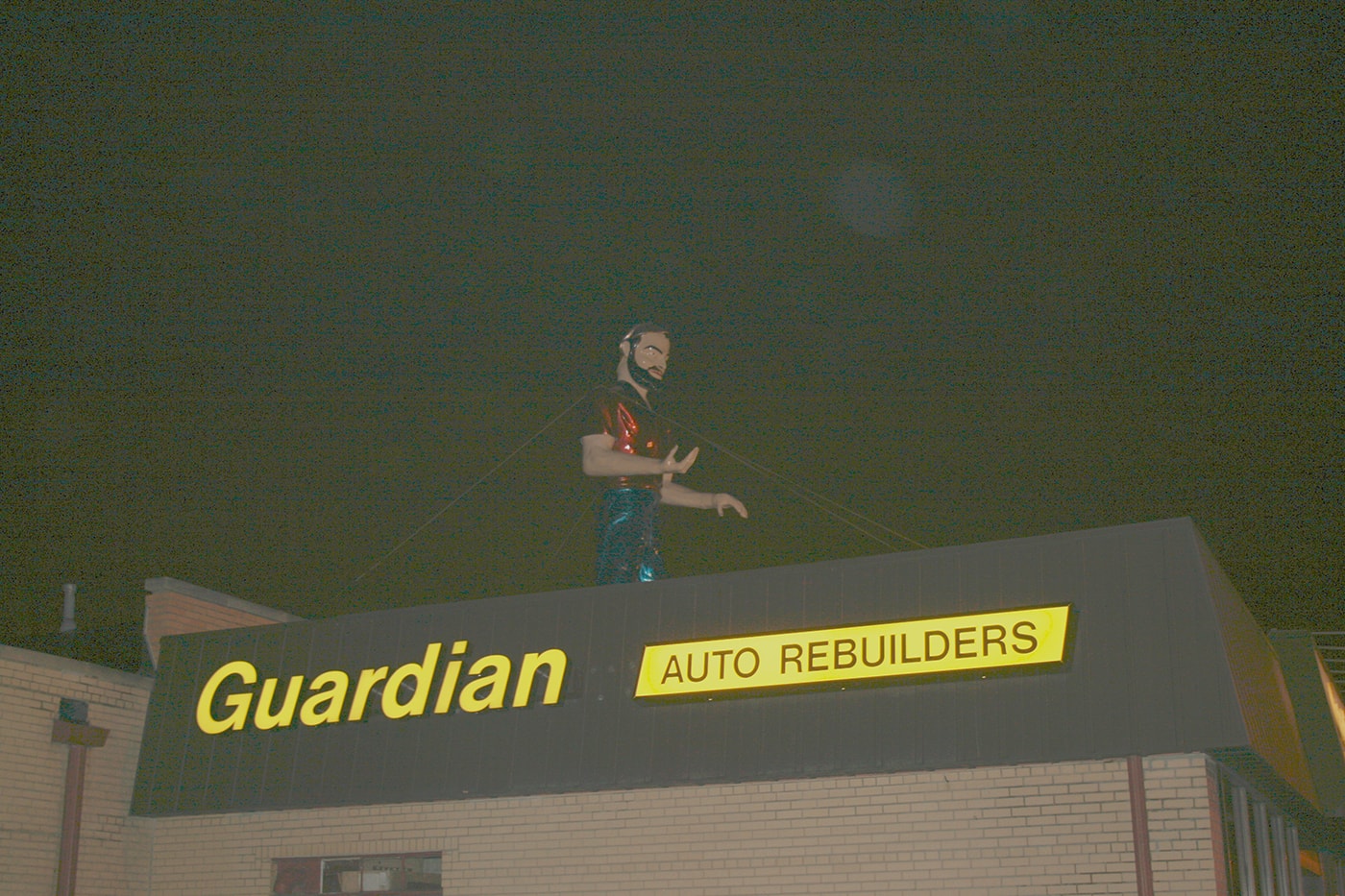 Imagine the scene: you are on the south side of Chicago…in the lane going straight…look up…notice that the Indian you are looking for is on that corner…so you slide into the turn lane…end up turning as it’s going to red…pull over into an unpaid metered space, partially in a tow zone…get out to snap a bunch of pics…and then notice the cop car on the corner who then turns and slows down next to your car…as MK put it “they just gave me a look like I’m the guy forced to hold his girlfriends purse and smiled like they understood.” Hehe. Anyways. So this Indian was creepy. Mostly because he had big white eyes that made him look blind…all while advertising a vision correction center 🙂 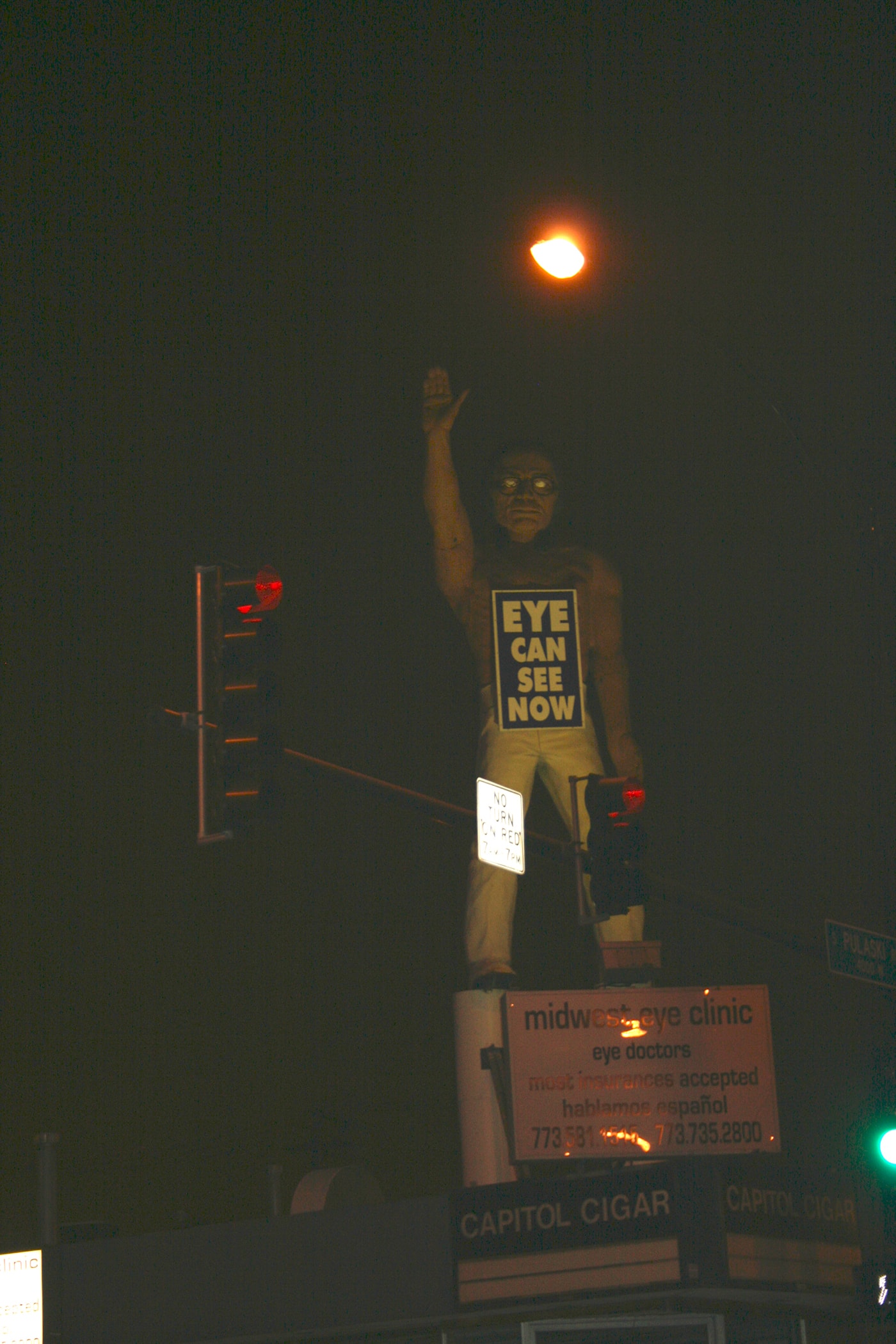 This was just a Kielbasa on a fast food sign. Not too exciting because it is neither freakishly large nor edible. Next. 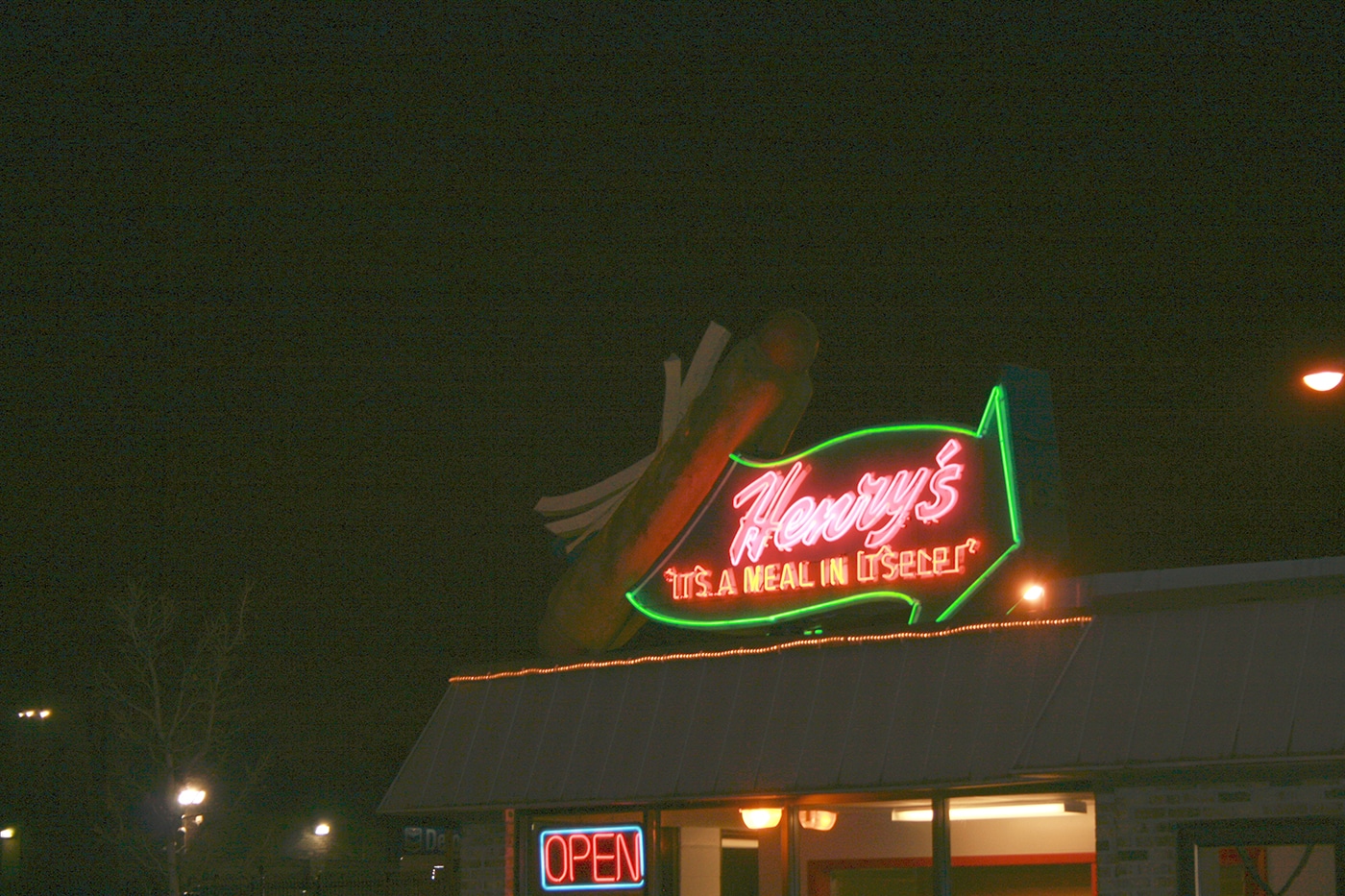 I’ve seen the Spindle a million and a half times but MK has never seen it (how can a guy so obsessed with cars never have seen this Chicago roadside attraction???). Plus they are trying to take it away from me and build a Walgreens which is just blasphemous, so I try to go and pay my respects as often as possible. Plus, no Chicagoland road trip is complete without a stop to see it.

The Spindle is probably better known as “cars on a spike” or the “car-ca-bob”. It’s at Cermak Plaza in Berwyn and had a starring role in the movie Wayne’s World. It also rocks. I will miss the Spindle terribly when it is gone. At least I got to share in someone else experiencing its wonder for the first time (and got him to agree to go back during the day some time…you are going back damnit!). 🙂 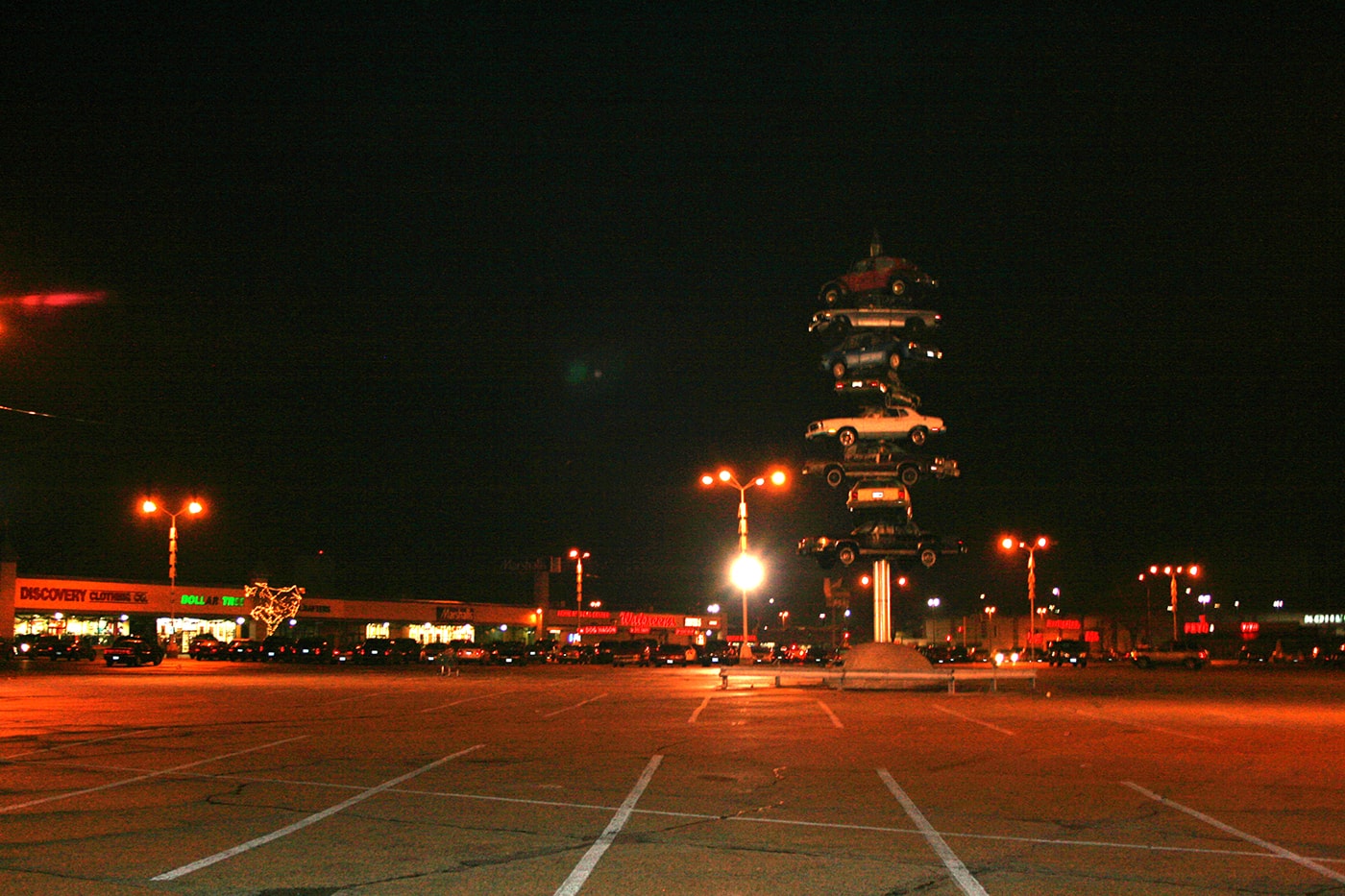 For dinner we headed back to the city for pizza at Piece Pizza. MattyK wanted a boring ole mozzarella, tomato sauce, and sausage pizza…But then the rest of us ate a pizza topped with olive oil, garlic, mozzarella, mashed potatoes, and bacon. Yes, a mashed potato pizza! Brilliant and yummy and I think it was a perfectly fitting food to cap off our wacky road trip around Chicago! 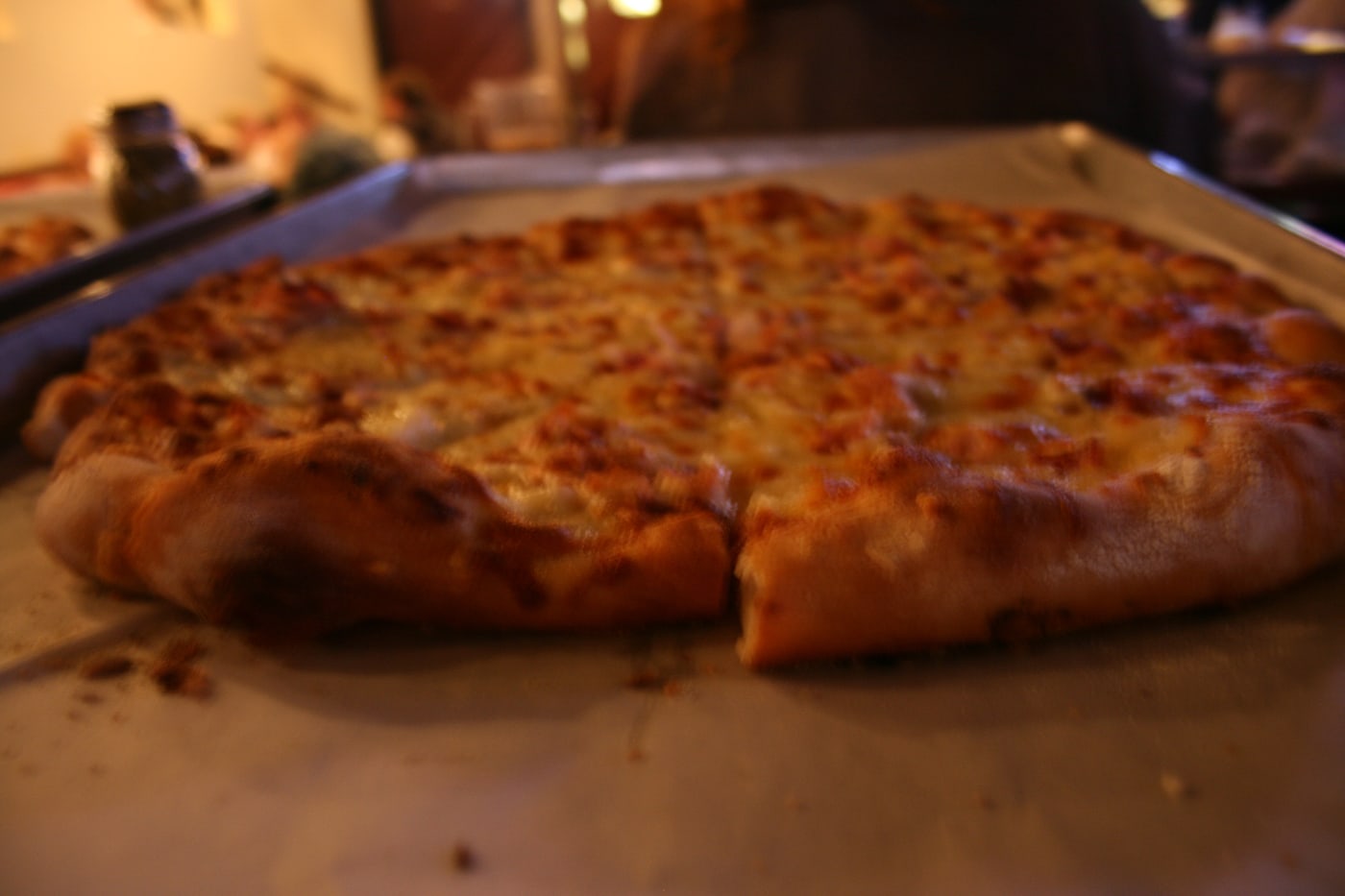 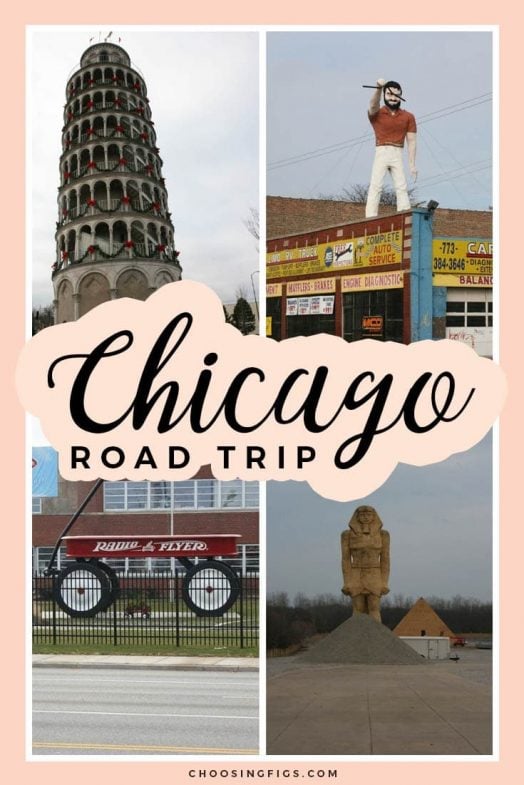 A Road Trip Around Chicago. A Chicago road trip to find all of the Chicago roadside attractions. 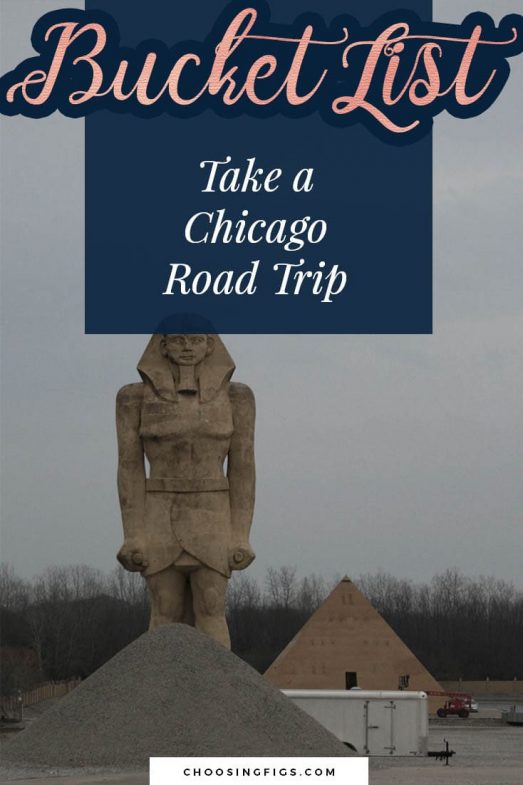 I am your master.

Eveyone flies but me…