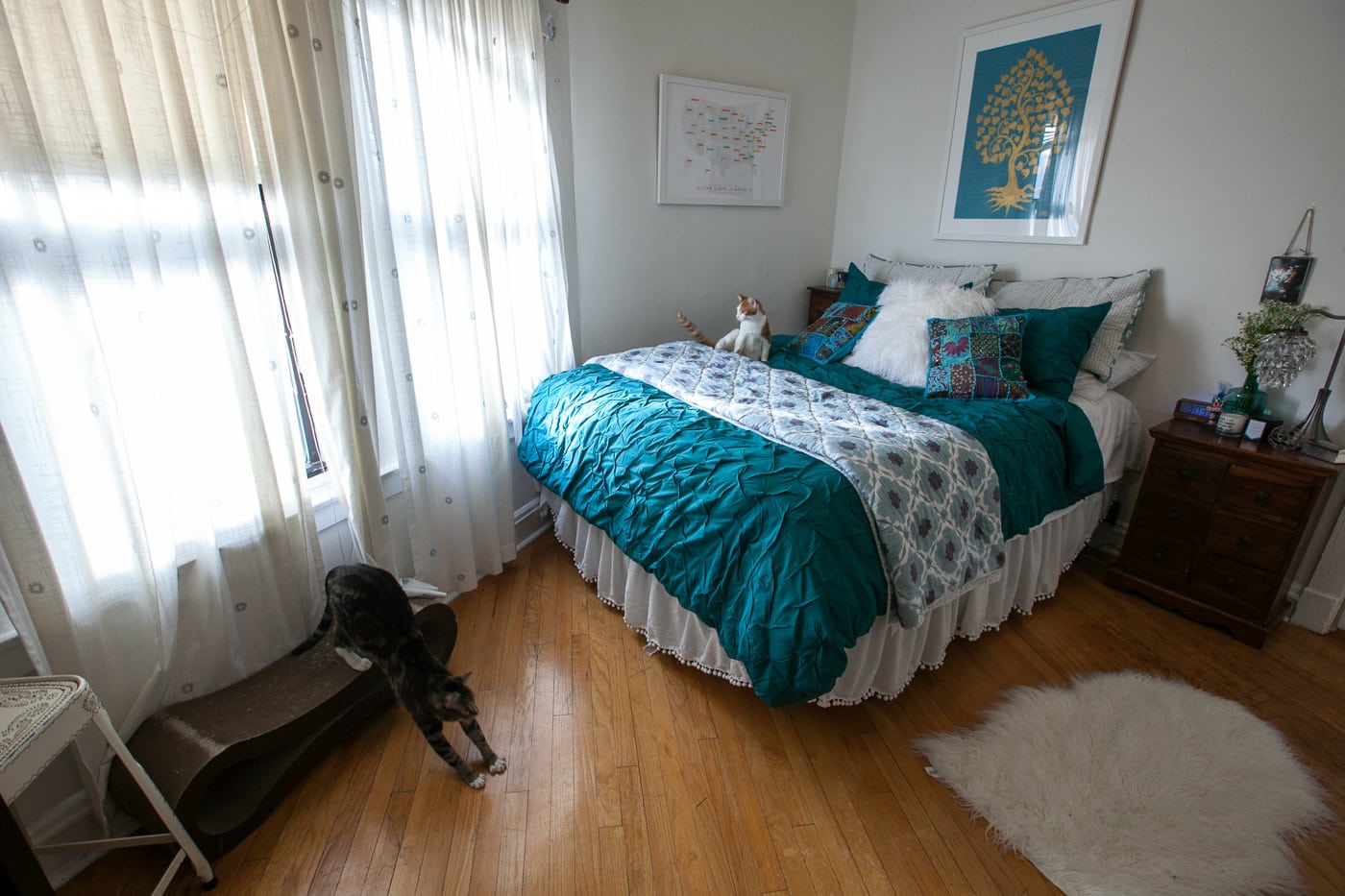 Home » Blog » Apartment » Bedroom » On my demon legs. And my new bedding.

This post contains affiliate links and I will be compensated from purchases made after clicking on my links.

Whenever something is wrong with me, when I’m in pain or not feeling well for one reason or another, I do the best thing I can think to do for a remedy: I turn to Google.

You do it too, I’m sure. Or at least you have at some point in your life. Type your symptoms into a search engine and BAM, instant diagnosis. Of course, nine out of ten times Google tells me that whatever is wrong with me is cancer.

It’s probably not cancer. It’s probably just a cold. Or a stressful day at work. But I don’t think Google actually has a medical degree. He’s trying his best. He’s forgiven.

Sometimes, though, that tenth out of ten times, Google diagnosis you with something else. Usually, for me, it’s anxiety. Go figure. But, sometimes, it’s demons. 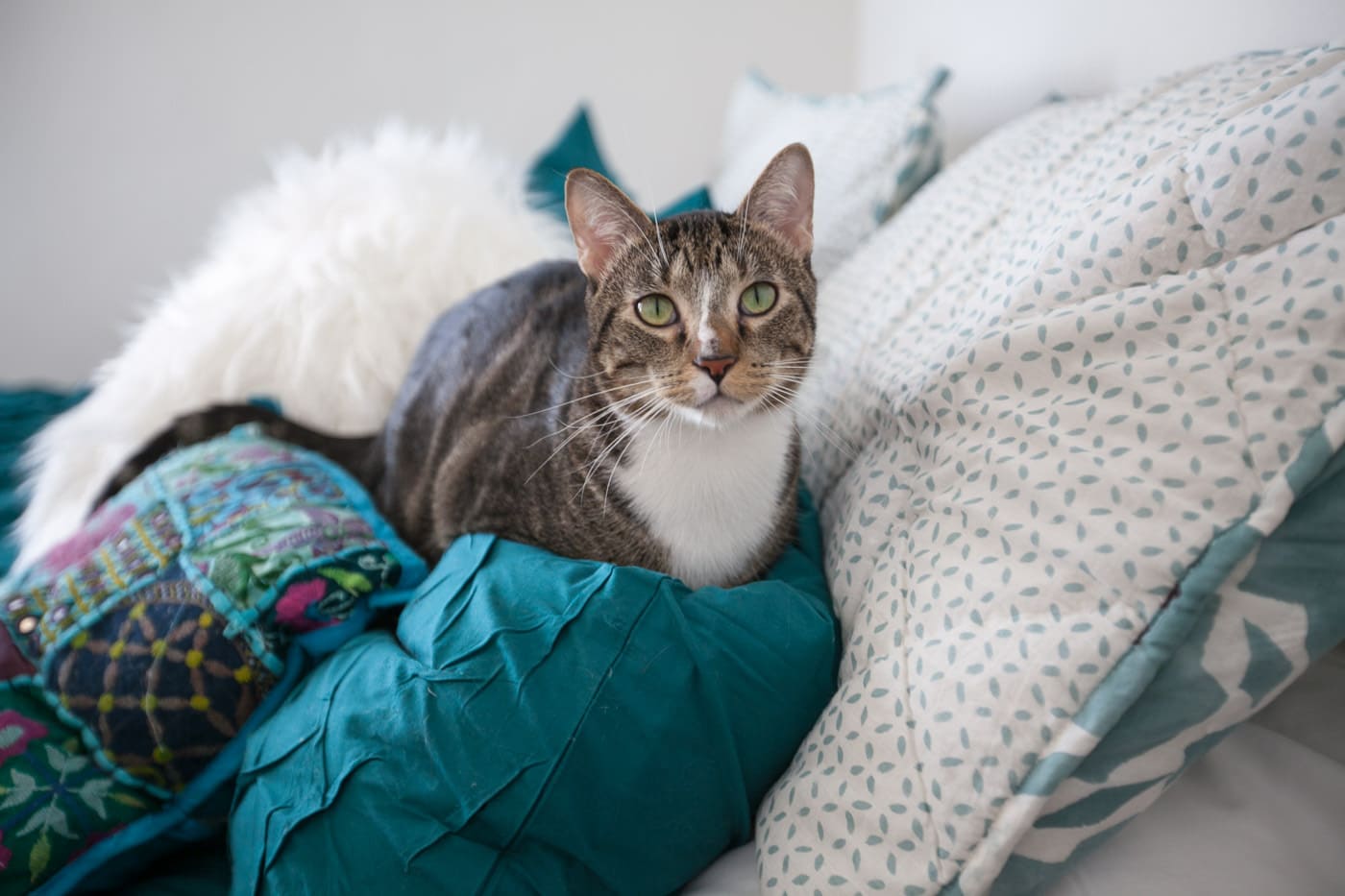 This is a cat. Not a demon. He acts like a demon sometimes though.

You see, I have this problem. I wake up in the morning and find my legs covered in deep red scratches. They just seem to appear out of nowhere and multiply every night.

So, obviously, I Googled, “wake up with scratches all over my legs.” And Google told me, on multiple sources, on result after result, that it was, most likely, a demon problem.

Now, before you say, “Val, you have cats, it’s probably the cats, especially since you still have no idea how to cut their nails and their claws are sharp and scratchy.” And I’m going to stop you. Because this was happening well before I got cats. Every morning, a tic tac toe board of cuts would appear on my legs and the demons were winning.

So I read article after article and forum after forum from other innocent victims to the leg-scratching demons seeing if there was anything I could do to rid them from my life. But the only things that were certain from the articles, every one of them, was that it was definitely demons causing this and it was definitely not the victim doing it to his or herself. Because the victim, almost always, bit their nails. And how can you scratch yourself up so badly if you don’t have any nails? It’s impossible.

Of course, I bite my nails too. It’s a terrible habit that I’m sometimes able to curb for a few months at a time but, usually, my fingernails are nonexistent. Actually, that’s not true. I have little stubs of nails with sharp jagged edges. The kind of nails that, true, won’t satisfy an itch. But, probably, will leave a mark…

So, maybe I should invest in a manicure and not an exorcism…?

But I still probably won’t go investigating what the cats are staring at.

I was kind of desperate for a replacement but waffled back and forth between what I wanted. I originally wanted to find an aqua-colored boho print duvet. But everything I found was either way too expensive or too college dorm room.

Then I thought about going all white. Because nothing says comfortable, relaxing bedroom like a mountain of all-white sheets. But all white sheets are probably a terrible choice for someone who is going to bleed all over the bed. Just sayin.

I briefly considered pink velvet. So on trend. So pretty. So dry clean only. Next. 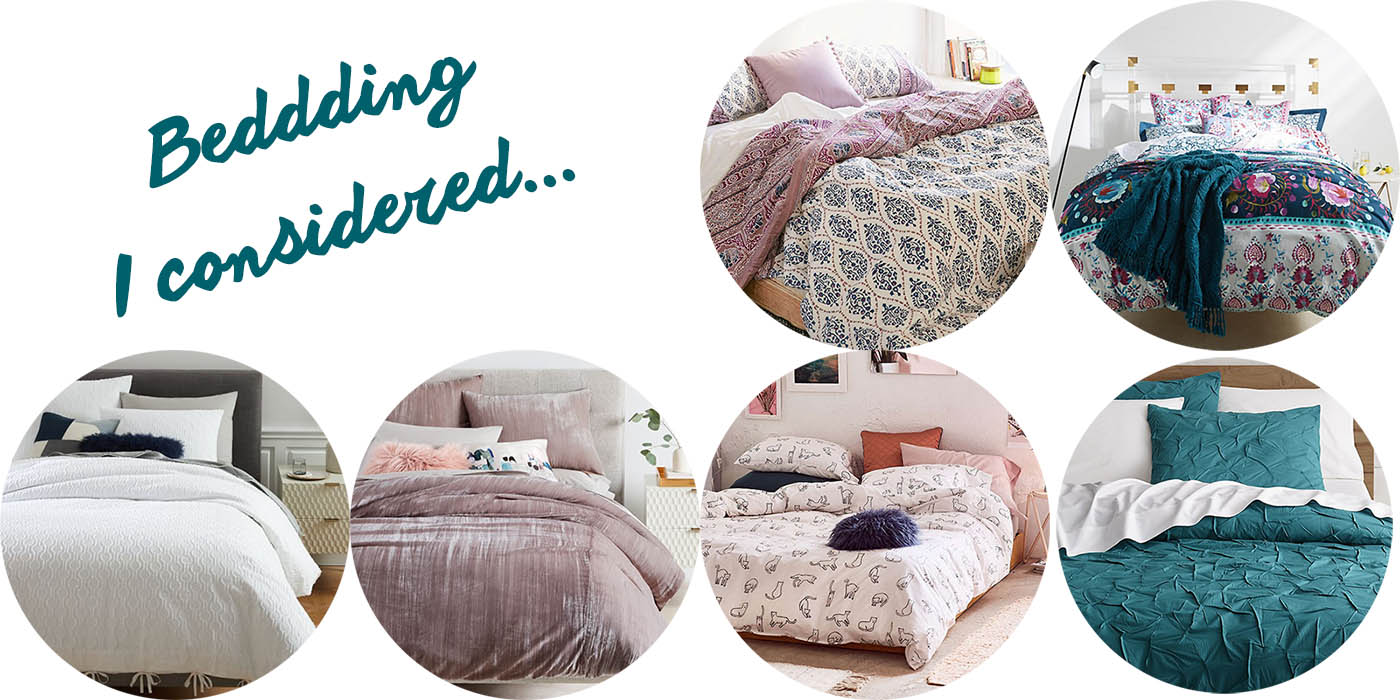 Finally, in a last minute switch on Black Friday, I went for a textured all-teal duvet from CB2. It fit my color scheme. It went with my existing quilt and the pillows I picked up in India. It was dark enough to maybe hide all the blood…? Maybe.

Or, maybe, I should just get a manicure, try to kick my bad habit, and try not to bleed all over my new sheets?

Or maybe I should just hire that exorcist. 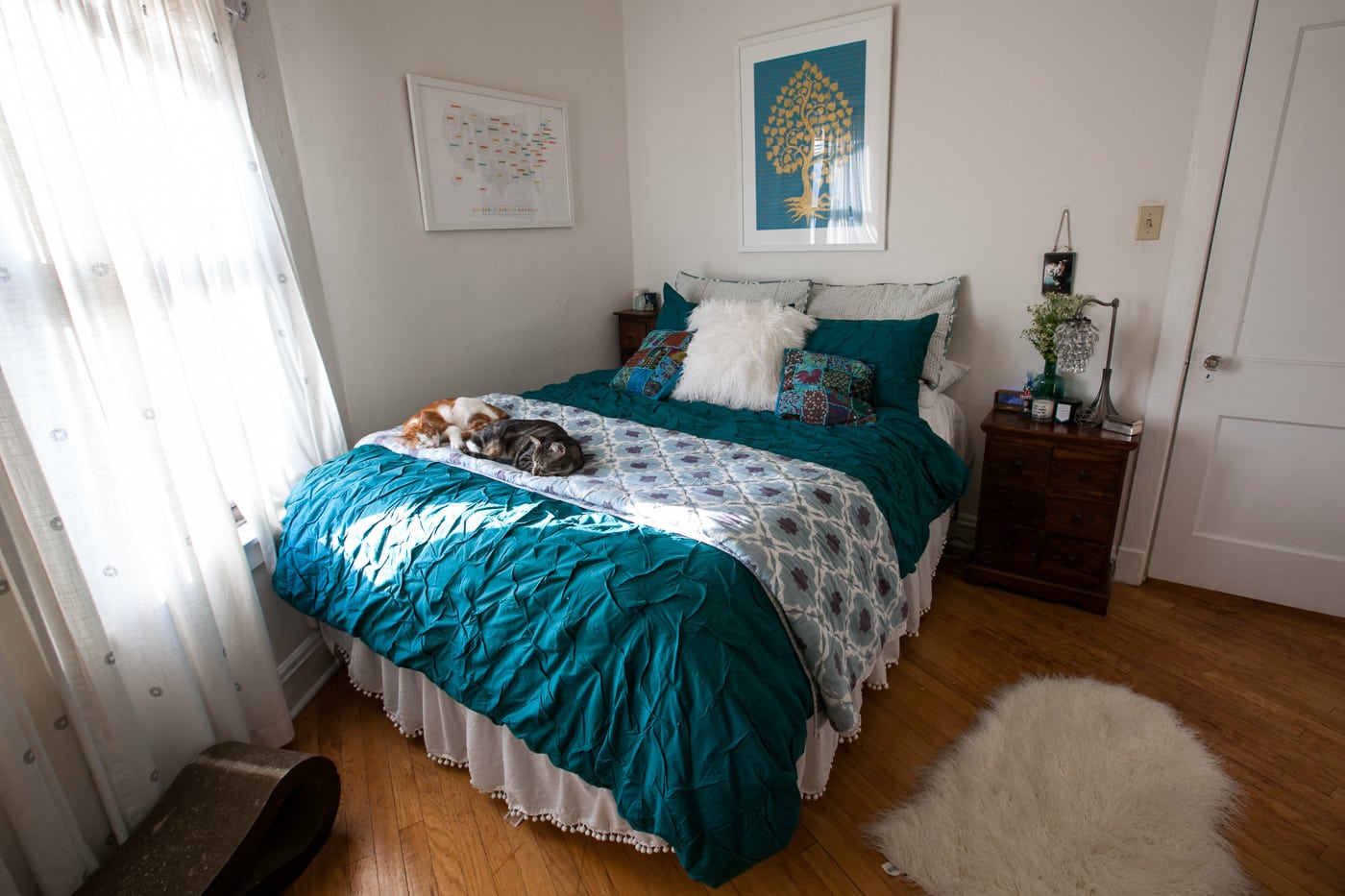 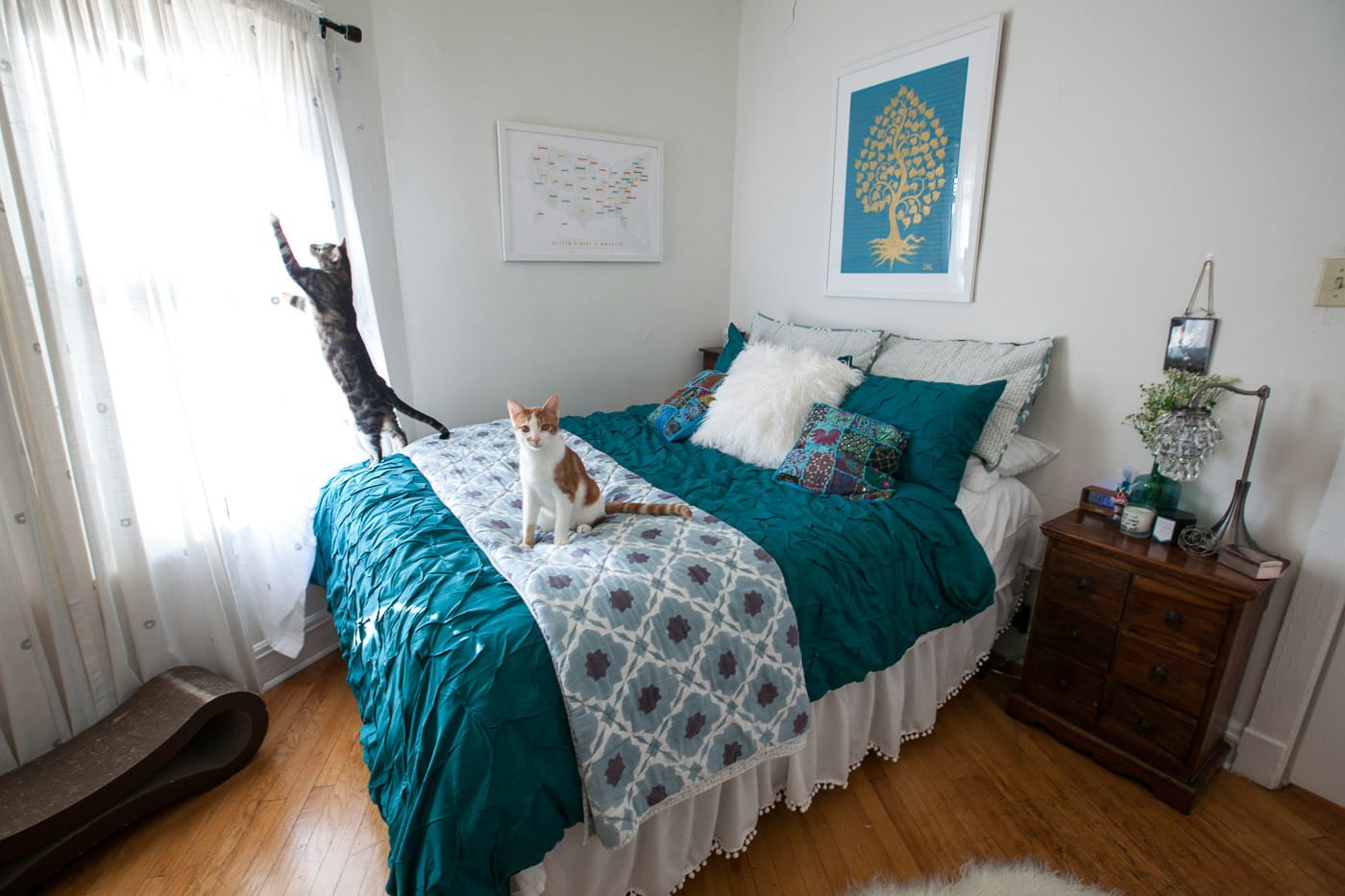 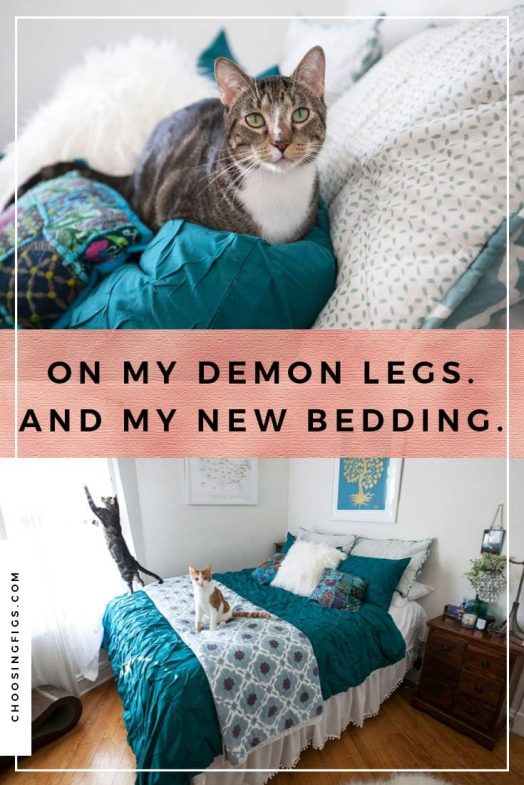 On my demon legs. And my new bedding. My new bedding: Melyssa teal duvet cover from CB2. Plus cats. Obviously. 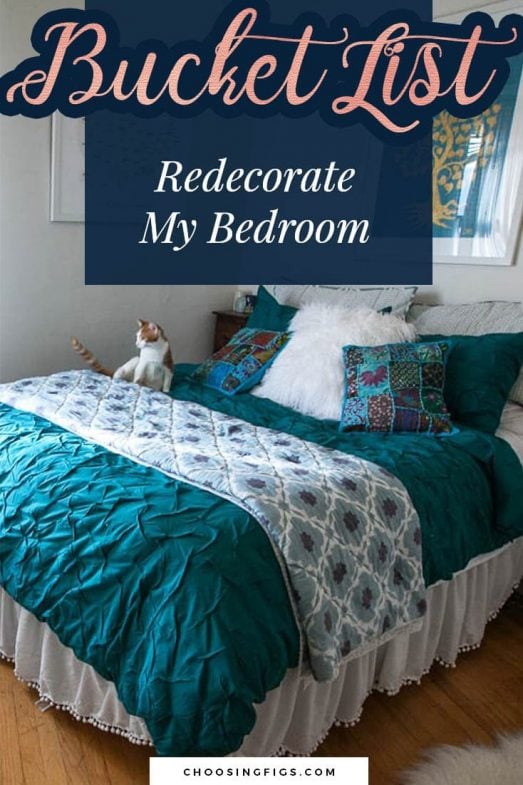 Bucket List Idea: Redecorate my bedroom. | On my demon legs. And my new bedding. My new bedding: Melyssa teal duvet cover from CB2. Plus cats. Obviously.

in Apartment, Bedroom
by Val Bromann

The year I didn’t blog.