On love and travel.

Truth is, I’ve been single for a long time: I broke up with my last actual boyfriend in 2003. No, I didn’t misplace a one there. I said 2003. He’s now married and lives in the suburbs with a kid and I’m totally happy for him and all that crap.

And yes, if you’ve been reading for a while, I have had my share of “relationships.” But those have been mostly men I’ve met while traveling, temporary things, the longest being two weeks and the shortest probably a few hours. They weren’t boyfriends, they weren’t actual relationship relationships. They were just flings, I suppose.

But no, I haven’t had a boyfriend since college. And college was a long time ago. And, no I have no idea how one even changes their relationship status on Facebook.

Sometimes I doubt I’ll ever find someone I can stand enough to be in a relationship with again. Or who can stand me enough. And sometimes I think I’m totally OK with that. Of course, I just burst out crying when I wrote that sentence, so I’m probably totally not OK with that.

But I also, sometimes, wonder if I’m ever even possibly going to find someone who wants the same things I want. I mean, I want to travel, and not just travel but travel long term, for long stretches of time, semi-permanently. But I also want a home, a home that I get to decorate however I see fit. And I wonder what would happen if I fell in love with someone who doesn’t want the same thing. Who doesn’t want to travel long term. Or who wants kids. Or who has some sports memorabilia collection that he’d want to display above my perfect teal couch.

What do you do if that happens?

And I think sometimes I think too much and assume that I’m never going to find that right person, that man who wants to live in a teal and pink apartment and travel and never have children and lead an awesome life and who is totally cute with a totally cute beard but with no input whatsoever into how an apartment should be decorated and is totally fine giving up free rein to me. So I hold myself back.

And sometimes I think that I will find that man. Or, at least, a version of that man. But won’t feel ready. But will always wonder who else is out there. That I will never really feel satisfied. So, I hold myself back.

Sometimes I’m really happy that I’m still single at 35. The more divorces I see the more I joke that I just skipped my first marriage. And if I look back on men I was involved with I know that if I had gotten married to any of those men in my early twenties I would be divorced or miserable by now. And if I had gotten married in my early twenties I never would have quit my job to travel, I never would be as independent as I am now. And so I’m thankful I’ve had all that time to myself to get to know me, to become the version of myself that I am today. Because this me is pretty amazing.

And, besides, I totally saved money because the older I get the simpler my idea of a wedding gets. What used to be princess ball gowns and live bands in my head now is more of an elopement under a tree in Central Park. (Obviously shot by the best elopement photographer in New York.) Of course, getting free appliances would have been nice.

And, of course, getting a date would be nice too.

Since I’ve been totally boring on the dating/sex/#BadDecisions front lately, let’s step back to a time when I was traveling, when I was totally carefree and didn’t think about men in terms of whether they were right for me in the long term or didn’t have any expectations. When I let things happen. Here are some of my favorite relationship stories from my travels.

The first debaucherous night of my trip when I decided I couldn’t hook up with someone ten years younger than me. Of course, later I broke that rule…

Because, you know, everyone should make out with a stranger in the middle of a tomato fight…

Still the hottest guy I’ve ever met. I sometimes wonder where he is now…

Sometimes you’re just not that into him.

The biggest question mark in my travels: what would have happened if I went back?

He was ten years younger than me, and I knew if would never work.

I didn’t expect to fall for a guy in Pai,Thailand. In fact, I promised myself I wouldn’t…

On (not falling in) love at first sight. (or, why does everyone hate on Bogota?)

Sometimes it’s not love at first sight for the man, or the city. 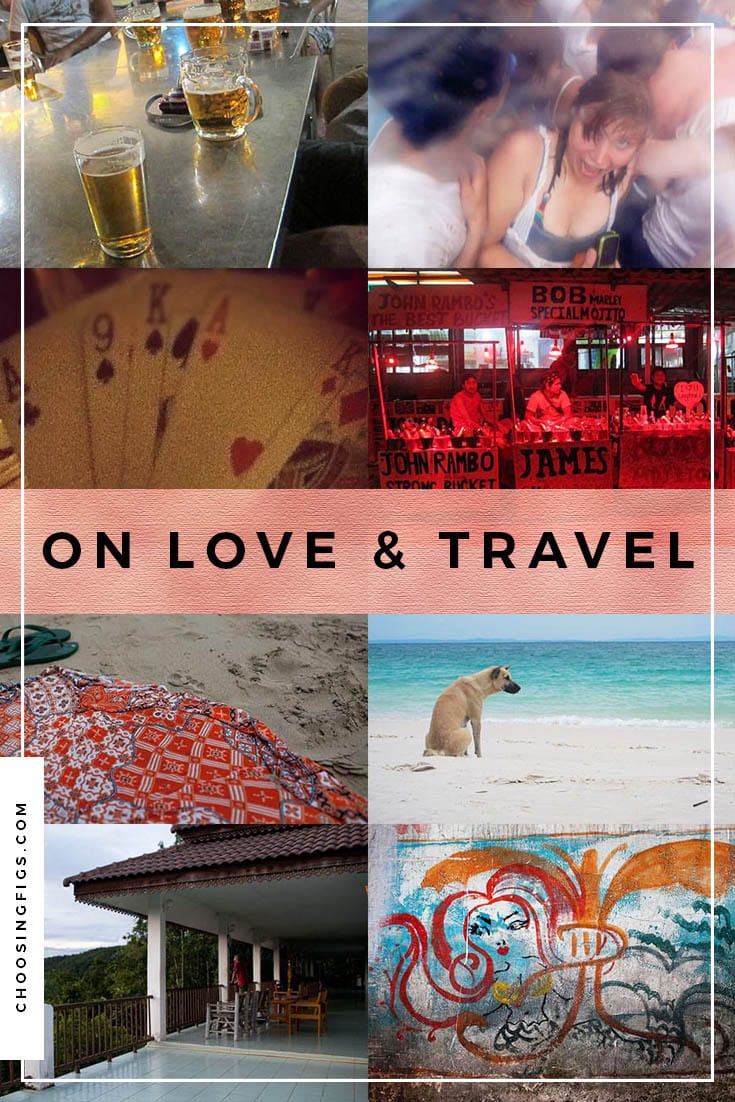 in relationships, travel
by Val Bromann

My dining room and my buy-once philosophy.

Next post
My dining room and my buy-once philosophy.