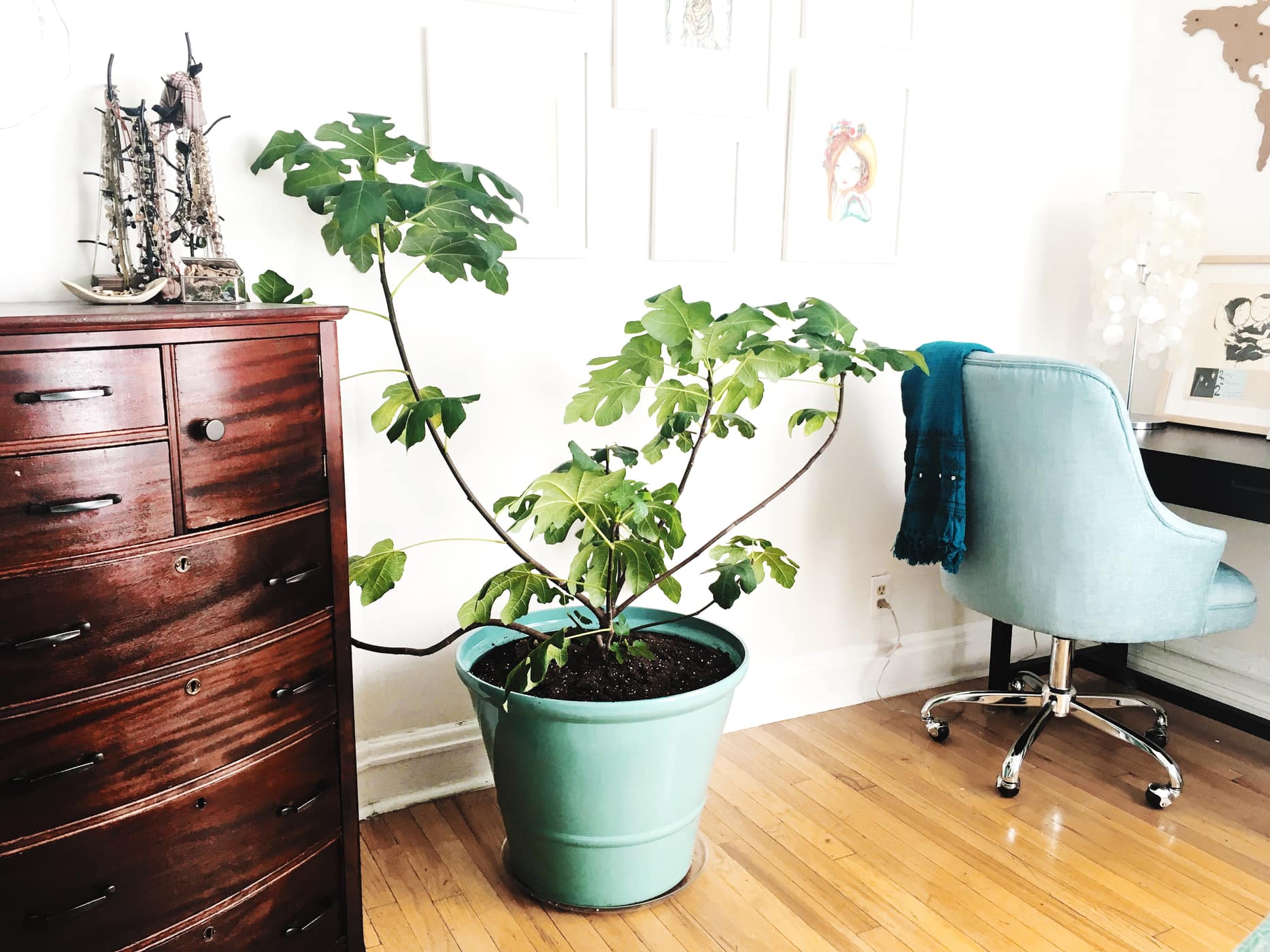 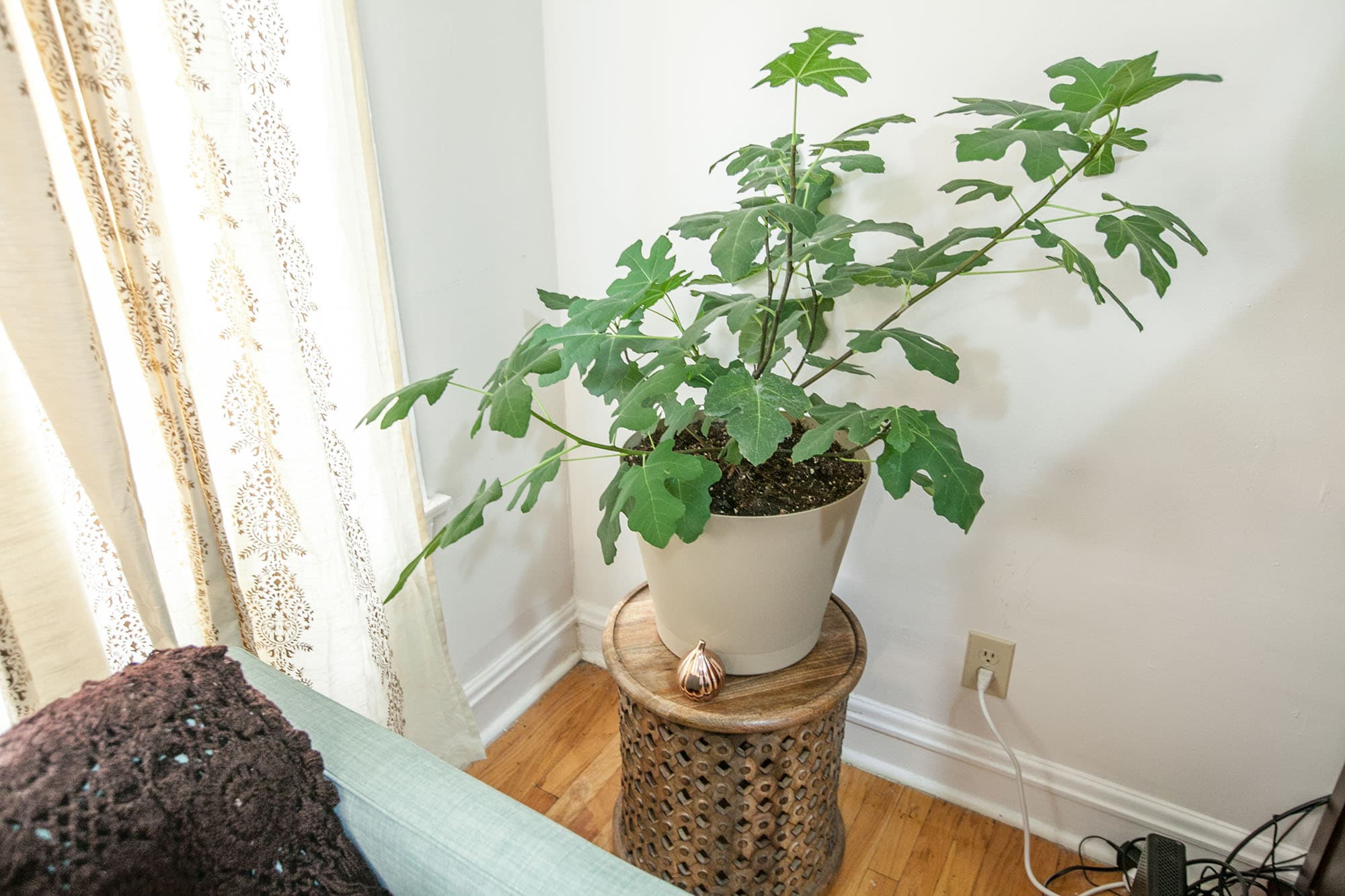 My Chicago Hardy Fig Tree soon after I bought it from a farmers market.

I loved my fig tree and I was obsessed with having a fig tree and, because of that, I kept it alive. For someone whose thumb is as black as mine, that was an accomplishment. I kept it alive for 6 months, 12 months, 24 months. It even produced fruit. A tiny crop of tiny fruit that prematurely fell from the branches. But fruit. Actual, edible, sweet, delicious, fruit.

I watered the tree regularly, pruned back its browning leaves, and repotted it when it looked like it needed a new home.

Because that tree grew.

The tree quickly grew out of the pot it came in so I bought a new one. I replanted it then and then, earlier this year, replanted it again in a pot big enough for it to grow into.

The tree now took over half my bedroom but I didn’t care. I loved having my very own fig tree. 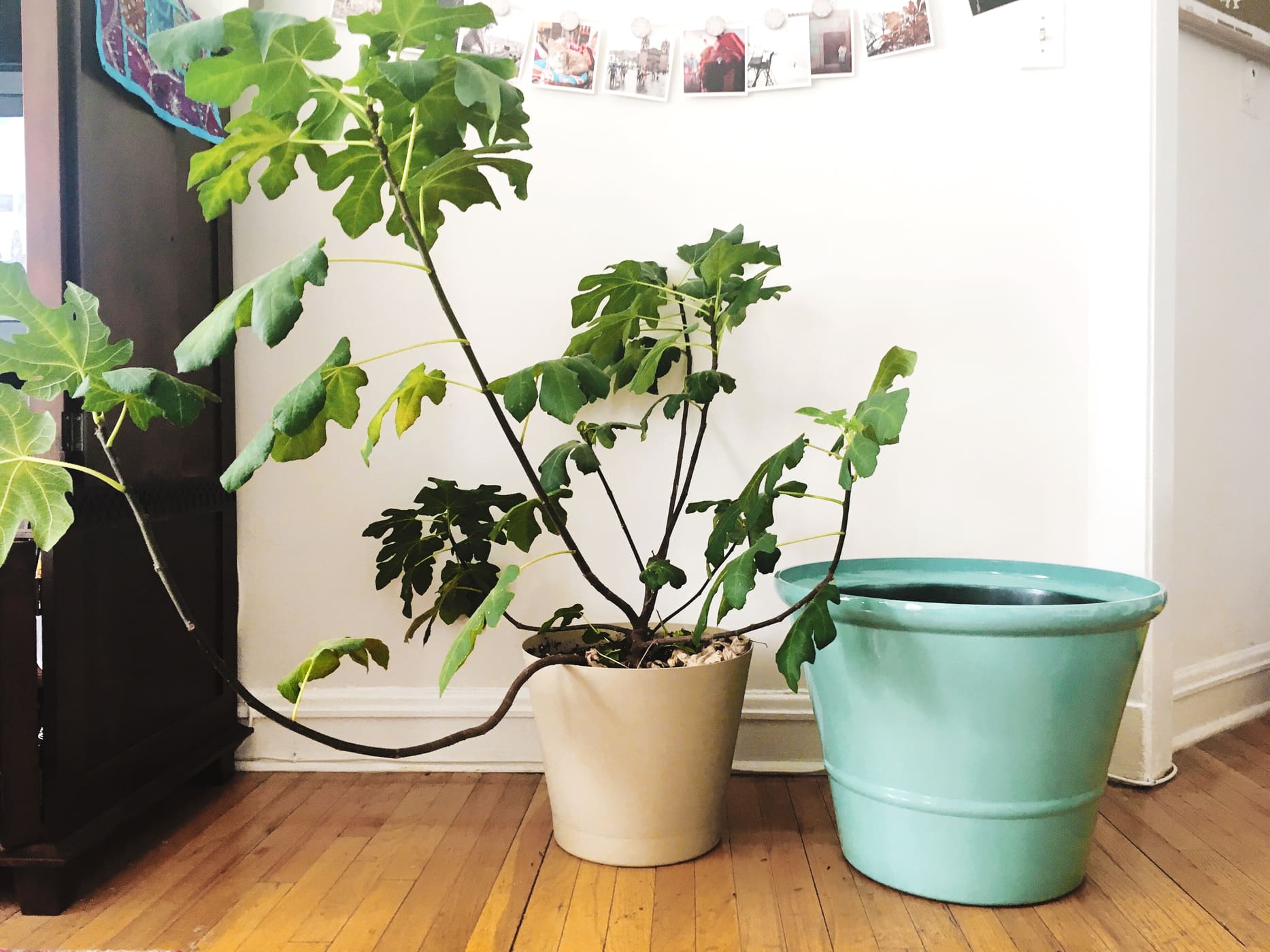 And then, I got cats. 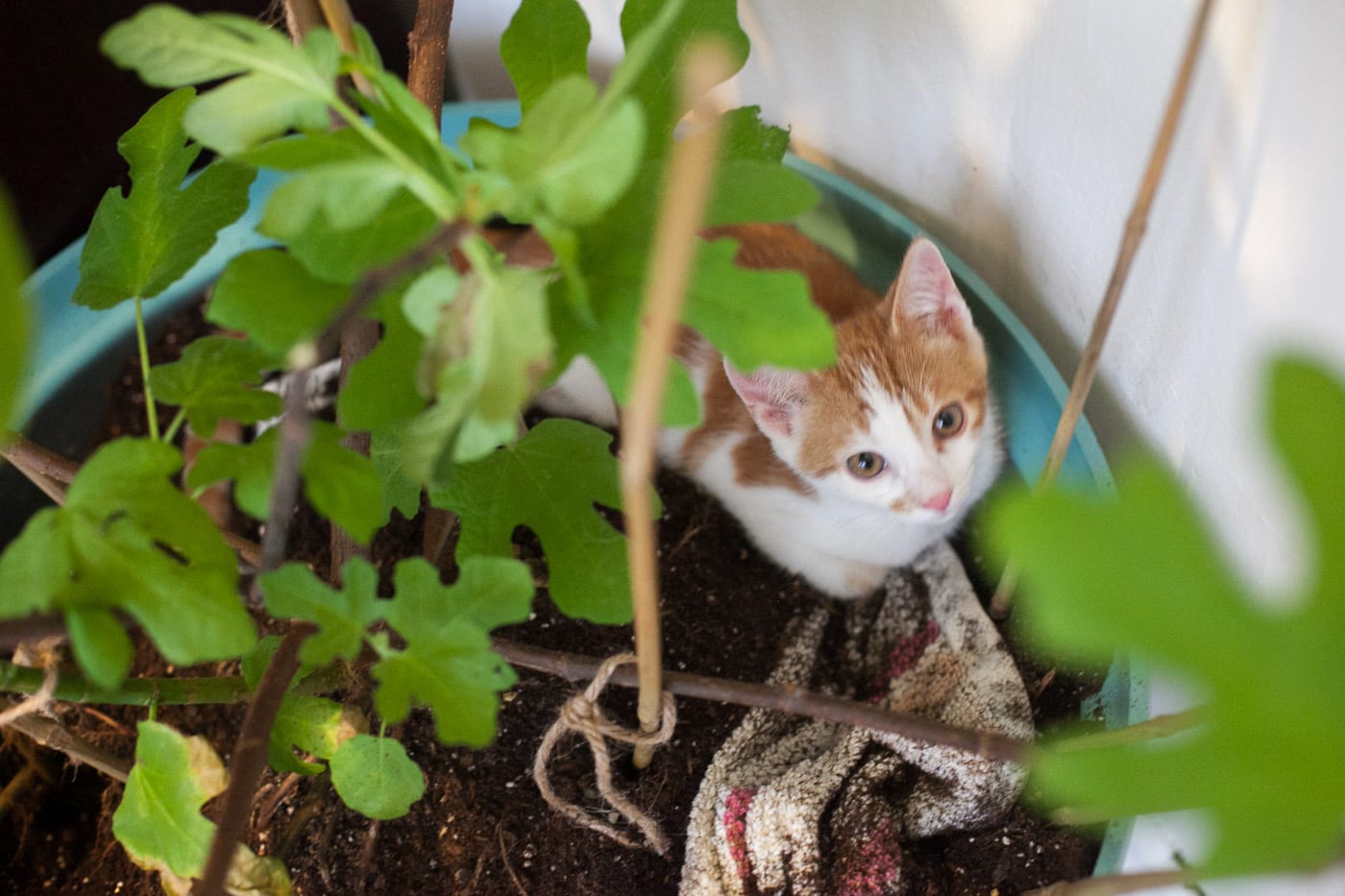 Rooney cat playing in the soil of my fig tree.

Every time I’d turn my back, one of them would be digging in it. Or, trying to eat it.

And did I mention that fig trees are poisonous to cats?

None of it worked. Every morning I’d wake up to a layer of dirt on my floor, a hole in the soil, and one (or two) dirty cat(s). 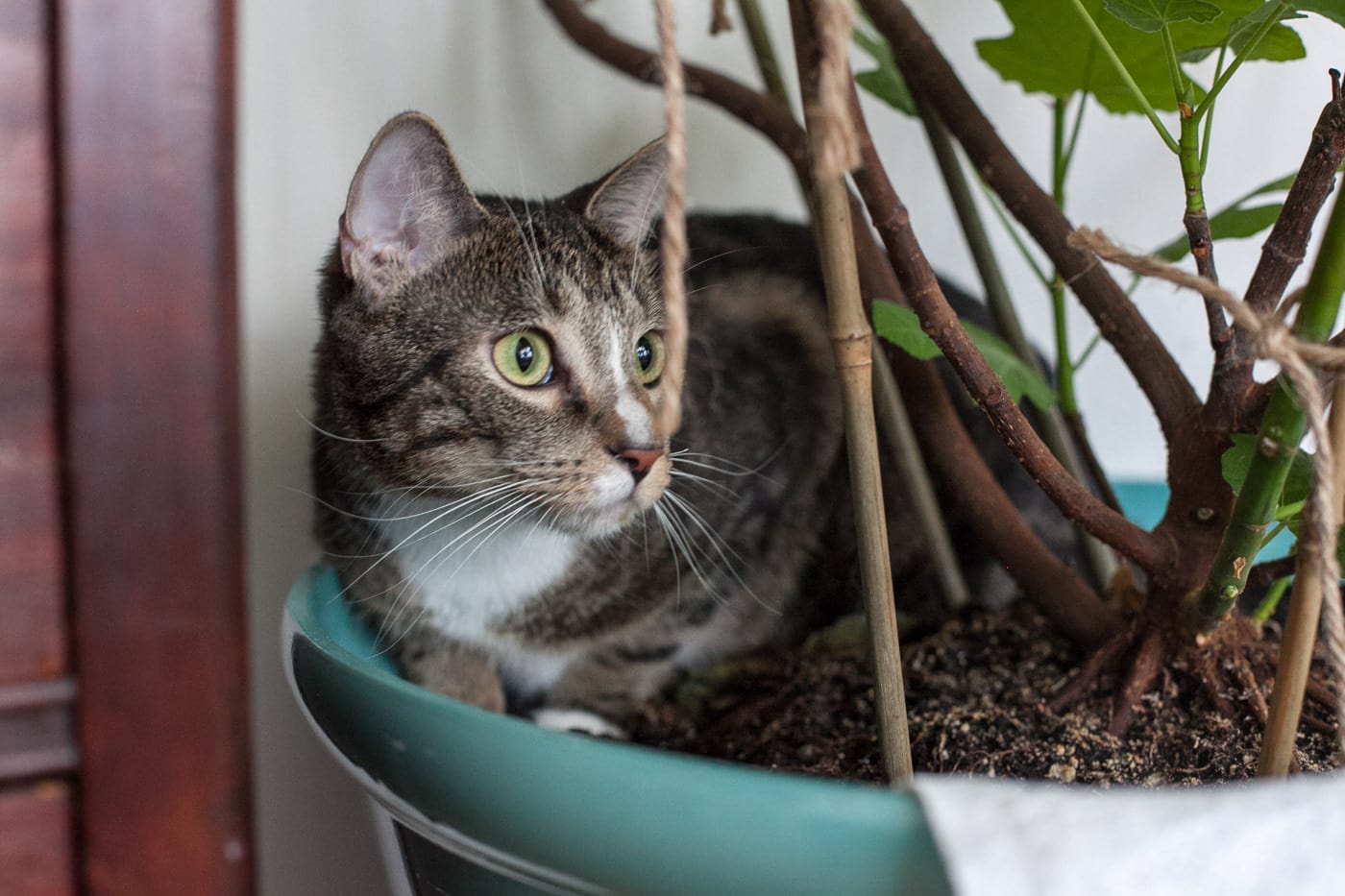 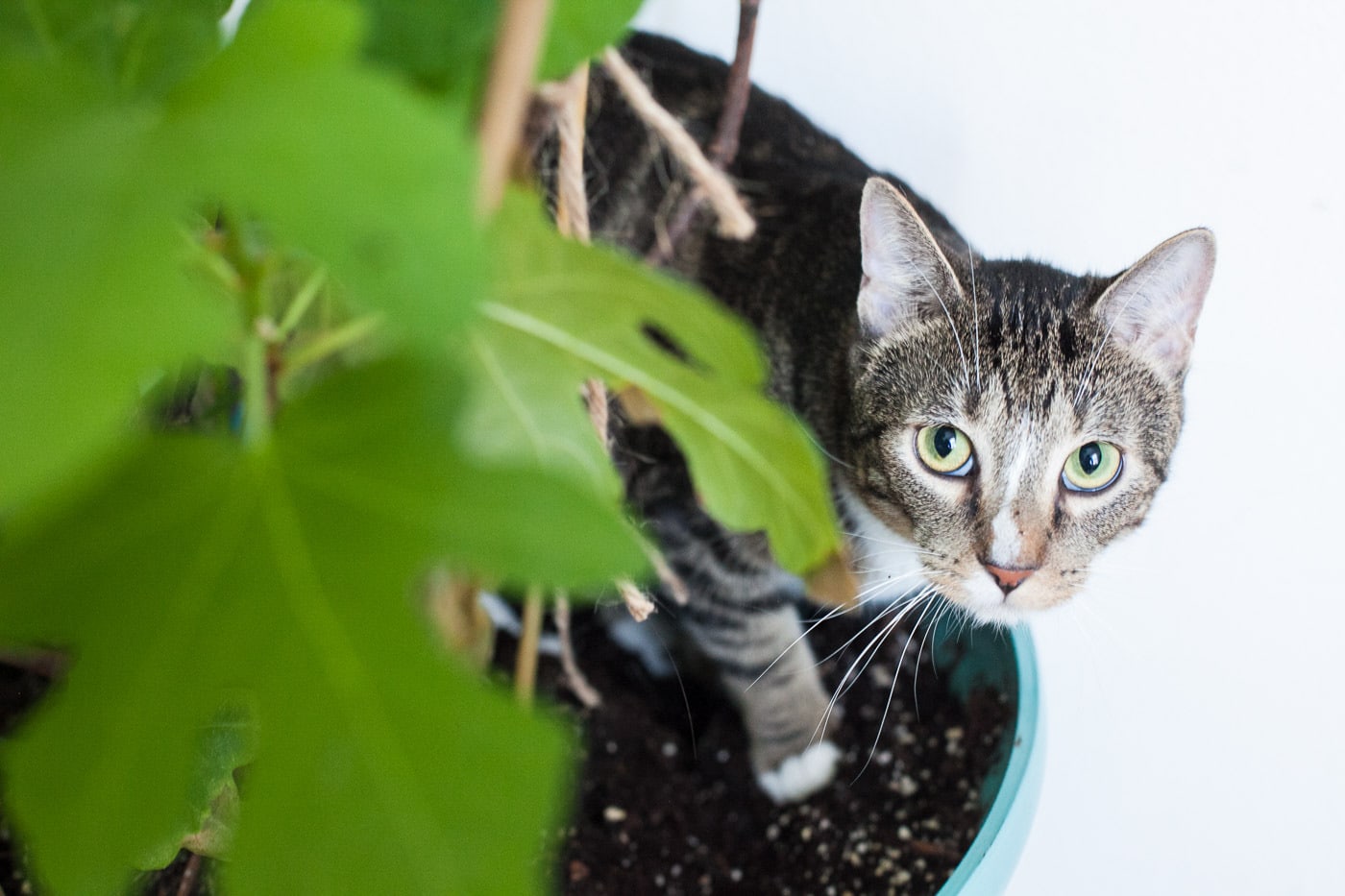 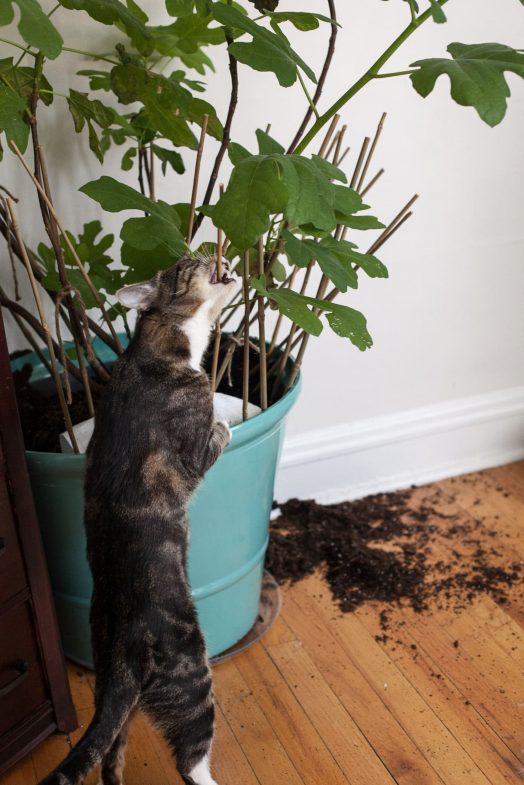 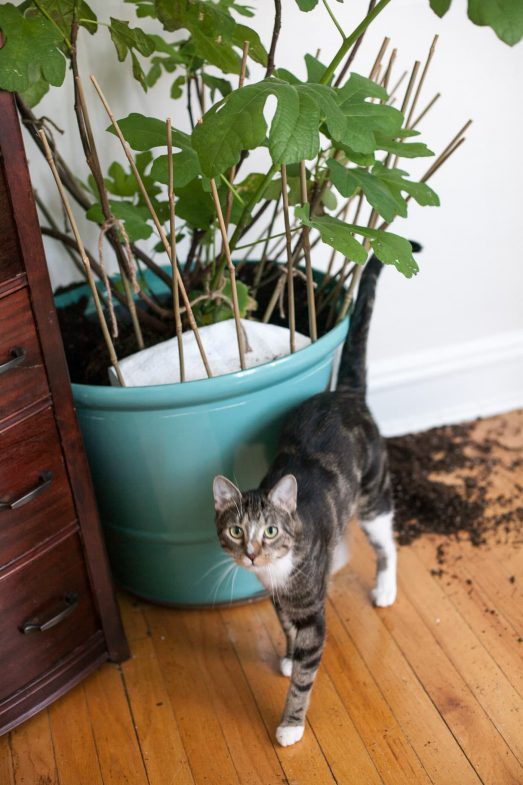 So, I did what any rational cat/tree owner would do: I locked the tree in the bathroom. I suppose I could have just locked the cats out of the bedroom. But then I wouldn’t be woken up in the middle of the night to one biting my feet and the other laying on my head and what would be the fun of that? I mean, trees don’t cuddle.

But, while locking the tree in the bathroom kept the cats out, it presented a whole new set of problems.

If my tree seemed to have been taking up my entire bedroom it most definitely, truly, accurately, literally, took up my entire bathroom. Have you seen my bathroom? It’s not that big.

And because of the stuffiness and being locked away the tree was beginning to die. I’d forget to water it (though it got a little because it was spilling into the shower). I’d knock into the branches. The temperature was all wrong. It wasn’t getting enough sun. The tree had seen better days.

And getting into and out of the bathroom became a pain. My bathroom door jams against the toilet seat whenever you close and open the door, making it impossible to close and open the door in one go. And the extra seconds it took to get into or out of my bathroom often allotted just enough time for one or both of the cats to sneak in and go right towards that tree.

And then the door broke. It didn’t really break break, but I think all the jamming loosened the knob so sometimes when I thought the door was closed it hadn’t really latched. And so I’d come out of my bedroom or the living room, blissfully unaware, and look and see that the bathroom door was open and there were two happy cats with muddy paws and a layer of dirt over every surface: the floor, the bathtub, the sink, the toilet seat.

And that’s when I hit my breaking point. 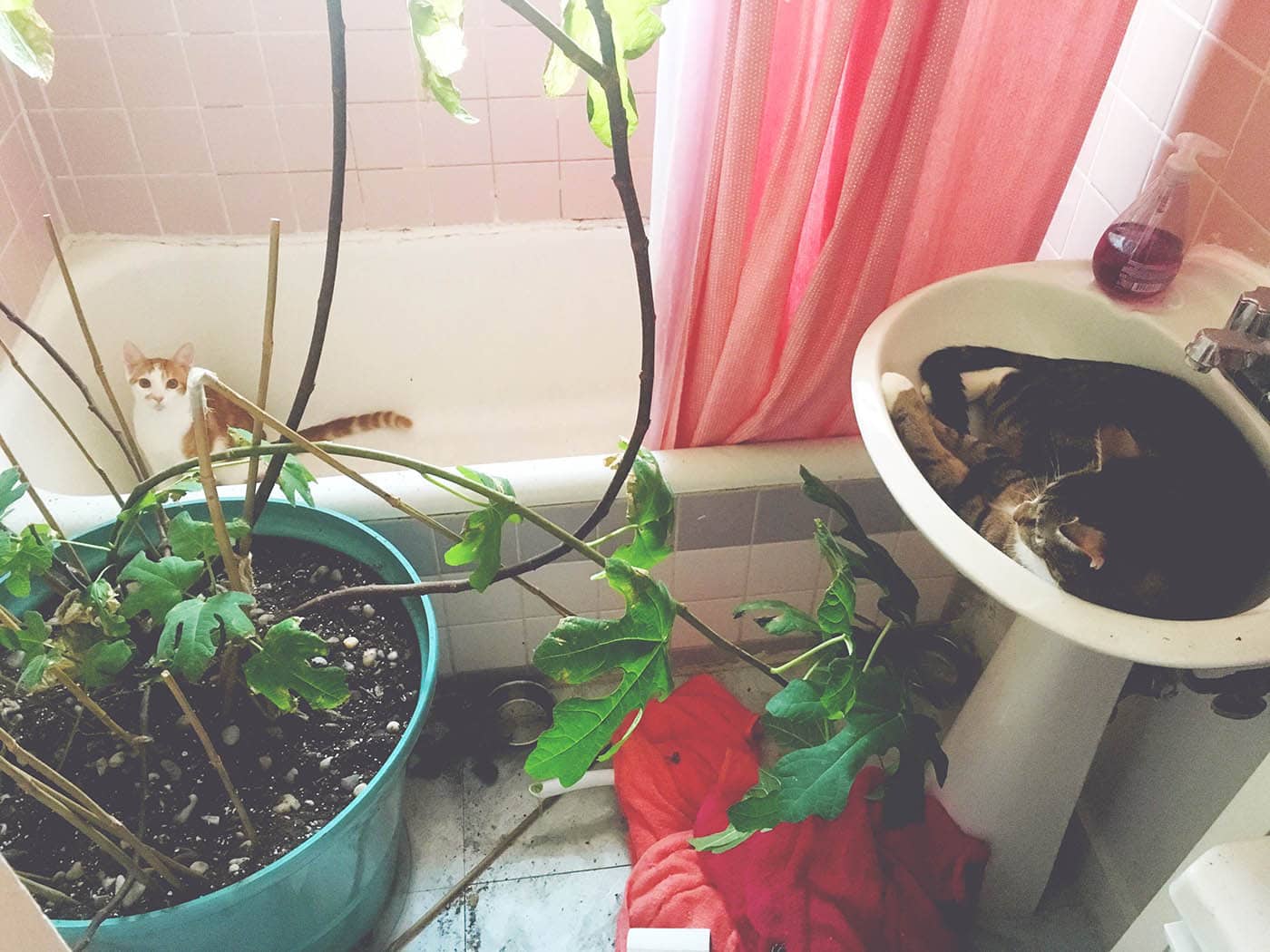 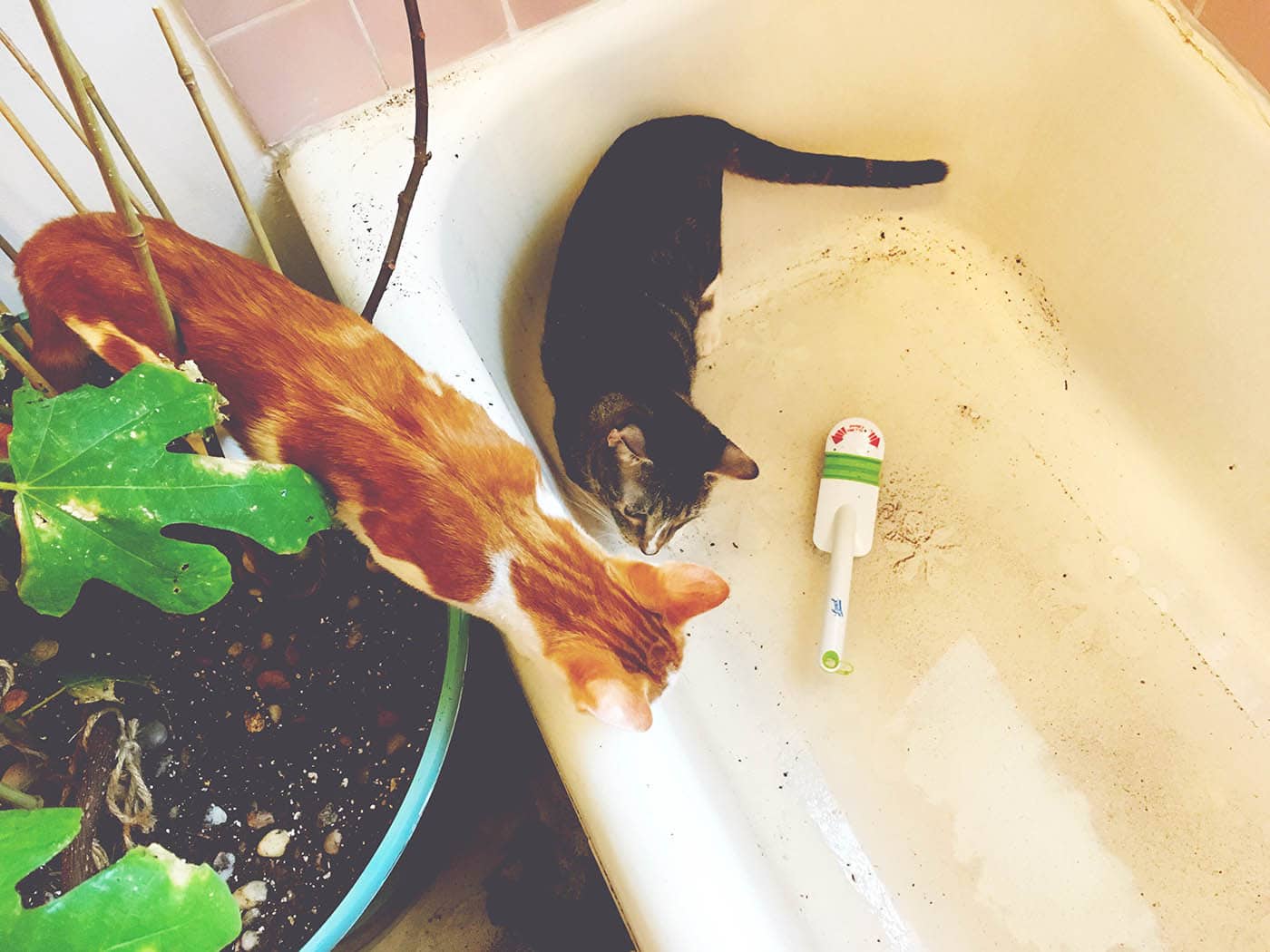 The cats got in the bathroom, and the plant. Chaos ensued.

I put out a call on Facebook too see if anyone wanted to adopt my fig tree and, luckily, a good friend and her husband and family said they’d take it in and another friend came by to pick it up and, you guys, I have a bathroom again.

And I have a pair of foster cats who have to find other ways to get into trouble (and they do, believe me, they do). 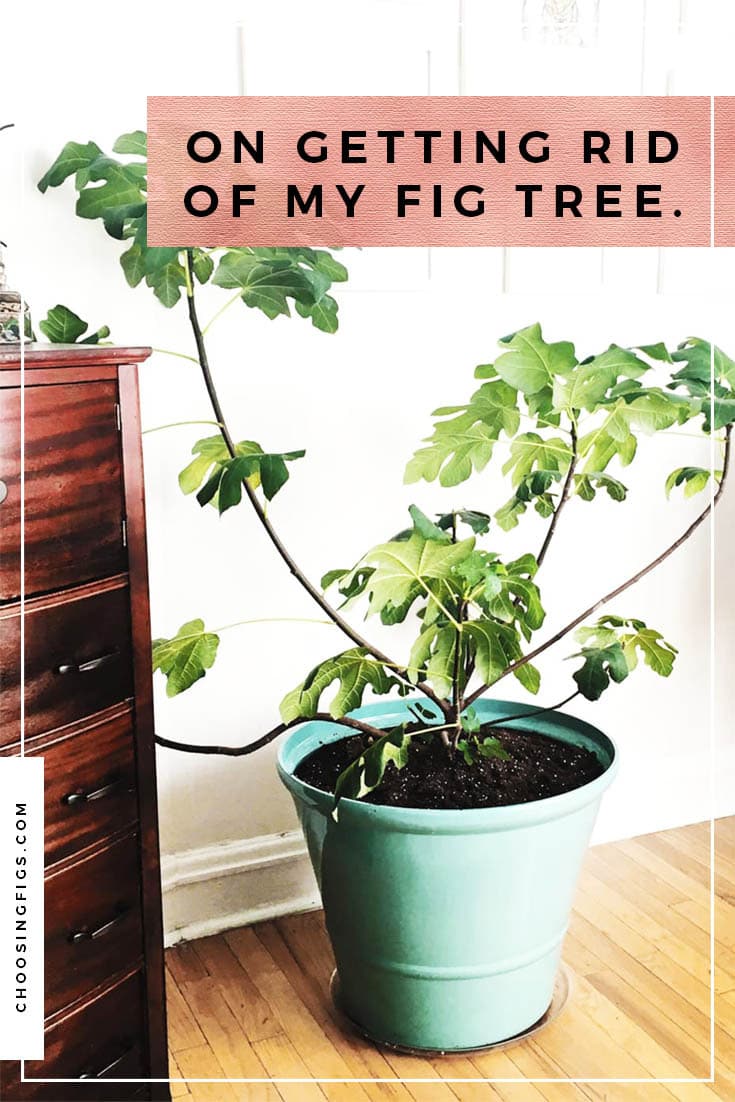 Replacing things that don’t need to be replaced.

Next post
Replacing things that don’t need to be replaced.

Things my cats have destroyed: Two vases, knocked down from a shelf. A snow globe photo frame that forever left glitter glued...