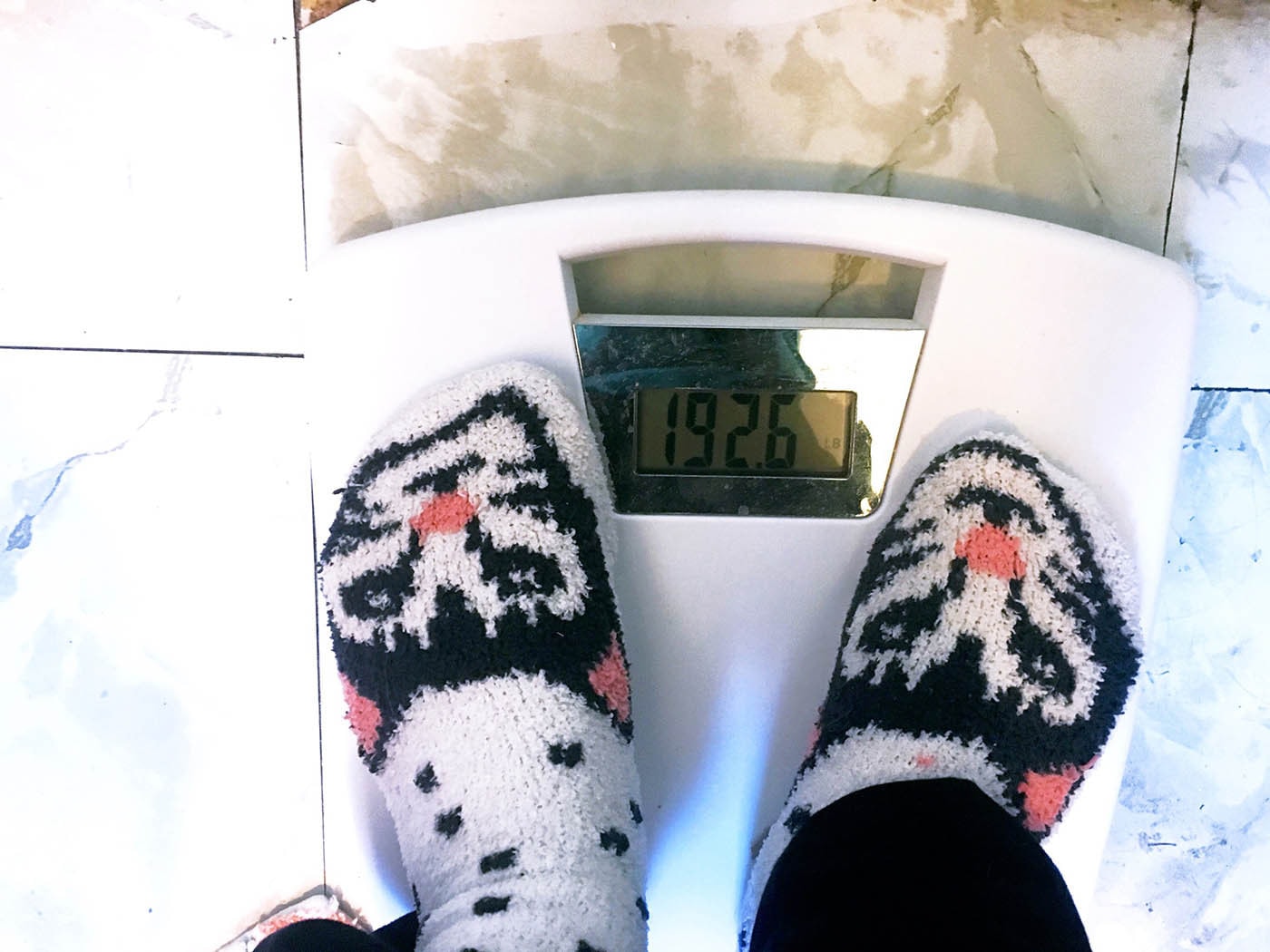 I knew I was fat when people stopped saying, “you’re not fat,” when I said I was fat.

Maybe you know how it is. You know you’ve gained weight. Maybe you’re ten pounds over what you wish you were. And you look in the mirror and think, “I’m so fat,” even though, to everyone else, you look just the same as always. And so, when you say, “I’m fat,” they all reply, “What are you talking about? You’re not fat.”

I knew I was fat when an old woman surrounded by bags of groceries reached around another woman to offer me her seat on the train.

I really knew I was fat when a boy said, “Oh, you’re really pregnant,” and then offered me his seat.

I am not really pregnant.

I declined the seat.

I knew I was fat in 2016, when the number on my scale inched higher than it ever had reached before. Then, determined, I started working out, going to the gym, walking everywhere. And I lost ten pounds. I was far from my goal weight. Far from no longer being fat. But I was making progress. And then, I stopped. I stopped going to the gym. I stopped taking ten-mile walks. I stopped trying. I went on vacation, got out of the obsessive habit, and just couldn’t get back into it.

I knew I was fat when I looked at my scale a few weeks ago I weighed over 190 pounds.

After a season of feeling depressed, gorging on chocolate, drinking too many peppermint mochas at Starbucks, overeating in general, and being pretty damned sedimentary, my weight had finally climbed closer than ever to 200.

Of course, my normal reaction to such devastating news would be to crawl into bed with a carton of chocolate peanut butter ice cream and cry. But, for once, that solution didn’t seem to be the best idea.

Me. On the scale. One the first of the month. This was the first time I weighed myself and it was over 190 pounds.

We’re now told from all angles to be okay with our body. To be OK with ourselves. Self love. Body positivity. All that. But, I’m not OK with my body. OK? My body disgusts me. My stomach, which, for so long, was growing bulbously outward, is now sagging downward. My thighs balloon beneath me when I sit. My face has no distinguishable features.

I am not OK with my body.

And, because I am not OK with my body I’m not OK with a lot of things. I avoid dating because I feel too fat to date. I don’t swipe right on guys I find attractive because I can’t imagine myself next to them, twice their size, and them being attracted back. I’m not OK going out on weekends because I have nothing to wear that makes me feel cute and not like I’m in my third trimester. I avoid pictures of myself taken at anything other than an angle 90 degrees above my head because I just see a blob of my former self.

I am not OK with my body. 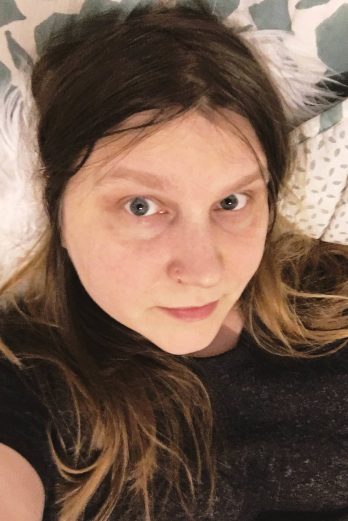 Photo taken from above. 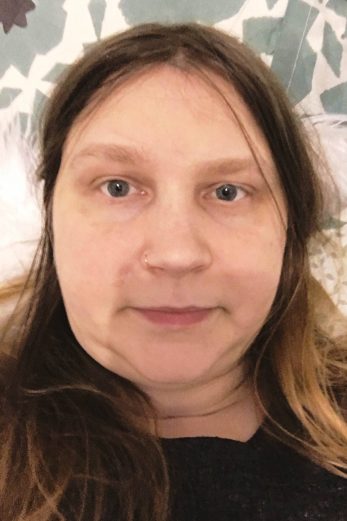 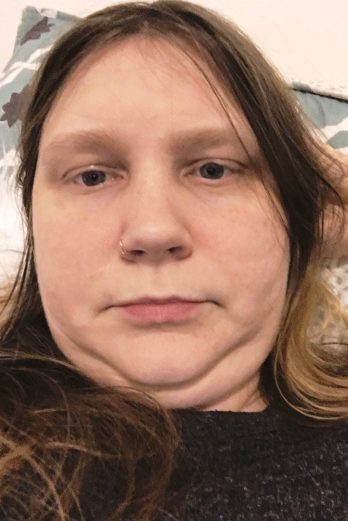 Photo taken from below.
The trick to looking OK in photos is to take them exclusively at an extremely high angle so as to not show your three chins, like if you take it from below.

In high school, I weighed 98 pounds. I remember this because in driver’s ed, when we applied for our learners permits, the gym-teacher instructor said you had to fill it out differently if you weighed under 100 pounds so I just filled in 100 to not have to ask how.

I now weigh twice what I weighed in high school.

Granted, that was nearly twenty years ago. And, in twenty years it’s expected to put on some pounds. But, maybe not an entire person? Especially when that original person weighed mostly what her bones did.

Isn’t it the popular bitches that are supposed to get fat? Not the unpopular theater geeks?

I started a diet on January 1. Happy New Year to me.

I’m not really following any particular diet, though I am starting out with a lot of Whole30 recipes. Mostly because Whole30 recipes eliminate sugar. And, I know, that sugar is my biggest enemy. And I need to drastically cut it out of my diet.

I’m not attempting to do an actual Whole30 program or anything right now. Mainly because my birthday is coming up soon and, let’s be real, I plan to treat myself.

But, that, here, is part of the point. Treat myself.

An occasional doughnut? Sure. Two doughnuts a day a few days a week? Probably no.

An occasional Coke? Sure. Two to three cans (or worse, bottles) every day? No.

An occasional scoop of ice cream? Sure. An entire carton in one sitting? Sigh. No.

I don’t need to start my day with a sugary drink at Starbucks, have a doughnut at work, have a Coke for lunch, a Coke for dinner, some candy in between, and a dessert to top off the night.

As much as my cravings tell me that I do.

And, considering I’ve made it a week and a half without drinking soda, without chocolate, with only a very teeny tiny small amount of refined sugar at all, I don’t need sugar.

As much as my cravings tell me that I do.

Because, let’s face it, I can’t eat the way I do and become anything more than a Violet Beauregarde blimp. And because, maybe, at some point, I’d rather have a boyfriend than a doughnut. And I’d rather look in the mirror and like what I see than have a can of Coke.

A delicious, refreshing, bubbly, crisp, sugary can of Coke. 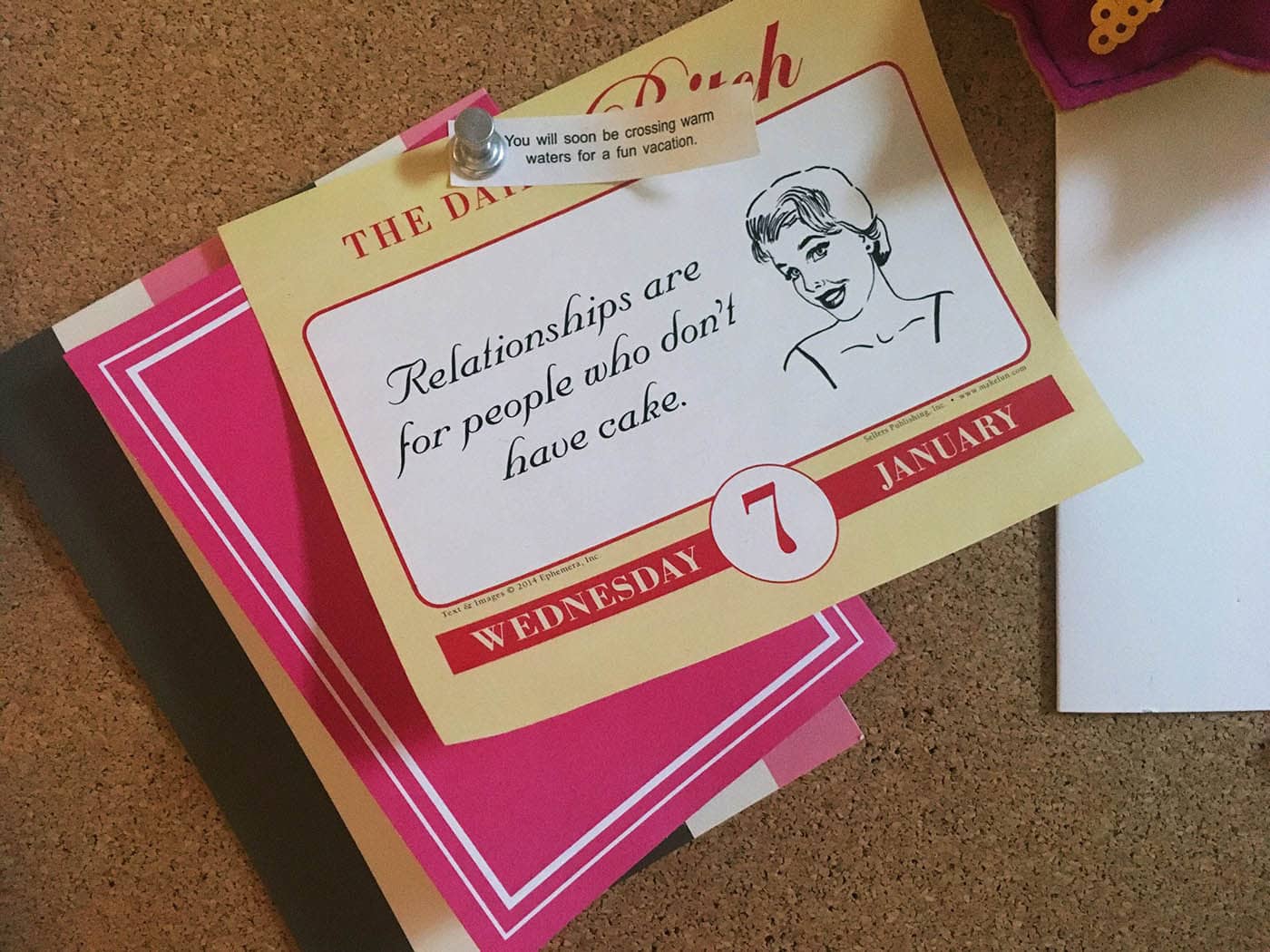 My former mantra: relationships are for people who don’t have cake.

OK, so, it’s not all that easy. I constantly crave Coke and chocolate and all things sugar. And it’s so much easier to order whatever I want from a takeout menu than to plan my meals ahead. And cook them. And there is so much temptation at every turn. And I’m probably going to fall off the wagon at some point and binge eat my way through an ice cream shop.

But I’m not OK with my body. And, so, maybe, it’s time to stop listening to my body when it’s constantly screaming, “feed me sugar!” Maybe it’s time to force myself to make a change. 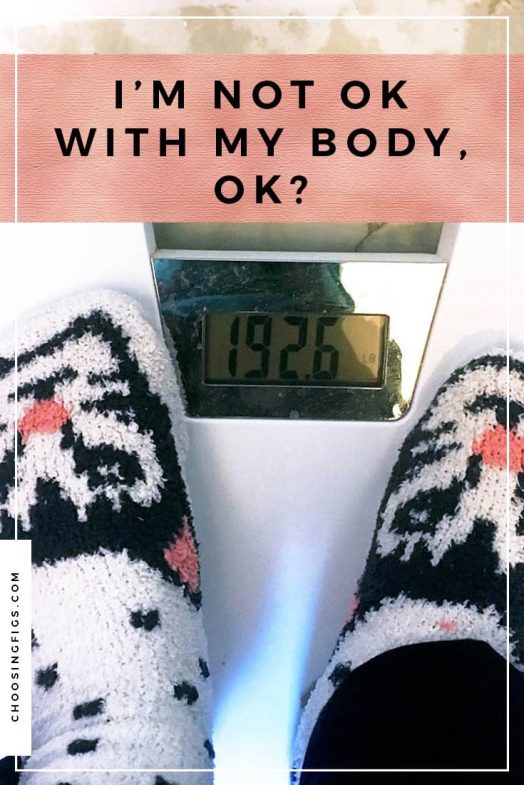 I’m not OK with my body, OK? On struggling with my weight. 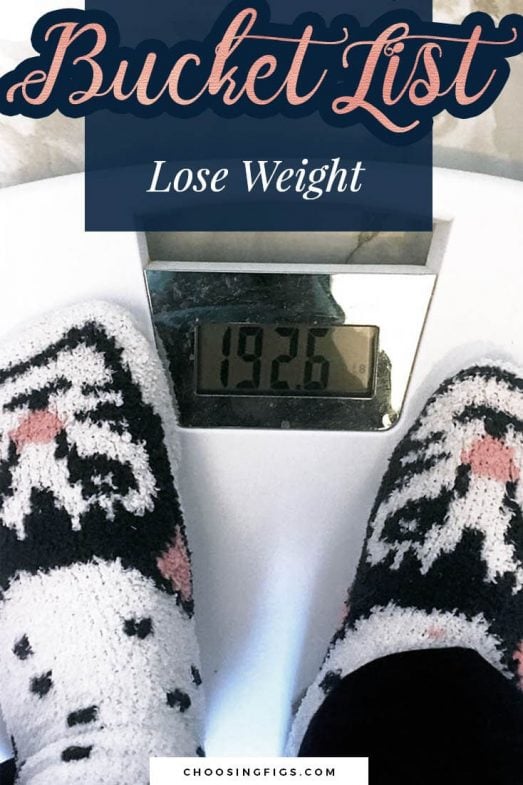 Bucket List Idea: Lose Weight. | I’m not OK with my body, OK? On struggling with my weight.