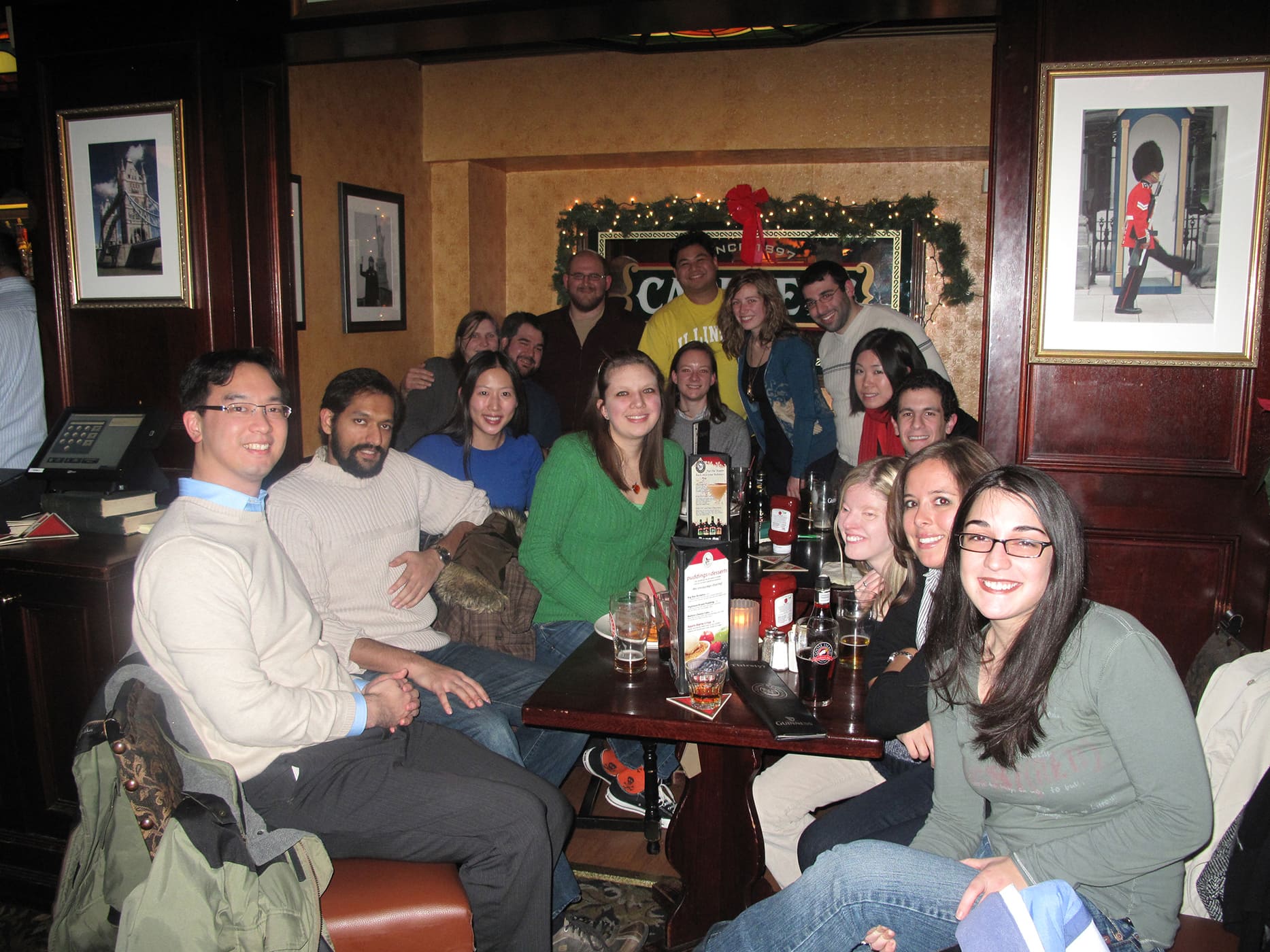 1. There is a new French Market near my work downtown. Which is amazing because they have lots of little lunch places like a crepe stand and a cheese shop where you can get a really delicious duck sandwich 🙂 But I am most excited about the fact that they are getting a Belgian frite stand! You don’t know how excited I am and how long I have waited for a Belgian fritestand! 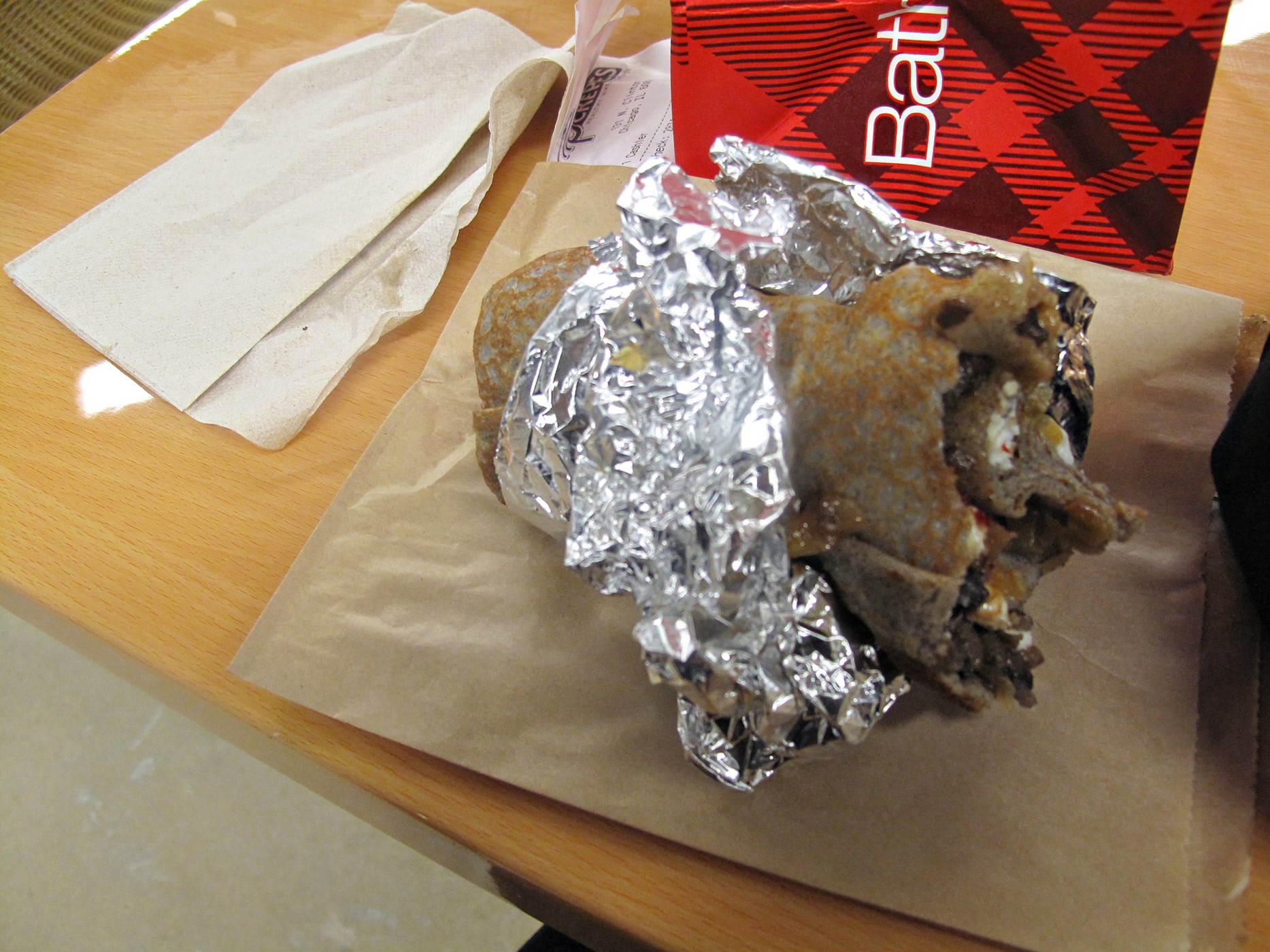 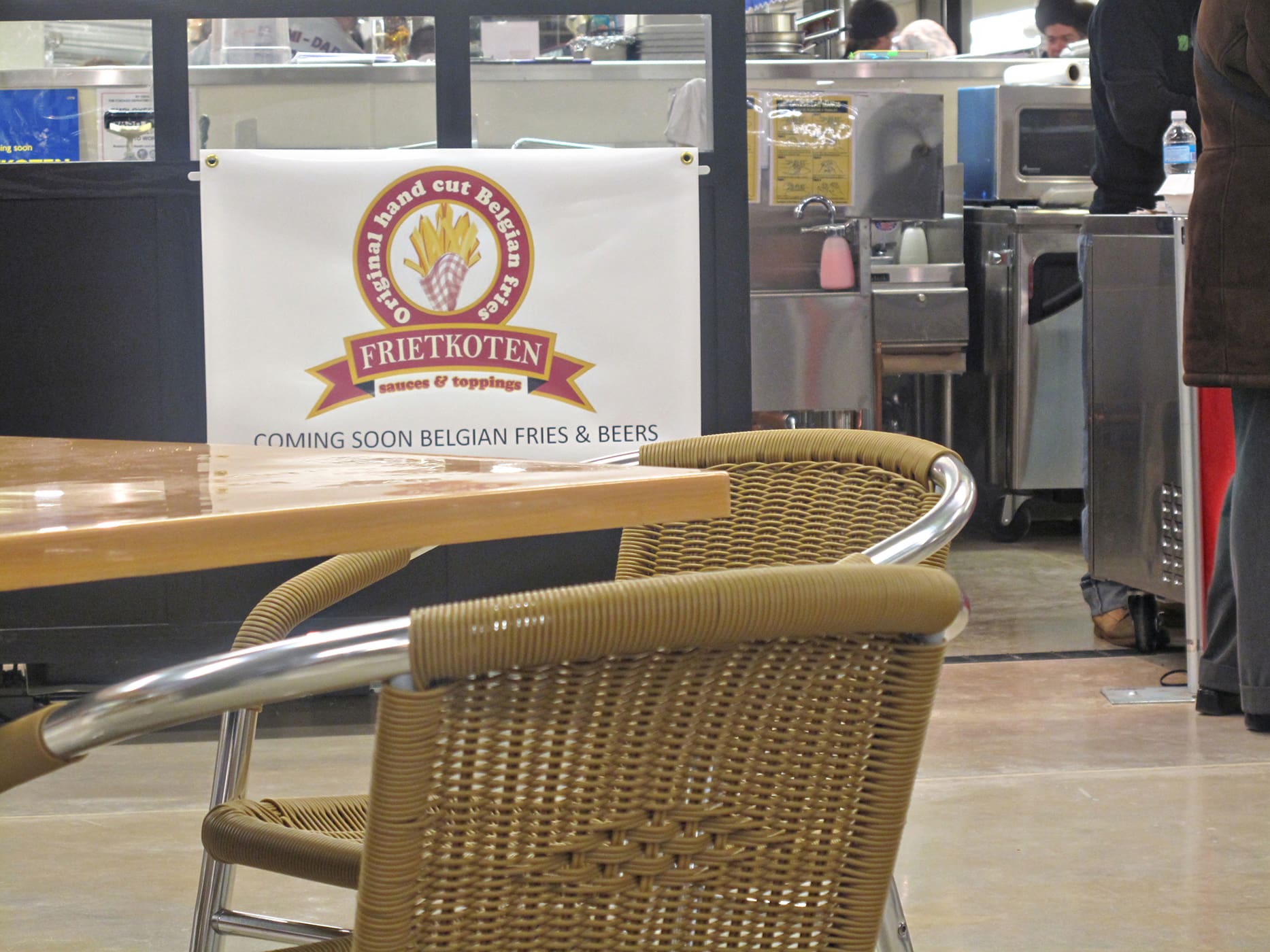 2. Yesterday I successfully made coffee in my coffeemaker. I rock. I have devised a new savings plan: for every day that I don’t go to Starbucks I will transfer $3 into my savings account.

3. The other night some KCSA alum met up at Elephant and Castle for a holiday dinner reunion. It was fun seeing a bunch of people I haven’t seen in a while! And getting fish and chips. And a brownie. 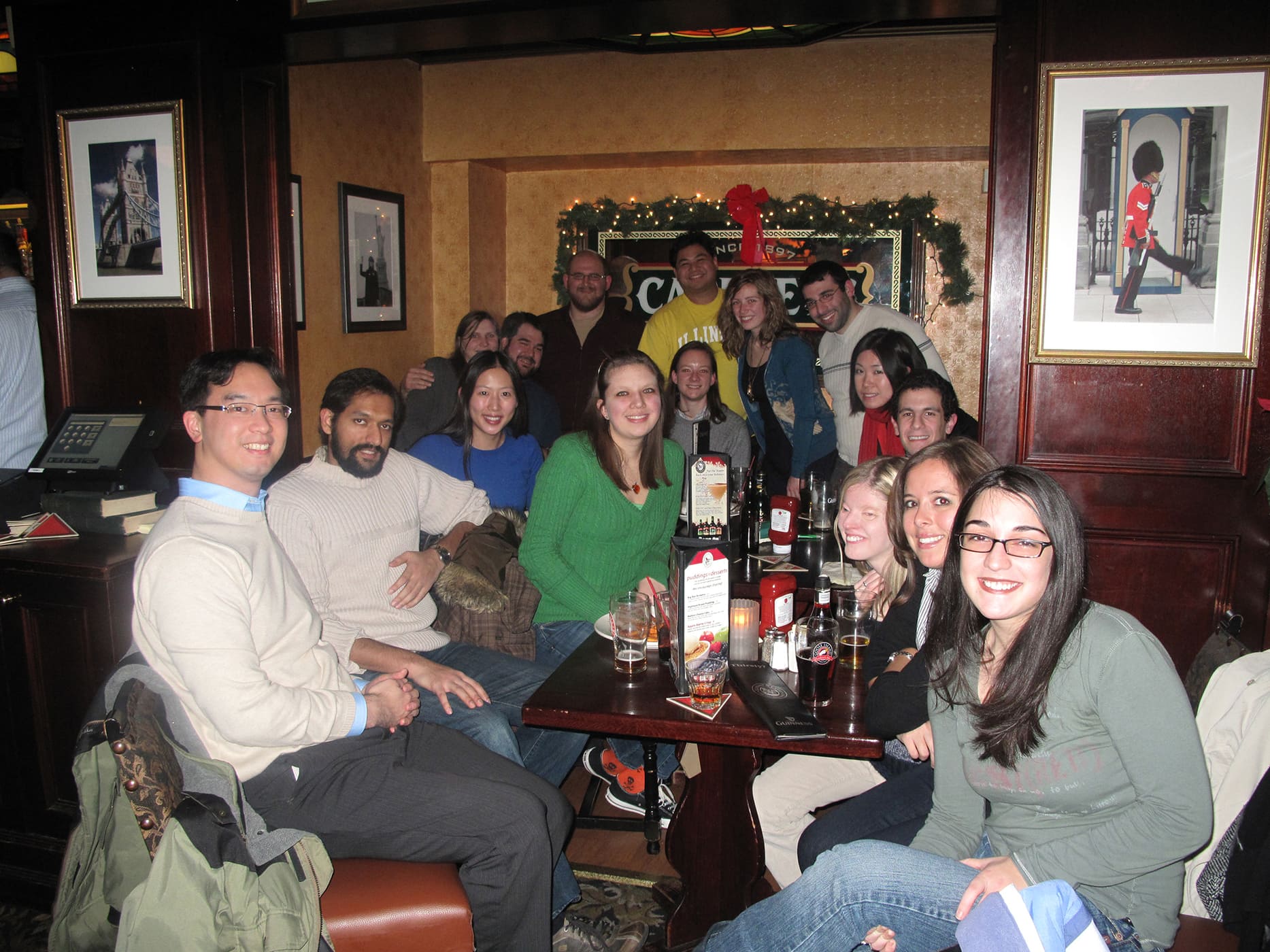 4. I ate brussels sprouts yesterday for the first time. They came in a pre-made meal from Whole Foods. They were quite tasty.

5. The other night I finally saw The Hangover. Chelsa and her brother and I were going to go see Avatar but it was sold out, so we rented The Hangover instead. It was pretty hilarious. I actually really knew nothing about the movie except for the basic plot and it was not at all what I had expected. I didn’t know it was that over the top of a movie. But it was really funny.

6. Chelsa and I also got pizza the other day from Frasca. I had potato bacon pizza that was good but did not curb my craving for Piece! 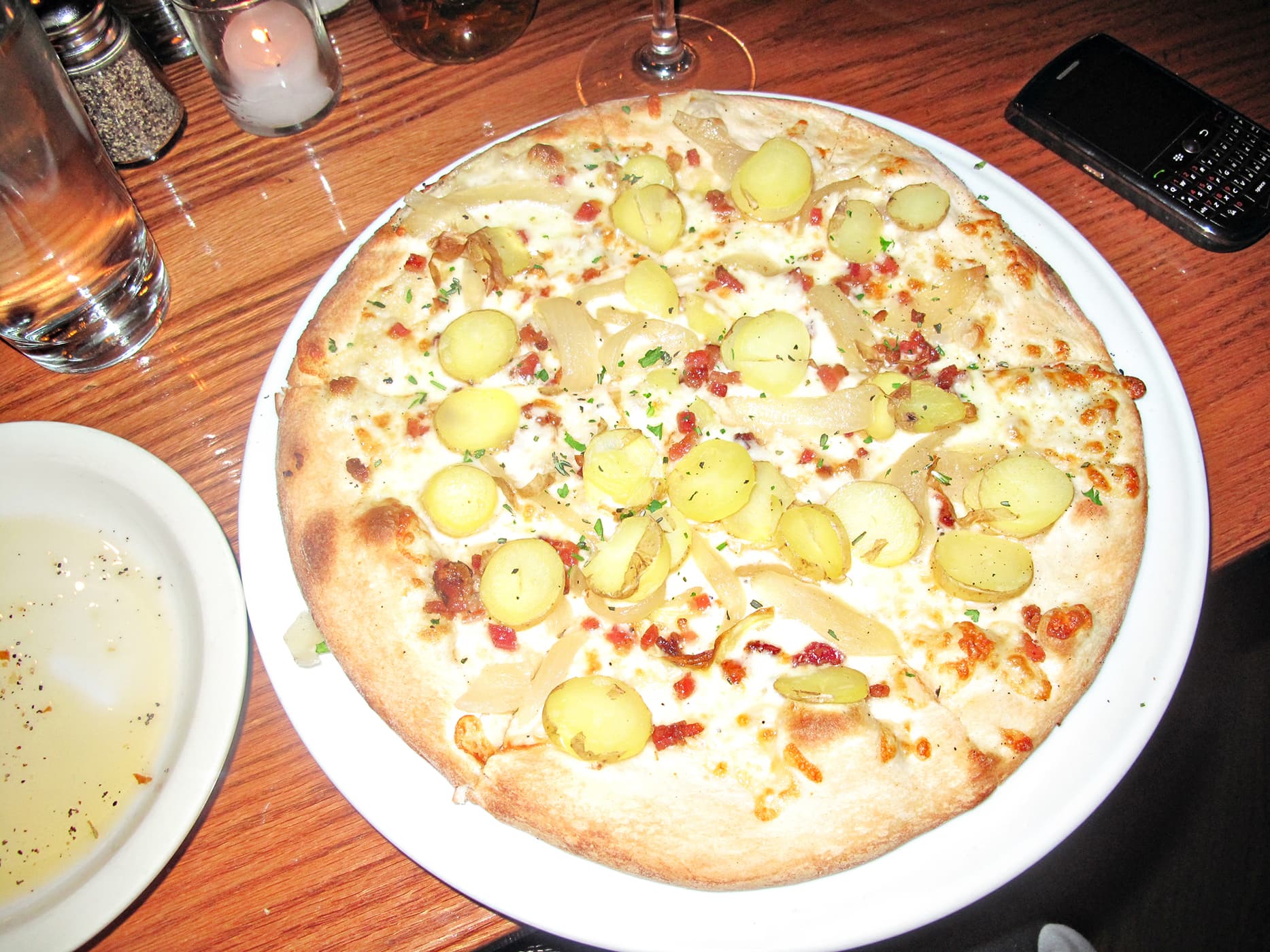 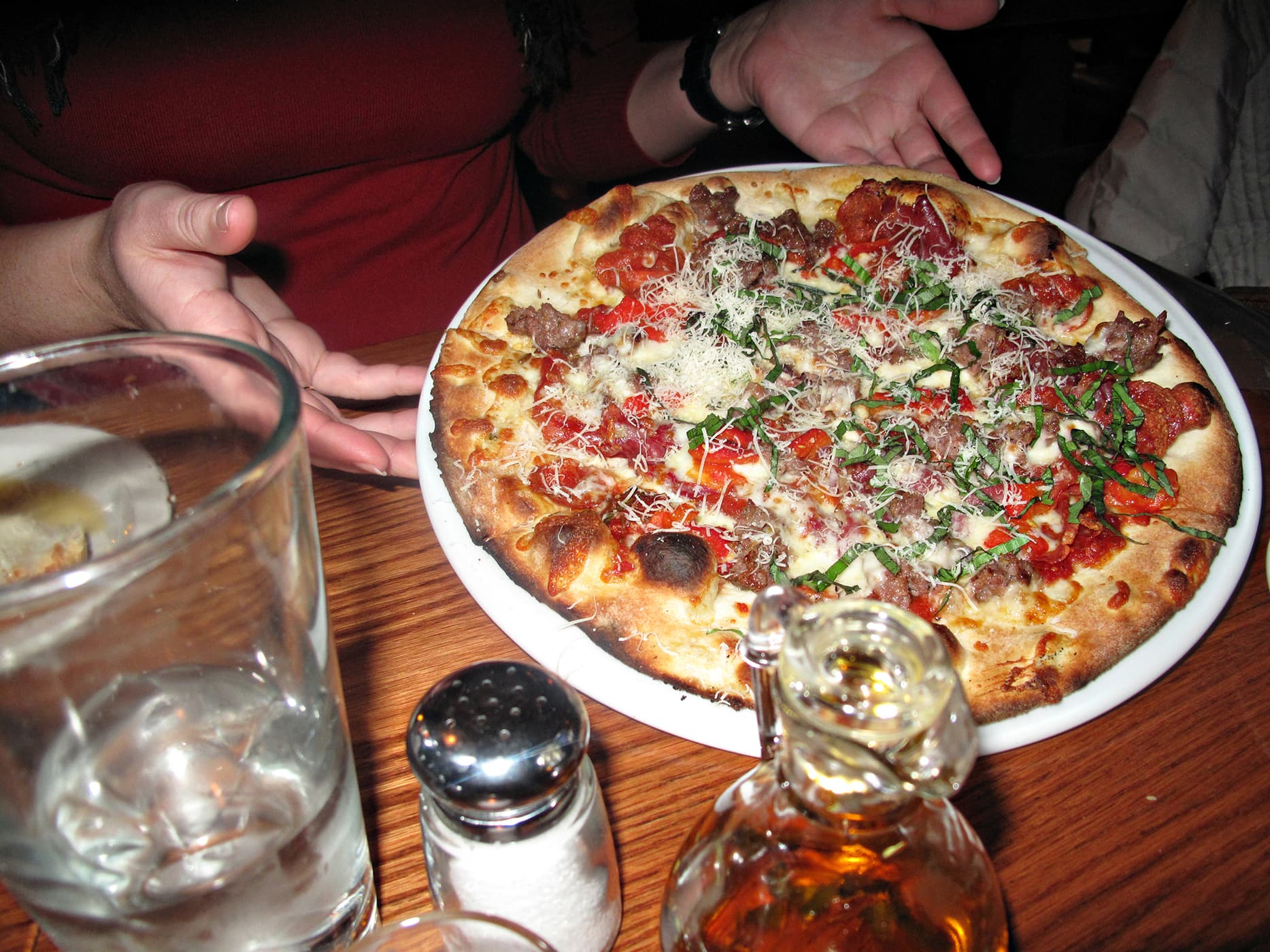 7. Last night Jen and Glen had a housewarming party for their new apartment! There was lots of wine and appetizers. And Glen tried his best (and failed miserably) to get the chocolate fountain to work…so we just roasted the marshmallows by candlelight. At the end of the night some Mario Party was played…and we all made fun of MK who just happened to win all of the games that required you to hold the controller in one hand and move it up and down…he must have had a lot of practice! 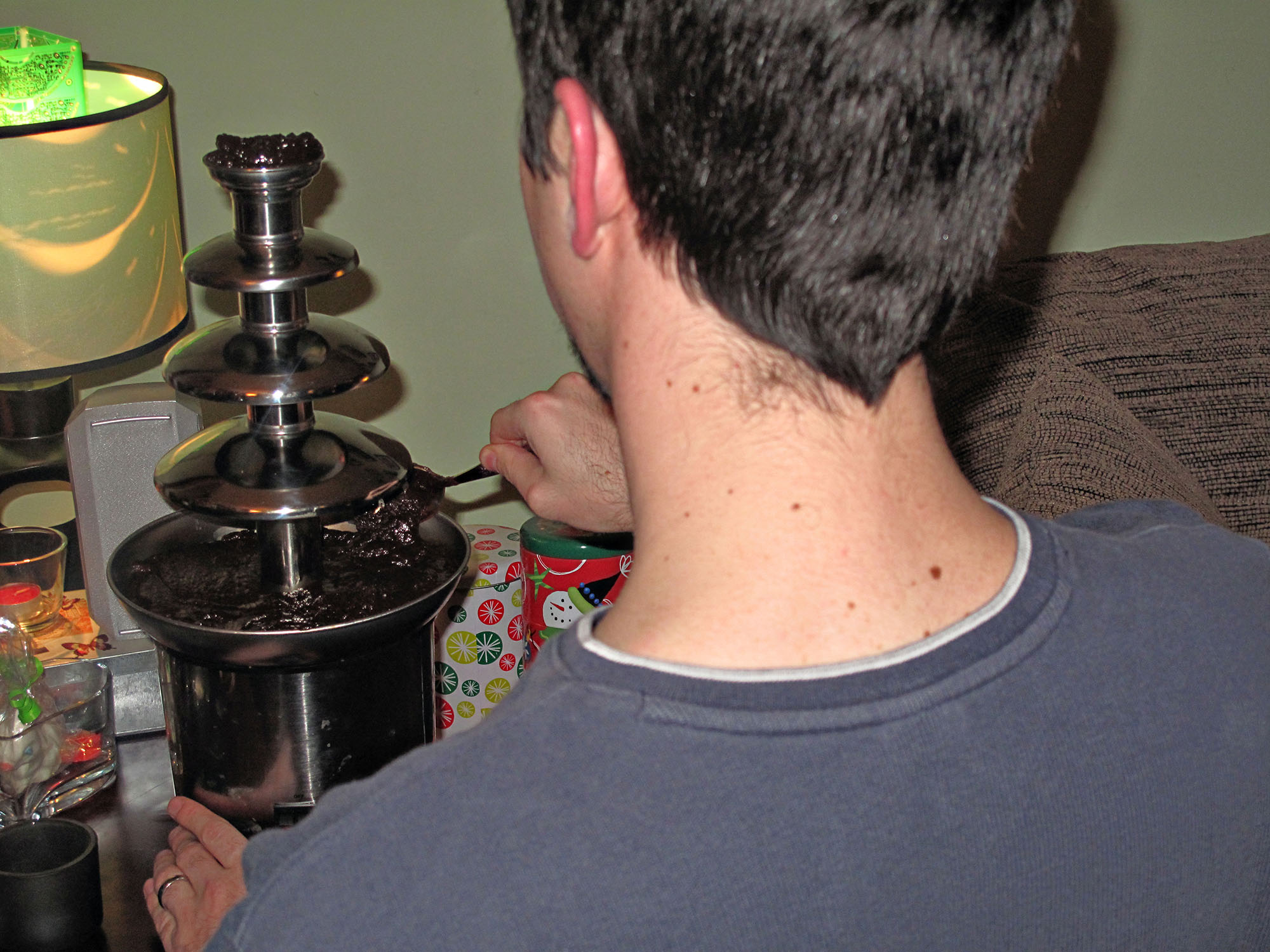 8. After the party I headed out to a bar to meet up with Mat. Then we went and got burritos and watched Up on blueray. I was crying pretty hard within the first five minutes. It was so sad! I fell asleep before it ended so I have to watch the end 🙁

9. And finally, I leave you with a conversation between me and Scott that pretty much sums up how our conversations go:

Scotty: either you did something to it the night before or that night need to stop having rough sex, I guess. Sorry.

me: i just think i keep aggrivating it
since it started hurting i stilld ecided to clean my whole apartment (including taking down garbage three flights of stairs several times), bringing down presents, bringing up presents, rough sex
today was the first day i just got to rest

Scotty: that’s probably best for you.
see how it goes the next few days, then maybe see a doctor otherwise
and no sex, well, unless you can not move your back as much

me: i’m a girl, i can just lie there and take it

Scotty: well true, but it won’t be as much fun (to be fair, I’m only guessing)
maybe I shouldn’t try to think about the physics about how much stress would be put on your back in said situation anyway

Scotty: well, there is pressure being put on you with some compression of the spine and…you know, I think I’ll be quiet
before I either a.) put you to sleep or b.) cause you to slap me

me: haha
does it depend on how big the guy is how much prssure there is?

Scotty: yup, in both terms of “big” I would guess

me: haha
well anyways, i am not planning on having any sex tonight

Scotty: well, then you won’t have to worry about someone else putting extra stain on your back.
as long as your libido can handle it.

me: HAHA, umm “extra stain on your back.” is the best typo ever

Scotty: LOL
I didn’t even notice that
nor did that enter into my mind 🙂
but…its also true as well!

me: that would probably change the physics entirely

Scotty: hmm
I didn’t think about that position actually
that could change the end result
actually, that does invite many new situations that would need to be explored

me: damn straight it would

Scotty: probably best with simulations first in order to try to determine the force vectors and how it would affect the curvature of the spine
and maybe I should stop the conversation before I get slapped