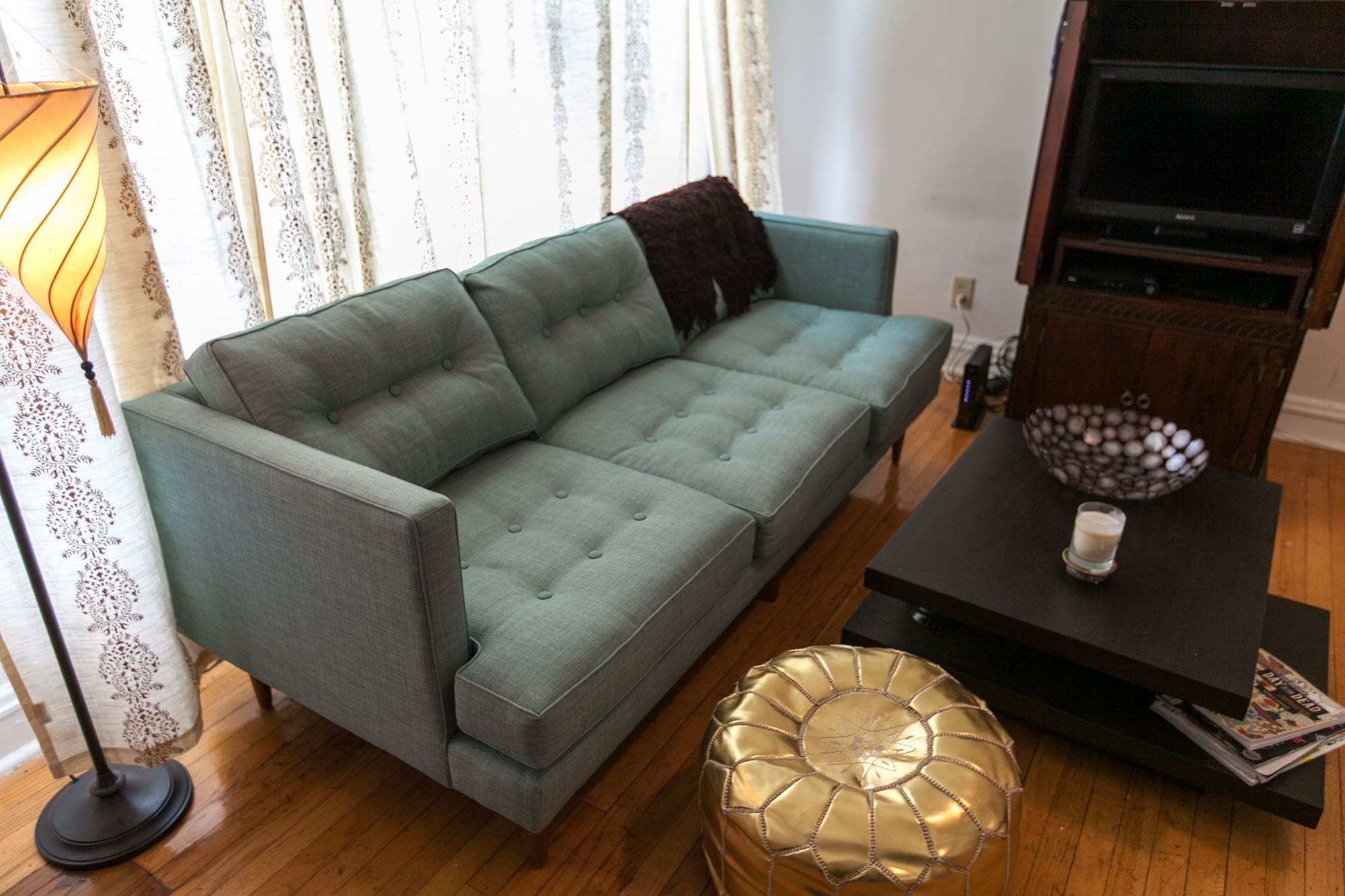 Home » Blog » Apartment » Living Room » I live here. With a couch and everything.

A new teal couch and a living room plan.

This post contains affiliate links from which I might make a small commission at no cost to you.

I live in Chicago. I think that’s official. I’ve been here for seven months. I have a job. I have an apartment. I have furniture in said apartment.

I think that means I really, truly, live here.

It’s something I’m totally fine with until those times I’m not. Until those times where I realize I could be on a beach instead. Or somewhere warmer or colder than Chicago depending on the day. Or with my friends at a conference in Spain. Or, literally, anywhere else in the world.

But then I remember that even when I was traveling I spent half my time dreaming of what couch I’d get when I had an apartment someday.

And, let me tell you, those people who rave that you should spend all your money on “experiences” not “things” have never had a couch so pretty they got out of bed in the middle of the night just to stare at it. Just sayin.

Remember back in February when I declared my love for teal couches? A few weeks after that, at the end of February, just after moving in to my new place, I went and bought one.

And then I waited (im)patiently for eleven weeks for it to be delivered because I just had to order it in a custom color and that took 8 to 10 weeks for delivery and ended up being 11 because of course.

But then it finally arrived last week.

And it is beautiful. 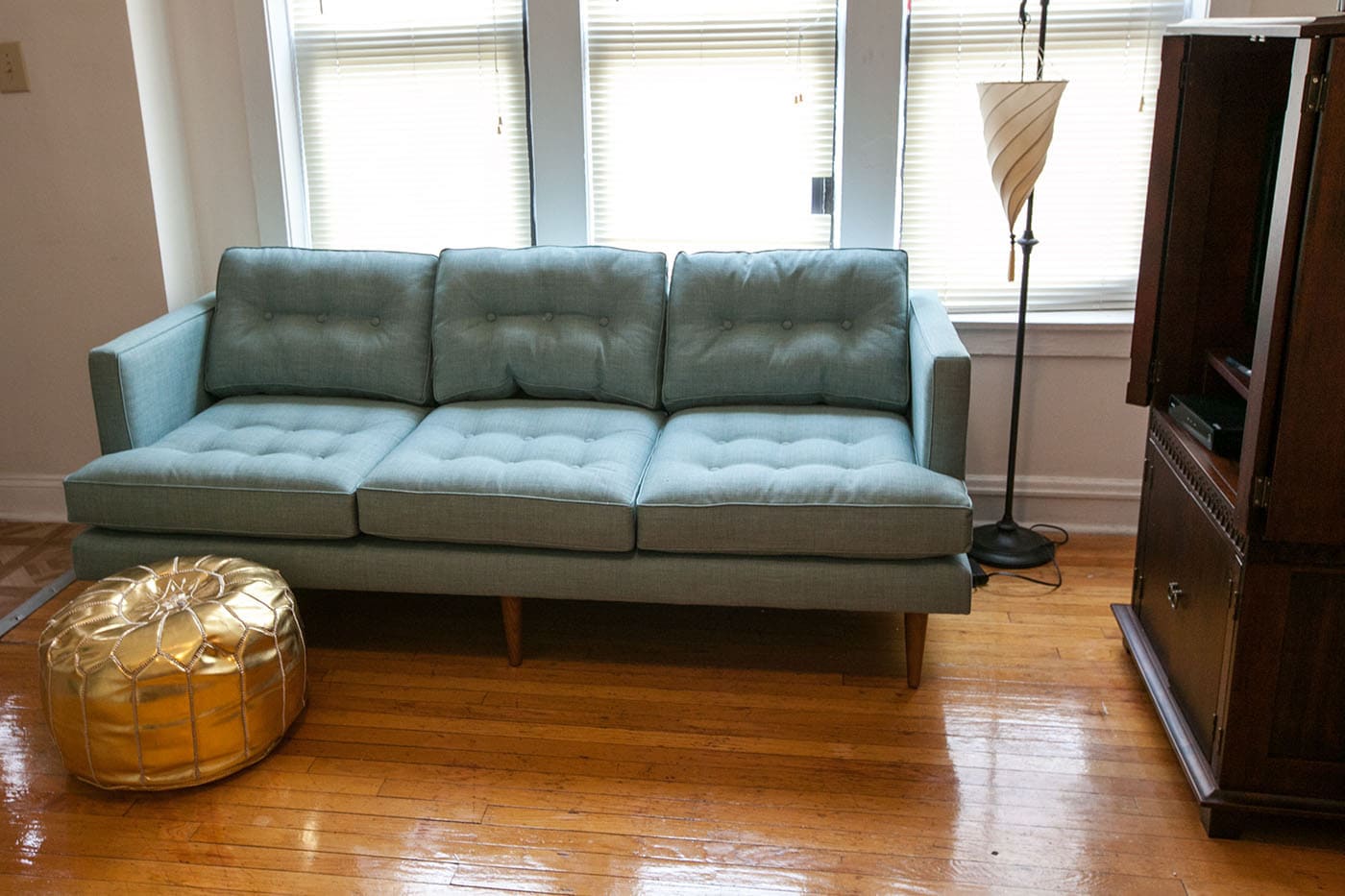 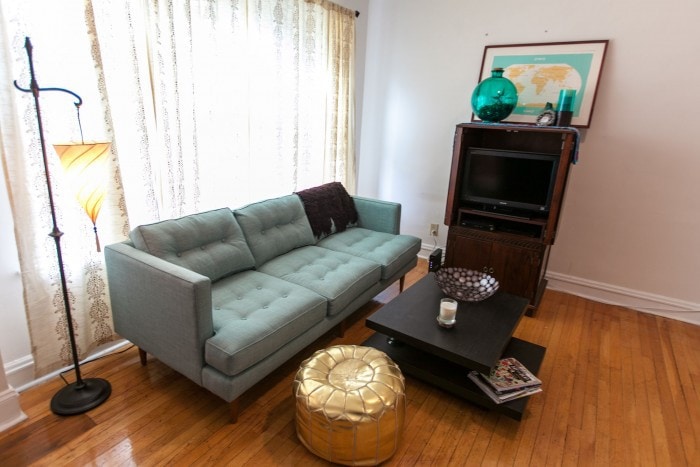 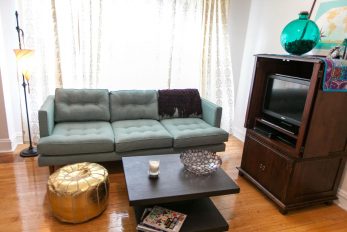 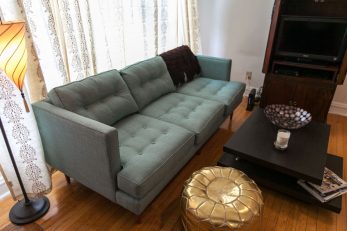 I went with the Peggy sofa in Eucalyptus from West Elm (number one on my compilation). Because I loved the color (which is, OK, more of an aqua than a teal) and the mid-century style. Because I have a not-so-slight obsession with everything from West Elm. And because it was one of the couches I actually got to sit on in the store. And it was comfortable. OK, maybe not sink into the sofa and fall asleep comfortable, but I have a pillow-top mattress for that. But this was at least sit in the living room and binge-watch Unbreakable Kimmy Schmidt comfortable. Which is all that was necessary. And it didn’t feel as stiff as some of the others I tried out. And it’s a good scale for my living room.

Except that I live in fear of all those buttons popping off and I won’t eat on it because the one time I broke that rule ice cream just fell off my spoon because of course it did.

See? Owning a couch is totally an experience.

It’s something to come home to. Something beautiful to look at. Something that turns this from an empty apartment into a home. Into my home.

I still have a ways to go with decorating. I need a rug, a chair, a bookcase. I need more surfaces to put more photo frames.

But, at least, I now have somewhere to sit and binge watch Netflix.

What are my plans for the rest of the room? I’ve been calling my style “Mid-Century Global” or “East Meets West (Elm)”: mixing mid-century modern and global pieces. Which is really fun because I have tons of accessories I’ve bought around the world on my travels (OK, and some that just look like I bought them on my travels). Here’s an idea of what I want the room to look like: 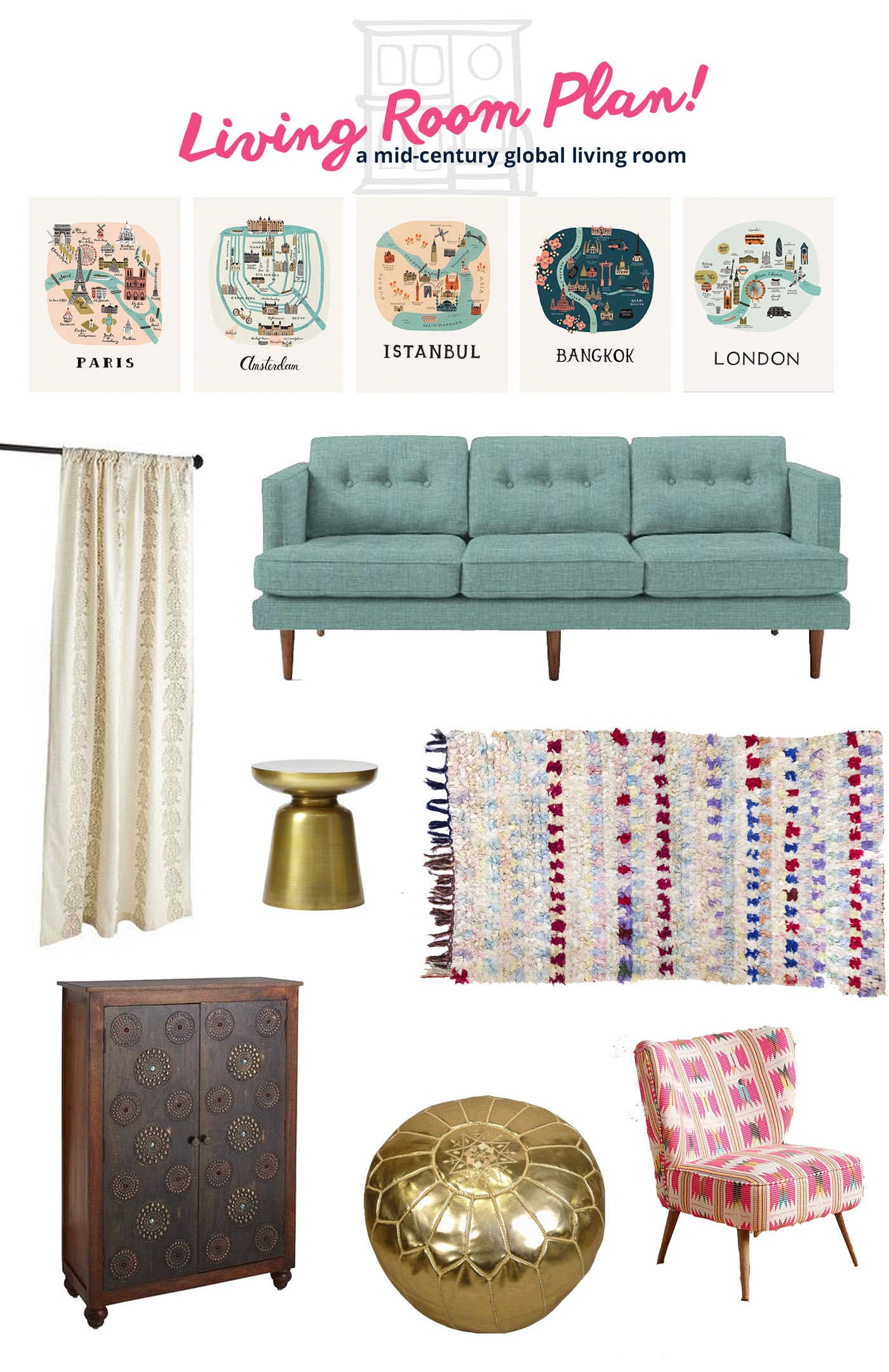 Art: I kind of love everything from Rifle Paper Co. (As seen on my phone case). I especially love the travel prints, and own five of them (Paris, Amsterdam, Istanbul, Bangkok, and London), all cities that hold a special place for me. I just need to find the right wall for them. And get frames. And figure out how to hang them up without tearing massive holes in my plaster walls.

Curtains: The gold damask curtains pictured above are from Pier 1. You probably can’t see them that well because my apartment is super sunny so taking pics towards the window is hard. Not that I’m complaining, the super sunniness is what made me fall in love with the apartment. I love that the cream blends with the walls but the gold makes them stand out, but still seems neutral behind the bright couch. Plus the damask pattern is like totally global.

Couch: My Peggy Sofa in Eucalyptus from West Elm. I’m. in. love.

Side Table: Martini Side table in antique brass from West Elm. Because I can’t get enough gold. Or West Elm.

Rug: Is it weird that I want to hold out on getting a rug of any kind until I can buy one in Morocco or Turkey or somewhere equally exotic and known for peddling rugs? Right now I’m kind of obsessed with Moroccan boucherouite rugs. I love the textures and the mix of bright colors. You know, like pink and teal…

Cabinet: Kanpur cabinet from Pier 1. I’m not looking at this exact cabinet. But I have a short wall that needs a cabinet. I have a lot of books that I need to put somewhere but don’t want to be seen. Not pretty books but books about HTML and stuff that I want to keep but don’t want to be seen. I already have a bookcase for books that make me look well-read and well-traveled. Anyways, this was just an example of the global-inspired furniture.

Pouf: I bought this Morroccan leather poof in gold from One Kings Lane when it was on a super sale and for the past two months, before my couch arrived, it was the only place to sit in my apartment. Now it makes a beautiful little footstool. And a place to sit when I’m not eating on my couch.

Chair: I’m in love with the Flutura Occasional Chair from Anthropologie. It’s the perfect mix of modern lines and eccentric pattern. And the bright pink with teal accents would tie everything I own together perfectly. Unfortunately, when I tried it out in the store it was a bit small and not very comfortable. So, for $500, umm…no. Not that I could afford a $500 chair even if it was big and comfy. But a girl can have a dream room, right? 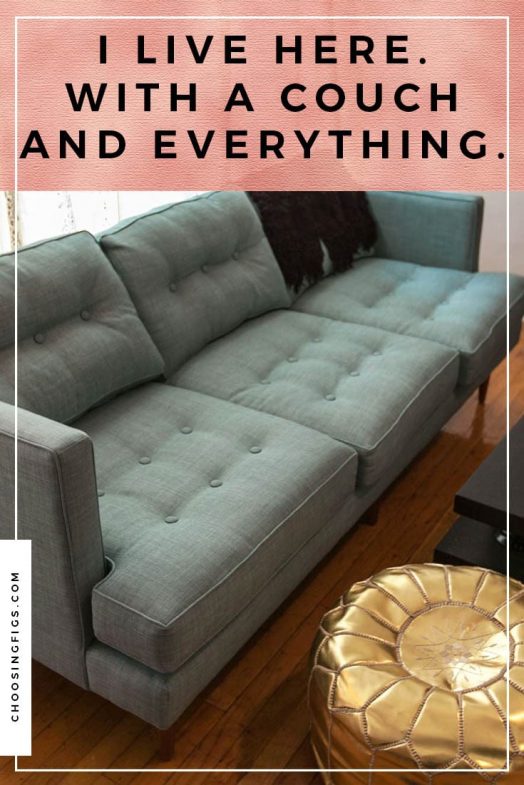 I live here. With a couch and everything. A new teal/aqua couch and a living room plan. 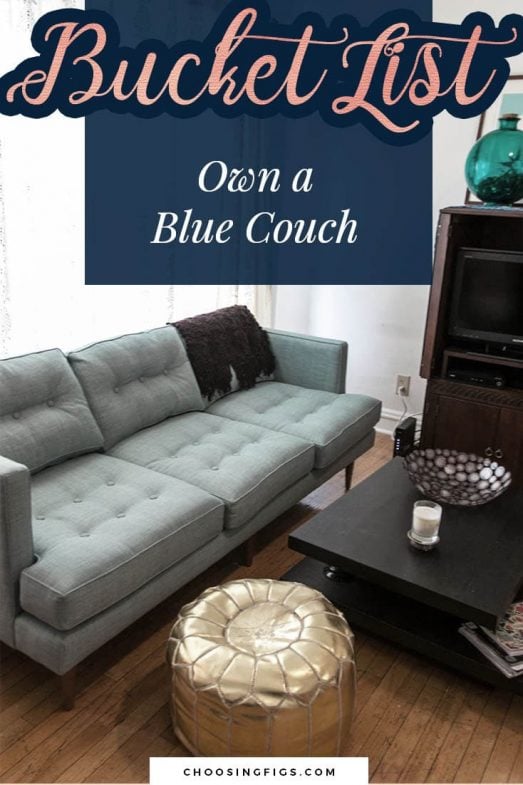 Bucket list idea: own a teal blue couch. | I live here. With a couch and everything. A new teal/aqua couch and a living room plan.

p.s. Have you binge watched Unbreakable Kimmy Schmidt yet????