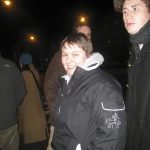 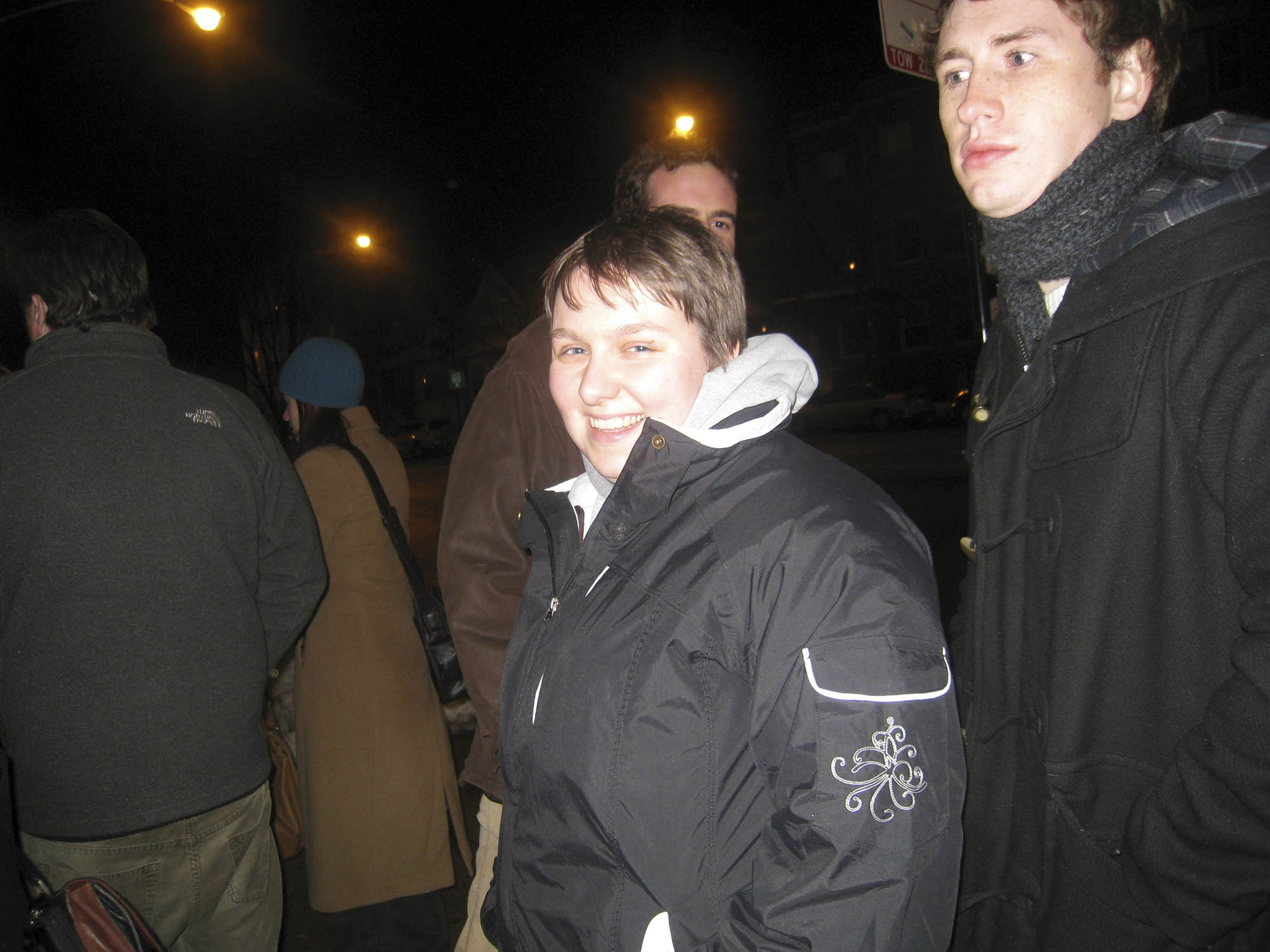 Headless firemen, or how preschool ruined my life.

Too Much Light Makes the Baby Go Blind

I went to preschool in a small brick building under the town’s water tower. I don’t remember much about it except for the one day we made chicken soup and the time the girls all sang the Jem theme song and the boys sang the Super Bowl Shuffle and that I used to carry around a notebook and come up with inventions all the time. I drew out sketches for a flying belt and for a huge building I wanted to build in the backyard to serve as a doll hospital.

I remember that we did these little demonstrations. Those things they make you do to learn “life skills” and so forth. One was for fire drills where I got in trouble for not putting down the toy I was holding. But really, wouldn’t it have taken longer for me to have put it down than to just carry it outside if it’s already in my hands?

There was another one I remember where me and this girl were playing with a shoe, and another girl came up to ask if she could play with us. I said “Sure,” and we all started to play with the shoe. The teacher then scolded me and told me that I was already playing with someone so I should have said no.

And I believed my teacher for way longer than I ever should have. That I was only allowed to have one friend at a time. And that moment single handedly ruined the rest of my life.

Saturday night I was going to drive to Champaign for Lindsay’s birthday. Turned out though that a) the baby shower I went to took me an hour in the right direction, but I then had to drive back an hour to drop off my mom, and that b) it went a little longer than expected and that c) JenP was in town and was making plans.

JenP (I need a better name for her. I avoid using last names, but I know two JenPs…JenP from Champaign…) called me up and said that people were going to see Too Much Light Makes the Baby Go Blind. I’d always wanted to see it but had never gone and I never see Jen so I decided to just stay in Chicago and go out with her. Plus I still had some work to prepare for today’s web launch so it was a little better for me to have the next morning. (Sorry Lindsay! We’ll party it up again soon!?!)

I met up with Jen and Andrew and JoeJoe and Alina for dinner. We were going to go to a pizza place but ended up at another restaurant that wasn’t so crowded. I got meatloaf because on my birthday I was torn between the fish and chips and the meatloaf and got fish and chips then. I forgot to take a picture of it though. We ALL ordered alcoholic beverages and the waiter looked around our table and said “I need to see…ummmm…” his gaze lands on me, “your ID.” Well, he got the second oldest at the table…

After we finished eating we headed over to the theatre. We got there wicked early and were the only ones in line and the doors wouldn’t even open for an hour. It was cold and so when we found out Andrew’s friends who were just around the block at Hopleaf so we decided to meet them there for a few.

So we went into Hopleaf, where they carded all of us, and met Bobby1 and Bobby2 (they shall be ordered in the order I met them). There was a sandwich on the table that belonged to neither of them, but they still were eating the fries anyways. When I saw it I thought it was a really knarly looking steak on the plate, but turns out it was rye bread.

I ordered a Duchesse, which I had had a couple of times before at the Blind Pig. I like it because it tastes more like wine than like beer. Bobby1 tasted it and said it tasted like mustard. That cannot be true as I HATE mustard.

So Jen was antsy to go and I tried to chug it down, but as we all know I can’t chug alcohol. But I got close enough to finishing. So I left what was left.

So we all left and went to the theatre where there now was a very long line. I gave JoeJoe my extra hat to wear because my superhood was enough. 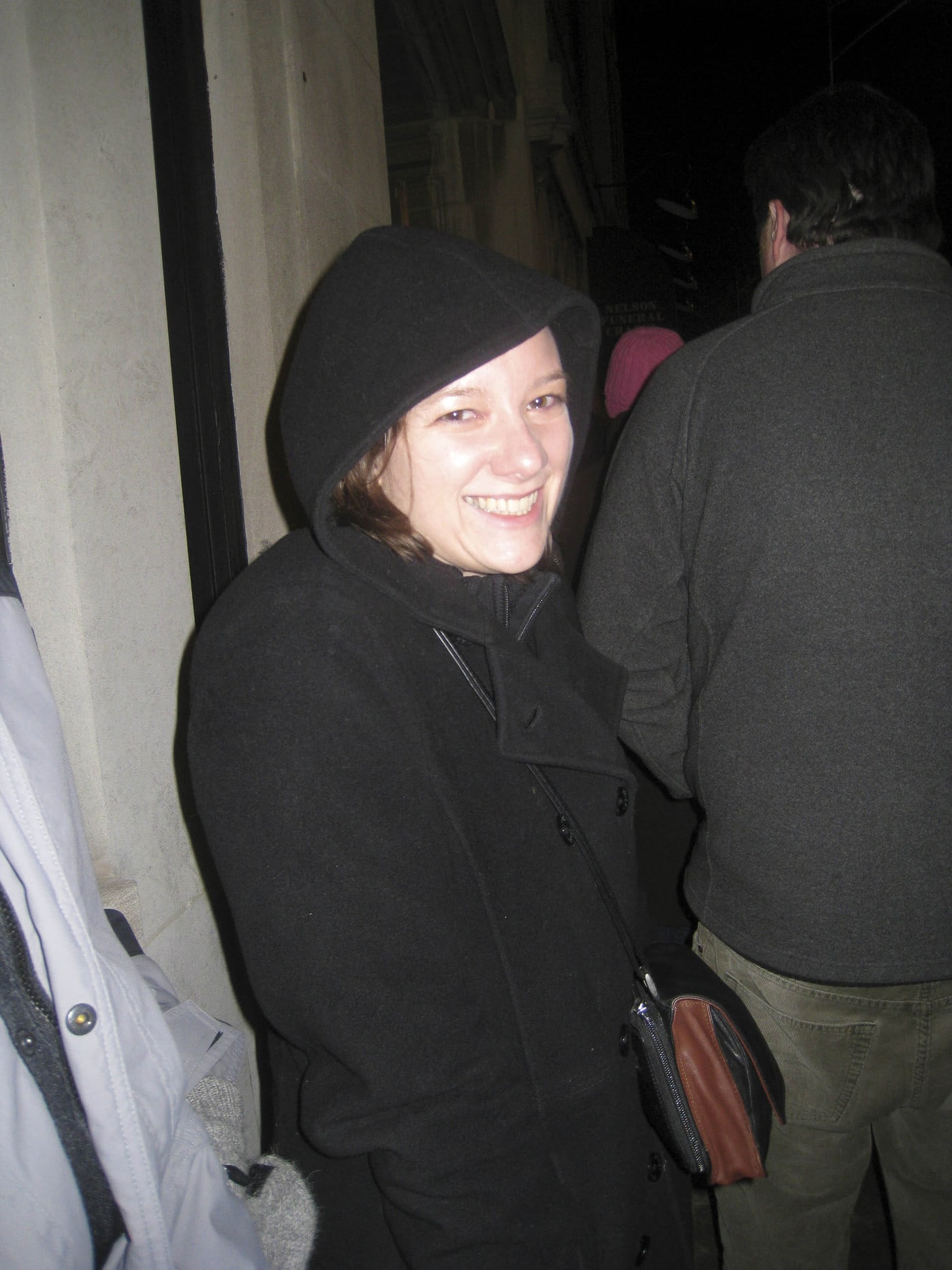 So finally the line started moving and everyone was given a little fireman toy which meant you were allowed to get in (as there are no tickets ahead of time). My fireman had no head. Bobby2 couldn’t decide if his fireman was holding a rifle or if someone had chewed off part of a hose. I later discovered that mine looked the same (except without the head) so it was either a rifle or a really pathetic hose. Or whoever had mine had chewed off both the head and the hose. But why would a fireman need a rifle?

Finally they started letting people in so we all lined up to pay. The show costs $9 plus whatever your roll of the dice brings. I rolled a 2 so I had to pay $11. Then they ask your name and they give you a nametag with something completely different written on it. I was “kiddo,” because apparently everyone thinks I look 12 🙂 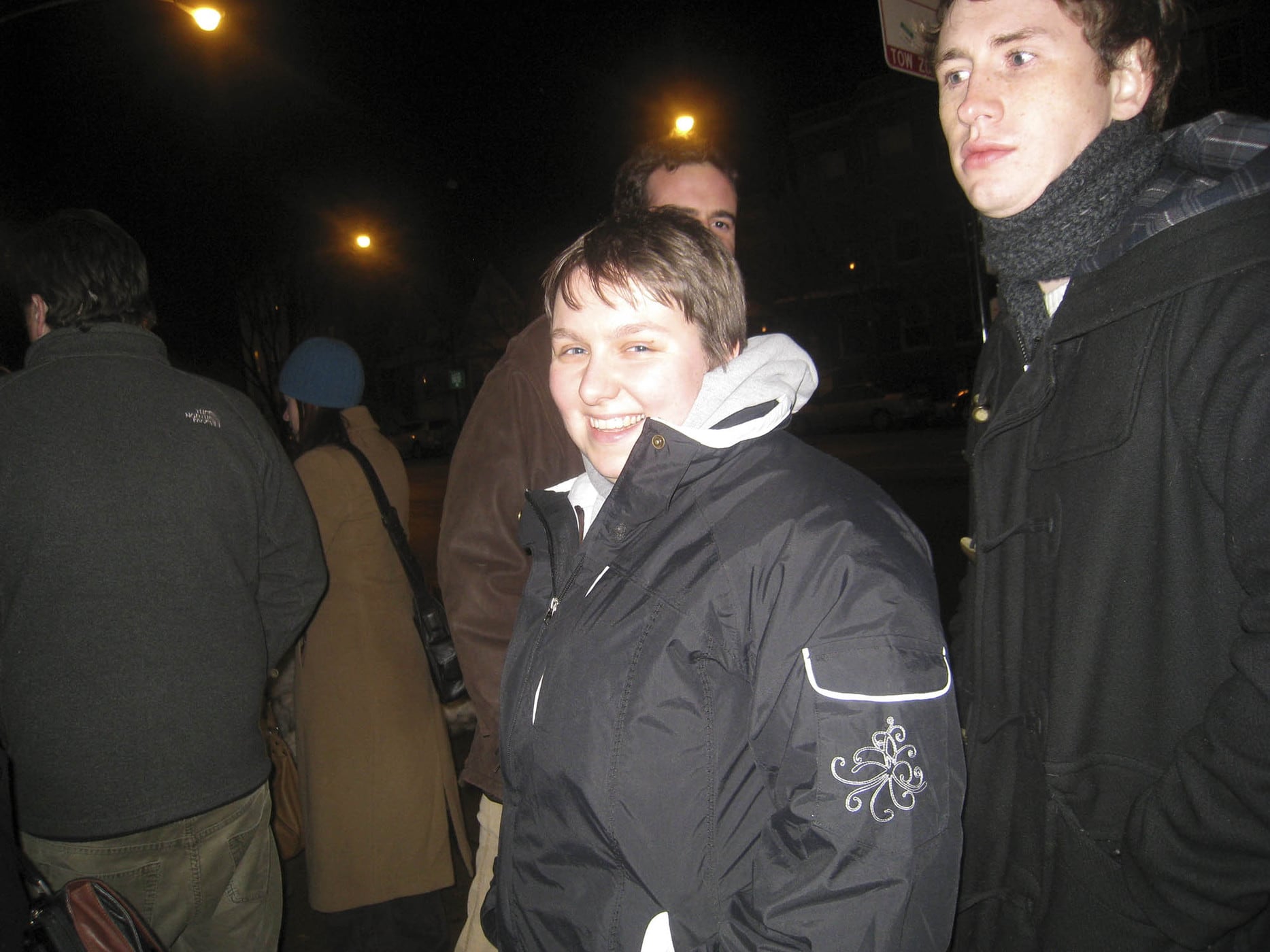 So I was the last of our group to get in, which of course means I stood there looking around forever until I saw where everyone was sitting. So it was a really small theater, but I still didn’t see them right away…and then when I did it totally looked like there was no extra seat next to them, so I thought they had left me out 🙁 Of course, the seat on the end was actually free I was just blind.

So, I wish I was better at talking to people I don’t know. I swear, I am either the quietest person you know or the loudest. But I was sitting on the end next to Bobby2 and I felt bad that I didn’t say more because he seemed like a really nice person. But I am way too shy sometimes. Dear Val, work on that. 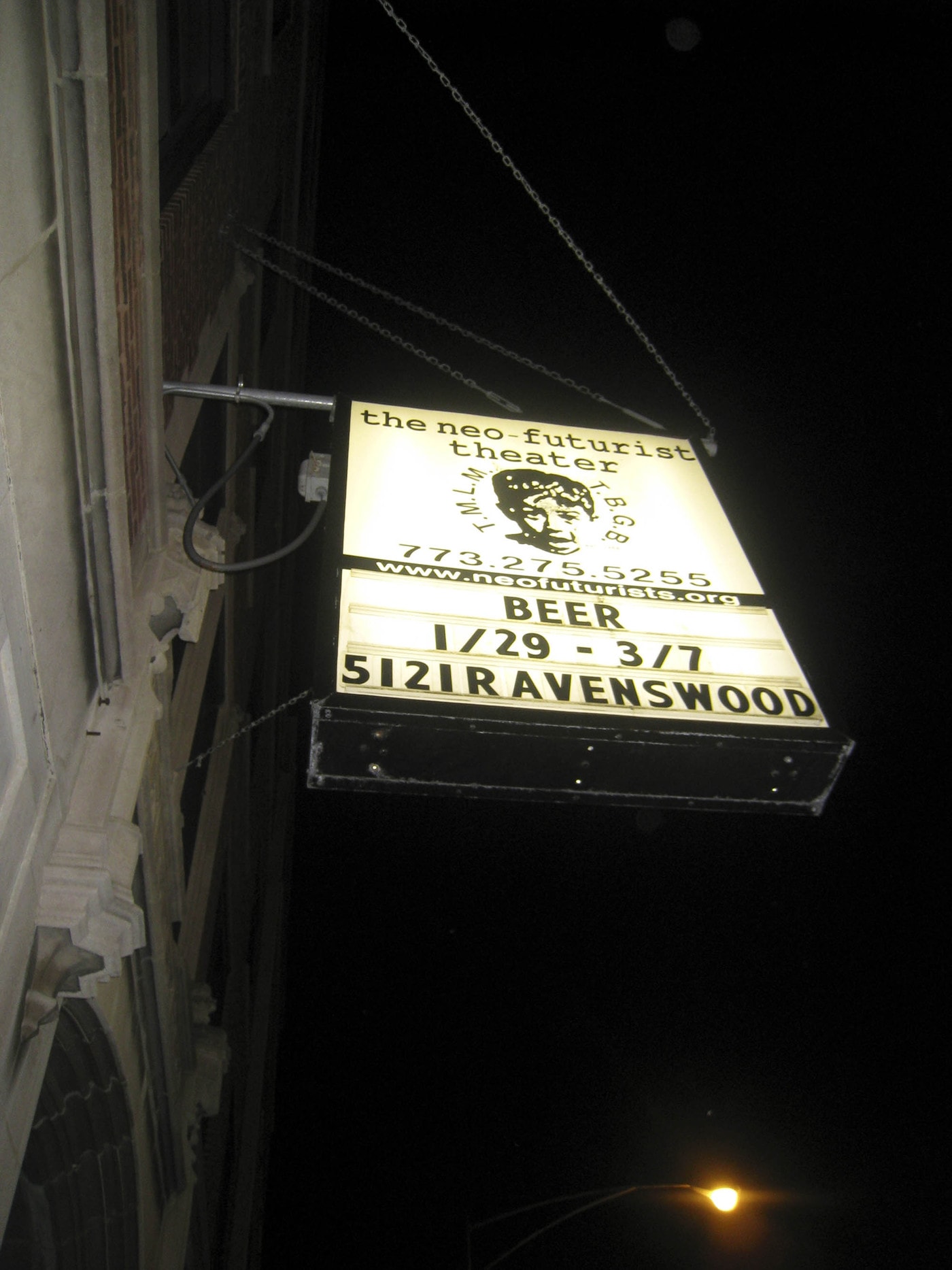 When the show was about to start they announced that there was a full house and therefore they would order pizza for the entire audience. So they put a phone on the microphone and called takeout. They ordered one large (for 150 people) and when they asked what we wanted on it the whole audience at once started yelling out toppings. 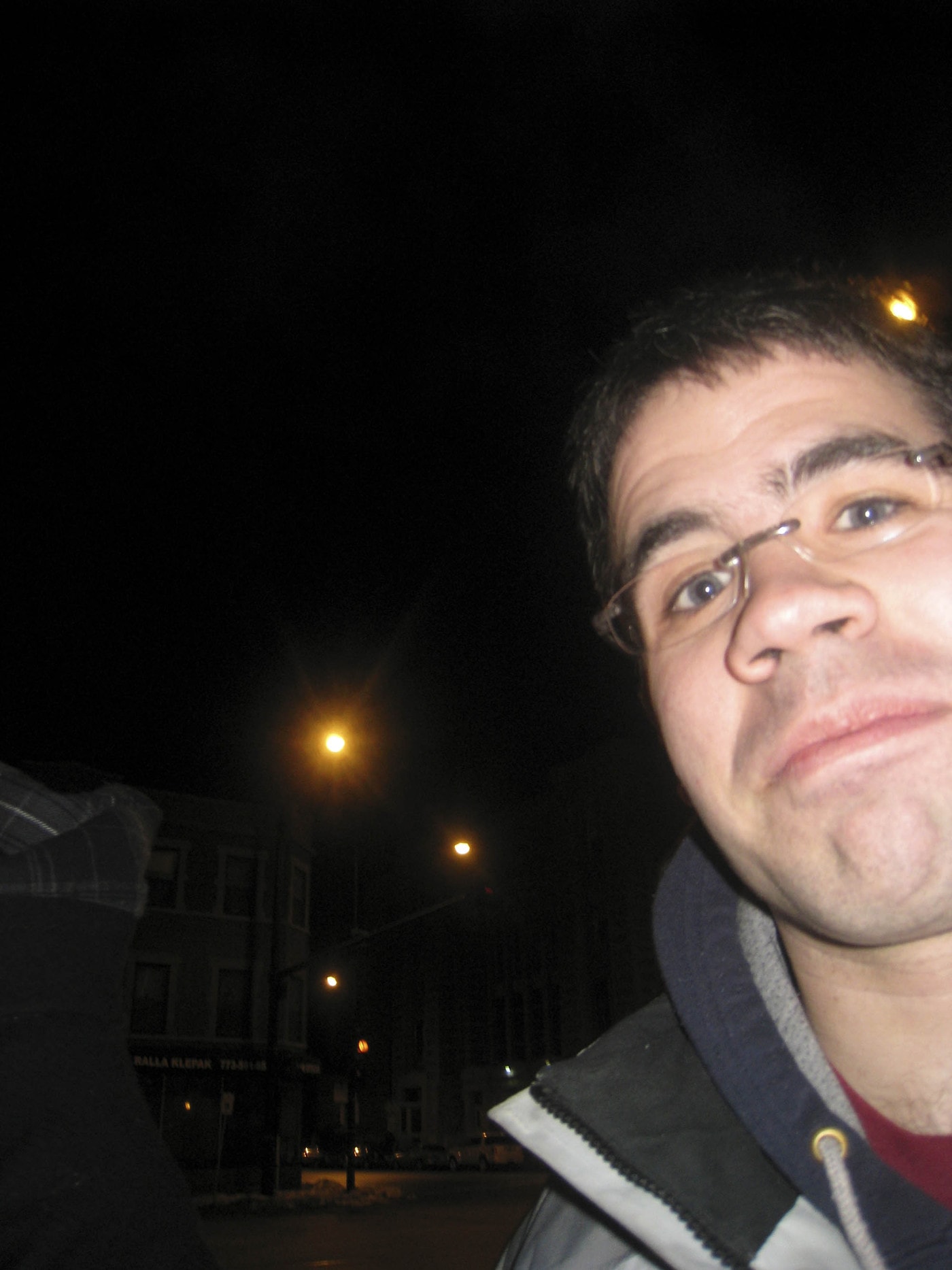 The concept of the show was awesome: 30 plays in 60 minutes. Each play had a number and they did the plays in order of whatever number they heard yelled from the audience first after the previous play had ended. I won’t remember all of the plays, but here are a few that I remember…

They asked for all the GLBT people in the audience to stand up. They then proceeded to bring out free snacks and sodas and (candy) cigarettes for them. JoeJoe later remarked that Jen and Andrew should do that at their wedding.

Revenge of a Theatre Major consisted of one sentence: “Ha, I still have my job.”

There was no number 15, it was replaced by a picture of Obama with his eyes cut out. This ended up being a mask that one of the actors put on and then beat the head of an actor with a Bush head on with a plastic bat.

There was one where a guy was pushing a rock around with his head…then was joined by other people pushing other objects around with their heads. Then they all started suggestively dancing with their objects.

So, yeah. It was one weird-ass show. But it was awesome. 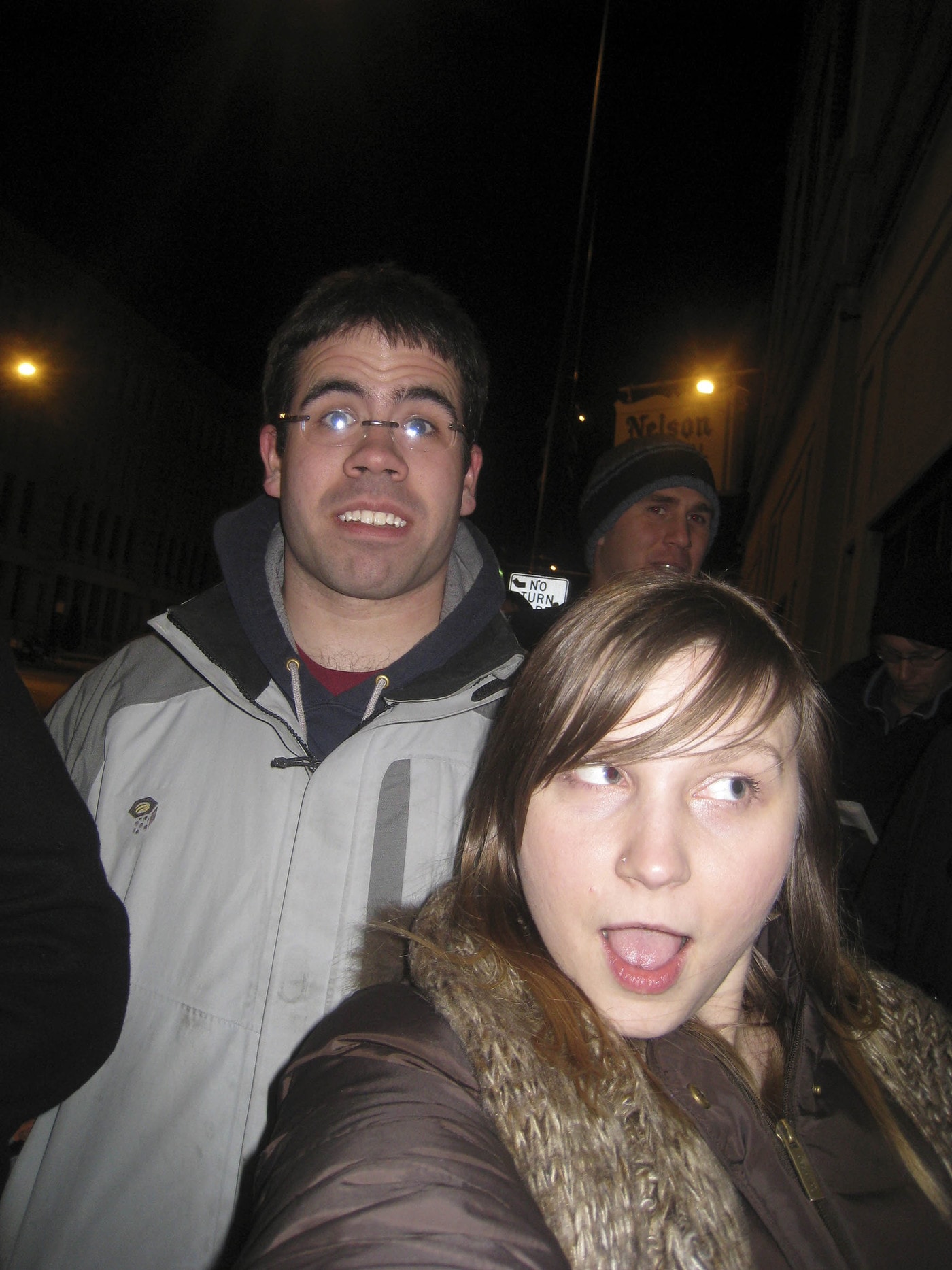 At the end they served the pizza. The slices weren’t even an inch by an inch but it was still good. And that was awesome too.

in childhood, theatre
by Val Bromann
Stop the World

Next post
The best year old cake I’ve ever eaten…