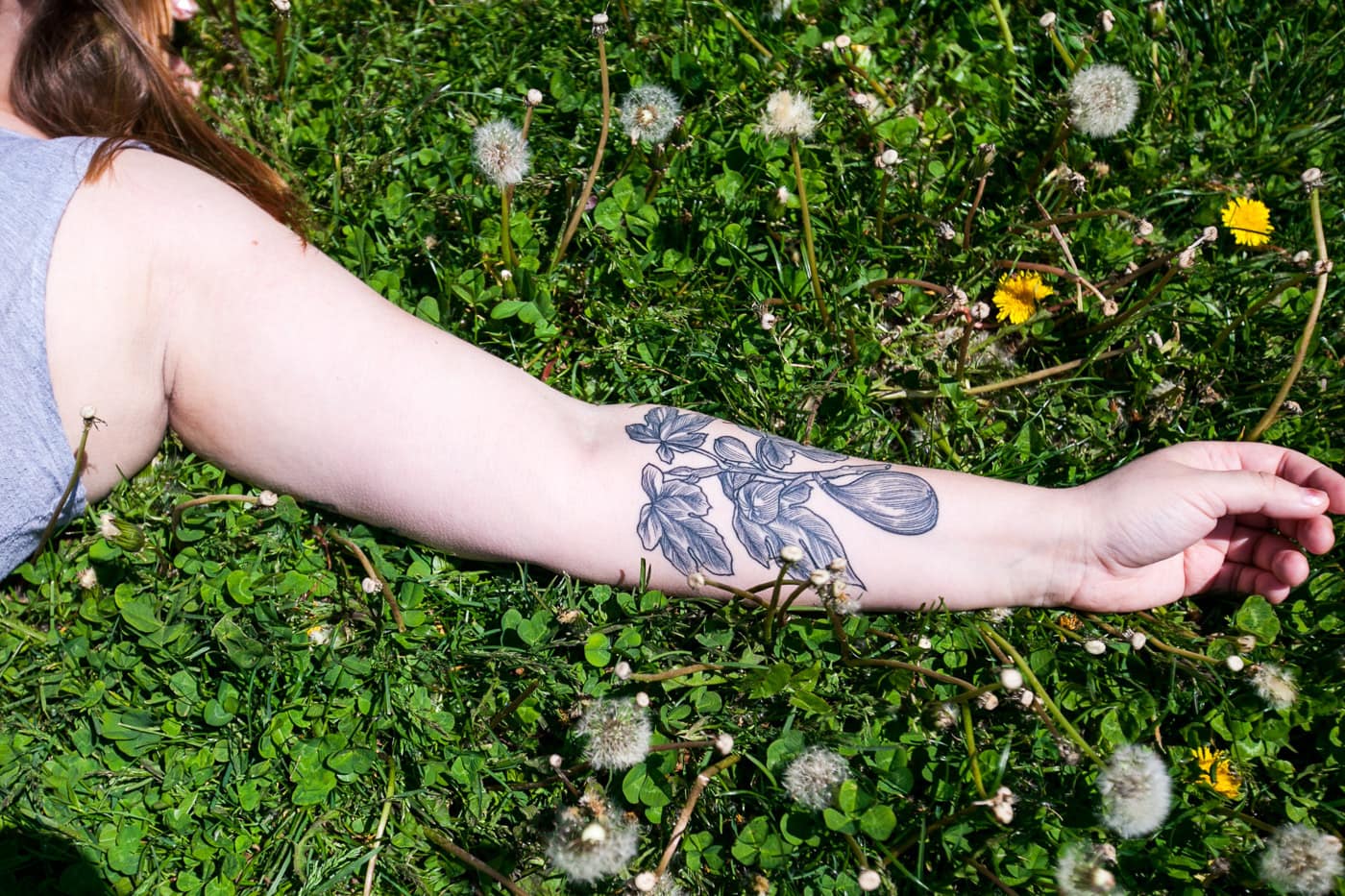 What I do remember is how I felt when reading it. Empathy. Commonality. Haunted. Never before had I read something that so accurately described what it was like to live inside my head. 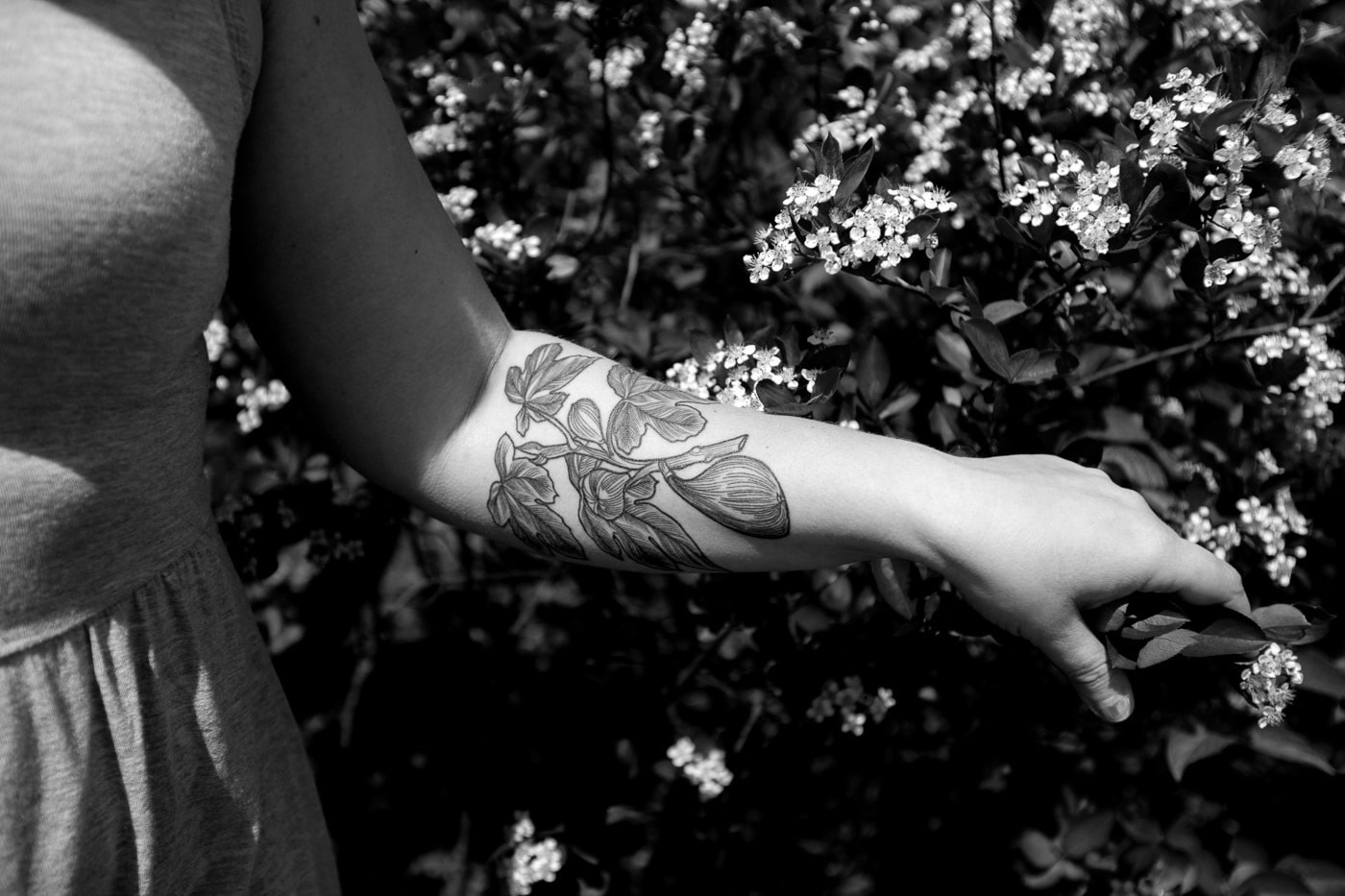 I also remember when I decided I wanted to get a fig tattoo.

It was 2012. I was in my hostel’s garden in Chiang Mai, Thailand, when someone said to me, “you should get a tattoo before you go.”

It wasn’t as silly or as out-of-nowhere a request as it may sound. I had spent the past nine months in Asia. I had spent probably three of those nine months in that very hostel. And I had spent my time there befriending the tattoo artists from the attached shop who would hang out in the garden and play pool. It was actually a sound suggestion. My time abroad was coming to an end. It would be the perfect memento.

I just didn’t know what to get.

There was one thing I often thought about getting as a tattoo. Every so often my mind wandered to my favorite quote from The Bell Jar, a quote that pretty much defined my life: “If neurotic is wanting two mutually exclusive things at one and the same time, then I’m neurotic as hell. I’ll be flying back and forth between one mutually exclusive thing and another for the rest of my days.”

Every so often, I contemplated a tattoo that read, “neurotic as hell.” It was a phrase, after all, that defined my life. I wanted to travel but wanted a home. I wanted a husband but wanted my freedom. I wanted the security of a full-time job but the flexibility of a freelance career. I always was debating between two mutually exclusive lives.

I was, am, and probably always will be “neurotic as hell.”

But, I was hesitant. Mostly because I’m not really sure I like tattoos with words (which is also why I avoided what is probably the most famous Sylvia Plath quote from the novel: “I am, I am, I am.”). And, despite not having any religious inclination in my soul, having the word “hell” inked on my body still seemed weird.

I still felt, though, like I wanted something, some symbol that encapsulated that idea.

So, not having a copy of the novel with me in Thailand, I took to the internet. I looked up other quotes and symbolism and that’s when I discovered the fig.

I saw my life branching out before me like the green fig tree in the story. From the tip of every branch, like a fat purple fig, a wonderful future beckoned and winked. One fig was a husband and a happy home and children, and another fig was a famous poet and another fig was a brilliant professor, and another fig was Ee Gee, the amazing editor, and another fig was Europe and Africa and South America, and another fig was Constantin and Socrates and Attila and a pack of other lovers with queer names and offbeat professions, and another fig was an Olympic lady crew champion, and beyond and above these figs were many more figs I couldn’t quite make out. I saw myself sitting in the crotch of this fig tree, starving to death, just because I couldn’t make up my mind which of the figs I would choose. I wanted each and every one of them, but choosing one meant losing all the rest, and, as I sat there, unable to decide, the figs began to wrinkle and go black, and, one by one, they plopped to the ground at my feet.

In retrospect I have no idea how I ever glossed over that passage. Since the first time I read the novel, I had read it several times over. I even had bought a copy in Belgium and had reread it at the beginning of that very trip. I’m sure I read the passage, saw it, thought about it. But just never dwelled on it.

I brought the idea to my tattoo artist friend and asked him if he could do a fig tree tattoo on my upper arm. He looked some things up, came up with some ideas, and we looked at them together. Nothing seemed quite right though. I wasn’t really happy with anything he showed me. Maybe that was just me being neurotic. But it was more me being realistic. I knew at that moment that I had to get this tattoo, but I also knew it needed to be big, prominent, calculated, and this just wasn’t quite the right time or place for it.

I had him instead tattoo a Superman insignia on my wrist, and added “get a fig tattoo” to my life list for later.

I’ll let you in on a little secret: figs are kind of ugly. Whole, they’re squat and dark and wrinkly and flaccid. Cut open, they can look like a vagina. So, as much as I symbolically wanted this fruit permanently inked on my skin, I’ve been pretty hesitant to ever make the commitment.

But the idea stuck with me all the same. I always told myself that someday I would get this fig tattoo on my arm. And then, last summer, for whatever reason, I looked at my bare forearm and said to myself, “I need to make this happen.”

So, again, I took to the internet. I scoured websites for tattoo shops in Chicago (and, really, anywhere) to look over portfolios. I obsessed over Instagram searches and followed any artists I liked the work of. I made my list of criteria.

I just didn’t want to end up with a vagina on my arm. 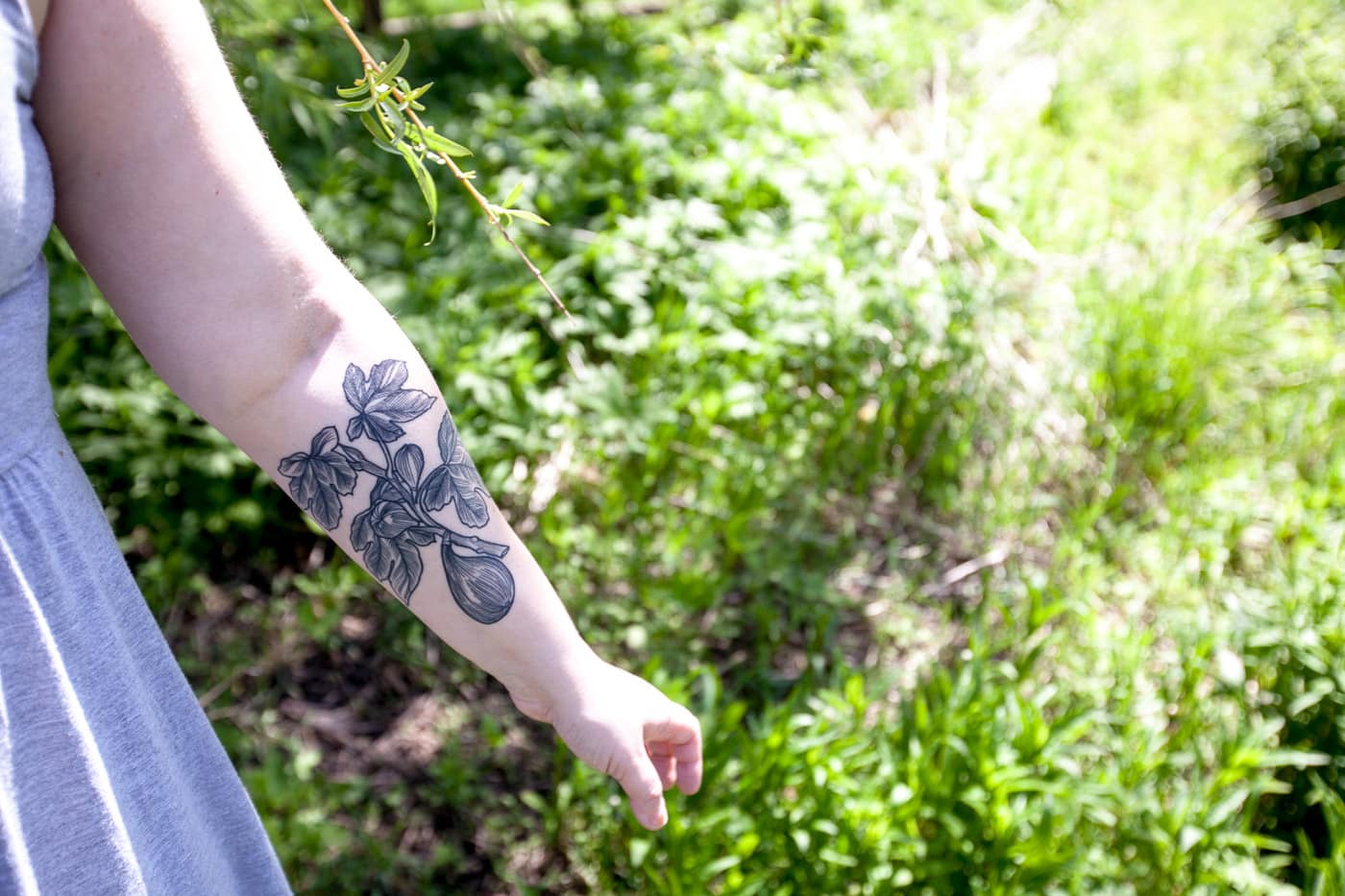 I kept a close eye on a handful of tattoo artists whose work I really loved, ones who I thought could do my idea justice. One of those artists was Tine DeFiore of Black Oak Tattoo. She only works in blackwork, her lines are incredible, she tattoos a lot of flowers and leaves, and even had a few examples of fruits and vegetables on her portfolio. Plus, bonus, her shop is in Chicago.

So, when her books opened last October, I sent a message asking for an appointment, thoroughly expecting rejection. But she replied not long after, enthusiastically, and scheduled me in…for April.

So I sent a deposit, I marked the date on my calendar, and, I waited. (And, maybe, got some bird tattoos in the meantime…)

Five years after standing in that hostel garden in Chiang Mai and deciding that I wanted a fig tattoo, a Sylvia Plath tattoo, a Bell Jar tattoo, I got one.

And it’s more beautiful than I ever imagined it would be.

And it fits me more than anything else could. 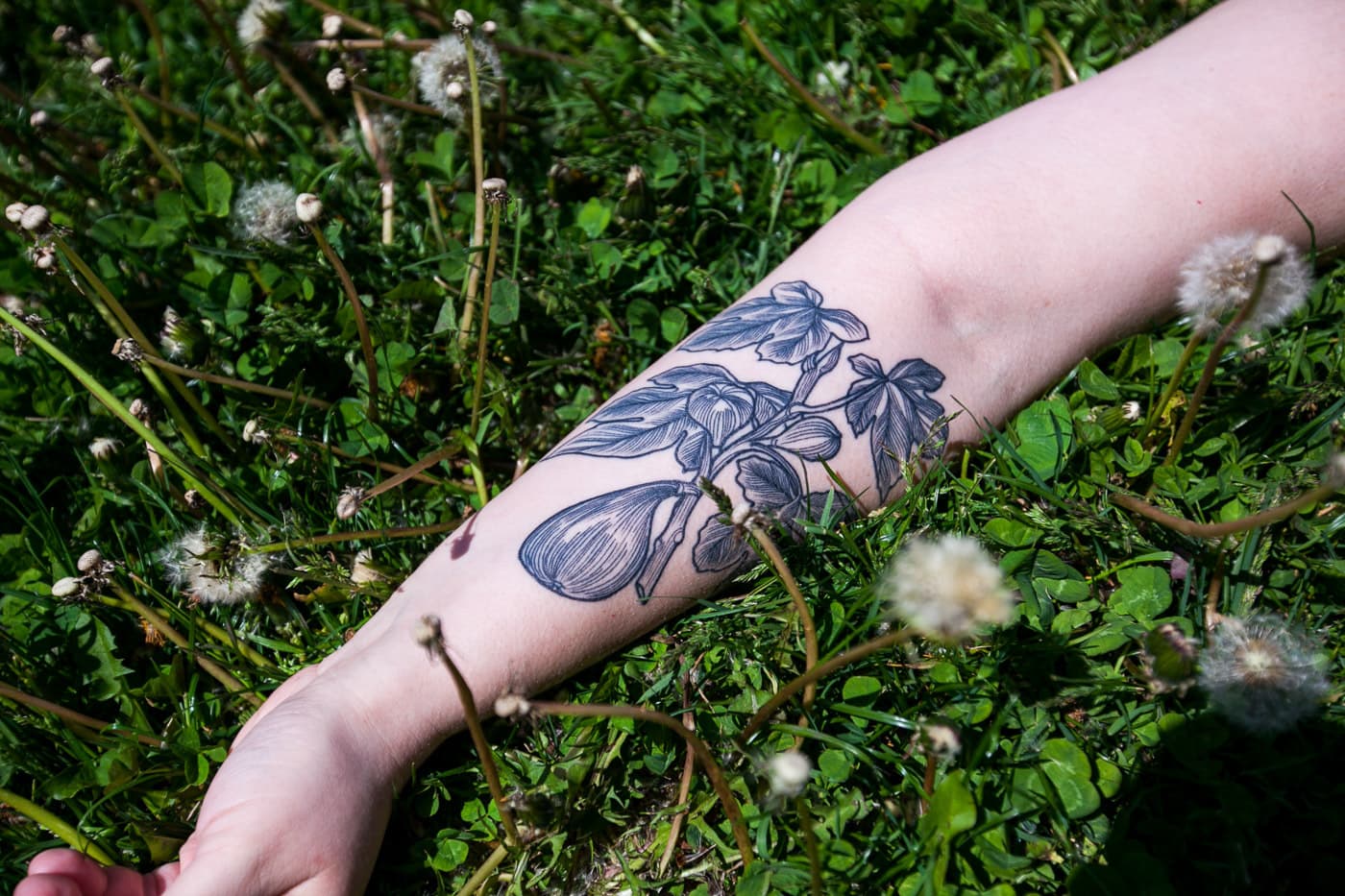 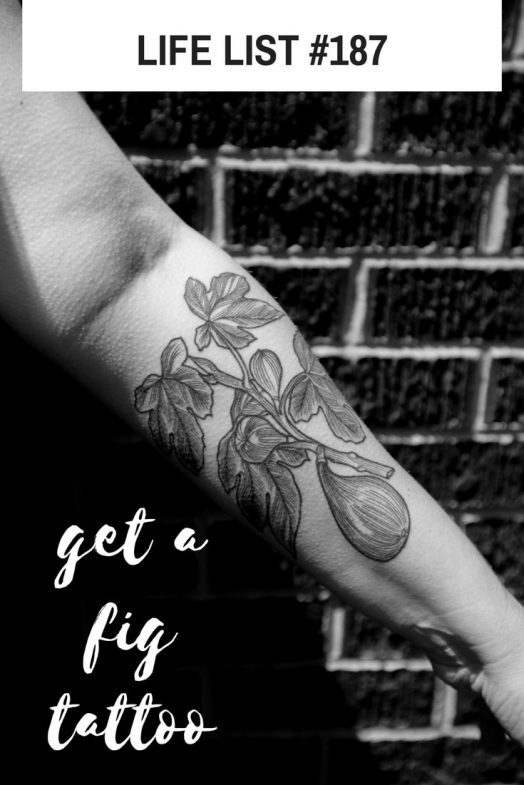 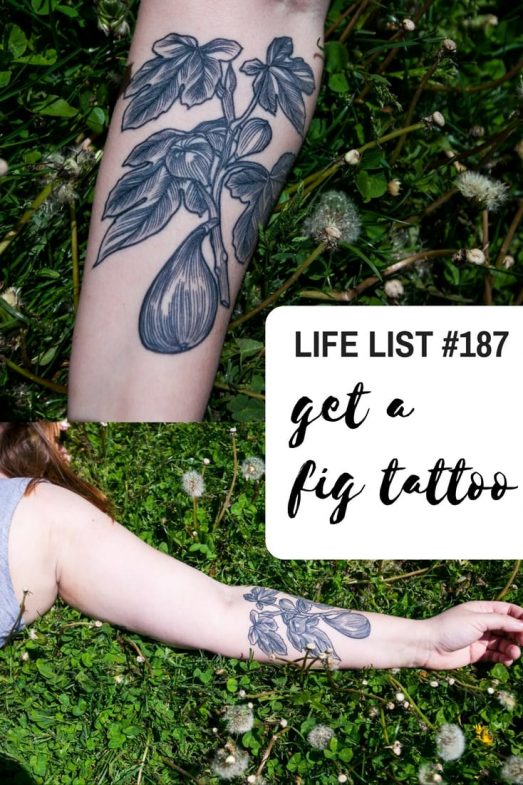