Fellas, after my experiences today, you’re gonna have to do a lot of work to live up to my expectations of what a man should be…

1. JoeJoe, Glen and John
I went to lunch with JoeJoe, Glen, and John because they were all in town at the same time. With those cuties, can it get any better? Damn straight it can!

2. Romeo
After lunch I headed off to the dress rehearsal for Roméo et Juliette at Lyric. It was a really good performance, but was funny because it was a dress rehearsal… Yeah, at the beginning these two chandeliers covered in fabric came down and these guys were supposed to unwrap them. Well, one of the guys didn’t make it in time so the chandelier went up leaving a huge piece of fabric draping over the stage. They lowered it later in the scene and got it off finally and everyone applauded. Later they stopped Juliette in the middle of a song and had her start back a bit. Alas that is what dress rehearsals are.

The opera itself was beautiful and those artists are so talented. I cried at the end (UMMM, SPOILERS AHEAD IF YOU LIVE UNDER A ROCK AND DO NOT KNOW THE PLOT OF ROMEO AND JULIET YET STILL SOMEHOW HAVE INTERNET) because as they were dying they kind of reached their hands towards each other to hold but didn’t have the strength to make it. You know, that whole, For saints have hands that pilgrims’ hands do touch thing? It was sad. I guess I just have a thing for holding hands. it is one of my favorite things to do if i have the right person to do it with.

3. Bond, James Bond
So, nothing seemed to be going on so I bummed my way into seeing Casino Royale with Andy, ScottyMcHotty, DerekMcHotty (they are brothers so they obviously have the same last name), KennyK (same), Rob, and some other peeps. This is despite the fact that I have only ever seen one Bond movie before all the way through. The movie was really good and entertaining, but it kind of seemed to end like 20 times before it actually ended.

I also am probably the only person who had this problem with the movie because I guarantee a grand majority of the people who read this blog will have no clue what I am talking about. But anyways… this new Bond guy looks so much like Clinton Kelly from “What Not to Wear.” I swear. See: 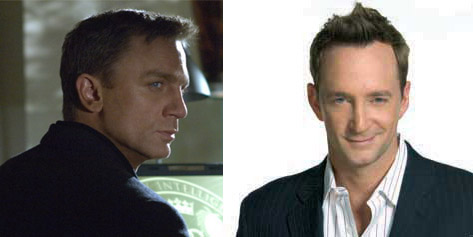 See? Yeah, I am sure you don’t and you now think I am even girlier for watching shows like “What Not to Wear.”

Anyways, Bond is still pretty damn hawt. And he’s got a great body. And he looks like a good kisser. And he is really strong. Mmmmhmmm.

Next post
Valerie’s Employed and Ready to Celebrate Celebration!