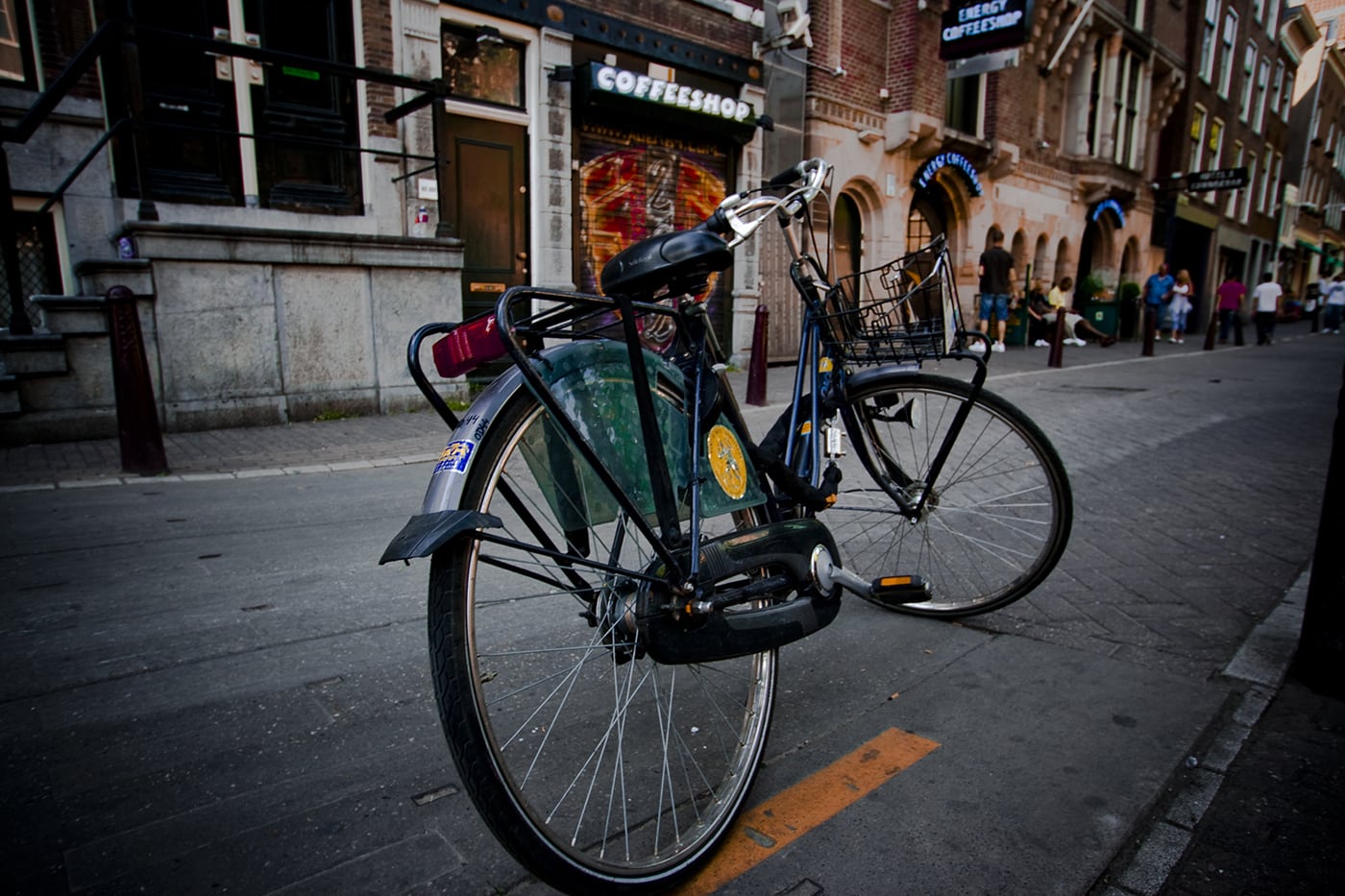 This morning was the great Amsterdam bike experiment. I rented a bike and immediately recognized that it was a bad idea. Everyone bikes in Amsterdam and I thought that it might solve my biggest dilemma: getting lost. I figured that I would still get lost but at least with the bike I’d find my way back sooner. But actually it made things worse. I had to make too quick of decisions. I had to turn before knowing which way to turn. I had to figure out where I could and could not be and when it was safe to cross a street.

So after going in circles for a bit and finally finding my way back to the square I retired my bike chained outside of my hostel.

By that time I was so dehydrated I felt like I was foaming at the mouth. I bought a water from the machine and took a breather in the hostel lobby. Luckily Paul, a guy who claims one of 10 beds in my hostel room (the room does in fact hold 12 people though as two of those beds are doubles) was walking by. Paul’s from Canada (I didn’t say Canadia there) and is also traveling alone. We decided to take a walk and find some lunch, finally settling on an outdoor cafe. I got a salmon sandwich because I remembered Jason had told me to get one, although I completely forgot to look up where he’d said to. It was rather tasty. 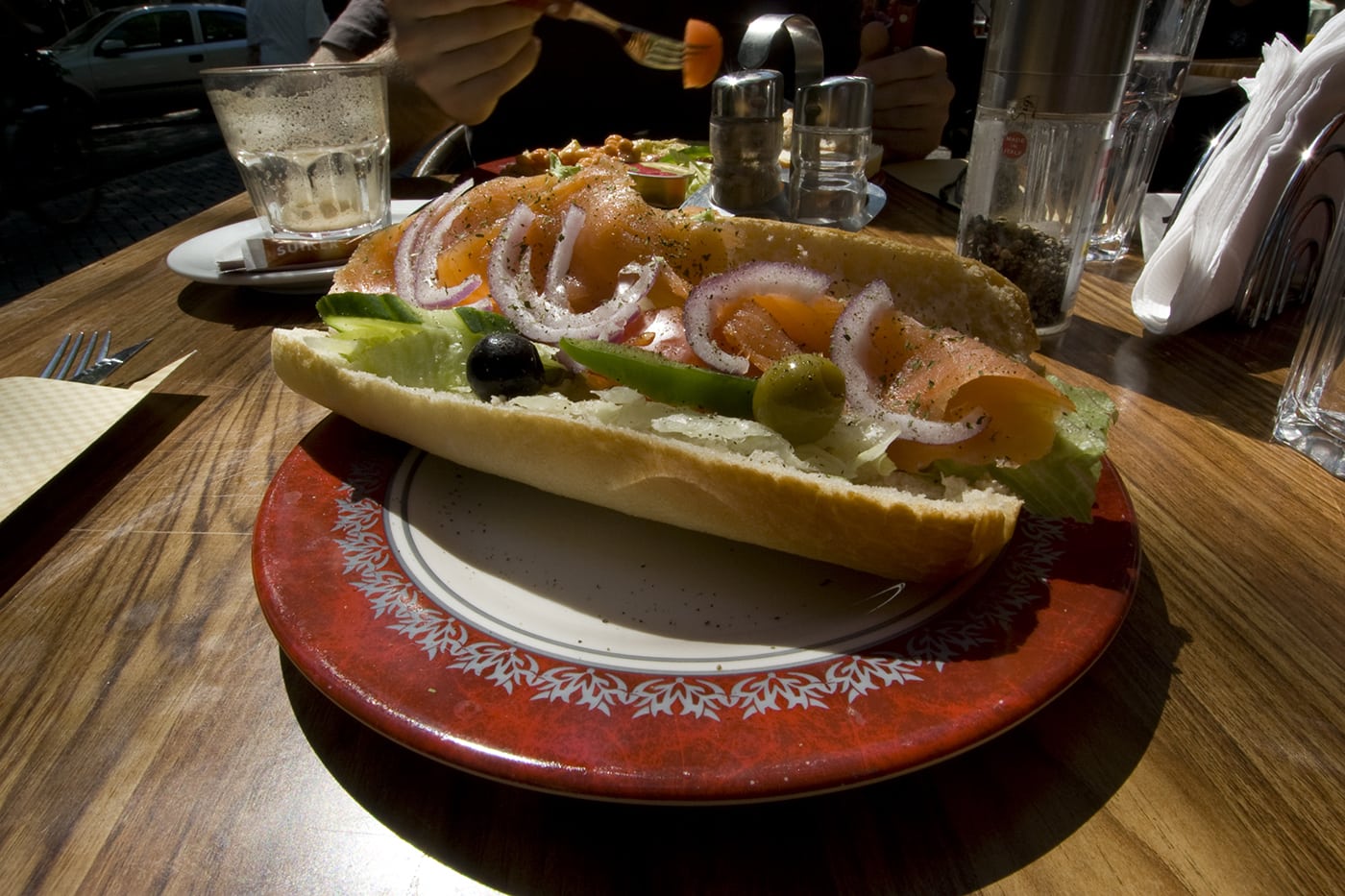 After lunch we had a lazy day of wandering the city and making our way back to Vondelpark. On our way there I saw the most awesome thing ever: a boat with a claw whose purpose was to dig at the bottom of the canals for fallen bicycles. We saw him grabbing one and saw that the boat already contained quite a stack of them. Those bicycles are everywhere and a lot of people only chain the tire to the bike instead of chaining the bike to something stable, so I’d imagine a lot do fall in or are tossed in by pranksters. 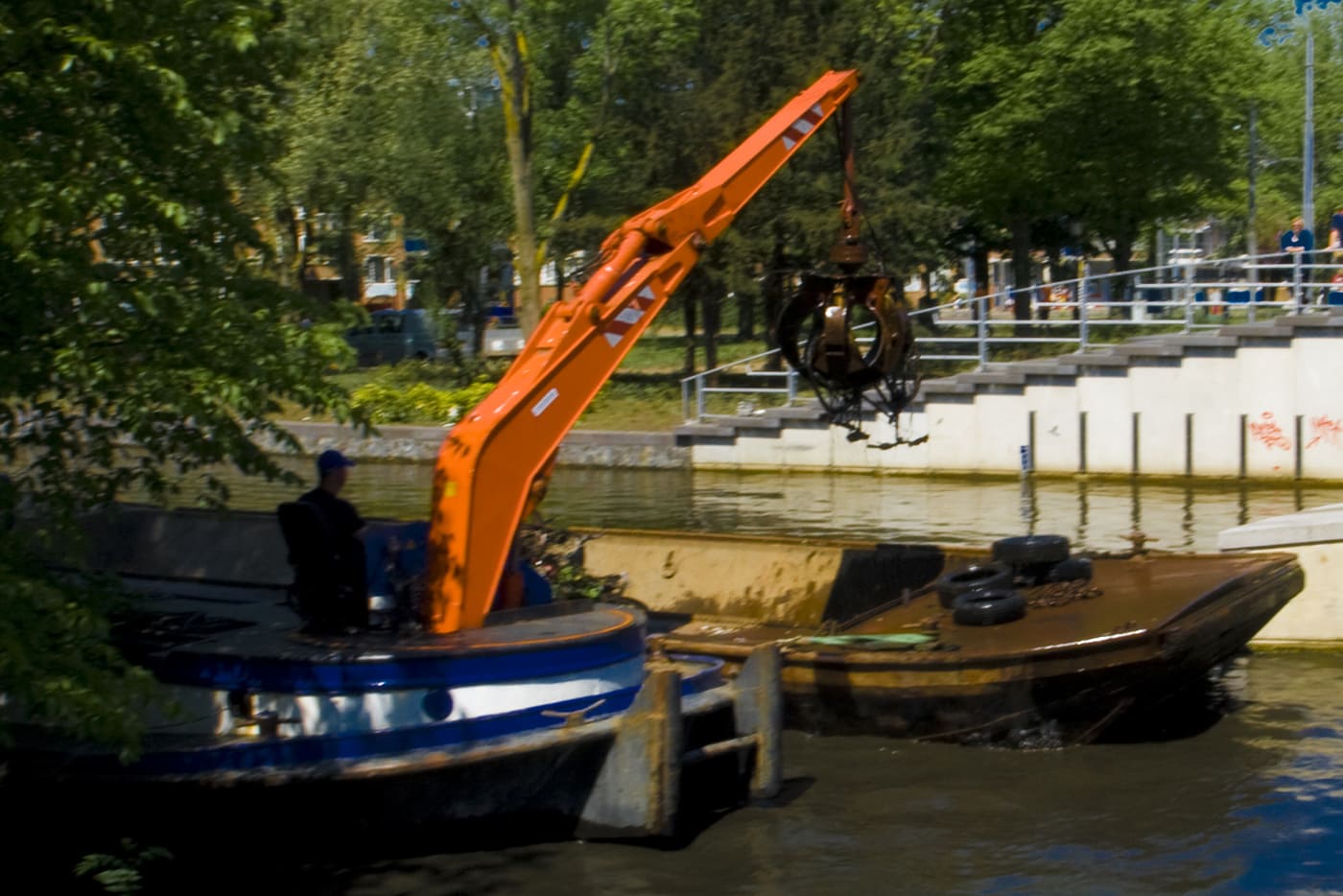 Luckily I convinced him that we should hit up some Indonesian food for dinner and we set off to try some rijsttafel. Let me tell you, rijsttafel is pretty much the most amazing meal you could ever imagine. Our table was COVERED in food. Basically they bring out a lot of different things to try. We had twenty-some dishes of varying degrees of heat. There were differently prepared vegetables and beefs and chickens and two types of rice. Delicious. After dinner we headed back to the dam to sip some coffee and then parted ways. 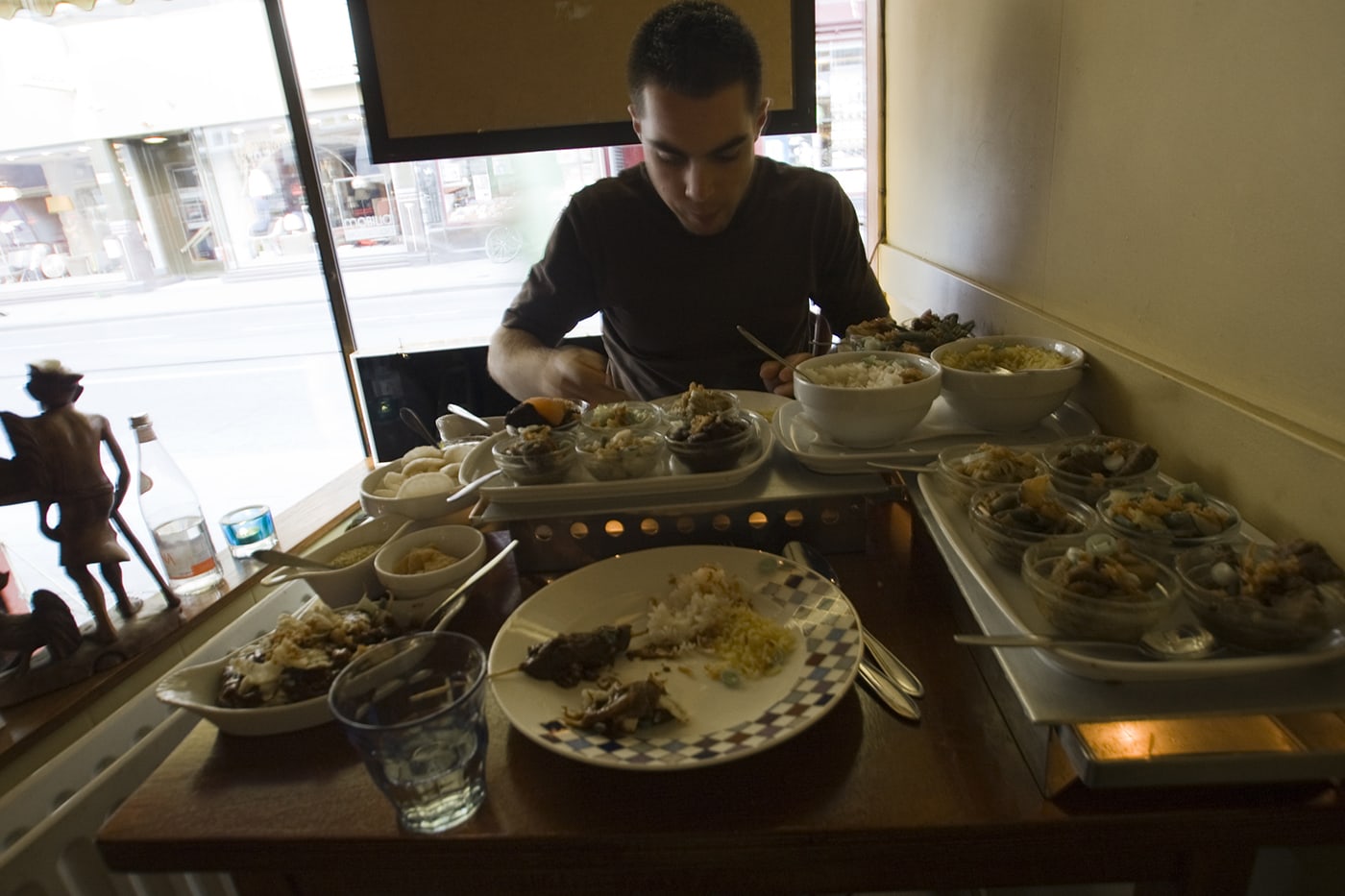 It’s lonely. At home I am perfectly fine staying at home for a night doing nothing. But here, its lonely. I decided to find a brown cafe (a traditional Dutch pub) to sit and have a drink. Alone but at least out.

I found a suitable one, supposedly the “king of brown cafes” in my travel guide and set out to find it. I walked. And I passed bar after bar and wished I had friends to drink with as I saw people sitting outside and laughing and talking. I almost gave up looking but just as I was about to turn around it was there in front of me.

I am not the type to drink alone. And I’m not the type to go to a bar alone. But here I am, sipping strong genever (gin) from a filled-to-the-brim glass. According to the Dutch elders who sat down at my table ladies don’t usually drink genever and definitely don’t drink it straight. I guess we know I’m not really a lady.

I’m going to continue writing because I still have half a glass left and want to sip it slowly and want to look busy. It tastes good which I am surprised at because I don’t usually take my alcohol straight. It tastes spicy. Amsterdam has done something to my taste buds because all I drink is Heineken and I go through glass after glass with no problems and now am drinking a drink most people don’t even like and I can’t get enough,

I finished my drink. I like this place. Everyone in here, and its not that many, are all certainly Dutch. There are others outside, but in here they are Dutch. The lady at the bar looked at me funny and smiled when I ordered the genever. I sometimes feel like guidebooks just fuck you over and tell you things that you really shouldn’t do.

Maybe I should just go to the hostel and get high. I’m scared to do it with strangers and I’m scared to do it alone. But I don’t really know who I am anymore and I don’t know if that’s a good thing or a bad thing. I wish I could split in half and be two different people with two separate lives.

There is a cat walking down the stairs. 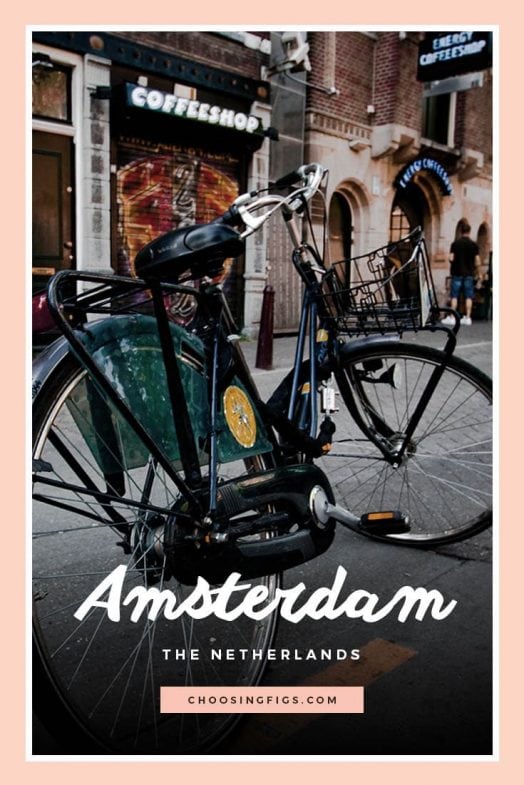 Renting a bicycle in Amsterdam, the Netherlands. 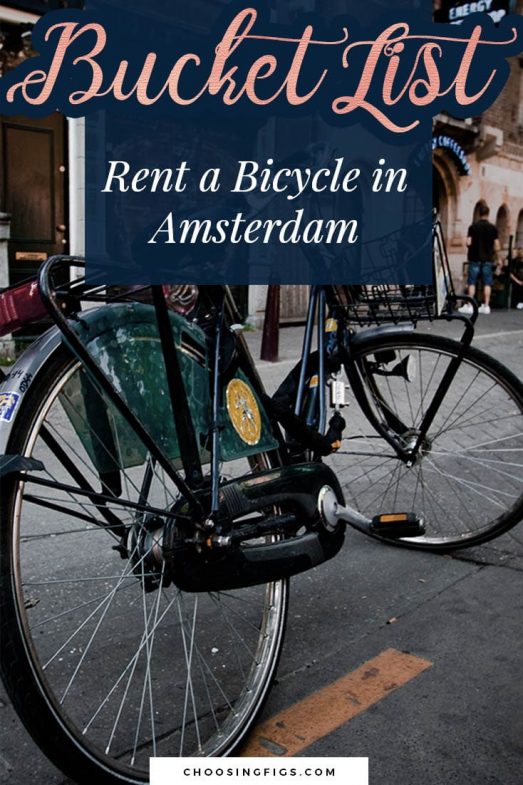 Bucket List Idea: Rent a bicycle in Amsterdam, the Netherlands.

Next post
Amsterdam: Day Three, Part Two (A Drink at a Bar)