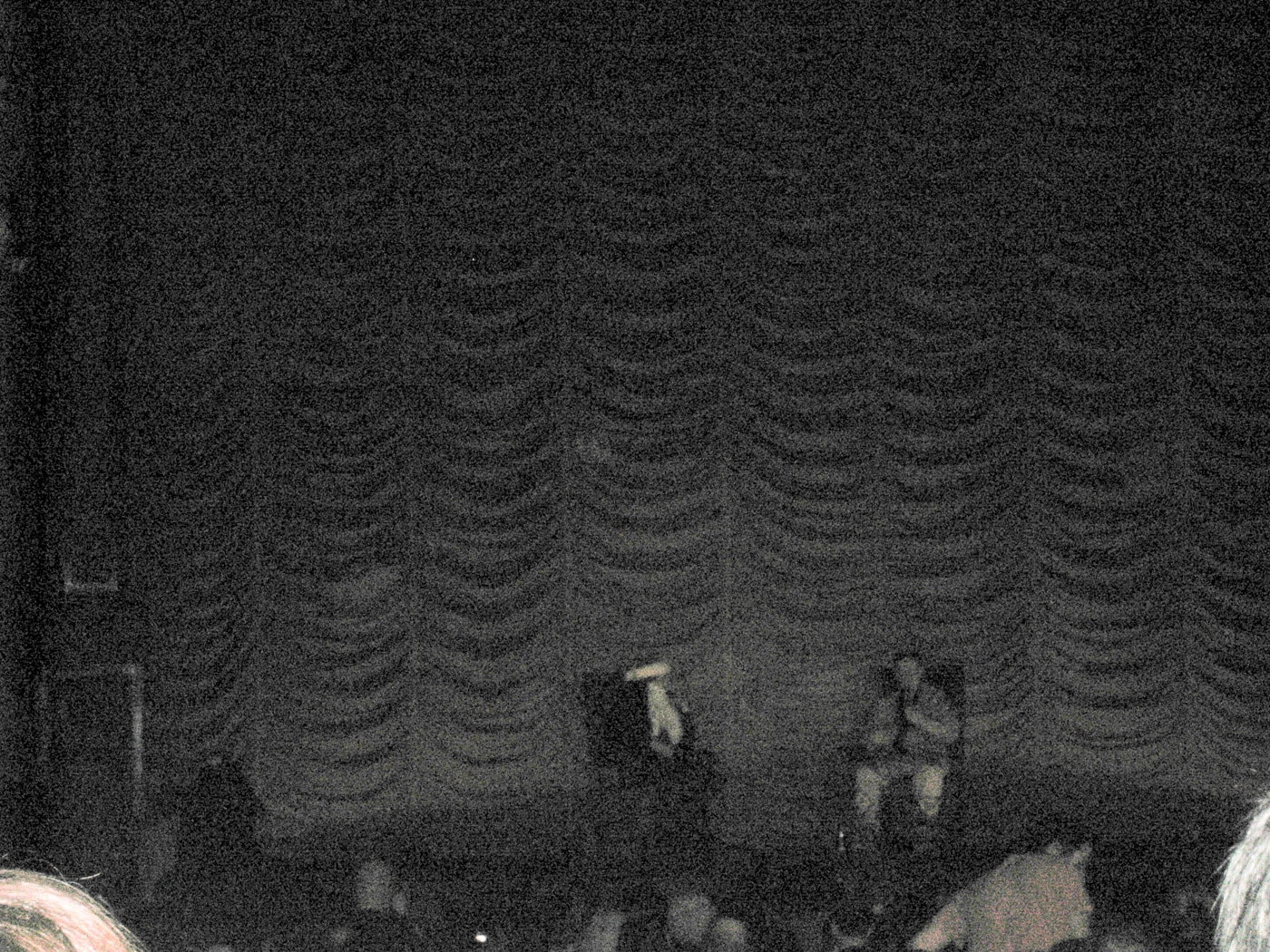 Music Box Massacre at the Music Box Theatre in Chicago.

I hope this is a somewhat coherent post…I’m going on 37 hours without sleep right now after the Music Box Massacre at the Music Box Theatre in Chicago. I’m pretty damn tired right now…and my whole night is kind of a blur of horror-filled awesomeness…

Saturday I woke up around 8:30am and headed to a wedding photography seminar. I am now apparently shooting my first wedding ever in December. Eeek! The seminar was a good overview of some things I need to start thinking about. But sometimes these seminars are annoying because the guys giving them don’t do images or a workflow that I know would be my style at all. I also determined that it is probably not a good idea for me to shoot weddings because all the happy pictures of happy couples make me cry.

Anyways, enough of that.

Afterwards I hopped in my car and headed to the Music Box Theatre for “Music Box Massacre 4!” I was so excited to go because I never got the chance to go before and I wasn’t planning on going this year because I couldn’t find anyone who wanted to/could go with me. Luckily, Chelsa swooped in and is now my new partner in crime for going to see crappy horror films.

I arrived at around 5:30. It had started at noon but my class ran till 4. The place was PACKED. By the time I got there they were already on movie number 4. Luckily the first three were older classic-type ones. I have nothing against those but I really am a fan of the so bad it’s good 80s slashers and such. I snuck in the theater during a movie called May and just sat down in the first place I saw.

Here’s a recap of my night. Times are based on the printed schedule, but I know they were running a bit behind, so it’s all approximate.

I didn’t catch the beginning of May, but horror films aren’t that hard to figure out. And I am almost certain I’ve seen it before but don’t remember if that is true or not. May is in love with this guy and has a doll who talks to her and a female coworker who wants to sleep with her and she kind of goes psycho. Parts of it were a bit too off the wall and melodramatic but overall it was very good. There was one scene in it where they were at the veterinary office and operating on a cat and I started feeling really light headed and faint. Great, thinks Val, first movie and I’m already sick. How am I going to survive the night? (Luckily I think it’s really only medical type things that I get really sickly over).

Before the movie I ran out and got some Raisinets. I actually was going to get pizza but the pizza line was huge and the candy line was nonexistent. I made my choice of dinner. I also managed to move down a couple rows and snag a pair of aisle seats to hold one for Chelsa who was still at work.

Midnight Meat Train was pretty good, although parts of the ending just seemed to come out of nowhere. (I hate explaining without spoiling). And I kept trying to figure out where I knew the main guy from (turns out nowhere) and where I knew the main girl from (turns out, Popular). I also kept thinking that the main guy was a photographer but his pictures were horrible and that he was shooting film and never once stopped to change a roll. It’s all in the details for me.

There were however some pretty great gore effects to this one. That was its biggest strength.

Chelsa came maybe a half hour after it started. She brought me a Coke which makes her even more awesome of a person. She asked what she had missed afterwards and the standard answer is always “A couple of people were killed.”

After the movie Clive Barker came out for a Q&A. I am happy he has opinions against the use of all this digitalized stuff going on now. I think all this newer CGI crap looks so much faker than using puppets and stuff. In my opinion.

I took a crappy picture. I swear Clive Barker and Santa Claus are in there.

So this was just a little short they showed. But it was fucking hilarious. I think it’s just a trailer for a nonexistent movie. But that was all it needed to be. I found it up on YouTube. I thought it was the funniest thing ever. Either that or sitting in a movie theater for four hours had already started messing with my head.

I normally hate it when movie theater audiences applaud at the end of a movie. But in a 24-hour horror marathon it’s kind of a given that everything possible will be applauded. For instance when Corey Feldman’s name appears in the opening credits. Or when Crispin Glover comes on the screen.

If you know me you know that Jason is my very favorite of the superslashers. He just is a lost little child who was never given a chance. And how can you not feel for him when he tilts his head at his victims like a confused little puppy dog?

Of course, it’s still awesome when you see him get his comeuppance. And this movie has one of the zaniest endings ever. Which makes it more awesome.

Did you like Lord of the Rings? Well, that doesn’t matter, but this movie was directed by Peter Jackson too. And it is way better. And has way more blood. In fact it is said to have the most blood ever used in a movie or something. And it’s awesome. (Let’s count how many times I use the word awesome in this write-up. I am way too tired to come up with a better descriptive. Who am I kidding, I never use better descriptives.)

Dead Alive is pretty amazingly awesome. And it’s funny. I already mentioned it has lots of blood.

It’s about a guy whose mother gets bitten by this crazy monkey thing and then she turns into a zombie and then she turns others into zombies and then everything goes wrong from there. And then they of course have to destroy all the zombies.

Let’s just say it’s awesome and you should watch it.

At this point I got popcorn and a coke because really I’d only had rasinets for dinner so far and thought I needed to balance out my meal.

This is one of the million and two takeoffs of Phantom of the Opera. Well, Phantom of the Opera meets Faust. Replace the Phantom for a scorned songwriter and Christine for a backup singer named Phoenix. And add in the devil. Throw in some seventies pop numbers and some glam rock and you’ve got yourself a movie. I actually quite enjoyed it.

Black Sabbath is one of those old 60s Boris Karloff flicks. Meaning it was slower and subtler (something most modern things don’t do) which in theory is good, but at 4am it means it starts putting you to sleep. This is when I need blood and guts and hoards of screaming naked chicks to keep you awake! Not thoughtful, well-construed story telling!

So I didn’t fall asleep, but I definitely felt myself nodding off and having to catch myself. Honestly I would have taken a nap, but Pieces was next and I love that movie and was determined to not accidentally sleep though it.

Pieces is an awesome movie that fits perfectly into my fav genre of so bad its good 80s slashers. The beginning is just the perfect scene where a little boy puts together a naked lady puzzle, is caught by his mom, and then the kid brutally massacres her. It’s one of those feel good moments that has you scream and laugh at the same time. Then you fast forward 40 years and someone is killing naked school girls. But who could it be?

Near the beginning I was starting to nod off a bit but by the end I’d hit my second wind for the night and was feeling fine.

This was, well, basically worthy of direct to video (or more likely free comcast on demand selection). It had Robert Englund in it. That was a plus. But there was really nothing special and it wasn’t that exciting of a movie. And the main character was pretty inconsistent. But it was busy enough to keep me awake.

If you don’t know the exorcist, well, where the heck have you been? Spinning heads, shaking beds, throwing up pea soup? It’s a classic and really well made and just the way to start a brand new day 🙂

By this time I wasn’t really tired at all anymore, but became aware that I had become completely unaware of the concept of time. I knew that it was 9:30 but I didn’t think of 9:30 as being “morning” and “bright.” I was still stuck on it being the night before.

Also by this time (actually by midnight) the whole theatre went from being standing room only to half empty. Lame. I mean, I paid $27 (although no one ever ever checked for my ticket) and I was getting the bang for my buck!

An apple a day. (Going apple picking in Illinois.)

Next post
An apple a day. (Going apple picking in Illinois.)